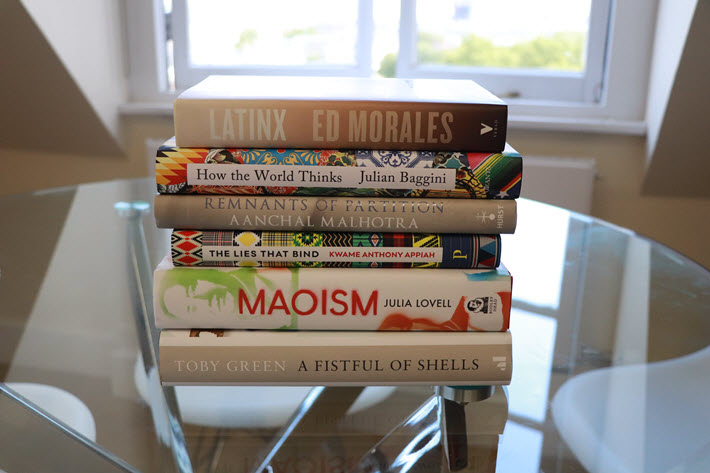 Urging readers to ‘look to other cultures to find answers’, this year’s Al-Rodhan picks are powered by thought from Africa to China, from Latin America to India and Pakistan. 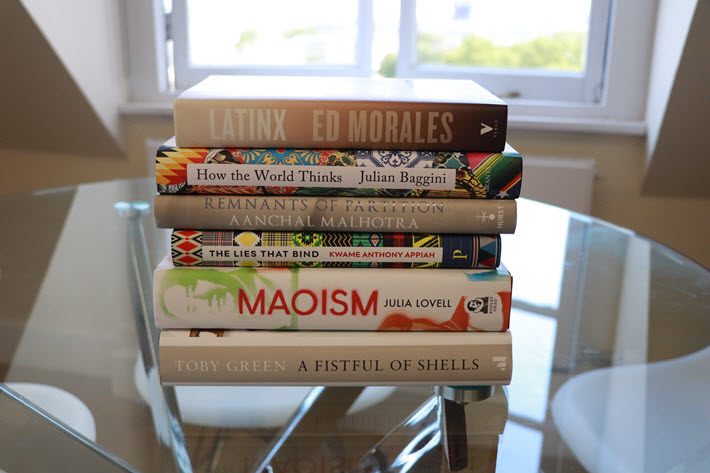 In London today (September 10), the British Academy is announcing the six-title shortlist for the 2019 Nayef Al-Rodhan Prize for Global Cultural Understanding.

The prize carries a purse of £25,000 (US$30,864) and is focused on nonfiction deemed to “contribute to global cultural understanding and illuminate the interconnections and divisions that shape cultural identity worldwide.” As Publishing Perspectives readers will remember, the prize was won last year by Kapka Kassabova for her Border: A Journey to the Edge of Europe published by Granta in the UK and by Graywolf in the States.

Drawn from more than 80 submissions, this year’s shortlisted titles again elicit talk of borders at a time when Brexit and the political chaos around the concept is so intense in the UK, British Academy president Sir David Canadine saying, “Each of the writers nominated for this year’s prize encourages the reader to trace the remarkable ways in which ideas are transmitted beyond borders, dynasties and ages.” 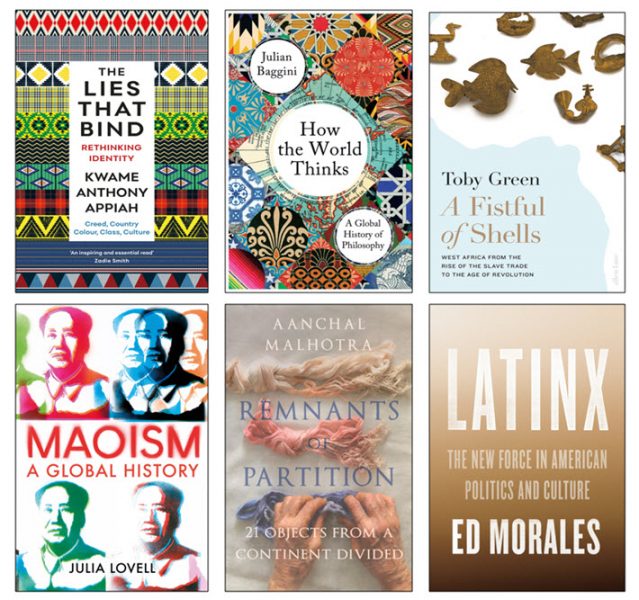 This year’s winner is to be announced on October 30.

In a brief comparative discussion of the six titles named, organizers of the award write, “Julian Baggini’s How the World Thinks: A Global History of Philosophy explains why world philosophies matter for global understanding, and Kwame Anthony Appiah’s The Lies That Bind: Rethinking Identity is an exploration of identities as made from cross-cultural engagements. Maoism: A Global History is Julia Lovell’s examination of Maoism as an international force.

“A Fistful of Shells: West Africa From the Rise of the Slave Trade to the Age of Revolution is Toby Green’s transforming history of West and West-Central Africa’s economic outreach to the world.

“In Remnants of Partition: 21 Objects from a Continent Divided, New Delhi-based artist and oral historian Aanchal Malhotra offers an alternate history of the subcontinent through memories of unity echoed around handfuls of items carried between the new India and Pakistan.

“In Latinx: The New Force in American Politics and Culture, Ed Morales addresses the impact of the 58 million Latin-Americans who now inhabit the United States and challenge its dualist black-white identity norms.”

To be eligible for entry this year, books had to be works of nonfiction published between March 1 of last year and March 31 of this year. Authors may be of any nationality, based anywhere in the world, and working in any language provided that the nominated work is available in the English language.

“It’s a shortlist which we hope will spark curiosity, promote dialogue, and inspire readers to look to other cultures to find answers to the big questions about the world today. These are the workings of great minds.”Ash Amin, jury chair

In a prepared statement, Amin is quoted, saying, “The jury has selected a shortlist of six exceptional books far-reaching in scope, purpose, and purchase.

“Each beautifully crafted book has been chosen for its meticulous and original research. It’s a shortlist which we hope will spark curiosity, promote dialogue, and inspire readers to look to other cultures to find answers to the big questions about the world today. These are the workings of great minds.”

And Canadine, in his remarks. says, “Such rigorous, timely and original nonfiction writing provides the rich context the global community needs to discuss and debate present-day challenges. Each of the writers nominated for this year’s prize encourages the reader to trace the remarkable ways in which ideas are transmitted beyond the confines of borders, dynasties and ages.

“As the voice for the humanities and social sciences, the British Academy is proud to celebrate the most illuminating examples of literature and academic inquiry that foster global cultural understanding. I wish to express sincere gratitude to Nayef Al-Rodhan for his role in establishing this important prize.”