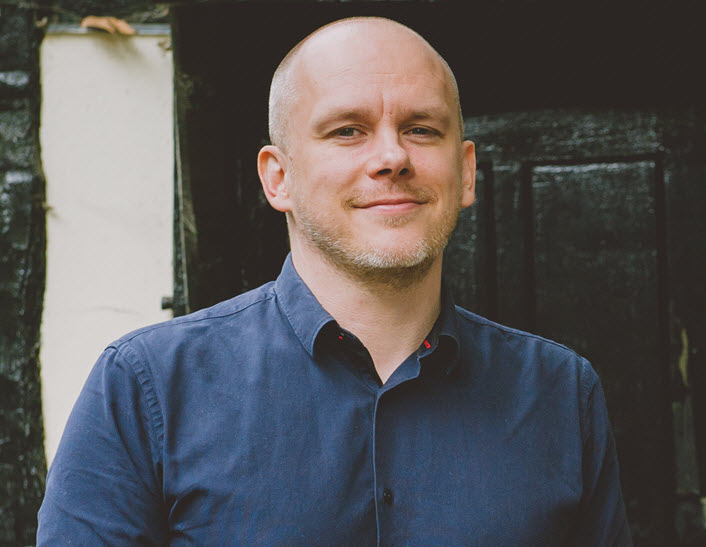 If you’re a publisher and would rather not use another company’s audiobook and ebook distribution, Nathan Hull at Beat Technologies says to listen closely.

Let’s say you’re the CEO of a fine publishing house and you’re watching with a certain amount of dread as a large and rapidly expanding audiobook subscription service announces that it soon it will open for business in your market.

Thanks to digital downloads, audiobooks are the same hot born-again format in your country that they are in so many parts of the world, right? You’re eager to get a piece of that action. But you don’t like the idea of handing your content over to a subscription service based in Stockholm or Seattle or Toronto that will act as your intermediary.

That platform will not only take a cut of your revenue but it also will own the relationship with the listener-fans of your authors, or the ebook-reading followers of that new trilogy you’ve just signed, or even the print copies you’ve thought about bundling with an audio offer.

Nathan Hull would like to tell you a fable—in Norway, that’s fabel, and you say it “FAH-bel.” It’s another offering from Frankfurter Buchmesse’s Guest of Honor Norway (October 16 to 20), and this one can be found in the new Frankfurt Audio area in Hall 3.1 at Stand K46. At 4 p.m. on Frankfurt Wednesday (October 16), the Beat Technologies will have a program for those interested on the Frankfurt Audio area stage.

It’s about two big publishers who decided to get together and let Beat Technologies create their own audiobook and ebook subscription platform for them. These are the titans of Oslo, Gyldendal Norsk Forlag and H. Aschehoug & Co. leaders among Norwegian publishing houses.

Their partnership is called Fabel, Hull says, “And it’s an audiobook and ebook subscription platform. It’s recently had a la carte downloads added, too,” so that customers can simply get audiobooks or ebooks they’d like to have but without a subscription.

Publishers ‘Deciding To Do Something Different’ 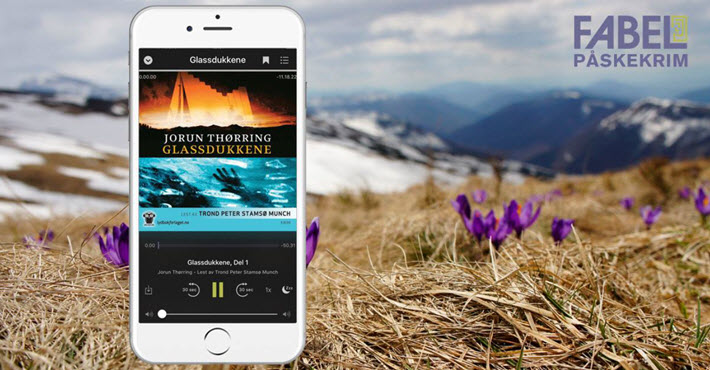 The Fabel platform was tailor-made to the specifications of Norwegian publishers Gyldendal and Aschehoug. Image: Fabel

Hull is familiar to many in the international publishing industry. He’s known for his work with Amsterdam’s Bookchoice, Denmark’s Mofibo (bought by Storytel), and Penguin Random House UK, where for more than four years he was digital development director. His background with years at London’s Universal Music Group  now are coming into play in his role as Beat’s chief marketing and strategy officer.

“Publishers want to have that dialogue with the consumer because at the moment, they don’t. Someone else sells that book for them.”Nathan Hull, Beat Technologies

“Gyldendal and Aschehoug came together,” Hull says, “at a time when lots of other retailers, other platforms, were looking at the Norwegian market and the success of the Nordic markets in audio. And these publishers decided to do something different.”

The platform they created with Beat, Fabel, now is Norway’s first publisher-owned subscription operation, a project that Beat’s team says now can be replicated from handshake to the market in only three months. The Norwegian Fabel was started with just 1,000 titles at the outset. A Fabel subscription today costs 169 kroner per month (US$18.75) and the platform is offering not only the two publishers’ own output but also material they bring in from international markets to translate and many titles in English, as well.

It’s gone well, too. The official number from Bergen is 50,000 paying subscribers, but Publishing Perspectives understands that there have been many new signups this summer, as well. And in a market the size of Norway–population 5.2 million–a cohort of even 50,ooo is significant, capturing roughly half the share of the Norwegian market for the format.

Those users are spending about 2 million minutes per day listening to audiobooks.

Of course, the real question that publishers from other markets may seek out Hull at Frankfurt to talk about is traffic: If you’re not a well-known online brand—not a vast technology company and retailer like Amazon, not an audiobook subscription service already in 16 to 20 markets like Storytel, not a Canadian powerhouse for ebooks like Kobo, can you draw the cyber-footfall you’ll need to sell your own audio online, whether by subscription or one-off a la carte sales?

Hull doesn’t minimize the importance of that question. The compact Norwegian market is a great one for Beat—founded in 2016 and now with a 30-person staff—to have started in. Not for nothing do Gyldendal and Aschehoug have a natural draw in Norway, commanding as they do the titles of some of the very biggest Norwegian names in literature. If you want their audiobooks in the home market, you go to Fabel to get them.

“What we’re offering here,” Hull concedes, “certainly can’t work for everyone. It’s a sizable task” requiring a strong marketing effort to inform a readership that a new publisher-presented platform is available. “They have to have a brand” of their own “or strong author brands to make people gravitate toward them.

“A consumer decision is going to be driven by a few factors. Price is one. And then ease and access are two other factors.

“But in addition, a publisher has to be willing to spend the money to draw the consumers in. But the marketing spend from these two publishers also doesn’t drive customers away toward any other retail platform. It drives them to their own platform.”

And one of the points Hull makes is that publishers—which have long labored in many markets without a lot of brand recognition of their own among consumers on the street—do have a chance to build name recognition for themselves if they decide to create a platform for their own digital sales and name it after themselves rather an opting for another name as Gyldendal and Aschehoug did in this case.

‘That Hunger for Data’ 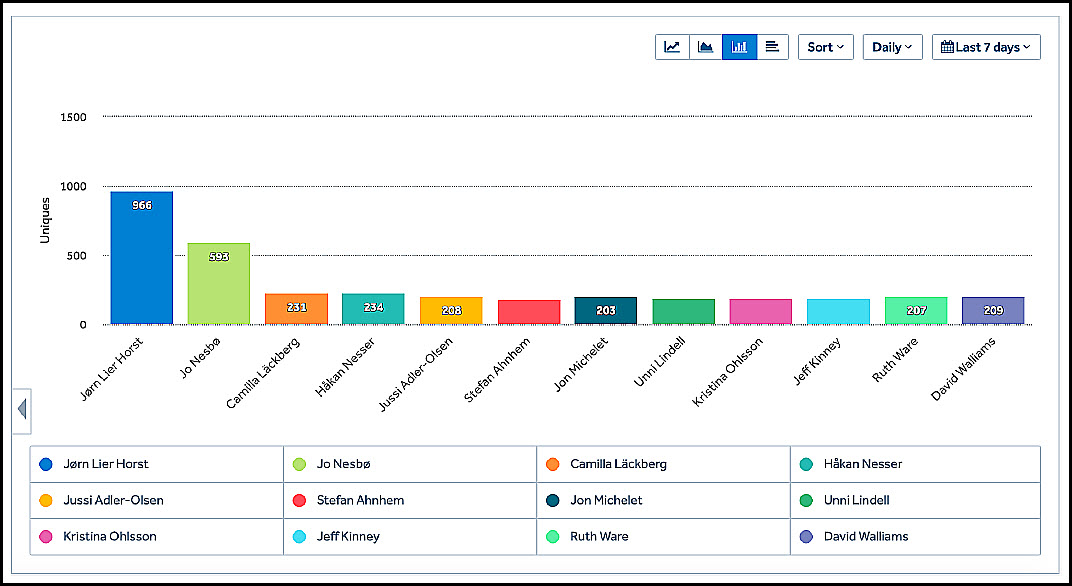 What Hull stresses as another key advantage beyond branding and marketing control, is data capture. The Beat Technologies system can tell a publisher the completion rates being seen in titles on the platform, along with information about devices being used to listen to audiobooks or read ebooks, consumers’ reading speeds, time of day, locations, and more, in addition to the usual collection of sales data that can be lost to a publisher through another platform.

“The marketing spend from these two publishers doesn’t drive customers away toward any other retail platform. It drives them to their own platform.”Nathan Hull, Beat Technologies

Hull says that in meeting with publishers in a dozen markets or so, he’s finding that many do know the importance of capturing this data for themselves. “I find they want three things,” he says. “They want to be able to remunerate authors better and generate better revenues for themselves. And there’s that hunger for data.  And they want to have that dialogue with the consumer because at the moment, they don’t. Someone else sells that book for them.”

By the end of the first quarter of 2020, Hull says, he expects to have two more publisher-created platforms using Beat Technologies up and running in new markets, and there are discussions with others. And he stresses not only that Beat creates each publisher’s platform to its precise needs and wants–including questions of streaming vs. download, for example, as well as subscription vs. single sales.

Partnership is a key element of the approach, he adds, making the cost of creating a platform lower than what some expect. “We very much don’t want to just plug in and walk away as a tech company,” he says. “We’ve got a lot more to offer than that in terms of our experience and knowledge on how to gain customers, the marketing, user retention, and more.”

In his presentation on October 16, Hull says, he’ll be stressing not only that the creation of a platform through Beat Technologies may be less expensive than some might expect but also, he says,. “That the partners we seek to work with” are the ones who are attracted to just that: partnership. “We want to scope out the work” with a publisher “and then basically sit alongside them” as a new platform is created and deployed.

“There’s always things to build upon and learn” in such partnerships, says Nathan Hull. “But equally, we want to use our experience, our knowledge of these markets to help.” 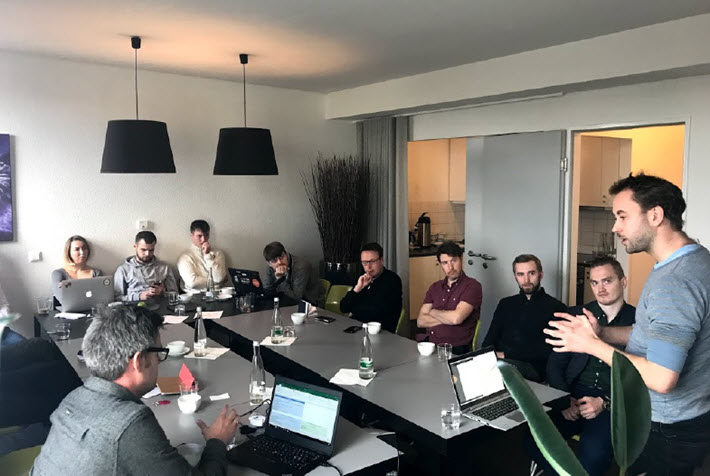 More from Publishing Perspectives on audiobooks is here. More from us on on Frankfurter Buchmesse is here, and more on Frankfurt Audio is here.