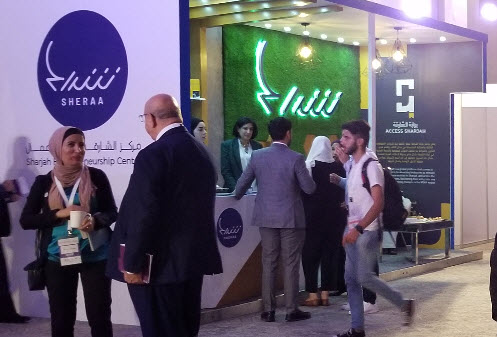 ‘About 90 percent of our Arabic catalog is our own content,’ says Ammar Mardawi of Storytel Arabia. As in other world markets, the Arab books business finds digital to be disruptive. 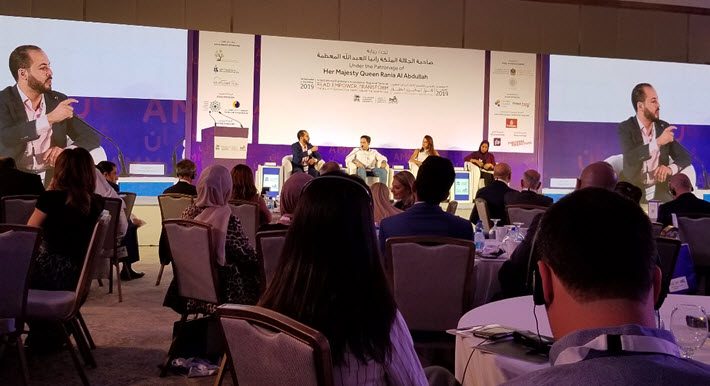 ‘We Should Move to Digital Distribution’

In a lively and thoughtful panel discussion this morning (September 30) on the nature of the digital dynamic as it affects publishing in the Arab world, several interesting key points have emerged today (September 30) in the opening of the first International Publishers Association’s (IPA) and Union of Jordanian Publishers‘ Middle East seminar.

Through moderator Alaa Al Sallal, founding CEO of Jordan’s Jamalon, the panel has issued a call for the cancelation of taxation on all book formats in the region, having pointed out that even comparatively light tax rates can work against sales, literacy, education, and cultural growth.

“I see [digital] as the ideal solution,” Storytell’s Mardawi said, “since as a region, we’re 22 countries. We should move to digital distribution, not least because books are different from such products as apparel” and lend themselves to a digital response.

Nevertheless, in questions from the floor at the end of the session, what appears to be a generational gap has opened, with a member of the more established, traditional elements of the publishing industry suggesting that there’s no need for haste in moving to digital solutions to distribution hurdles that historically have hobbled the region’s publishing growth.

Storytel Arabia’s Mardawi; ‘It Took a Lot of Work’ 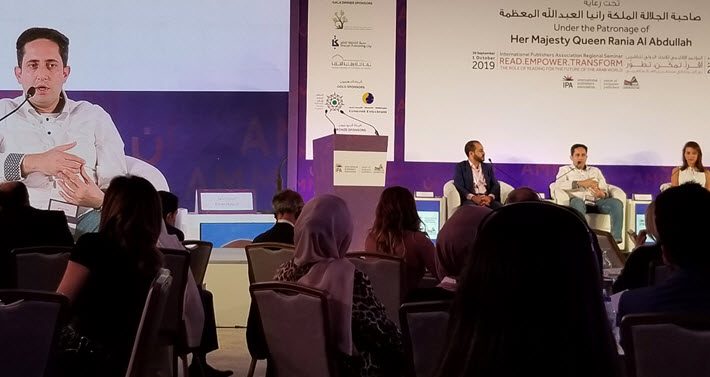 Publishing Perspectives has had a chance to speak with Mardawi about the experiences and challenges encountered by Stockholm-based Storytel in rolling out its audiobook subscription offer to the world of Arabic literature and culture.

We begin by asking what Mardawi and his team have found to be the biggest challenge to intrducing an audiobook subscription into the region.

As some of his colleagues at the Swedish-based international audiobook and ebook service have mentioned in conference appearances including Klopotek’s Publishers’ Forum directed by Rüdiger Wischenbart, Mardawi points to the dearth of audio content available in some markets of the world.

Ammar Mardawi: Starting up in the Arab world, we faced many challenges.

Initially, there were virtually no audiobooks produced in Arabic, and we had to almost fully rely on our own production to launch the service.

“Initially, there were virtually no audiobooks produced in Arabic and we had to almost fully rely on our own production to launch the service.”Ammar Mardawi, Storytel Arabia

After acquiring the audio rights, it also wasn’t easy to set up local production. As you can imagine, there weren’t many professional narrators or studios in the region who understood how to work with audiobooks. It took a lot of work to create and streamline the production process we have today.

Finally, book consumers in the region didn’t know what audiobooks were, and the few who knew about audiobooks thought they were for the blind. Spreading awareness about this new way to consume books and stories is the biggest challenge we’re facing, but we’re very happy with the progress we’ve achieved so far.

Publishing Perspectives: So Storytel Arabia is still creating its own content as well as carrying publishers’ work?

AM: Yes. About 90 percent of our Arabic catalog is our own content.

PP: Can you give us any recent figures on the traction Storytel is having in the Arab region?

AM: Things are going in the right direction.  Not only are we attracting new subscribers at an accelerated rate, but we can see month-over-month subscribers becoming more engaged with the service.

It’s very important for us to see that people are able to integrate listening to audiobooks in their daily activities. For example, the average number of listening hours per user has increased by 150 percent since the beginning of this year.

PP: To reflect what you’re saying, in the leading English-language markets where audiobooks are growing in popularity faster than any other format, we frequently hear from consumers that the key advantage is the ability to listen while doing other things. More than half of those surveyed in the States are usually saying that housework, driving, rail commutes and other such settings are their main listening activities.

And per the issues your panel spoke to, where do you see things standing today in the Arab world? Have people in the region turned the corner yet in terms of realizing that digital development is here to stay? We saw a lot of resistance in the West, as you know. Who do you look to now to help cultivate the interest in audiobooks in the region?

“About 90 percent of our Arabic catalog is our own content. Spreading awareness about this new way to consume books and stories is the biggest challenge we’re facing.”Ammar Mardawi, Storytel Arabia

AM: Definitely. Compared to just 4 years ago, the region has taken very big steps towards digital publishing.

I think the burden lies today on retailers to spread awareness about digital books and how users can acquire and consume digital books legally.

Unfortunately, most Arabic ebooks consumption today is happening through piracy sites. While policymakers could help in combating piracy, I think the change can only happen when consumers understand the difference between legally published and pirated digital books.

Retailers have the ability to offer digital books to consumers and provide an experience that differentiates them from piracy sites, and I think that will be the key to the success of digital publishing in the Arab world. 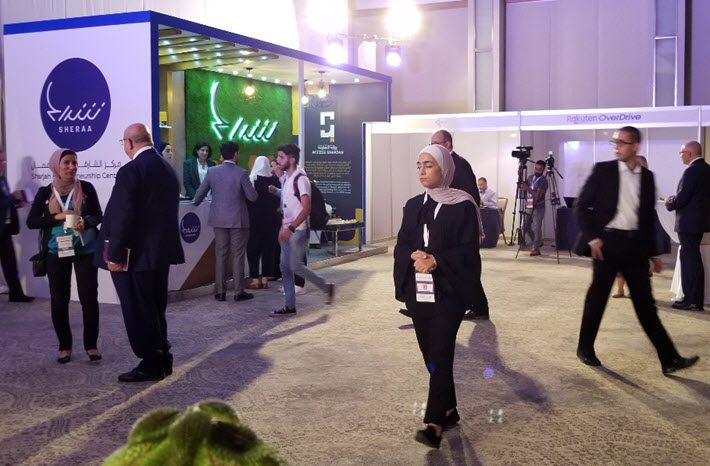 In the sponsors’ display area at the IPA Middle East seminar in Amman. Image: Porter Anderson