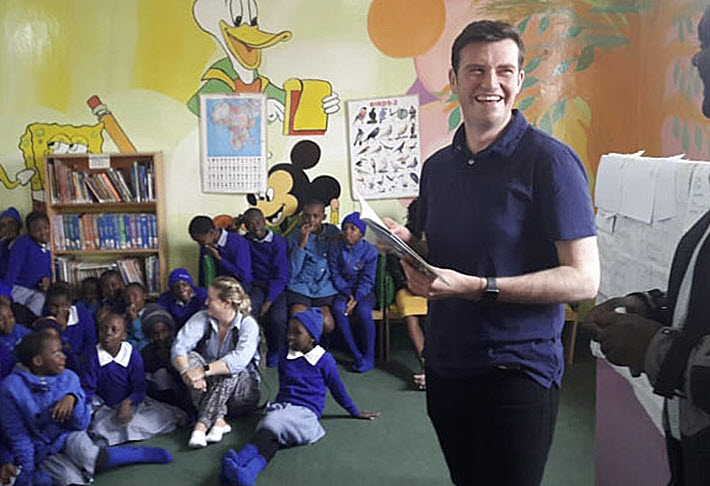 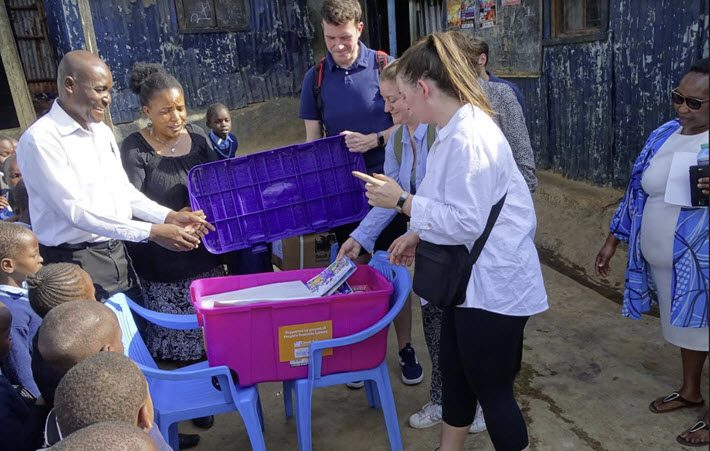 Staffers of the UK’s People’s Postcode Lottery—which donates to the charity Book Aid International—present a delivery of books to schoolchildren in Nairobi. Image: Book Ad International

Two communities in the Kenyan capital have had visits from staffers of the UK’s Postcode Lottery as libraries there received new book donations from Book Aid International, enabled by the lottery program.

A total 400 children’s books and guides for teachers were delivered in two “Pioneer Book Boxes,” as the charity calls them.

Postcode African Trust, which is a grant-making trust funded entirely by the players of Britain’s People’s Postcode Lottery, has so far awarded £1.85 million (US$2.2 million) to Book Aid, helping the charity expand its work in refurbishing libraries, creating new school libraries, and providing books to readers in parts of Africa.

The visit to Nairobi gave lottery staffers a chance to see first-hand how deliveries are handled.

Grant Thomson, corporate communications officer for the lottery, is quoted, saying, “It was hugely surprising to see that libraries [in Nairobi] are so much more than spaces for accessing books.

“They’re somewhere safe to not only to read and learn but also to play, sing, and come together. The books that Book Aid International supplies offer adults and children countless opportunities to change and improve their lives. I’ve always known that the support from players of People’s Postcode Lottery is making a significant difference in Britain and beyond, but seeing and hearing from some of those who are directly benefiting from players’ support brings this to life.” 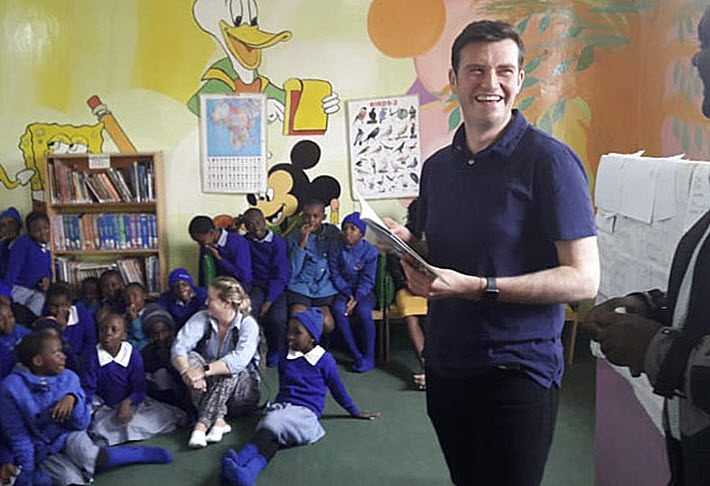 Book Aid International is one of several charities that benefit from the program.

Citizens use their postal codes in playing the lottery, and a minimum of 32 percent from each subscription goes directly to charities bot in the UK and abroad.

For all the program’s charities, some £450 million (US$545.7 million) has been raised for charities by the lottery so far. A calendar of which charities are the beneficiaries of various dates’ lottery action is here.

Subscriptions cost £10 monthly (US$12) and winning postal codes are announced daily. A single ticket can win up to 10 percent of a draw’s proceeds, and the lottery is regulated by the UK’s gambling commission.

In the States, readers will recall that the demise of F+W Media has resulted in the book-publishing assets going to Penguin Random House.

Subsequently, it’s been announced that Peak Media Properties has bought “more than 20 print and digital assets” that were based in F+W’s fine arts and crafts verticals.

Some of the elements of the portfolio acquired by Peak feature quilting, knitting, sewing, sketching, painting, and illustration. Described in the context of the “maker” market, brands based in the arts and crafts division include The Quilting Company, Artists Magazine, Interweave.com, and ArtistsNetwork.com,

Perhaps the most interesting part of this news is that Peak describes itself as “an operating company backed by Macanta Investments and is led by Greg Osberg—who is the Revlyst founding consultant who became interim chief and then CEO of F+W Media in January 2018 in the management shakeup that eventually led to the company’s bankruptcy.

With the news of the acquisition by Peak, Osberg supplies a statement for the news media, saying, “We have before us an opportunity to build Peak Media Properties into a leading publisher across the growing enthusiast market. Our titles, market positioning, and communities are strong, and we will build upon this strong foundation by engaging our loyal customers in new and exciting ways.”

Macanta invested in F+W, media messaging tells us, as it has invested in Peak Media. Macanta’s founder Terry O’Toole is quoted, saying, “The opportunities in the special interest and enthusiast marketplace fit perfectly with the long tradition of editorial and publishing excellence inherent in these titles.

“We look forward to working with Greg and the Peak Media Properties team to grow a great company by bringing even greater value to the maker enthusiast marketplace.”

The in-house aspects of the sales of some of the F+W assets was sorted out in June by Abby Glassenberg at the Craft Industry Alliance this way:

“In a bankruptcy auction … Macanta Investments, a private investment partnership based in New York City was the successful bidder for the largest portion of the [F+W] crafts community with a bid of $2,850,000. A much smaller portion of the crafts community went to Creating Keepsakes Scrapbooking Events/Todd Freidli for $300,000. The backup bidder was Missouri Star Quilt Company together with Long Thread Media LLC, a company held by Anne L. Merrow, a longtime editor of Interweave magazines.

“Macanta Investments is the family investment platform for Terence M. (Terry) O’Toole. Macanta was an owner of F+W alongside Tinicum Incorporated, a private equity firm where Terry O’Toole is a partner. O’Toole was the chair of the board of F+W Media and, through Macanta, likely had significant personal wealth invested in F+W. It’s possible that Macanta is taking ownership of F+W Craft Communities in return for forgiving debt owed to it that was unlikely to be paid in the bankruptcy settlement. O’Toole did not respond to our request for comment.”

More from Publishing Perspectives on F+W Media, including its demise, is here, and more on Book Aid International is here. More  from our Industry Notes series is here.