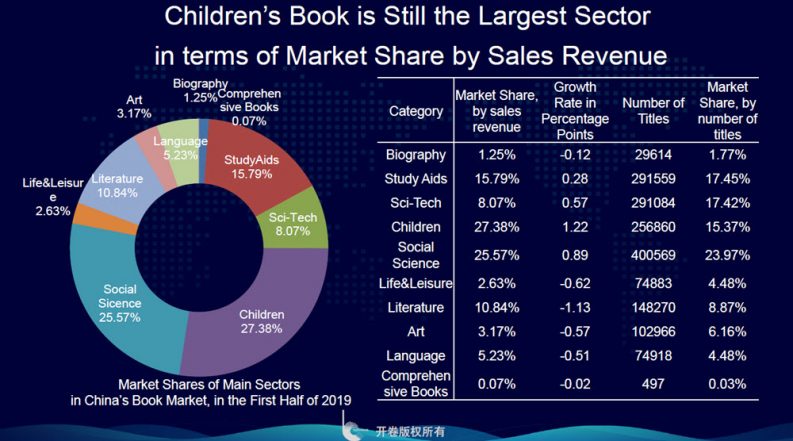 Not unlike trend lines in other world markets, China’s publishing industry is watching the lead in book sales continue to shift to online retail. 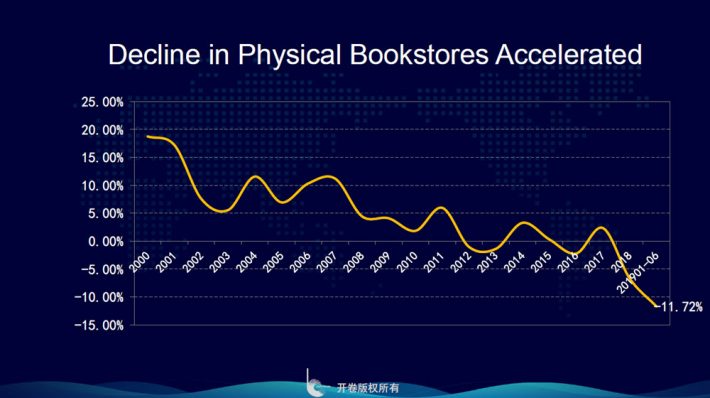 Although Beijing OpenBook is reporting that the growth of points of sale in online retail is slowing in China, Internet sales remain the driver in the market, with physical bookstores’ share continuing to decline. Image: Beijing OpenBook

A View Into a Sprawling Marketplace

In its newly released report on the Chinese book market for the first half of the year, Beijing’s OpenBook research and analysis firm is reporting continued “steady” growth of 10.82 percent over the same period last year, despite what the company sees as an “accelerated decline” in physical bookstores.

OpenBook’s assessment does cite a slowdown in the growth rate of online retail channels, but says those outlets continued to expand at a rate of 24.2 percent between January and June, while physical bookstore points of sale registered an 11.7-percent slowdown.

It functions somewhat as Nielsen and NDP do from the West, and Nielsen Book Research International has worked with OpenBook in Asian operations.

As of July 1, 2019, OpenBook’s data is estimated to encompass 60 percent of the total sales activity in China. OpenBook draws point-of-sale data from more than 7,000 bookstores in China, including 4,151 physical bookstores representing all provinces in China except Tibet, Hong Kong, Macao, and Taiwan.

What Sells Online and Off 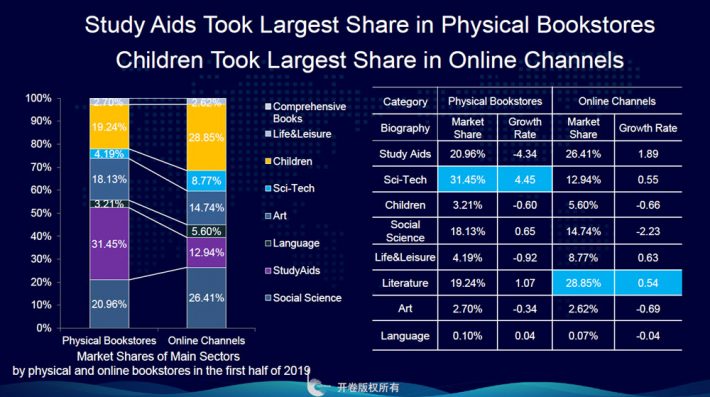 In the online retail environment, Beijing OpenBook reports that in the first half of this year, children’s books are the largest category of sales (28.85 percent), while in the physical bookselling environment, the lead is held by study aids (31.45 percent).

The Shift to Online Sales 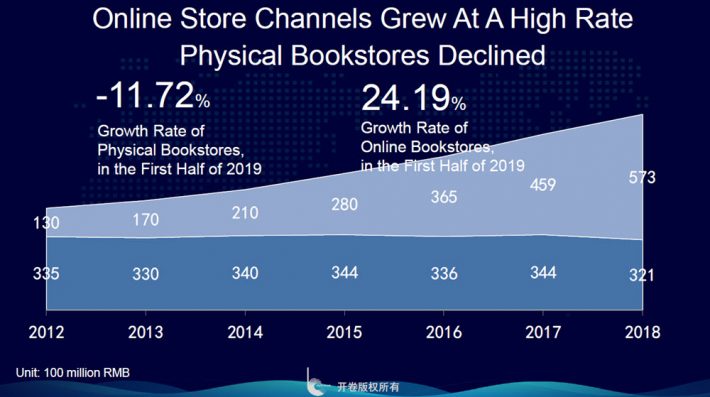 As in many major world markets–the United States and United Kingdom in particular–the trend toward Internet retail and its challenge to brick-and-mortar stores is concerning in China. But OpenBook’s team cites an interesting bit of background on the perceived downturn for physical stores in the first half of the year. The 19th Communist Party National Congress was held in October and precipitated the publication of many policy-related books. Those volumes seem to have good traction in the physical bookselling arena. As the energy of the national congress has waned in the first half of this year, so has the bubble of physical store sales that seemed to follow it.

And in terms of the rising performance seen in online sales—a trend first spotted by OpenBook in 2008—discounts are playing a key role.

“OpenBook has started to release discount data of online channels in 2018,” according to Rainy Liu of OpenBook. “In the first half of 2019, online channels’ shoppers enjoyed an average book discount rate of 40 percent. And that data doesn’t include additional promotional activities such as double-discount specials, gifts offered with certain purchases, and coupons.” 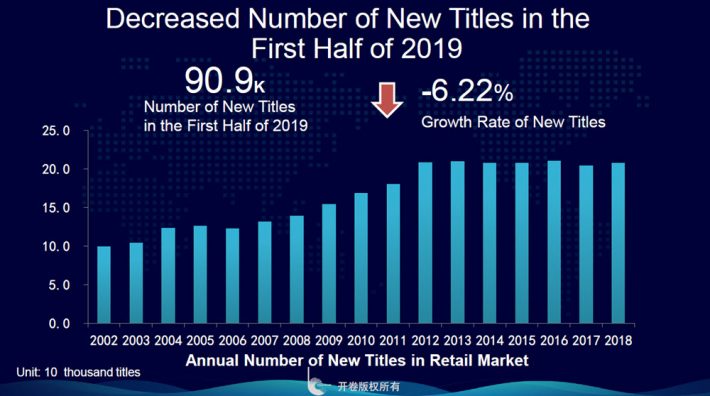 The impressive figure of 90,900 new titles that OpenBook counted between January and June actually reveals a drop of 6.2 percent over the same period in 2018.

Calculating what it describes as publishing efficiency—the sales of new books compared to wider retail action beyond the industry in a given period—OpenBook reports that it’s seeing a decline in that efficiency. No matter whether defined by sales revenue or units sold,” the team tells Publishing Perspectives, the contribution rates of new titles moving to the market are getting smaller and smaller.”

There was, however, a slight uptick detected in sales by revenue in the first half of 2019 over the same period of 2018, something attributed to some bestselling titles.

But on the whole, as in other world markets, backlist seems to hold the main energy in the market. 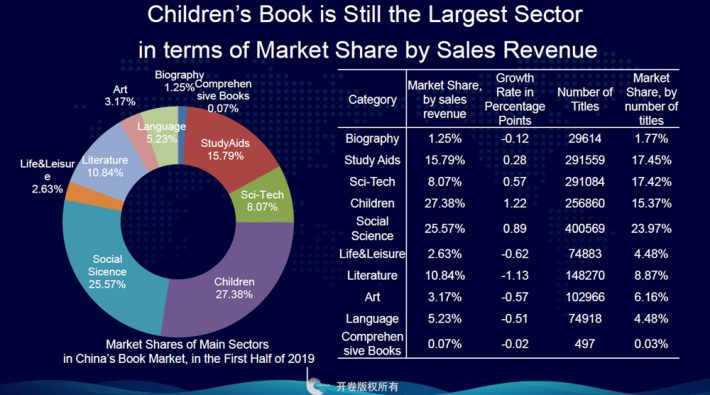 As seen in OpenBook’s research, children’s books remain foremost among categories at 27.38 percent of the market in the first half of the year, but books in the social sciences, with 400,567 titles, are close behind, at 25.57 percent.

Educational study aids are next at 15.79 percent, with literature at 10.84 percent. 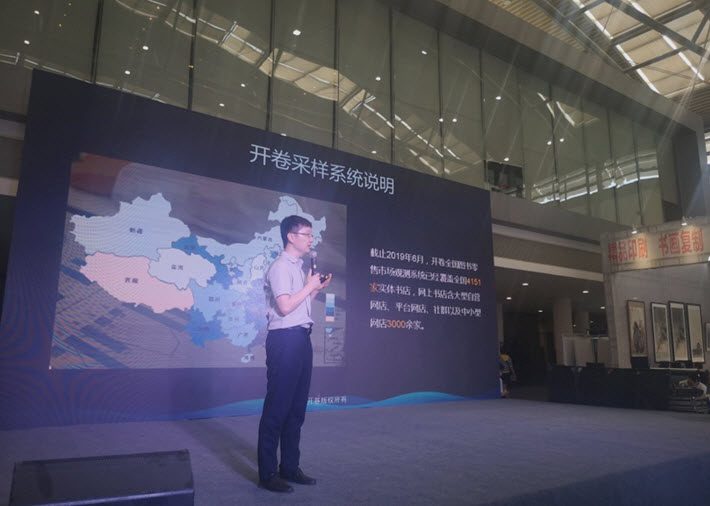 More on China’s bestsellers, see our reports here, and more from us on the Chinese market in general is here.