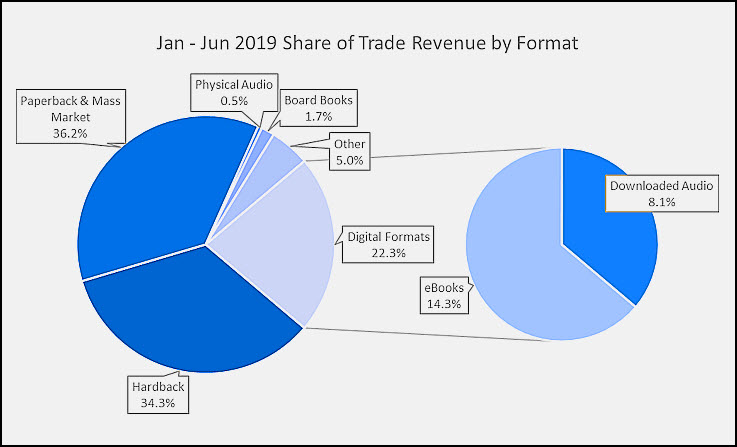 Combining ebooks and downloaded audio, digital formats comprised 22.3 percent of reported US trade publishing revenue, in the first six months of this year, according to the AAP’s StatShot data. 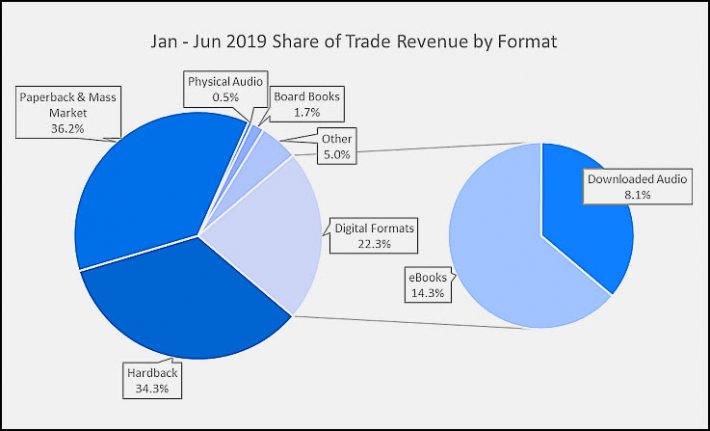 In releasing its StatShot report today for June, the Association of American Publishers has put together its January-to-June six-month report, as interpreted from “publisher net revenue, including sales to bookstores, wholesalers, direct to consumer, online retailers, etc.”

The data is tracked monthly and at this point, the AAP says, includes revenue from about 1,360 publishers, “with participation subject to change over time.” That last point is to be kept in mind, of course, because it reminds us that the comparisons of one time frame’s report to another may not always be based on a stable pool of input. At the end of this article we have a more extensive discussion of the variables at play.

The top-line message from the organization is that the combined revenue of the participating publishers for the first six months of the year was nearly US$6 billion. The previous caveat in place, that represents an increase of 6.9 percent over the same first-half period of 2018.

The revenue categories tracked in these metrics include:

Key factors as provided to the news media in today’s (August 28) report, are:

The AAP expresses the monthly year-over-year changes from January to June in the following chart. 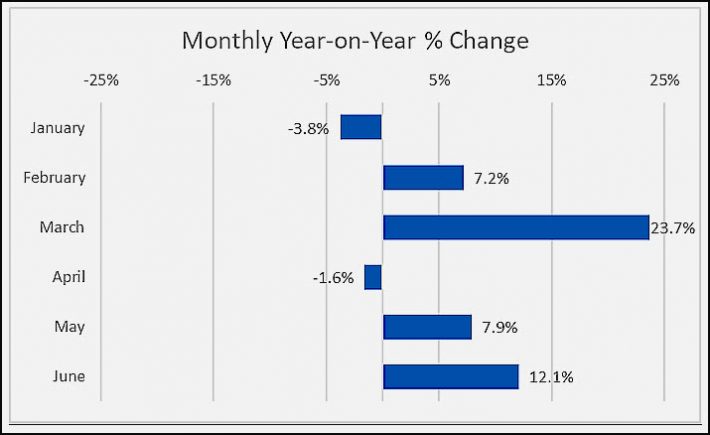 Religious presses in the first six months of the year led in revenue growth with an 11.4-percent increase over the same period last year. They now represent 9.5 percent of all reported trade revenue.

In trade figures for the first six months of the US market’s 2019, one interesting point is that while ebooks declined 3.8 percent year to date, ebook revenue for university presses actually increased by 10.8 percent and for religious presses by 4.1 percent.

January-to-June  2019 US Trade Revenue by Format (in millions)

In the first six months of 2019, the AAP reports that total revenues for participating education and scholarly publishers “saw an uptick, reaching $2.52 billion and increasing 11.6 percent compared with the same period last year. The largest growth was attributable to K–12 sector.

January-to-June  2019 US Education and Scholarly Publishing (in millions)

A more thorough explanation than is sometimes provided follows the basic information distributed to the news media this time, relative to the variables that can affect comparative interpretations of the reports over time.

We’ll quote this fully for you here, and any italicized emphasis is the AAP’s:

“It is not, however, possible to make apples-to-apples comparisons to StatShot reports issued in previous years because:

“(a) The number of StatShot participants fluctuates over time, with the pool of participants growing or shrinking in each report. This year’s 6-month report, for example, drew data from more publishers than last years.

“And (b) It is a common accounting practice for businesses, including publishers, to restate revenue numbers based on updated information. If, for example, a business learns that its revenues were greater in a given year than its reports indicated, it will restate the revenues in subsequent reports, providing information that is more up-to-date and accurate.

“This year’s report on revenues for the first six months of 2019 reflects some restatements for 2018 revenues.”