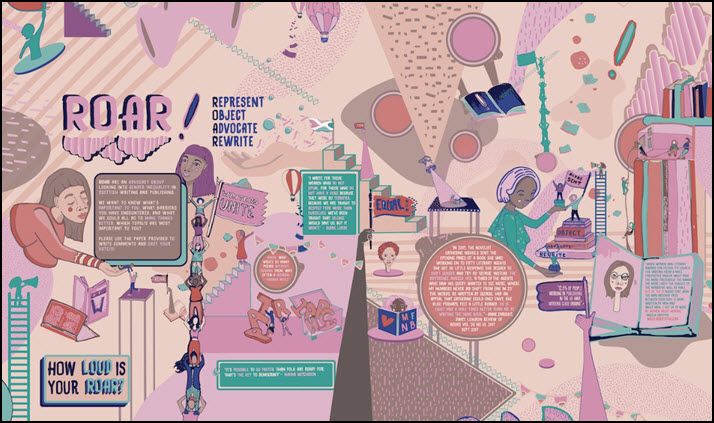 Not unlike the United States’ VIDA Count, the ROAR organization’s research reveals discrepancies in gender representation in parts of the Scottish publishing industry. 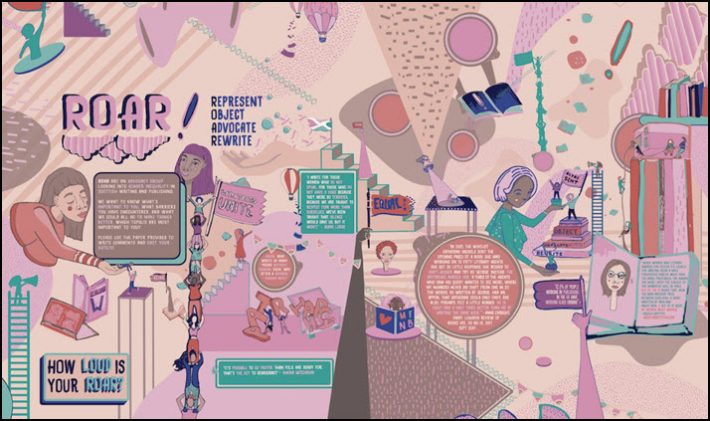 From the Scottish ROAR site, illustration by Alice Brown

Released today (July 25), the program of research and activism in gender inequality called ROAR—for “represent, object, advocate, rewrite”—is spearheaded by Christina Neuwirth, whose research has been funded by the UK’s Arts and Humanities Research Council and the Scottish Graduate School for Arts and Humanities.

Since 2016, the group has been forming around research results in the Scottish writing and publishing industries, and the new site has been established to serve as a kind of hub for the group’s mission—to “identify, interrogate, and combat inequality” in the literary sector.

The newly reported information draws from 2017 data. Some of its highlights, according to the group, are:

Modeled to some degree on the US-based VIDA Count from Women in Literary Arts, the effort includes a look at news-media coverage of books for the same time period, January to December 2017, reporting today that:

Book festivals in Scotland fared better as far as the surveyed 2017 gender balance goes. According to figures being supplied by ROAR:

The Scottish Census for 2011 reported 48.5 percent of the population to be men and 51.5 percent women. A survey conducted by the Equality and Human Rights Commission, indicates that 0.4 percent of the UK population identifies in a way that’s neither male nor female.

The research data is credited to Neuwirth, a PhD candidate with the University of Stirling, the University of Glasgow, and the Scottish Book Trust. The organization expects to have a count annually and those who might like to be in touch about the count can reach the group at mail@roar.scot

While gender equality seems to be the focus of the group’s output so far, its mission statement refers to a broader mandate, reading, “ROAR is a group working to identify, interrogate and combat inequality in Scottish writing and publishing. … Our mission is to end discrimination based on gender, class, sexuality, language, nationality, disability, race, age, religion, or caring responsibilities and their intersections.”

“It means paying attention to the way we work, and building opportunities and programs that are open and inclusive. It means that we need to roll our sleeves up.”Jenny Kumar, Literature Alliance Scotland

The program engages—at least through the participation of its working group—a substantial collection of Scottish organizations and institutions related to publishing and writing. The working group comprises:

In a prepared statement provided with today’s announcement, Literature Alliance Scotland’s Jenny Kumar is quoted saying, “This important research demonstrates unequivocally that we collectively have a long way to go to level the gender playing field, and that as a sector we need to work together and take responsibility to contribute toward positive change in all that we do, every day.

“This gender discrimination must be addressed in order to make the sector—and the country—a fairer, more representative, and more democratic space.”Claire Squires, University of Stirling

“For Literature Alliance Scotland and our members, that means driving for better representation and inclusivity at all levels across all our activities to better reflect the society we live in. It means listening and learning and recognizing that stereotypes around gender in writing and publishing need to be challenged and that it starts with us and our work.

“It means paying attention to the way we work, and building opportunities and programs that are open and inclusive. It means that we need to roll our sleeves up.”

And University of Stirling publishing studies professor Claire Squires is quoted saying, “The ongoing research underpinning ROAR’s investigations into our lived experience of inequalities in the literature and publishing sector are revealing. In particular, women are disadvantaged in terms of book reviewing, and in terms of the proportions of Scottish nonfiction books.

“This gender discrimination must be addressed in order to make the sector—and the country—a fairer, more representative, and more democratic space.”

More information is at roar.scot.

More from Publishing Perspectives on diversity is here, and more from us on Scotland’s market is here.