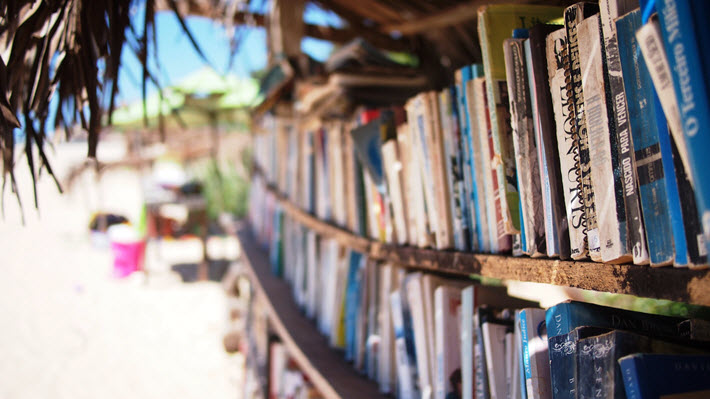 More children are seen by Scholastic’s researchers as reading ‘zero books’ during the summer, and many parents don’t grasp the ‘summer slide’ problem. But next summer, Suzanne Collins may help out. 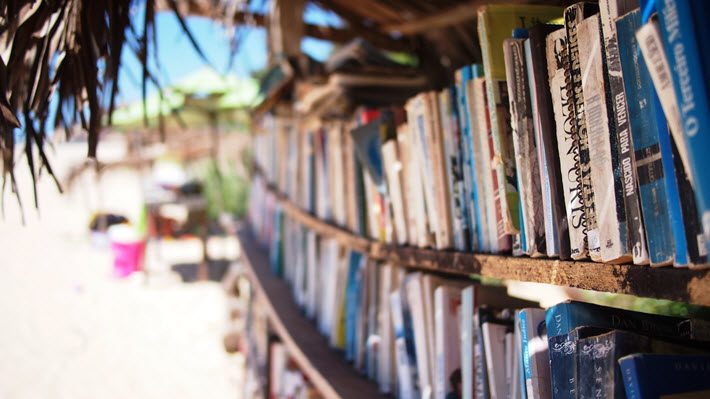 Does your family beach trip include a library? Scholastic’s seventh Kids & Family Reading Report says access to books can be critical in avoiding the ‘summer slide’ in youth reading. Image – iStockphoto: Mike Sheridan

When the seventh edition of the biennial Kids & Family Reading Report from Scholastic was released in the depths of January—focused on reading habits of American families—summer reading wasn’t on a lot of minds. As we reported then, the emphasis was on the reported valuable effects of reading aloud.

Today, as July opens, Scholastic’s Read-a-Palooza Summer Reading Challenge is in full swing and putting a lot of blue pins on the North American map, with kids having logged—at this writing—54.7 million minutes read so far. Working with the United Way, the publisher releases staged donations of books to young readers in need, with the minimum level of contributions coming in at 200,000 books.

For more on book lists (in Spanish and English), a reading pledge for participating kids, a minute tracker, and a certificate of achievement is here. The program runs to September 6. 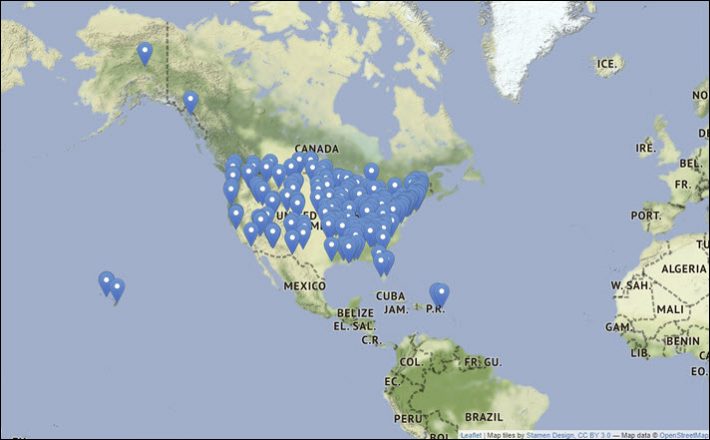 From Scholastic, Read-a-Palooza’s updating map of where more than 54 million minutes of summer reading have taken place so far this year. Image taken July 1, 2019

And as summer approached, the world’s largest publisher and distributor of children’s books released another section of interpretation from its biennial Kids & Family report, with several highlighted research points. 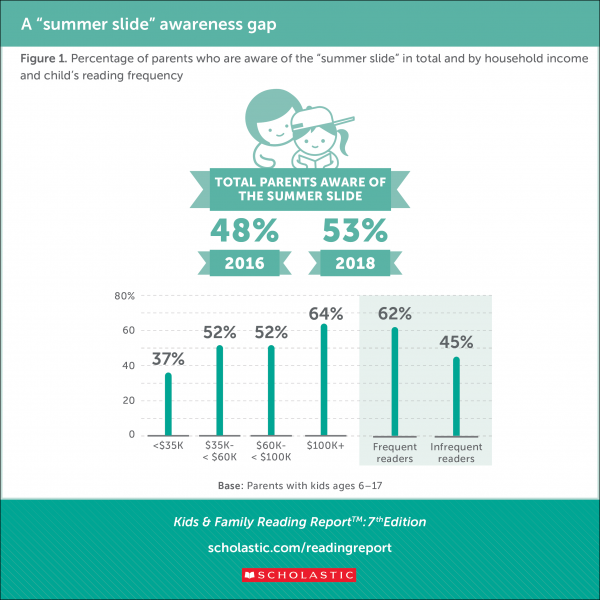 “At first glance,” researchers write, “parents seem aware of the importance of summer reading, as 94 percent agree reading over the summer can help their child during the school year.

“And yet, nearly half of parents with school-age children are unaware of the “summer slide” (47 percent), the loss of academic skills that occurs when school is not in session and which is attributed largely to the lack of reading.”

This may be more important than many think, Scholastic’s team says, because summer-slide effects are cumulative. “Researchers estimate that by the time a struggling reader reaches middle school, summer reading loss has accumulated to a two-year lag in reading achievement.” 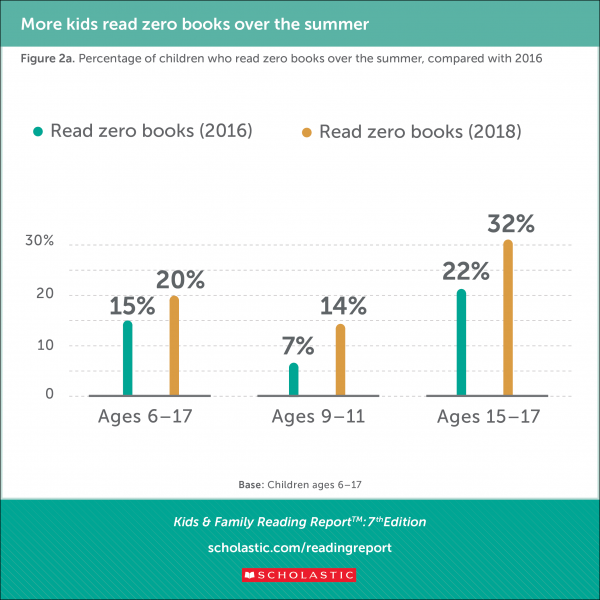 On the other hand, the study is citing a rising number of children reporting reading no books at all during their summer break.

“Thirty-two percent of kids ages 15 to 17 said the number of books they read over the summer was zero, up sharply since 2016 (22 percent).

All this despite the fact that, according to the researchers, “Most kids know that summer reading provides benefits that extend well past the summer months. Seven percent agree that reading over the summer will help them during the school year and on average, kids read nine books in the summer of 2018.”

‘A Disconnect Between Parents and Kids’ 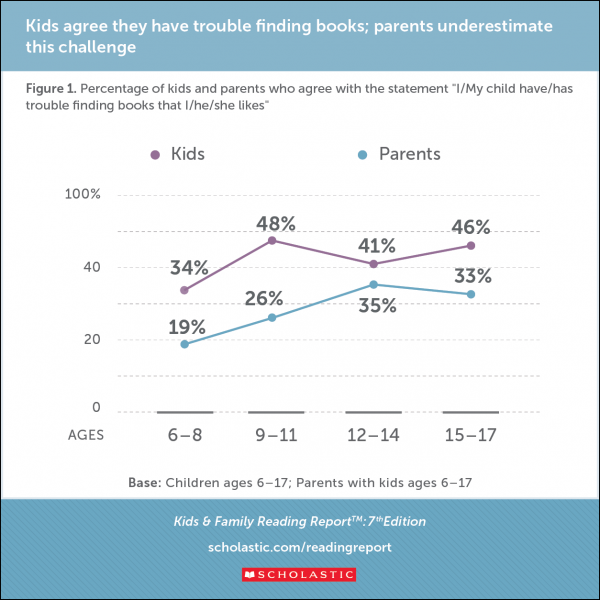 There are several additional observations worth looking at here.

“Despite a similarity in trend lines, there’s a disconnect between parents and kids on this challenge: one-third fewer parents than children think their child has trouble finding books.”

Some of the most concerning data from the survey has to do with how socio-economic factors play into the kind of access children may have to books in the home.

“On average,” researchers write, “there are 103 books in the home libraries of children ages 6 to 17, yet this varies widely. Most strikingly, frequent readers have an average of 139 books in their homes vs. 74 in infrequent readers’ homes. 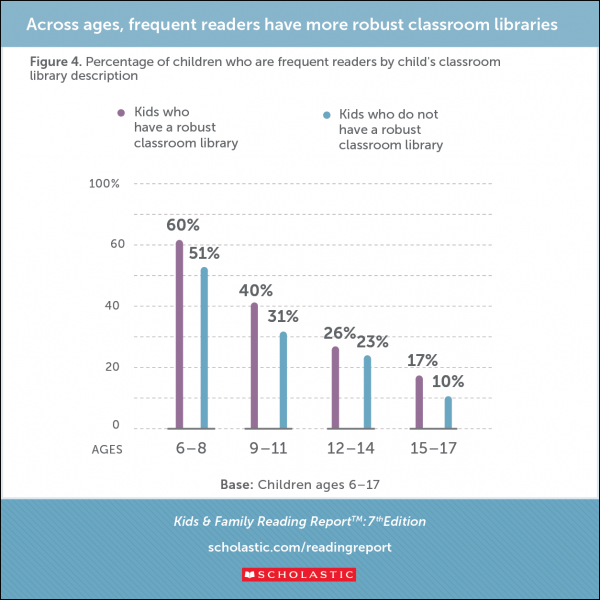 “Similar trends are seen by income as well as race and ethnicity. Families with incomes of US$100,000 or more have nearly twice the amount of books than families with less than $35,000 in annual income (125 vs. 73), and Hispanic and African-American children have fewer books in their homes than white, multi-racial, Asian or children of other racial backgrounds.”

An interesting response from young readers surveyed: “While 70 percent of school-aged children say they have a school library, only 56 percent say the school library has enough of the books they want to read.” 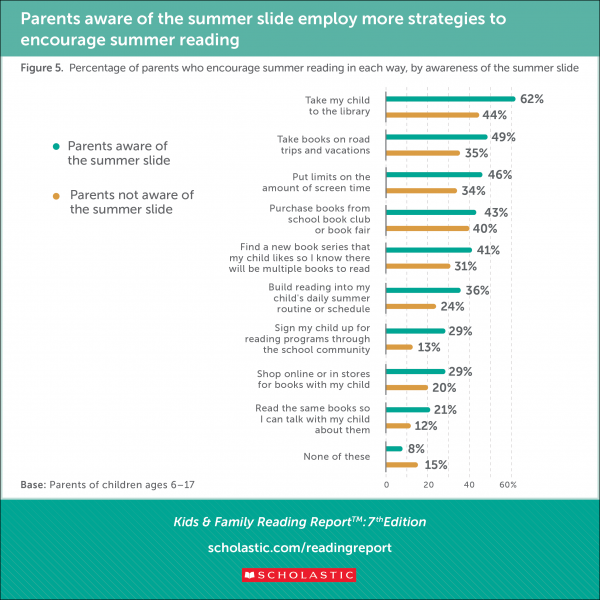 As might be expected, book access appears to shrink during the summer. The kids aren’t at school with its library, right? “Research on book deserts—areas with a stark lack of access to print materials—showed in the studied urban areas that the summer months drastically limit book access in high-poverty neighborhoods,” the study team reports.

And that, it turns out the survey researchers might just applaud that idea.

“To better understand reading behavior among kids and their parents when school is out, the Kids & Family Reading Report probed the different strategies parents use to encourage summer reading at home,” researchers write.

“Notably, the top three all centered on creating book access and choice for the child: taking trips to public libraries ranked first (54 percent), followed by ordering from school book clubs or book fairs (42 percent) and taking books on road trips or vacations (42 percent).

Help May Be on the Way: ‘The Hunger Games’ Prequel

“Parents who are aware of the summer slide are more likely to engage in nearly all activities to encourage their children to read while school is out,” according to researchers. “And a peer-reviewed study—published by the American Library Association in 2017 and centered on the effect of summer program participation among fourth grade students in North Carolina—found that if parents understand the summer slide, they prioritize transportation to the library to facilitate summer reading.” 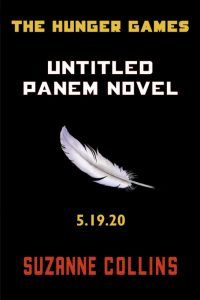 And in 2020, Scholastic itself may be young summer readers’ best friend. The company in the latter part of June announced that author Suzanne Collins is coming in with a new novel “revisiting the world of Panem 64 years before the events of The Hunger Games, on the morning of the reaping of the 10th Hunger Games.”

Scholastic is telling us that international rights for the trilogy have sold into 54 languages and 57 territories. There are more than 100 million copies of the books from the trilogy out there. The four films have pulled in almost $3 billion since the first one went to the cinemas in 2012.

And it will have been 10 years since the third book in the trilogy, Mockingjay, was published when the Untitled Panem Novel, as it’s called at the moment, is released on May 19, shortly before BookExpo in 2020.

“With this book,” Collins is quoted saying, “I wanted to explore the state of nature, who we are, and what we perceive is required for our survival. The reconstruction period ten years after the war, commonly referred to as the Dark Days—as the country of Panem struggles back to its feet—provides fertile ground for characters to grapple with these questions and thereby define their views of humanity.”

And along the way, she may also single-handedly lift beach reading for kids to tidal-wave ferocity and slow that summer slide in 2020.

More from Publishing Perspectives on children’s books is here, and more from us on Scholastic is here.