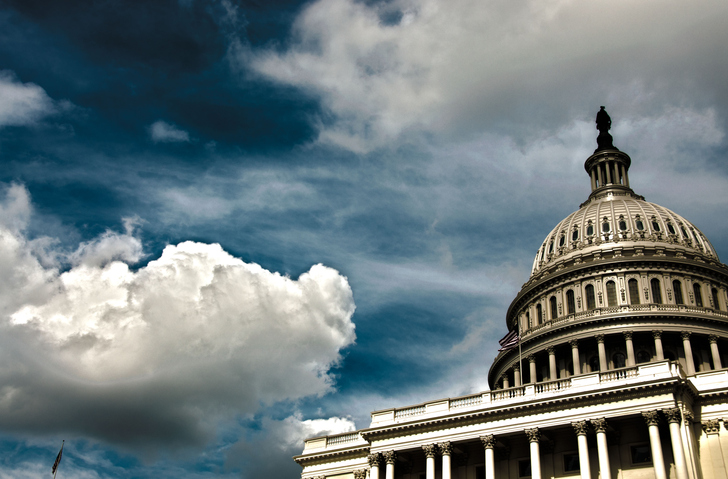 Just in time for the upcoming appearances by Robert Mueller at the US Capitol, a new and fully accessible, free edition of the Mueller Report has been produced by a broad coalition of effort. 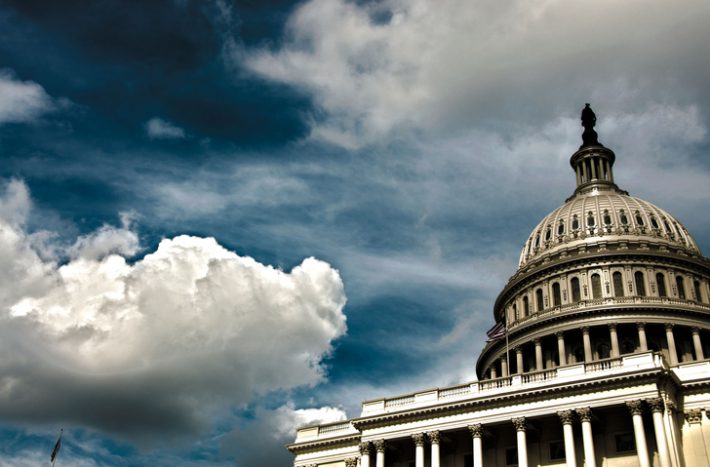 The Timely Arrival of an Edition With Live Links

The much-anticipated appearances on Wednesday (July 24) by the former special counsel Robert Mueller before the US House committees on  intelligence and the judiciary are being called by some observers “the movie version” of the 448-page Report On The Investigation Into Russian Interference In The 2016 Presidential Election. 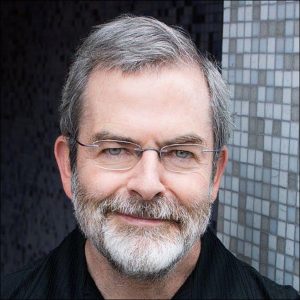 The implication here isn’t without chagrin for the publishing industry: one of the key reasons that the Democratic party’s committee leadership figures have pushed for this appearance is not that Mueller may say something that’s not in the report but that it’s understood that most Americans haven’t read the report. The visual culture is in session.

This is the underlying condition for both Republican assertions that there’s nothing to see here and Democrats’ assertions that the second volume of the report contains at least four and possibly more actionable instances of evidence of obstruction of justice by Donald Trump.

Because the United States isn’t a reading culture, few are aware, for example, of what a bipartisan cohort of more than 1,000 former federal prosecutors have agreed “would, in the case of any other person not covered by the Office of Legal Counsel policy against indicting a sitting president, result in multiple felony charges for obstruction of justice.”

The initial report was made available free of charge as a PDF–with some redactions—by the US Department of Justice here. Several other free editions have been available, usually copies of the PDF, and professionally rendered trade editions have been published at modest prices by Scribner, Skyhorse, and Melville house, and they’re produced in all the standard formats, as well, including audiobooks. 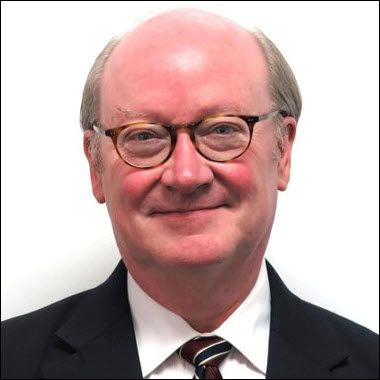 But as publishing consultants Thad McIlroy and Bill Kasdorf write in their new article at Publishers Weekly, the original release from the Justice Department wasn’t even “born digital” in the sense certified by Benetech’s “Global Certified Accessible” accreditation, a standard that might seem a no-brainer in such a case of government-serviced text for the citizenry.

As Kasdorf tells Publishing Perspectives this morning (July 22), “Most publications are not fully accessible, although it’s easier than people realize to get it right.

“But it’s especially appalling that such an important document–coming from the US government, which mandates accessibility–was published in such an egregiously inaccessible form.

“Fortunately we managed to pull the right team together to get this done.”

To help remedy this, Kasdorf and McIlroy—who together have formed Publishing Technology Partners—have helped coordinate a digital edition that the Digital Public Library of America (DPLA) is making available, free of charge, for immediate download as an ebook. A direct download is available here. It is also available in the Open Bookshelf collection in the SimplyE App (iOS is here, Android is here).

“It’s especially appalling that such an important document–coming from the US government, which mandates accessibility–was published in such an egregiously inaccessible form.”Bill Kasdorf

Working with the Internet Archive, the producers of this edition have been able to make 747 live footnotes available in an accessibility-accredited format. As the Archive article explains in its Saturday (July 19) posting, the report “is now fully accessible for the print-disabled, which includes blind, low-vision, dyslexic, and other users with visual impairments. This work was done by the good people at Publishing Technology Partners and codeMantra.”

The New York Times donated the list of links it had used in its own intensive digital workup of the report—which was perhaps the first edition to be rendered searchable. (If you’re really strapped for time but need to focus before Wednesday’s testimony, the Times’ list of seven key points from the Mueller report is an indispensable distillation of the critical elements, published by Matt Apuzzo and Adam Goldman on May 29.)

With the times’ data and the work of the Archive’s Wayback Machine director Mark Graham and his staff, write McIlroy and Kasdorf, the links now offered in the new edition include “more than 100 links to justice.gov, 80 links to Twitter, and 50 links to C-Span—links archived on the Wayback Machine to avoid link rot and content drift.”

“What a great experience it was,” McIlroy tells Publishing Perspecives, “working with this star-studded team–Internet Archive, DPLA, New York Times, DAISY, PDF Association, and, of course, Bill Kasdorf–and on such an important project. The whole effort was coordinated on Slack, another first for me–it’s a tool more publishers should be using.” 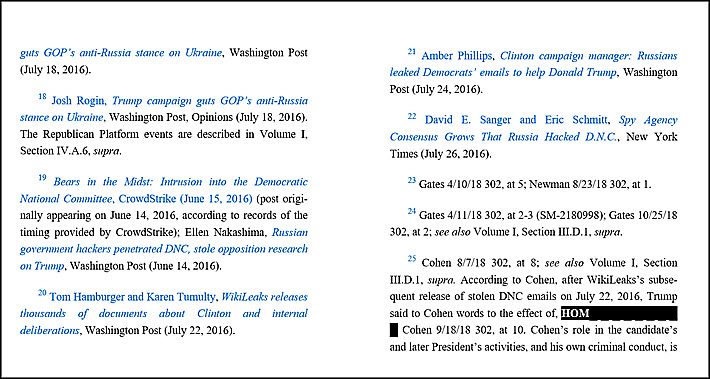 An excerpt from Volume II, Section II of the Mueller Report in the new DPLA edition with live links operative

The irony here is that for all the unnecessary limitations of its original State Department release, the Mueller Report, itself, is remarkably easy to read.

Particularly in the second volume, in which the special counsel team outlines 10 acts several of which prosecutors say justify an obstruction charge, the text is concise, unemotional, easily understood, and has the forward pitch and pacing of much good narrative writing.

Still, this is content that most Americans have avoided. This in itself is a cautionary moment for the book business, one of the creative industries, after all, that has felt the direct assault of Donald Trump on more than one occasion. As we reported on March 27. the Mueller report had become a bestseller on Amazon before its publication date was known. 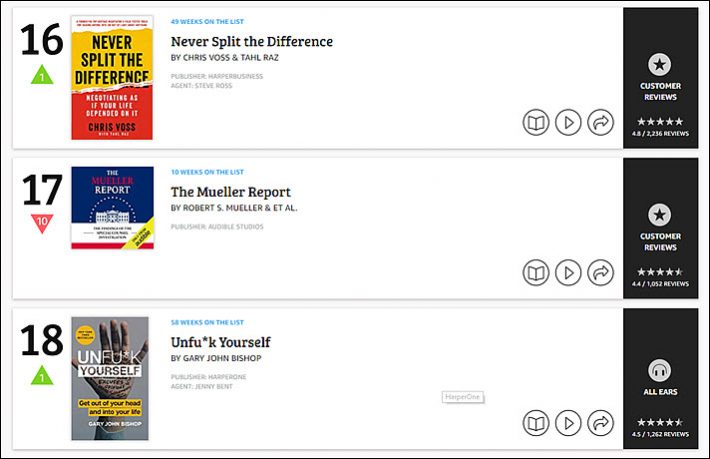 The Amazon Charts currently show The Mueller Report audiobook in its Audible Studios edition at No. 17 in most read nonfiction. Narrators are Marc Vietor, Mark Boyett, and Victor Bevine

The theory on which the Democrat-dominated committees are operating this week, then, is that if Robert Mueller can be led in testimony even to simply recite on live television what he and his team determined, it will be eye-opening to the many citizens (and, it is alleged, some lawmakers) who haven’t read the report. Voters are so tied up with their hectic lives, so exhausted by the manic pace and complexity of the Trump administration news cycle, and perhaps so resolutely led by the attorney general Bill Barr and other Trump surrogates to believe that the report found nothing, that it appears that very few actually understand that the report by no means exonerates Trump and may, in fact, suggest that but for the Justice Department policy against indicting a sitting president, Trump could indeed be in legal jeopardy.

As Alexndra Hutzler at Newsweek wrote on May 30, the short appearance by Mueller the day before—in which he really said very little other than that, no, the report did not actually exonerate Trump—prompted the 1,000+ prosecutors to renew their insistence that ” if he weren’t in the White House, President Trump would be charged with serious crimes. This isn’t even a close case.”

And thus, the coming Mueller appearance is gathering enormous weight.

Whether described by Republicans as a waste of time and a witch hunt or by Democrats as a potential tipping point toward impeachment, the event is seizing so much focus that even the major broadcast networks will suspend their regular programming on Wednesday and carry the hearings live—a potentially expensive move in an advertising-driven ecosystem.

While, of course, all the 24-hour news cable systems will be glued to the hearings, at CBS, the new Evening News anchor Norah O’Donnell is to make a rare daylight appearance to lead the coverage starting at 8:30 a.m. ET (12:30 p.m. GMT), and NBC and ABC will also create special programming, as Fox News offers its affiliate stations the opportunity to carry its coverage.

So it is that the DPLA edition of the Mueller Report has arrived at a felicitous moment and is ready for your download. For those who need to move most quickly ahead of the hearings, it’s recommended that you jump right to Volume II, and its Section II, “Factual Results of the Obstruction Investigation.” 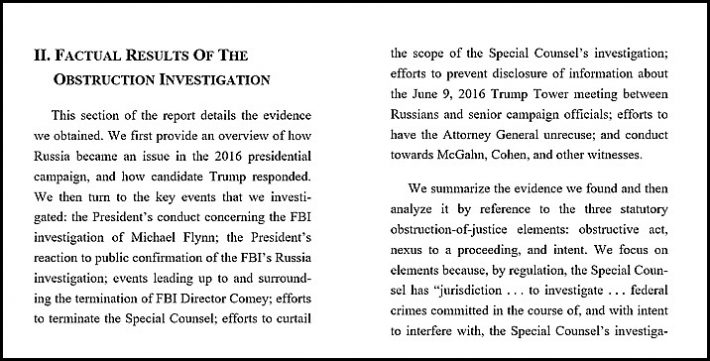 The opening of Volume II, Section II of the Mueller Report in the new DPLA edition

More from Publishing Perspectives on political books is here, more on Donald Trump is here, and more on nonfiction is here.