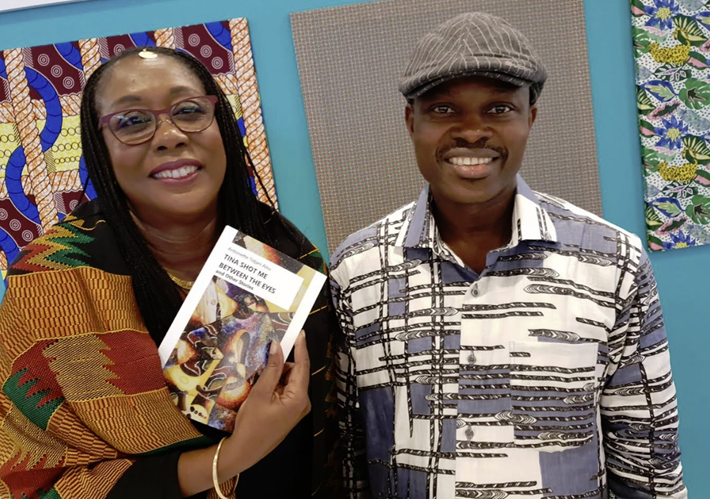 Created by a publisher in Senegal and an author based in Niger, the Sarraounia Prize is accepting manuscripts for young adult readers.

‘The Task of Developing African Minds’

A new biennial YA award, the Sarraounia Prize, has been announced for published and unpublished authors and illustrators based in Africa.

Organizers are calling for entries, with applications open now (July 26) to September 30.

The €1,000 (US$1,114) award is the result of a collaboration between Senegal’s Sulaiman Adebowale, familiar to Publishing Perspectives readers, and Antoinette Tidjani Alou. Adebowale’s publishing company, Amalion, publishes in French and English and is based in Dakar. Tidjani Alou is a scholar and author who leads the one-year-old Arts and Culture training program at Abdou Moumouni University in Niamey, Niger.

The name Sarraounia means queen in the West African Hausa language and is also the name of a near-mythic 19th-century anti-colonial warrior whose story has inspired a novel by Abdoulaye Mamani and a film adaptation by Med Hondo.

Adebowale and Tidjani Alou obtained funding for their project from the Culture at Work Africa initiative which is co-funded by the European Union and other partners, and is overseen by the Barcelona-based Interarts, a foundation working in cultural cooperation. The winner will see her or his book published and distributed by Amalion and its partners in the spring of next year.

In an interview with Publishing Perspectives, Adebowale says he and Tidjani Alou wanted to create the prize because of “the paucity of YA fiction for a strand of the population that’s the largest group on the continent.”

Young adult fiction hasn’t developed in Africa for many reasons, he says, “partly because tremendous focus has rightly been on early childhood development and children’s publishing.

“The need to provide the right reading material for schools also takes the bulk of resources, whether public funding or publishing energies.”

In Africa, Adebowale says, YA entertainment generally “has been left to other media sectors like film and games, which actually could be explored fully through African YA fiction.”

African teens, for the most part, read Western YA fiction, he says. “We cannot leave the task of developing African minds to the global publishing industry alone, no matter how connected teenagers in Africa are to the rest of the world. The Sarraounia Prize aims not just to promote reading material for YA, but to put [young adults] at the center of discussions around them, on the way to understanding their worldview as they set out for the larger world.”

Adebowale says he’s intent on developing a YA fiction list at Amalion, which may be the continuation of a welcome trend: last May, Publishing Perspectives reported on the creation of a literary agency specialized in mentoring and promoting African middle-grade and teenage fiction.

“We cannot leave the task of developing African minds to the global publishing industry alone, no matter how connected teenagers in Africa are to the rest of the world.”Sulaiman Adebowale, Amalion

In 2018, Germany’s Goethe-Institut Sub-Saharan Africa ran an “AfroYoungAdult” talent search for aspiring writers of YA, who then participated in workshops to see their stories published in an anthology. The Sarraounia Prize will consider the work not only of both published and unpulished authors because writers based in Africa frequently have limited opportunities to see their work on the market. Applicants for the new award program can be aged “14 or 100, as long as the topic of the book is for and about young adults,” says Adebowale.

Language is also an important factor. From the start, the inclusion of an African indigenous language was a requirement for Adebowale and Tidjani Alou. This year’s prize entries can be in English, French, or Hausa, the latter being one of the most widely spoken and written indigenous languages of West Africa. Subsequent editions of the award will alternate with other languages from different parts of the continent as more partnerships and collaboration develop. Some of the languages Adebowale says he hopes to work in are Amharic, Arabic, Bambara, Swahili, Fulani, Wolof, and Yoruba.

The first round of funding for the prize ends in 2020, but Adebowale says that it’s possible to apply for further funding from Culture at Work Africa. He says he’s optimistic about resources, “if we do a good job with this first edition.”

The Sarraounia Prize organizers will soon announce the jurors, who were chosen from the publishing sector. They’re still working on putting together a reading committee, which will be drawn from a broad geographical spectrum.

The prize guidelines can be found here.

More from Publishing Perspectives on publishing and book awards is here, more from us on Africa is here, and more on children’s and YA literature is here.