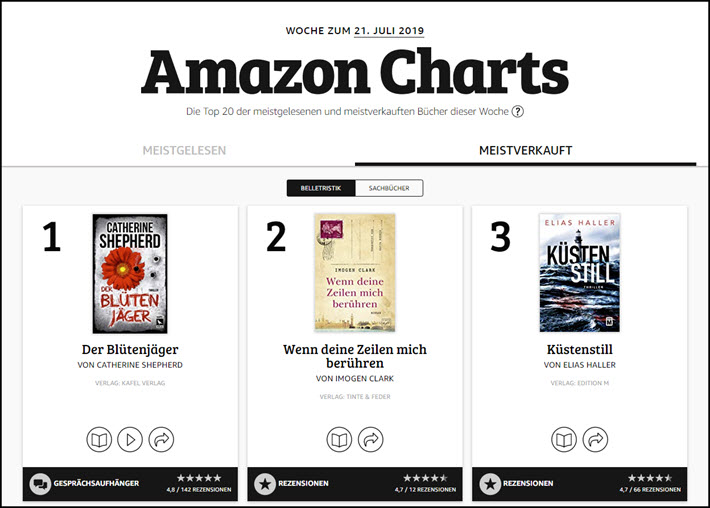 The Top 20 ‘most read’ and ‘most sold’ are gathered weekly by Amazon on this proprietary ranking, just rolled out to Germany and the UK.

‘A Spotlight on the Success of Digital-Only Publications’

A fixture of the American Amazon site since we wrote up their debut in mid-May 2017, the Amazon Charts are now among some of the most frequently mentioned rankings.

It’s interesting that it took two years for them to be added to the Books sections of the sites for the UK and Germany, but as of the latter part of Wednesday (July 24), they’ve been introduced for the week of July 21 on the German site and the UK site,  and those alerted to this move have been looking over the new editions.

The Amazon Charts, updated weekly, list the Top 20 digital titles in fiction and nonfiction by “most read” and “most sold,” which creates some interesting discrepancies in itself.  (You may not feel so bad about not reading everything you buy, once you start following Amazon Charts.)

The Top 20 “most sold” list ranks the most books sold, pre-ordered, or borrowed (by Prime members and from Kindle Unlimited) from Amazon.co.uk and Audible.co.uk weekly in physical, ebook, or audiobook formats. The German edition of Amazon Charts at Amazon.de appears to be focused only on Kindle ebooks.

While probably needless to say—and with all deference to lovers of print everywhere—it’s one of the distinguishing advantages of digital content that its usage can be tracked. When a digital copy goes into the hands of a consumer, such data is available, and the company averages the usage on a daily basis for its weekly listings.

Amazon, messaging news media from its Luxembourg offices for this announcement, lists the key features of Amazon Charts this way: 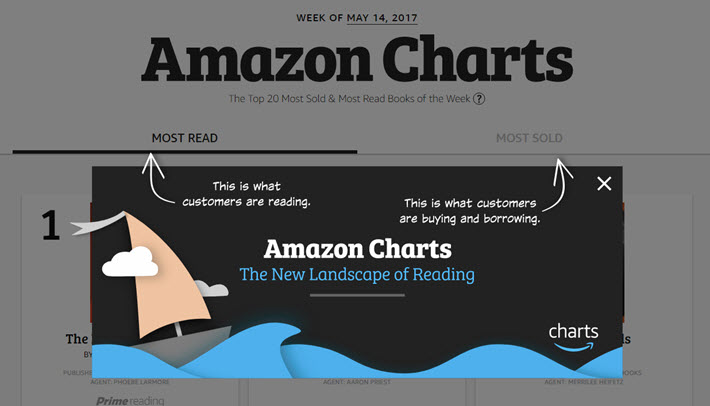 We’ve brought back a graphic from the US rollout in 2017 about the Amazon Charts indicating how the listings are divided between ‘most read’ and ‘most sold.’ You also toggle between fiction and nonfiction. Image: Amazon

As with so many things Amazonian, the reception in the past 24 hours has been mixed.

At The Bookseller in London, editor Philip Jones notes that the arrival of the Charts on British shores is significant because it offers some limited insight into Amazon’s sales prowess of various titles on the digital side. “The data represents the first time print and digital sales have been recorded together,” Jones writes, “throwing a spotlight on the success of digital-only publications, which are not currently tracked by the official charts company Nielsen BookScan.” 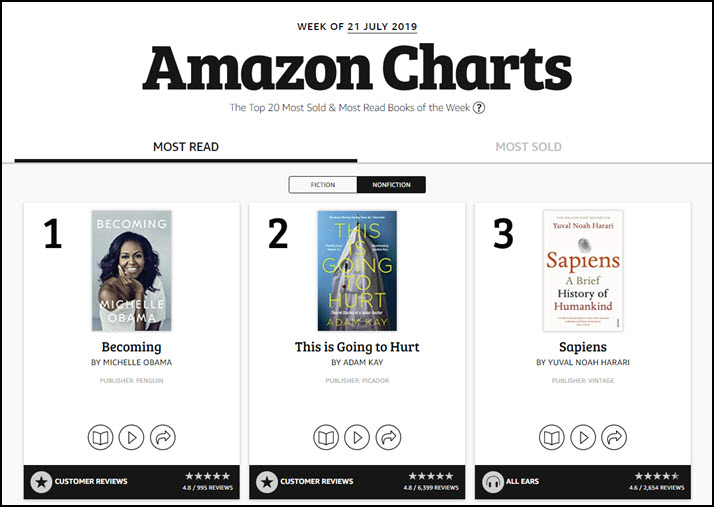 Image: The Amazon UK site’s Charts debut this week has Michelle Obama’s ‘Becoming’ as the ‘most read’ in nonfiction

Jones also points to interesting distinctions between audio and ebook consumption in this first week of UK Amazon Charts listings, writing, “An ‘All Ears’ icon showcases the most popular books among Audible listeners each week. Amazon noted that more people listened to Harry Potter and the Deathly Hallows than read it on Kindle this week, as was also the case with [David] Walliams’ The World’s Worst Teachers. Seven out of 10 of the ‘most read’ fiction books this week are Harry Potter books; nine of the top 10 ‘most read’ fiction books this week are by female authors, who also dominate the Top 20 list.”

On the other hand, Michael Cader at the subscription service Publishers Lunch—never one to shy from a wry observation—titles his “Automat” feeds listing of the news, “Two Years Later, Self-Serving ‘Amazon Charts’ Launch in UK and Germany.” And of course, the Amazon Charts are, in fact, referencing their own “walled garden” digital ecosystem, per Cader’s line, tracking Kindle and Audible editions.

On the other hand, it’s worth noting that a strong seller from any publisher will show up as such, not just content from Amazon Publishing, the trade house, or a Kindle Direct Publishing, the self-publishing platform. For example, the German site’s top three “most read” fiction titles this week are Potter books from JK Rowling (Pottermore/Carlsen), and on the UK site, the top four corresponding titles are from the Harry Potter franchise (Pottermore/Bloomsbury).

In the States, Michelle Obama is still Becoming the Harry Potter of nonfiction “most read,” with 36 weeks on the list from Crown, while the American “most read” in fiction also have Potter books at Nos. 2, 3, and 4—but Delia Owens’ Where the Crawdads Sing (Putnam) is holding the top spot after 44 weeks.

One very useful feature for industry observers is that the Charts tell you publisher and agent for each listing.

And for international industry observers, it’s great to now be able to look at the Top 20 digital hits “most read” and “most sold” in three major markets instead of just the US listings. Peruse, compare, watch what trends can be discerned as the weeks roll by.

More from Publishing Perspectives on Amazon is here, and more from us on bestsellers is here.