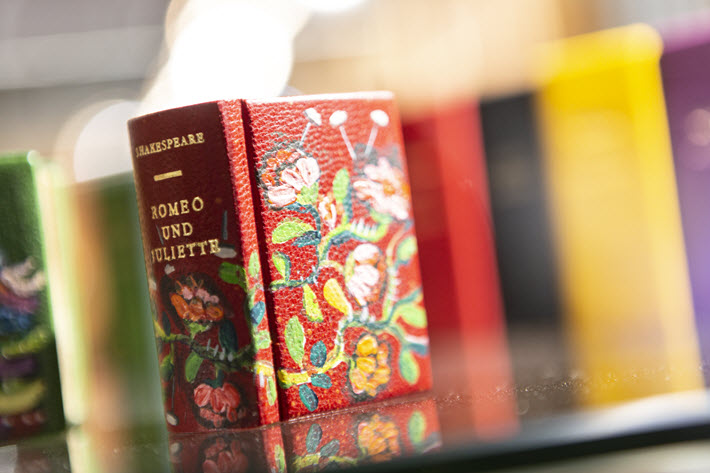 For the first time, exhibitors at the Frankfurter Buchmesse will be able to sell books on both the Saturday and Sunday of the fair. 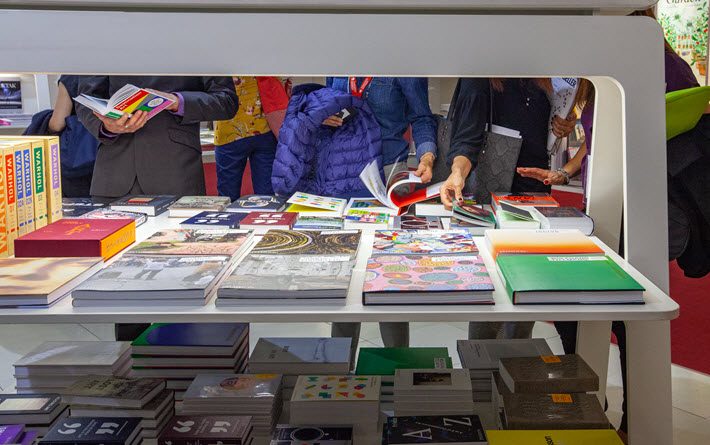 Shortly before close of business on Friday (July 5), Frankfurter Buchmesse announced that for the first time, exhibitors will be able to sell books on both Saturday and Sunday of the week, October 19 and 20.

In the past, sales were allowed only on the book fair’s Sunday. The change was approved by the board of the Börsenverein des Deutschen Buchhandels—Germany’s publishers and booksellers association—in its June 27 meeting, and media messaging from Frankfurt indicates that exhibitors had been asking for the expansion of the sales period to a second day.

This year’s Frankfurter Buchmesse runs October 16 to 20, with the weekdays, as usual, devoted to German and international trade visitors. The book fair’s weekend is hugely popular with German consumers, many of whom engage in storytelling-related cosplay as part of their visit to the fairgrounds.

Fair organizers are offering several points about the newly doubled sales period on the weekend:

In a prepared statement, Frankfurt CEO and president Juergen Boos is quoted, saying, “The expansion of book sales to the entire weekend of the fair is an important signal for the industry.

“The number of book buyers in Germany rose in 2018 for the first time in several years. We want to support this trend at the biggest industry event.

“Many visitors want to purchase books at the fair, and publishers are looking for additional ways to come into contact with readers. We’re therefore very pleased to be able to extend our service in this direction.”

The rise in the surveyed number of booksellers in Germany in 2018 mentioned by Boos comes from the  Börsenverein’s report, Books and the Book Trade in Numbers, which indicated that the number of book buyers in the German market rose for the first time since 2012 last year, by some 300,000 consumers. Our coverage of that study is  here.

The energy of the accompanying campaign is meant to bolster the importance of bookstores and shops to the industry as a key point of sales and to the consumer as a source of inspiration that has life far beyond the dates of the fair. Plans call for broad exposure of the campaign through the use of the German and English hashtags #buchmoment and #bookmoment—those referring to the Börsenverein’s Jetzt ein Buch! tagline (“Now for a Book!”).

Lars Birken-Bertsch, director of business development DACH at the Frankfurter Buchmesse, is quoted saying, “Both elements, the campaign and the sale of the books during the fair, strengthen the industry internally and externally and demonstrate a compelling joint presence.”

Antje Buhl, marketing director of the Droemer-Knaur publishing group, also is quoted in the announcement materials, saying, “In recent years, we had a number of discussions with visitors who didn’t understand why book sales weren’t permitted on Saturday. We’re therefore very pleased about the win-win solution and are sure that visitors will be grateful for it.”

“Allowing book sales on Saturday is a major gain for visitors,” according to Britta Jürgs, publisher at Aviva Verlag and chair of the Kurt Wolff Foundation. “We hope that this will further increase the incentive to participate in the fair, including for independent publishing houses, and that the fair will thus become even more diverse and lively.”

More details are available at this page of Buchmesse’s site. 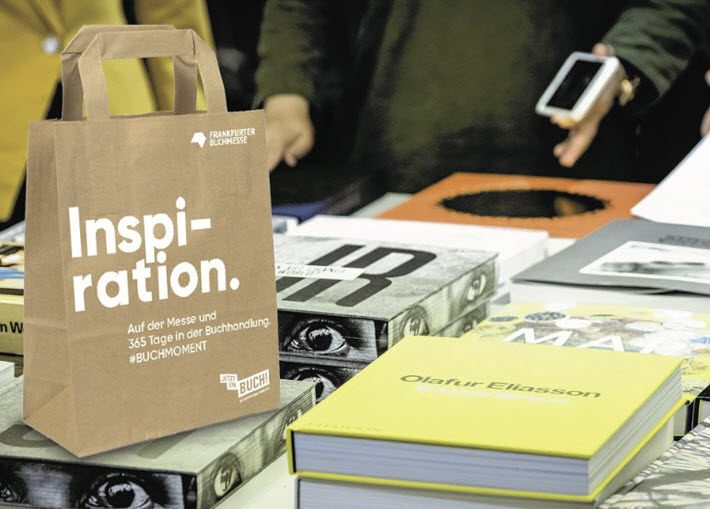 The Frankfurter Buchmesse will offer free paper bags with each purchase at the 2019 fair, in association with the campaign, ‘Inspiration: At the Fair and 365 Days Per Year in Bookshops’. Image: FBM

More from Publishing Perspectives on Frankfurter Buchmesse is here, more on bookselling is here, and more on the German market is here.