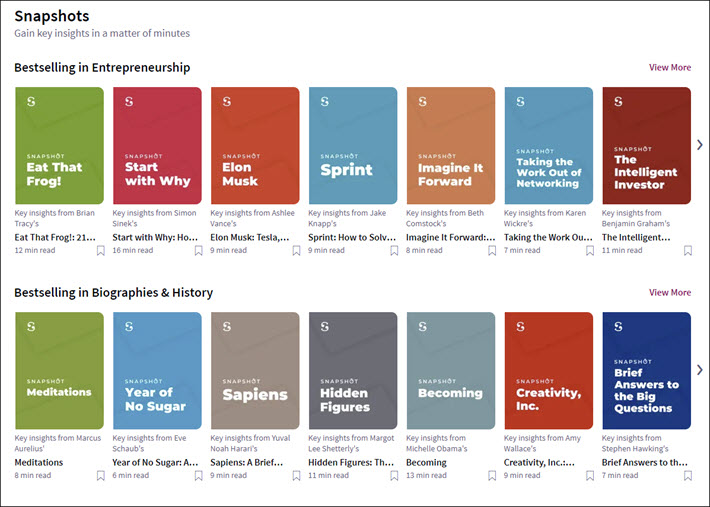 The international subscription service is making available 15-minute samplers of selected books in text and audio, categorized into topical areas from self-improvement to ‘leadership and mentoring.’ 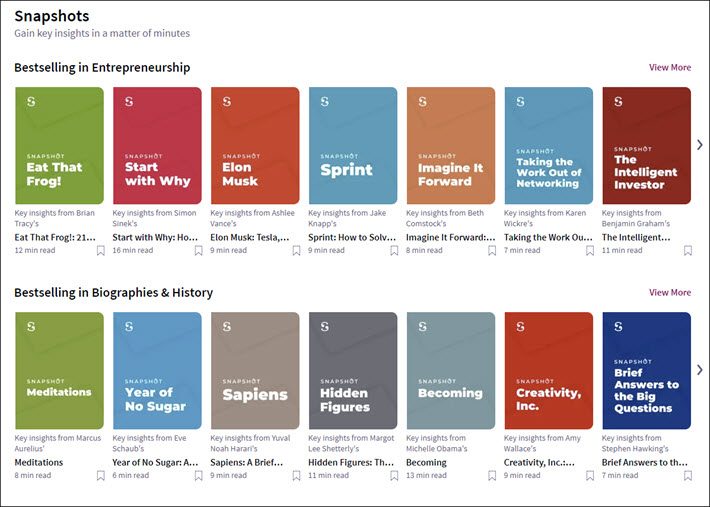 Almost as soon as the international subscription service Scribd had announced on Wednesday (June 26) that its “Snapshots” were rolling out, they were called into question in regards to copyrighted material, despite the fact that the company’s stated intention is to enhance book discoverability.

Snapshots are being called by Scribd “the literary equivalent of a movie trailer,” although most film trailers relate to fiction while Scribd’s Snapshots are for nonfiction work.

“Snapshots are created by Scribd and designed to offer key insights of a book in about 15 minutes to spark subscribers’ interest in reading the book in its entirety,” according to media messaging from the San Francisco-based company. “Snapshots are available exclusively on Scribd in both text and audio format and included within the Scribd membership.”

In a prepared statement, Scribd CEO Trip Adler is quoted, saying, “We’re always looking for ways to improve content discovery on Scribd. With Snapshots, we’re going beyond recommendations and providing key insights that get readers excited about books they may not have considered reading otherwise.

“By providing quick, snackable previews of top nonfiction books, Snapshots can help publishers and authors to get their titles in front of large audiences who are likely to enjoy them.” Each icon linking to a Snapshot refers to it offering “key insights” from a book.

Scribd today reports that it has more than 1 million paying subscribers and attracts ,ore than 100 million unique users monthly, logging more than 190 million hours of reading on the platform so far. There are some 500 Snapshots on the platform now, Scribd says, and they’ve had some 20,000 reads.

And the Snapshot format is attractive. Not only does it first offer a one-paragraph blurb about a book but it then adds a “Read This Snapshot If You” set of criteria for deciding whether to look deeper. 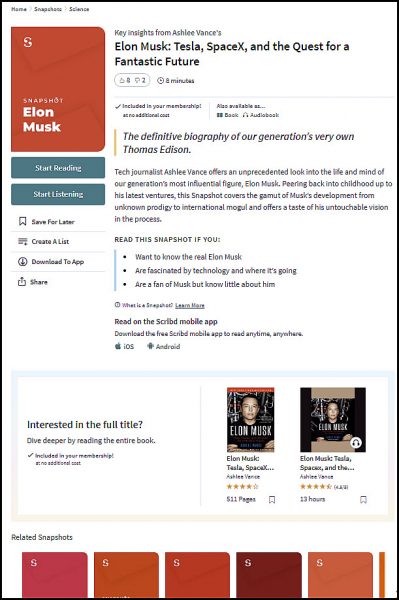 On the Snapshot for Ashlee Vance’s Elon Musk: Tesla, SpaceX, and the Quest for a Fantastic Future (HarperCollins/Ecco, 2015), you’re told to read the Snapshot if you, “Want to know the real Elon Musk” and/0r “Are fascinated by technology and where it’s going” and/or “Are a fan of Musk but know little about him.”

Immediately below that opening section, there’s an “Interested in the full Title?” prompt to get a subscriber to the book itself or to the audiobook edition.

There’s both a text and audio version of the Snapshot.

The audio edition has s short introduction in which you’re reminded that you can read or listen to the full book, and then short (mostly about one minute), and then audio clips from chapters, each clip about one to three minutes long, followed by a one-minute “about Ashlee Vance” with information on the author.

The text version of a Snapshot is a click-through primarily of excerpts from the chapters reflective of those audio clips and an “about the author” brief at the end.

So what you’re looking at in a Snapshot is excerpts from a book’s text or audio, laid out in sequence and effectively Cliff’s Notes-ing the chosen book.

More than a standard ebook sample—because it drops in on various parts of the book to hit highlights—it could indeed serve to entice a reader to read the whole book, or at least part of it. Or, of course, just as with ebook and audiobook samples, it might send the consumer looking for something else.

In touting the Snapshots, Scribd’s material for the news media reads, “In addition to providing a new avenue of discovery for publishers, Snapshots also benefit busy readers who are indecisive when it comes to committing to their next read.

“In a new nationwide survey conducted online by The Harris Poll on behalf of Scribd, 85 percent of Americans said that they believe that time spent reading is an investment in themselves and their overall well-being.

“However, 81 percent of Americans reported that they don’t read as much as they’d like to, with the No. 1 reason cited as ‘not having enough time’ (39 percent), followed by “it’s easier to do other things” (22 percent). Designed to be digested in less than 15 minutes, Snapshots help readers feel confident in committing their time to read the full book.”

The FAQ says that books are chosen for the Snapshot treatment “based on a variety of factors–ranging from the popularity of the title to the release date to the category.” And at the moment, Snapshots are available only in English.

And of course, this development follows the introduction in April of Scribd Originals, as Publishing Perspectives readers will recall.

But that has something to do with the concern being heard about the Snapshots.

In his June 26 report, Publishers Lunch’s Michael Cader writes that the Snapshots may be “a way of delivering highlights from a book with no compensation to the author and publisher, who only get paid when subscribers are sufficiently enticed to go read the full title.”

Cader points to the FAQ on the Snapshots which include the question, “Are Snapshots owned by Scribd?”

Answer: “Yes, Snapshot content is original work from Scribd and is copyright © 2019 by Scribd, Inc. All rights reserved. For information about permissions or licensing of Snapshots, contact: snapshots@scribd.com ”

Update on June 29: In response to Publishing Perspectives’ question, a spokesperson for Scribd responds: “Snapshots are completely original content. We have a dedicated content team that draft and review each and every Snapshot and have integrated these into the product to drive readers to the full title. We did not work with publishers on the first 500, [and] this is largely because we wanted to get this offering integrated into the product so that we can start testing and learning. We’re open to working with publishers and authors on these in the future.” 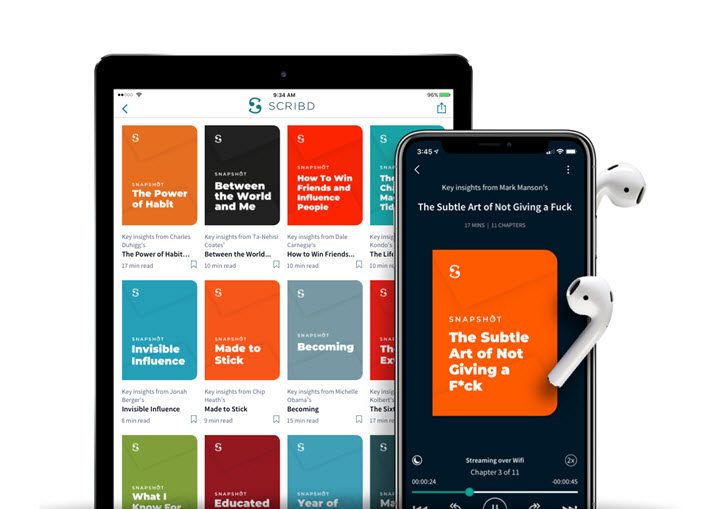 A Snapshot promotional image from Scribd

More from Publishing Perspectives on Scribd is here.