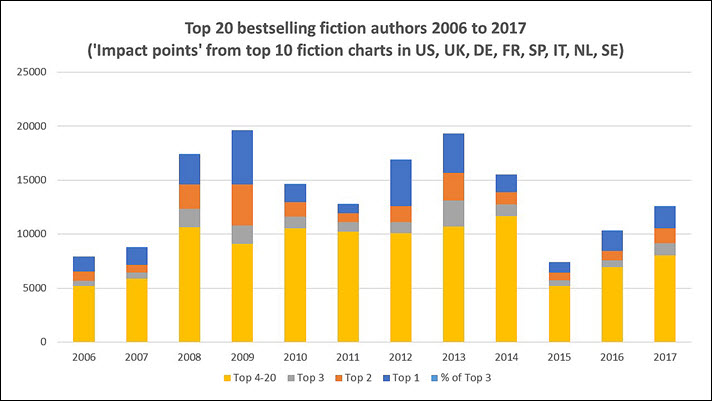 Called a ‘Diversity Report,’ a new study looks at how translation in fiction plays in various markets, with emphasis on Austria and Slovenia. 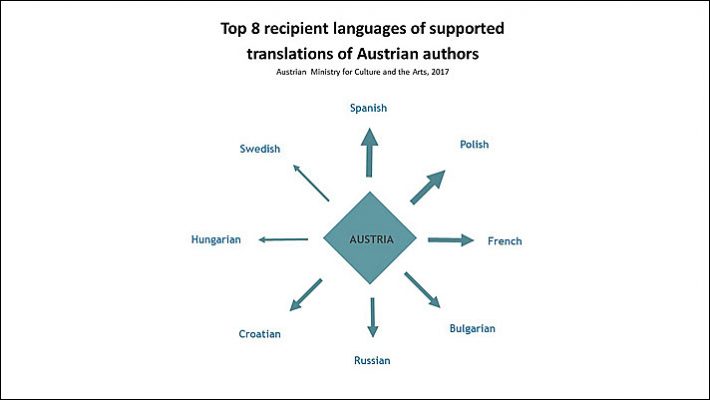 ‘Diversity’ as in Translated Literature

While it’s called the “Diversity Report” from Vienna-based consultant Rüdiger Wischenbart and his associates, the “diversity” of its focus turns out not to be the inclusivity-and-diversity topic most of us associate with current efforts in the publishing industry. In its common usage, a drive for “diversity” in publishing refers to efforts to make the business more inclusive of socio-economically defined groups and themes and to create healthier balances in corporate leadership in terms of gender, race, ethnicity, sexuality, and so on.

But instead, the “diversity” addressed here is that of translated literature in given markets. How much literary fiction in translation is making its way into the publishing markets of the world?

This is also an instance in which funding for a study has a direct effect on what’s covered. Public institutions in Austria and Slovenia have provided special support for the work, and so while the report is subtitled “Trends in Literary Translation in Europe,” those two markets get the attention. Slovenia is to be the Frankfurter Buchmesse Guest of Honor in 2022, and thus this work is seen in that country’s industry as helpful in preparing for its turn on the world stage at Frankfurt.

This report, which covers 2018 data, was made possible by financial support from the arts and culture division of the Federal Chancellery of Austria, the Slovenian Book Agency, and the city of Ljubljana through the City Library of Ljubljana, with the help of the Ljubljana UNESCO City of Literature program.

And the current edition is anticipated to be the first of three years’ reports, with successive editions planned for 2019 and 2020, Wischenbart tells us, and it has been prepared by him in association with Miha Kovać, Yana Genova, Michaela Anna Fleischhacker. 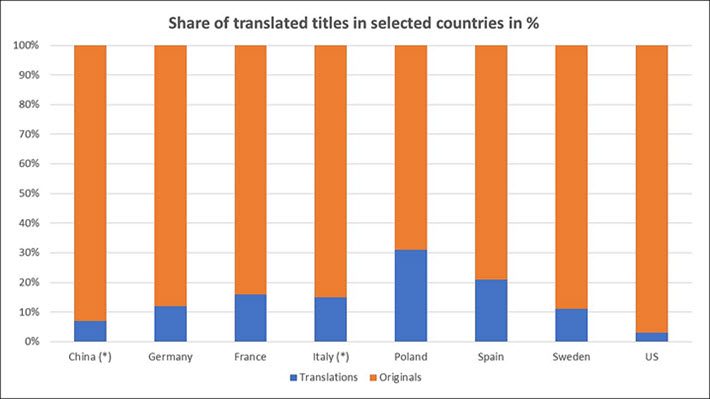 The correct question the report’s authors, themselves, ask very early on has a clear answer: “What insights can be taken from specifically emphasizing two smaller countries, Austria and Slovenia, one a small market of 8 million inhabitants neighboring a much larger Germany that shares the same language; the other, Slovenia, with a population of just 2 million, yet with strong ambitions to find a broad international audience for its literature and culture?”

What of course is obvious is that a study of this kind won’t be able to illuminate the mysteries of translation’s lagging traction in the great English-language markets of the States and the United Kingdom. In both those markets, as it happens, there are encouraging signs of progress, not least because of some aggressive efforts from publishers of translation and awards programs that recognize and bring it to public attention. But this study’s limitations being what they are, the team is right to use restraint.

And, as Wischenbart’s team writes, English markets aren’t the only ones that can seem resistant to translated literature. “Sweden also welcomes a limited number of works in translation in a small market,” the report says, “possibly because many of its most avid readers are used to reading in English, too.”

In an interesting observation, the team writes, “Translations seem not to be facilitated by the presence of a significant immigrant population in a given country. In a case study for the German language markets (including Germany, Austria and parts of Switzerland), we could show that discrepancy between demographics and translations”—which may run counter to customary expectations that the presence of an immigrant readership might bode well for that readership’s language.

There are basically two methodological approaches used, a study of (a) the top segment of fiction bestsellers through charts for a decade across eight markets, and (b) sales success of “a wider variety of authors” comprising “a corpus of almost 250 authors” tracked for “available translations of their works in major retail book catalogs.”

And from the outset, the report concedes its challenge in a discussion, writing, “Drawing a portrait of literary translations in Europe, a continent fond of its rich linguistic and cultural diversity, resembles the futile effort of following a phantom. We can certainly recognize its footprints as it crosses the snowy landscape, and we are obviously conscious of its path, as a story is traveling across borders as it gets picked up by translators, publishers, media and finally the reading audience, shaping deeply how people, or entire countries, perceive each other. And yet, we shall never be able to see that phantom in full. We can only guess who the phantom is, how tall or tiny it is, what is really driving its movements, or what holds it back behind the closed doors at some invisible boundaries afar.” 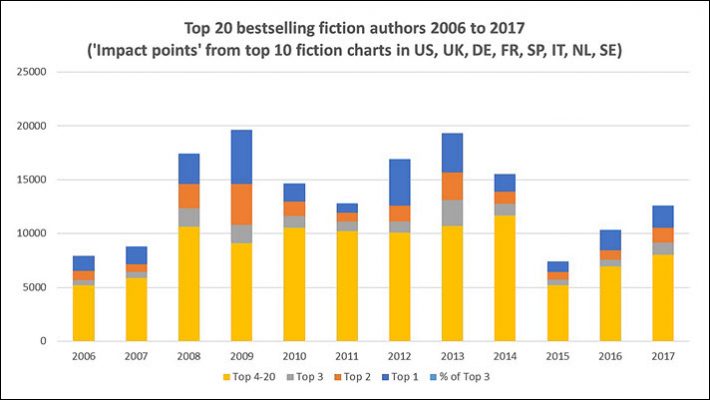 One of the efforts the team made to visualize translation sales success of bestselling authors in western Europe involved assigning a point system to various levels of performance. Even when looking at commercially successful writers “who have become global brands over the past couple of decades,” the study concedes, “much of even the biggest success stories are, at least at the beginning of a global literary career, dependent on speculation and a lot of risk-taking by authors, agents, publishers and merchants.”

And what’s seen here is an echo of the blockbuster problem—the tremendous overhang of bestsellers that can eclipse the midlist. “The single most striking feature from these data is how dramatically a very few top sellers are dwarfing all the rest of book consumption. In most years, the four or five strongest titles of that year tend to form a class in their own right, standing out over the rest like tall skyscrapers over a city’s panorama.”

And in the course of this long, 77-page report, the team looks at many issues, from such elements of the market as Margaret Atwood’s success with The Handmaid’s Tale in its book-to-screen adaptation and expansion for Hulu to George RR Martin’s similar trajectory with Game of Thrones, and from “Anglo-Saxon bestsellers from other reading ecosystems” to “literature reflecting lives in an open world.”

There are charts and graphs and such interesting insights as the one we led with showing us where translation funding seems to be helping Austrian authors’ work go in translation. And of particular potential usefulness, here’s a chart that demonstrations factors and aspects of the work of funding programs for translation: 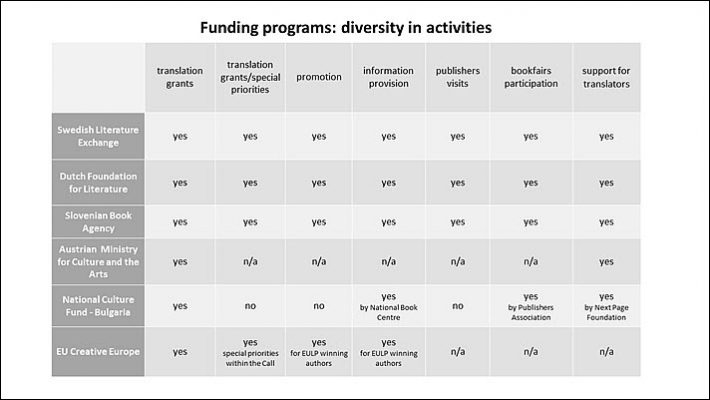 Some quick overall observations from the team include:

But perhaps the most important study, or element of one, in this field is why one culture will read more translated literature than another—what cultural and/or political and/or historical effects are in play when a market responds better or worse than others to works from other languages.

The best message of this report may be that another is needed, one that looks more at the readership than the authors in translation, and at the society behind the subsidies, to understand better the willingness to, as one publisher of translation puts it, “read the world.