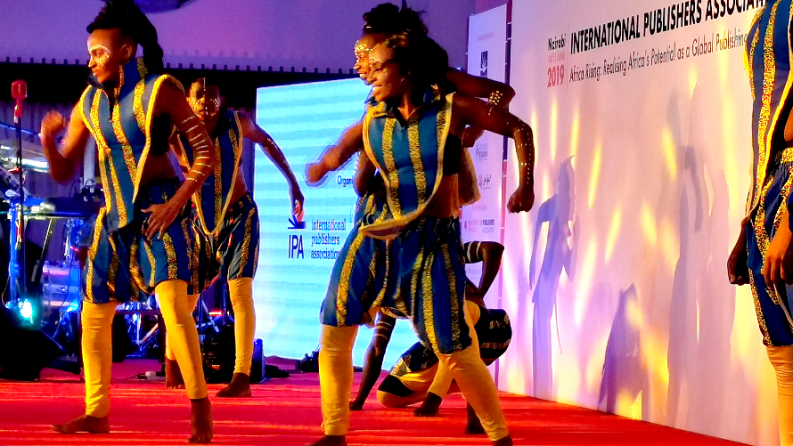 As the IPA plans for next year’s Morocco event, it has newly agreed backing from the African Publishers Network and the Association for the Development of Education in Africa. 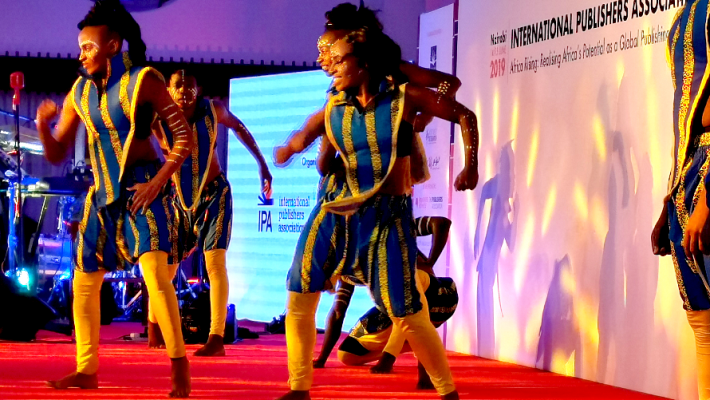 Members of the Sarakasi Dancers entertain delegates to the 2019 IPA Africa Seminar at Nairobi in its gala closing dinner on June 15. Image: Porter Anderson

‘We Have Made a Commitment With Africa’

In his address tonight (June 15) closing the second annual International Publishers Association‘s (IPA) “Africa Rising” seminar in Nairobi, the organization’s president, Hugo Setzer, has announced that Marrakesh will be the venue for the 2020 event in the IPA’s Africa Seminar series.

“We have a commitment with Africa,” Setzer confirmed from the podium before the Sarakasi Dancers and Gogosimo Band took the stage of the closing gala. “And we’re coming next year.”

Setzer made a point of thanking L’Union professionelle des éditeurs du Maroc, the IPA member-association of Morocco, which will assume the extensive host duties carried out by the Kenyan association this time, and representatives of the Moroccan group were in Nairobi for the evening.

Setzer stressed that the world association, founded in 1896 as the International Publishers Congress, has never lost the centricity of gatherings implied in that original name.

“Our founders realized that organizing such meetings was the way to bring people together, to build bridges, and to work more closely with a local host-member” association—in this case, the Kenya Publishers Association led by Lawrence Njagi.

So it was that the IPA’s undertaking has revealed in the Kenya program two over-arching realities in the discussions onstage and off, of its delegates from as many as 50 nations and every sector of the publishing business. 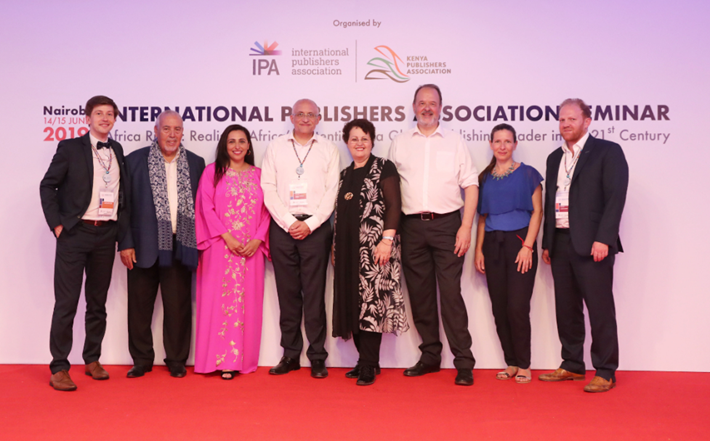 First, as mentioned in Publishing Perspectives‘ “Day Two” article, there’s an urgent demand in many African markets for the rejuvenation and preservation of endangered indigenous languages. Whether it’s reflected in the need to teach children in their first languages or in the perfectly straightforward reality that languages captured as literature can gain traction in a world of English and other dominant languages, the issue came up again and again.

Second, what became clear is that many African book markets are tied closely to their governmental regimes. Some of this has to do with the centricity of education in much publishing in the region, of course. More subtly, populations which traditionally were geared to the ministrations of colonial governance may not easily adapt to more entrepreneurial commercial responses, the kind of do-it-yourself startup efforts that are more popular in many Western markets.

There’s an attendant irony in the fact that the most nearly common languages for everyone are English and French. This is no one’s fault, of course, but the background geopolitical structures of these nations’ pasts still are, of course, relevant and instructive. Industry statistics for example, require buy-in from many stakeholders and, on the whole, are urgently needed in helping to define the potential of these markets, as Nielsen’s Andre Breedt had explained.

Another interesting undercurrent of what Setzer was discussing—the value of gatherings—was evident in the many meetings and conversations being held by African publishing players who hadn’t previously met. In the same way that it’s easy to think that everyone in a given book market knows each other, there’s a surprising amount of first-time communication developing in these IPA seminars among the publishing professionals of a vast continent who simply haven’t had many chances to become acquainted and compare notes.

“I’ve been in publishing now for 30 years” in Mexico, Setzer said, adding that his own first IPA conference was in 1988. Despite such a long record of conference experience, he said, the organizational hurdles that were overcome in Kenya and the caliber of some of the commentary from the stage and the floor here made the Nairobi event a standout. 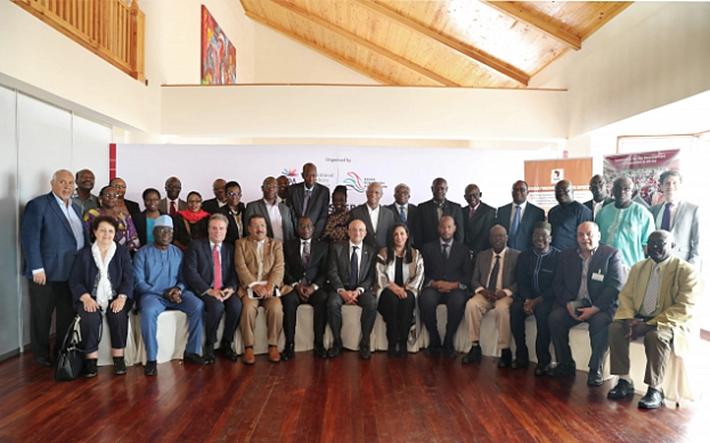 Prior to the start of the 2019 International Publishers Association’s Africa Seminar in Nairobi, leaders of 40 African publishers’ associations gathered for signings of agreements between IPA, the African Publishers Network and the Association for the Development of Education in Africa. Image: IPA

It won’t be a surprise to regular readers of Publishing Perspectives that the International Publishers Association is bolstering its still-new Africa Seminars series with various organizational liaisons to support and amplify those events’ impact.

The IPA gained new energy during the two years of Michiel Kolman‘s presidency, with Setzer at that point serving as president. Kolman’s tenure both moved the organization’s stance closer to that of the associated organizations centered in the European system and opened a new level of issue-driven intent. Even now, Kolman, an Amsterdam-based executive with Elsevier, serve’s as the IPA’s envoy on inclusivity and diversity.

With Setzer’s arrival as president—and the indefatigable program-building initiatives of Bodour Al Qasimi as vice-president—the IPA has moved quickly into an even higher gear, and is deliberately rooting its efforts in sustainability.

To that end, before the first word was even spoken at the Nairobi seminar, the IPA leadership brought together their counterparts in the African Publishers Network (APNET) and the Association for the Development of Education in Africa (ADEA) for signings of two memoranda of understanding (MoU)—the favored diplomatic tool of the IPA at the moment to get on-record the mutual support of the Geneva-based world body and these regional powers.

Agreements that stand behind these MoUs speak not only to the Africa Seminar series events but also to the central importance of such issues as education and literacy in the regional markets.

With some 40 African publishers’ association leaders on hand, the pre-conference event established the seriousness with which every player is expected to interact with this bracing, continent-wide effort to bring the African national markets and regional cultures into profitable and productive postures at home and to find them new footing on the world stage in literature and publishing commerce.

In prepared comments from the pre-conference signings of the memoranda, we hear from the three organization’s top representatives.

From Samuel Kolawole, chair of APNET, the African Publishers Network:

“Today’s signing of a memorandum of understanding between APNET and IPA is a historic and important event on many fronts. It signifies the intention of IPA to engage African publishers on the level of mutual respect.

“It marks the formalization and documentation of a cooperation that seeks to address issues facing African publishing from inside out by engaging stakeholders to establish the issues and generate solutions, rather than bringing solutions from outside the continent.

“This is a cooperation that will impact positively, not only on the business of publishing in Africa, but also on the quality of education across Africa.”

From Albert Nsengiyumva, executive secretary of ADEA, the Association for the Development of Education in Africa:

“The signing of the memorandum of understanding with IPA is an important milestone for ADEA, particularly in relation to improving quality of education through improved or enhanced teaching and learning.

“ADEA as a whole considers the issue of national books and the reading culture as one key to unlock the challenges of quality of education in Africa.

“It’s therefore important that, following this signing, we both take the opportunity to come up with concrete actions that will support, on the one side, the African publishing industry, and, on the other side, making sure countries put in place instruments that will support the national book industry and everyday culture in particular.”

And from Setzer for the IPA:

“In recent years, IPA has stepped up its commitment to our African members.

“Today’s historic agreements with our associate members APNET and ADEA show that we are committed to walking the walk and not just talking the talk.

“All the right ingredients are present in so many African nations for thriving publishing industries that will drive education and share the diversity of cultures this wonderful continent has to offer.

“IPA will continue to support African publishers as they realize that potential.” 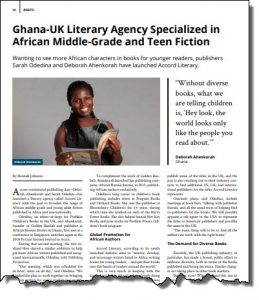 Our special magazine for the International Publishers Association’s (IPA) “Rising Africa” 2019 seminar has been printed by Modern Lithographic Kenya and was provided in print to delegates as the conference took place on June 14 and 15 in Nairobi.

We hope you’ll download a free copy here in PDF and join us in welcoming these annual IPA Africa Seminars events.

Publishing Perspectives is glad to be the program’s media partner.