During the Berlin Book Days events this week, the Börsenverein has praised Salgado for ‘raising worldwide awareness for the fate of laborers and migrants as well as for the living conditions of indigenous peoples.’

‘How Fragile Our World Has Become’

In a move that will surprise some, the Börsenverein des Deutschen Buchhandels—Germany’s publishers and booksellers association—has named a photographer the recipient of the 2019 German Book Trade Peace Prize.

Brazilian photographer Sebastião Salgado has been named today (June 18) by Börsenverein chair Heinrich Riethmüller at the opening of the 2019 Berlin Book Days event at the Ellington Hotel Berlin in Nürnberger Strasse.

While the announcement has been made today, the actual award ceremony will take place on the final day of the Frankfurter Buchmesse, October 20, at the Church of St. Paul in Frankfurt am Main. The ceremony, as is the tradition, will be broadcast live on German public television.

As Publishing Perspectives readers will recall, the Peace Prize has been awarded since 1950 and is endowed with a sum of €25,000 (US$28,003.). Last year’s recipient were the husband-wife team 0f Aleida and Jan Assmann.

The official statement of rationale for the selection of Salgado calls him “an exceptional visual artist who has continually campaigned on behalf of peace and social justice and whose entire photographic oeuvre lends a sense of urgency to the global debate surrounding nature conservation and environmental protection. 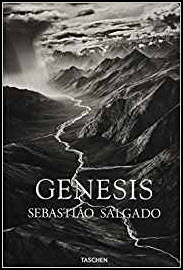 ‘Genesis’ was published in an edition by Taschen in March

“With his ongoing work at the ‘Instituto Terra,’ he also continues to make a direct contribution to the restoration and revitalisation of biodiversity and ecosystems.”

“The photographs of Sebastião Salgado,” according to media messaging from the Börsenverein today, “have been showcased in innumerable exhibitions and books, many of which show communities strongly rooted in their traditional natural environments, while others portray individuals violently uprooted by war and climate catastrophe.

“As a consequence of his considerable body of work, Sebastião Salgado has succeeded in raising worldwide awareness for the fate of laborers and migrants as well as for the living conditions of indigenous peoples.

“Salgado offers us the opportunity to recognize our planet as a habitat for living creatures, that is, as a home that does not belong to us alone, and one that we must take every effort to preserve.” 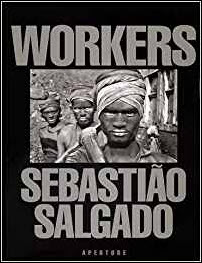 ‘Workers’ was published in 1993 by Aperture/Aufage

Sebastião Ribeiro Salgado was born in 1944 in Aimorés in the Brazilian state of Minas Gerais and moved to Paris in 1969. In 1971, Salgado worked as an economist and oversaw the development of aid projects in Africa, where he discovered his passion for photography.

In 1973, he left his job to devote himself entirely to the craft.

The trajectory of  his career has run along humanitarian lines, as he produced work in  the context of (and often cooperation with) Doctors Without Borders, UNICEF, UNESCO, and Reporters Without Borders. As the Börsenverein’s announcement reads, “The books Migrations and The Children: Refugees and Migrants, both of which were published in 2000, drew attention to the fate of 30 million displaced persons worldwide and raised money for the children’s charity organization UNICEF.” 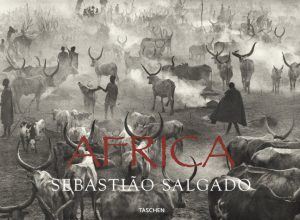 ‘Africa’ was published in 2007 by Taschen

Having created a 680-hectare nature reserve and founded their nonprofit Instituto Terra. Since then, they’ve planted 2.7 million trees and succeeded in returning almost the entire forest to its original state, including a great diversity of plant and animal life.

In the 1990s, Salgado also increasingly turned his attention to landscape photography, producing the works Africa (2007) and Genesis (2013). In Genesis, “he sought to capture his impressions of untouched environments, the animals living there, and groups of isolated indigenous peoples, all in an attempt to show how fragile our world has become,” the Börsenverein says.

In addition to the German Book Trade Peace Prize, Salgado has received numerous other awards for his work, including:

In 2016 Salgado become a member of the Académie des Beaux-Arts of the Institut de France, one of the most important cultural honours in France. Sebastião and Lélia Salgado live in Paris and have two sons, Juliano and Rodrigo.

More from Publishing Perspectives on industry awards is here, and more from us on the German book market is here. More on Frankfurter Buchmesse is here.