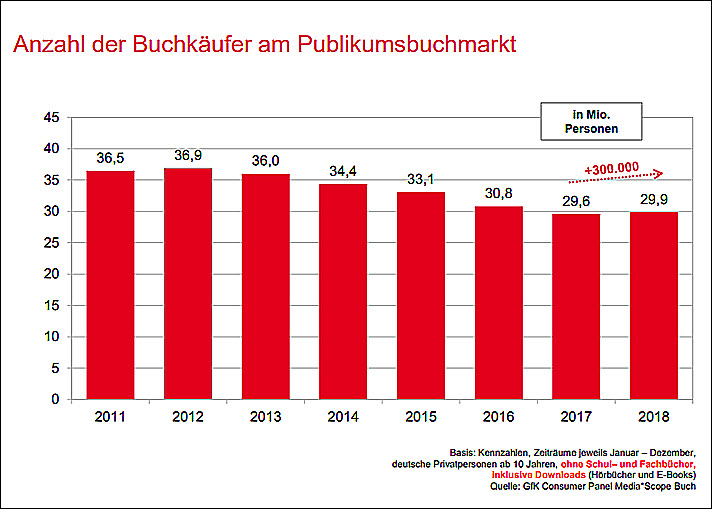 The German book market is seen as having grown last year for the first time since 2012—by 300,000 buyers—with its financial performance leveling out. 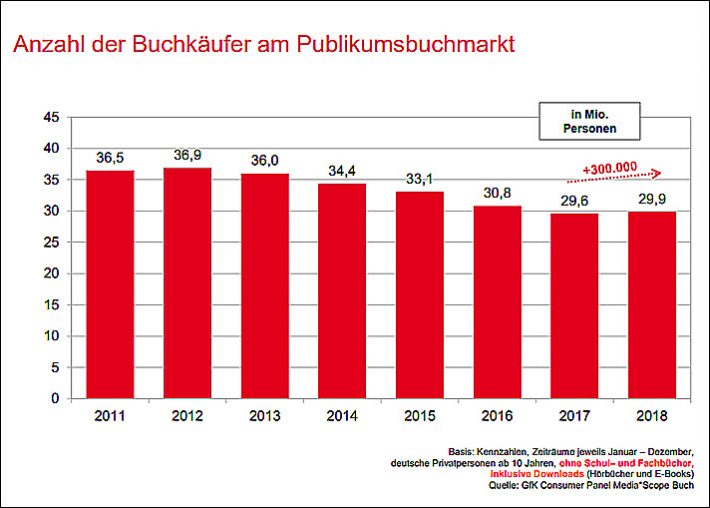 Biggest Jumps Among Buyers 20 to 39

Last year is being called a turning point in the German book market by Alexander Skipis, managing director of the Börsenverein des Deutschen Buchhandels—Germany’s publishers and booksellers association. 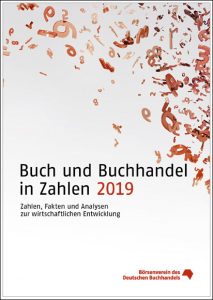 In its new report, Books and the Book Trade in Numbers (in German, of course), to be published in August, statistical analysis will show, the Börsenverein reports today (June 6) that the number of book buyers in the market rose for the first time since 2012 and by some 300,000 consumers in 2018 with revenue levels seen stabilizing.

And the organization says that age demographics are particularly important here. The largest increases reportedly came in those age groups in which the book industry had lost the most buyers in recent years. The number of buyers rose by:

Industry turnover is reported to have evened out in in 2018, with book industry revenue coming in at €9.13 billion (US$10.3 billion), which was relatively flat by comparison to 2017’s numbers roughly the same level as in the previous year.

In the first five months of 2019, revenue from the industry’s key distribution channels increased by 4.1 percent, with the volume of sales rising by 1.7 percent. 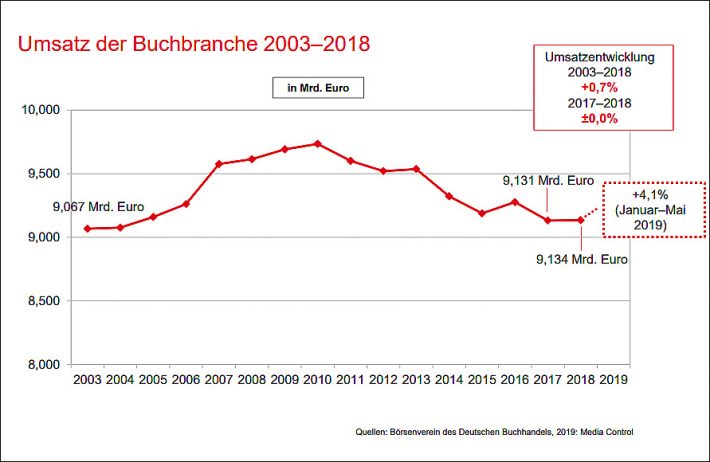 The Börsenverein des Deutschen Buchhandels has provided some very helpful breakout points from the 2018 report, and we want to share some of those with you here.

With revenues of €4.27 billion (US$2.8 billion) and a market share of 46.8 percent, the stationary book trade remained Germany’s largest distribution channel for books in 2018.

Sales at physical bookshops fell by 0.7 percent in comparison to the previous year. Online sales revenues for the book trade–including the online businesses of stationary bookshops–continued to increase, with the trade reportedly making €1.78 billion (US$2 billion) through online shops, 4 percent more than in 2017.

Product Sales Trends in 2018 by Category 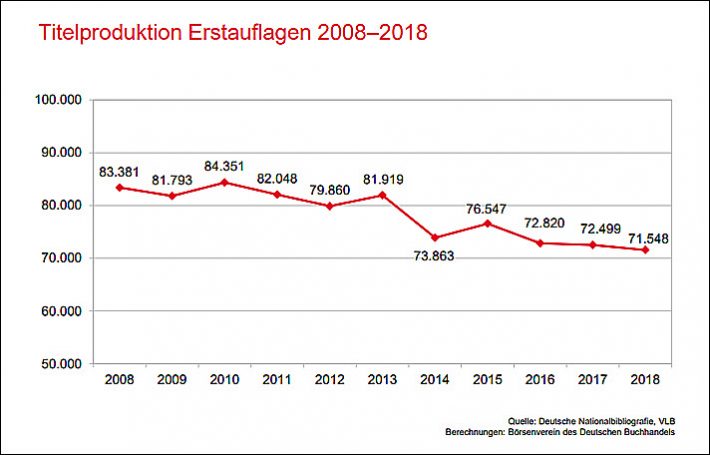 “In 2018,” the Börsenverein reports in its media messaging, “the number of new book titles issued by publishers continued to decline. 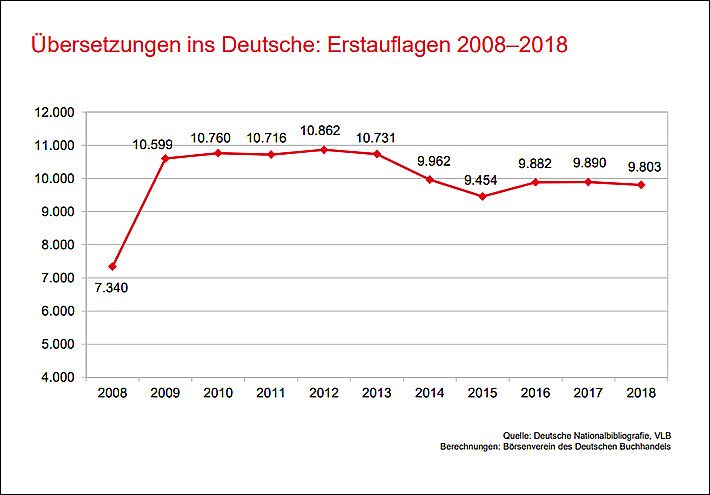 The share of translations of first editions was almost entirely unchanged at 13.7 percent.

The number of translated titles remained in line with the production of overall titles, and at 9,803 it was only slightly under the previous year (9,890).

The most important source languages continue to be English, French and Japanesein the German market, according to the report.

The sale of licenses abroad remained stable at the relatively high level of 7,844 titles (2017: 7,856 titles). Once again, children’s literature saw the largest share of licenses sold (36.8 percent), but the number of licenses in that sector actually fell (down 5.0 percent to 2,886).

Ebooks at 5 Percent of German Market in 2018

In 2018, revenues from ebooks in the private consumer market–excluding textbooks and specialist books–rose by 9.3 percent.

In addition, a trend toward buying less expensive ebook titles continued: in 2018, buyers spent on average only €6.19 per book (US$7.00) –some 3 percent less than in the previous year

‘A New Form of Approaching Customers’

In a prepared statement on the release of the report, Skipis is quoted, saying, “2018 marks a turning point in the German book industry.

“The results of the ‘Book Buyers – quo vadis?’ study we issued last year prompted many publishers and bookshops to take action. The study asked individuals why they no longer bought books, and respondents all across the board answered that while they valued books and reading very highly, they had simply lost sight of them due to the stresses and pressures associated with everyday life and social media. Respondents noted that they lacked the time to read, had few contact points to books and felt a sense of disorientation among the large array of choices.

“These findings led to an increasing awareness among the book industry that a new form of approaching customers was going to be necessary. Publishers and bookshops have now started enhancing their proximity to customers and creating new ways of raising enthusiasm for books. These include new store concepts, creative event formats, social media initiatives, new storytelling formats and innovative publishing programs.

“We are also working across the entire industry on developing a modern, customer-friendly orientation system for the book trade as well as on improving the image of book reading in general.”

And Heinrich Riethmüller, chairman of the Börsenverein, says, “The book market remains stable despite growing competition from other media.

“Publishers and bookshops are helping to shape the dynamic development of media, and the online book trade is increasing in significance.

“Stationary bookshops continue to grapple with such issues as rising rents, detrimental inner-city developments and problems in finding a new generation of booksellers to succeed them.

“Bookstore owners are trying out new shop ideas and event concepts as a way of attracting potential buyers and winning them over as customers.”

More from Publishing Perspectives on the German book market is here.