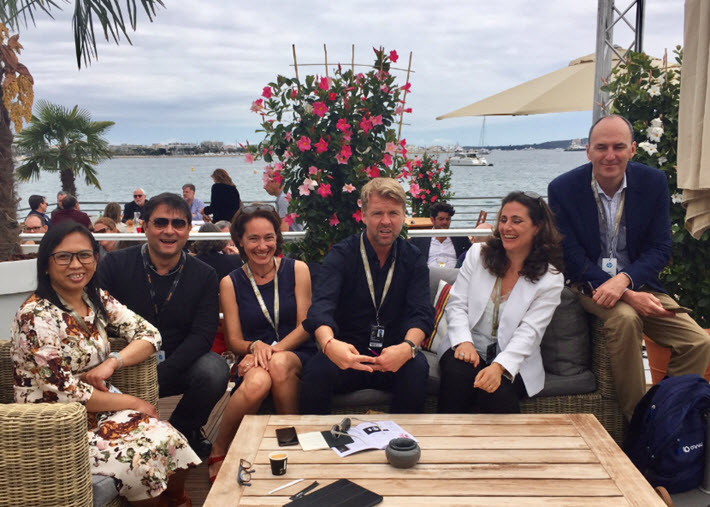 On the first tour to Cannes of publishers and literary agents, Norway’s Thomas Mala says the experience was worthwhile. He’s ready to go again next year, offering film rights to producers. 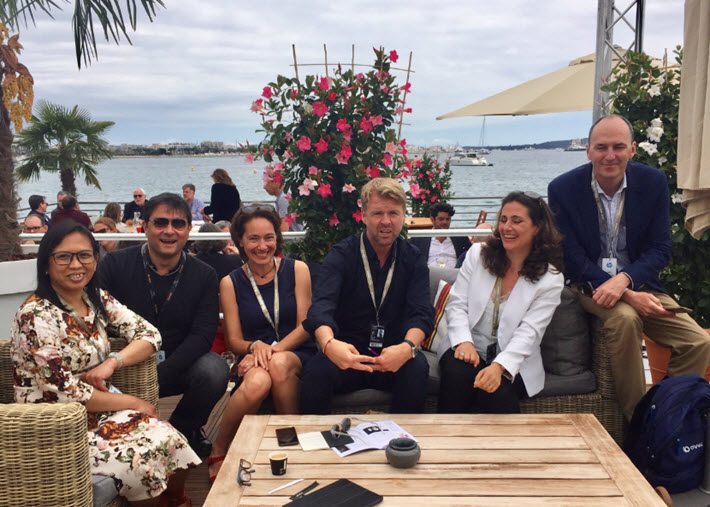 In Cannes, Frankfurt’s key partner is the Société Civile des Editeurs de Langue Française (SCELF) and the Institut Français, in cooperation with Marché du Film and the Festival de Cannes. The pitching event is called Shoot the Book, and the networking event is the Shoot the Book Rendezvous.

And in opening this event to a selected group of pitching publishers, Frankfurt took another step in its rapid development of its book-to-screen elements, in alignment with the fast growing trends in world markets.

Frankfurt president and CEO Juergen Boos, who was in Cannes, has defined this new experiential program for publishers at the film festival as a chance to “establish even closer business ties between the German publishing industry and the international film business.

“Our aim,” he says, “is to increase international awareness about publishers and authors, ensuring that their books receive attention in the film industry. Film adaptations have always been one of the key ingredients for international blockbusters.”

Similarly, as Ben Croll reported at Variety, the Shoot the Book program is growing, as well. “A fixture in Cannes since 2014,” Croll wrote, “Shoot the Book has also spread to festivals and markets in Los Angeles, Shanghai, and Annecy.” Indeed, those locations are set with their own dates for the program this way:

“Our aim is to increase international awareness about publishers and authors, ensuring that their books receive attention in the film industry.”Juergen Boos, Frankfurter Buchmesse

The big move for the program this year at the festival was the inclusion of the networking session that brought together as many as 40 publishers, half from France, with producers for three hours of meetings in the Salon des Ambassadeurs.

“Since 2017,” Croll writes, “the selections have broadened to include select publishers from Germany, Georgia, Norway, and Canada, always reflective of that year’s country of honor at the Frankfurt Book Fair. Moreover, Shoot the Book’s programing slate has also expanded; it now hosts film-financing workshops, B2B sessions, and networking events alongside the pitches.”

Frankfurt’s group of publishers on its two-day tour to Cannes for this year’s Shoot the Book events comprised: 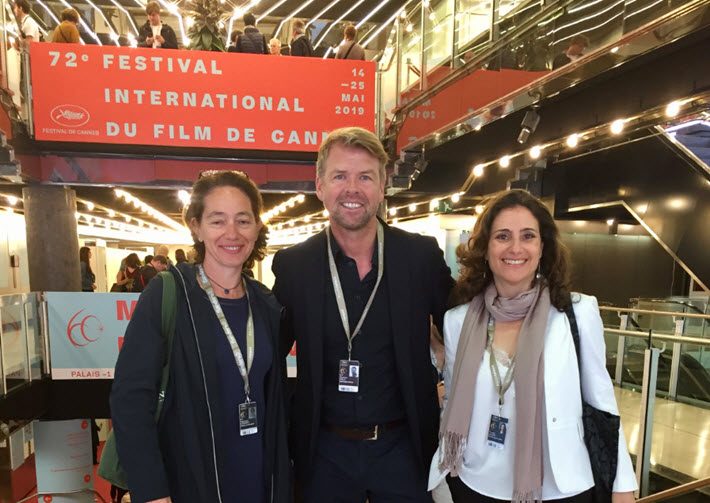 Publishing Perspectives wanted to speak with Northern Stories’ Thomas Mala about his reactions to the tour, not least because Mala is a veteran of the Books at Berlinale program and knows his way around the process of pitching content to filmmakers.

We start by asking Mala how he found the Cannes/Frankfurt Shoot the Book session on May 21 compared to the annual Books at Berlinale program–and we got a big cheer from him for Shoot the Book’s one-on-one “Rendezvous” sessions.

Thomas Mala: Both Books at Berlinale and Shoot the Book are creating a meeting place for film producers and publishers and literary agents. They also are comparable in that they both have pitching sessions. The one at Berlin is a little more lively, but both fill the rooms.

They differ in how they organize it after the pitching session.

In Berlin, the pitching participants have a table where people can talk to them after the pitching session. In Cannes [with the Rendezvous session], the agents who participate in Shoot the Book have their own tables and three hours to fill with meetings. It’s an open schedule, in which producers also may request meetings.

This model makes it possible to have a lot more B2B meetings and creates more possibilities for business opportunities.

Publishing Perspectives: How did you choose  properties to take with you to Cannes to offer to producers?

TM: Going to these film festivals, you need to think through what kind of projects you’re taking. Most of the producers participating in these meetings and pitching sessions don’t come from the big production companies, but smaller and independent companies. This means I’m not taking a big epic drama which would mean lots of locations and characters–that would be too expensive for most of them.

To Cannes, I took a project taking more or less place inside a car. Sverre Henmo’s Going Home. In the book, a weekend at a cabin in the mountains is abruptly interrupted when a couple receives a phone call. The woman’s son, 15, has fallen critically ill. We’re following them in the car toward the hospital, getting closer and closer, chapter by chapter. Tension arises, and we witness the relationship slowly deteriorate. Parallel to their ride to the hospital, we follow their story backward in time until they first met, falling more and more in love.

The structure of the book, the short chapters, and the almost thriller-esque story, makes this for an excellent candidate to dramatize.

PP: And how did Henmo’s book go over with producers?

TM: The book clearly resonated with several producers, and they’re considering it now.

PP: How do you feel the reception from filmmakers and producers is to Nordic material right now, overall?

“This is an ongoing process of getting to know more and more producers and understanding what each one of them is looking for.”Thomas Mala, Northern Stories

TM: Interest in Nordic material is very good at the moment. In Norway, we have several authors who are doing extremely well around the world at the moment–Jo Nesbø, Maja Lunde, Åsne Seierstad, Per Petterson, and others. The success of these and other Nordic names clearly makes our markets attractive for projects in film and television.

Also, the great Nordic televisino series–Broen (The Bridge), Forbrytelsen (The Killing), Skam and so on–have shown that we do have the material. Who doesn’t want to be part of that?

PP: Do you feel that this trip to Cannes is something you can follow up on at Frankfurt during Guest of Honor Norway?

TM: Yes, this is an ongoing process of getting to know more and more producers and understanding what each one of them is looking for.

PP: How did you find it being at Cannes during the festival? Was this your first time? Any insights or observations?

At film festivals, “They’re all looking for content–which we can gladly provide.”Thomas Mala, Northern Stories

TM: This was my first time at Cannes, and I hope to be a part of it next year as well. Well organized, lots of meetings, and fun as well.

The challenge for all these film festivals is to get enough interesting and big enough producers to attend. We need to get them to understand that this could be a marketplace for them as well. They’re all looking for content–which we can gladly provide.

PP: Tell us about another property two you feel is worth international attention at this point.

TM: There’s is a strong interest in narrative nonfiction at the moment. And one of our books attracting a lot of attention is from the author Anders Bortne: Sleepless. A Thousand Wakeful Nights, One Solution. The world English rights were just sold to Sandstone Press [the Scottish publisher of Jokha Alharthi’s Man Booker International Prize-winner Celestial Bodies in Marilyn Booth’s translation] and the Danish rights to Gads Forlag.

The author has been struggling with sleeplessness for 16 years and sets out to find a cure. The book is an exciting, fun, and wise one for anyone who ‘s awake at night and is wondering why. And for those sleeping next to them. 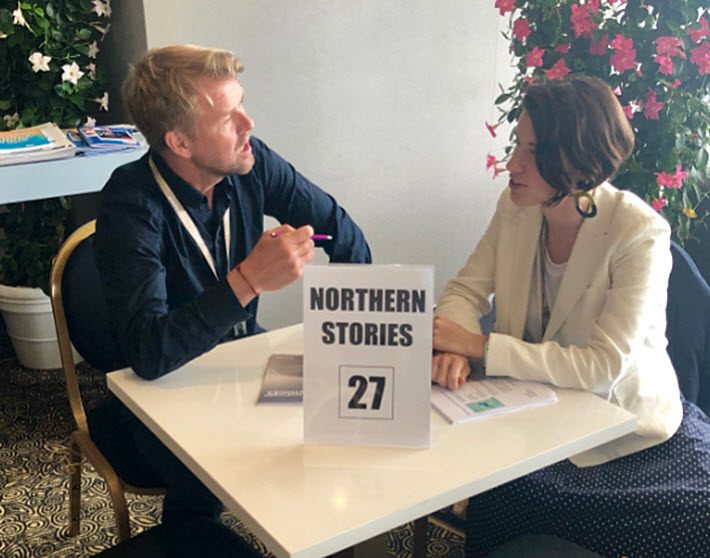 More from Publishing Perspectives on taking books to screens is here, and more on the Frankfurter Buchmesse is here.