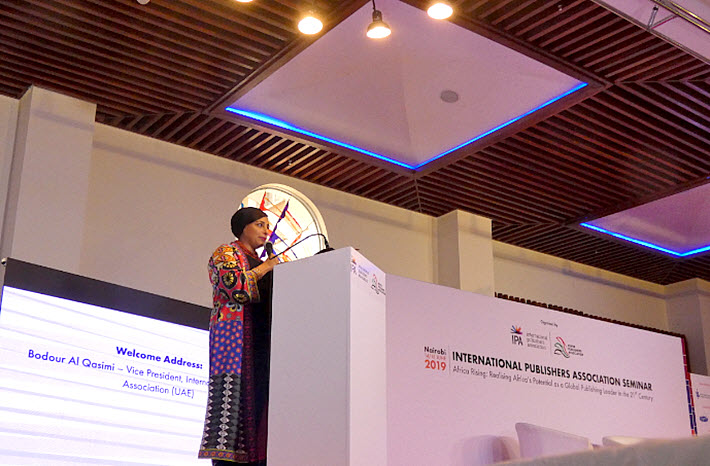 Africa is ‘one of the most under-represented regions in global literature,’ Bodour Al  Qasimi tells IPA’s Nairobi seminar. ‘We want you to reverse these facts.’ 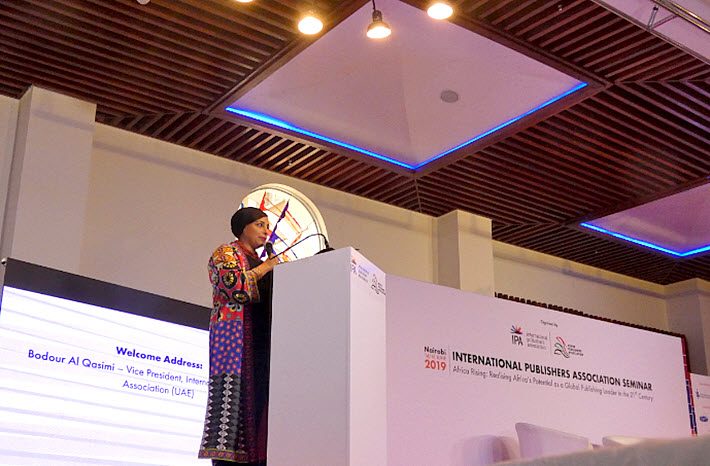 ‘Your Voices. Your Stories’

In her address opening the final day of the International Publishers Association‘s (IPA) “Africa Rising” seminar in Nairobi, the United Arab Emirates’ Sheikha Bodour bint Sultan Al Qasimi spoke of her own travels that showed her “that the human family is still suffering from deeply entrenched misconceptions, unconscious biases, and stereotypes.”

In an aptly delivered moment, Bodour said, “I think the continent of Africa has had its fair share of stereotypes and generalizations. And it’s frustrating isn’t it?”

Bodour is the vice-president of the IPA and the organization’s leadership member who has led the development of the Africa Seminars series, which opened last year with a symposium in Lagos.

Murmurs of welcome recognition coursed through the room, as a bond of empathy fell into place between the speaker and her audience.

This is what the IPA’s Africa Seminars series is intended to address: What can the international publishing community do to facilitate, enable, and promote the growth and prominence of the dizzyingly diverse literary and commercial needs of the book business in the African markets?

This seminar series carries the bold mission statement of “transforming the future of African publishing.” It’s a major commitment for the International Publishers Association and, to a person, the leadership is engaged and on-site this weekend, working hard to stage this complicated exercise in international industry development—precisely what a world organization of publishing associations is uniquely positioned to do.

Below in three sections is the complete text of how Bodour has talked about this to the symposium’s audience today in Nairobi at the event, which locally is hosted by Lawrence Njagi and the Kenya Publishers Association:

Habari za asubuhi. [Swahili: Good morning.] Some of you might know that I was a student of anthropology in university. I was fascinated by the origins of human kind. I was curious to understand the complexities of culture across human history. It’s a captivating world.

Anthropology might look dry for some people, but in fact it’s a fascinating topic that allowed me to learn how and why people behave so differently in different cultures.

After my graduation, I took off to see the world. I wanted to experience the world in practice, not just in theory. With a heart full of wonder, I began a journey of travels that took me to the four corners of the world.

Every trip was a discovery. Every country I visited contributed something to who I am today. I witnessed the beauty of us, humans, in too many ways to count. My hands touched the richness of human experiences on the walls of centuries-old buildings.

I drank history in the little old coffee shop hidden away in a narrow alley in a historic city. I learned stories of human glory and honor, of struggle and emancipation, through graffiti and street art. I was so blessed to have had the chance to travel and learn and connect deeply with fellow human beings from around the world.

My knowledge about the world grew with each trip. But so, did, my frustration.

What I also learned from my travels is that the human family is still suffering from deeply entrenched misconceptions, unconscious biases, and stereotypes.

We still don’t celebrate the uniqueness of each one of us enough. In many ways, we’re still imprisoned by our fears of people we don’t understand.

Some of us still hold on tight to false and cartoonish images about each other—images that are reinforced by mainstream media, commercial movies, and agenda-driven authors.

And I’m not sure about you, but I think the continent of Africa has had its fair share of stereotypes and generalizations. And it’s frustrating isn’t it?

It was certainly frustrating to the late, great Kenyan author Binyavanga Wainaina, who sadly left this world at a young age last month. His most celebrated essay, called “How to Write About Africa,” reflects a deep sense of frustration and desperation about how people outside Africa persist in seeing this great continent with blinders and narrow mindedness.

Africa is home to the highest quantities of rare gems and natural resources in the world. But Africa has more than diamonds and oil to offer us.

It has wisdom. Culture. Diversity. Philosophy. History. And it’s abundant with stories that can enrich our human spirits. Yet it’s one of the most widely misunderstood regions in the world. It’s also one of the most under-represented regions in global literature and culture.

We want you to reverse these facts.

Thankfully, there’s a surge of African writers and artists who are taking the world by storm. They’re fighting an unfair battle against established notions of cultural superiority and universal status quo. They’re doing a great job sharing Africa’s stories. But  they’re not enough.

“We want to help you seize all the opportunities of cultural globalization and publishing digitization to gain presence in the mainstream global culture.”Bodour Al Qasimi, International Publishers Association

The diversity you bring to the global family is what we most cherish. And we at the IPA welcome this diversity, and encourage it. We strive to be as representative of everyone as possible.

This is why we encourage you—all the African publishers attending with us today—to do whatever it takes to support African authors, to tell Africa’s story. Because if you don’t tell your story enough, someone else is going to tell it on your behalf.

And this is one of the reasons we’re here in this seminar series today. We understand there are challenges facing African publishers. We realize that each African country has a unique set of challenges in publishing, and we know that the journey of transformation is long and arduous.

But we are here to tell you that you will not walk it alone.

Through IPA’s Africa Seminar series, which we started last year in Lagos, we aim to give you momentum. We want to help you seize all the opportunities of cultural globalization and publishing digitization to gain presence in the mainstream global culture. 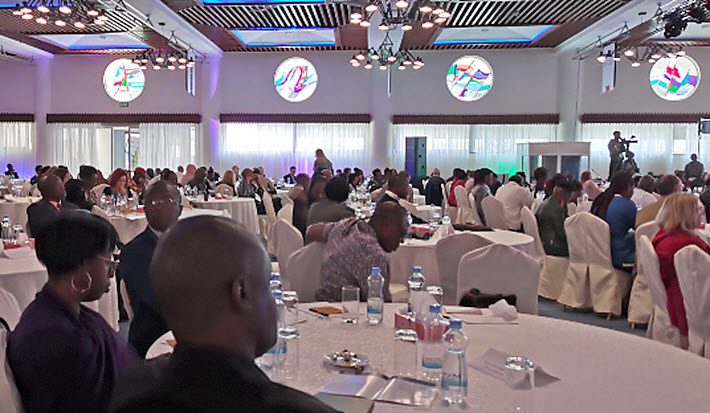 Delegates to the 2019 IPA Africa Seminar program in Nairobi listen on June 15 to morning commentary from the stage. Image: Porter Anderson

“Everyone is equally responsible about the outcome. And as the African publishing sector progresses, everyone is going to be a winner.”Bodour Al Qasimi, International Publishers Association

Through action-oriented projects, we aim to support you to leave your challenges behind, and walk with confidence into a better future.

Through continuous engagement with members of IPA’s committees, we want to support you in upholding IPA’s most cherished values such as copy right, and freedom to publish.

It’s a two-way collaboration. Everyone is equally responsible about the outcome. And as the African publishing sector progresses, everyone is going to be a winner.

We just signed an important deal with Dubai Cares to the tune of $800,000 over four years to expand IPA’s programs in Africa in education and publishing. This is great news. Through this grant we’ll work on projects that tap into:

We’re also working with partners and sponsors to make sure this series is sustainable for years to come, because we understand that change requires time and continuous conversations.

So I want to thank each and every one of our sponsors and partners for making these seminars possible.

As Lazarus Takawira from Zimbabwe, said about his dreams of the future of Africa in his great book, Imagine Africa, “Evocative is our history but exciting is our future”

I am  very excited  about  the  future of the African publishing industry. And, I’m most hopeful that together, we can realize Africa’s potentialas a global publishing leader in the 21st century. 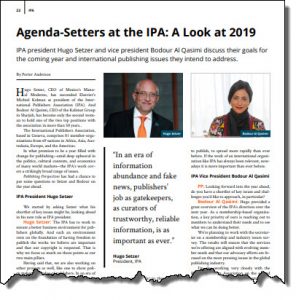