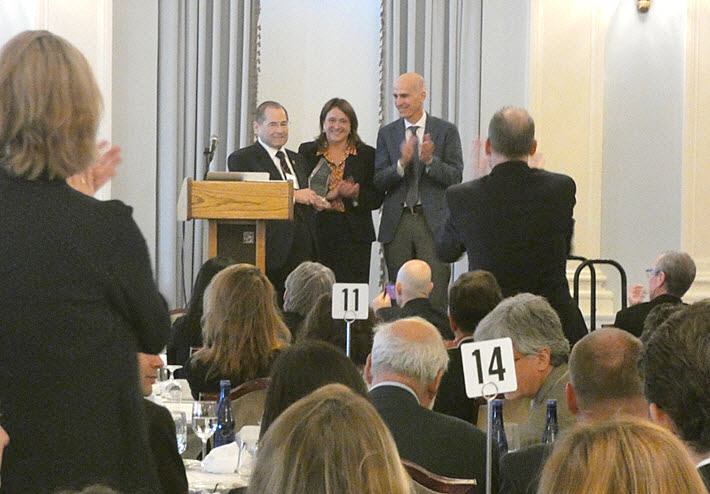 Just hours after Rep. Jerry Nadler (D-NY), chairman of the powerful House Judiciary Committee told the Association of American Publishers‘ (AAP) annual general meeting on Monday (June 3) that a major announcement would be forthcoming from the committee, the news media were trumpeting what he’d alluded to.

“The House Judiciary committee said Monday,” wrote Brian Fung for CNN Business, “it is launching a ‘top-to-bottom’ antitrust investigation of the tech industry, including Amazon, Apple, Facebook, and Google, deepening a crisis for Silicon Valley’s largest players as they face mounting scrutiny in Washington over their power and influence.”

The New York Times’ Cecelia King, David Streitfeld, and Annie Karni, wrote about the widening pool of investigations of Big Tech: “Regulators are divvying up antitrust oversight of the Silicon Valley giants and lawmakers are investigating whether they have stifled competition and hurt consumers. After a spate of unusual negotiations, the Justice Department has agreed to handle potential antitrust investigations related to Apple and Google, while the Federal Trade Commission will take on Facebook and Amazon.”

One of the speakers in that Times report, Sarah Miller, directs the Open Markets Institute. And at the AAP’s meeting Monday, the institute’s enforcement strategy lead, Sally Hubbard, had spoken just before Nadler, noting that speculation had developed in the press in the preceding few days about possible investigations. Asked about Mark Zuckerberg’s strategy, she said, “I don’t think the government should take too many cues from Facebook in terms of what should be done to regulate them.”

In her main comments, Hubbard told the publishers, “As an industry, you’ve been experiencing tremendous change at a time when [challenges] to freedom of speech are taking on new and pernicious dimensions.

“You’ve dealt first hand with monopoly power, and you’ve seen monopoly aggregate, commodify, and devalute the written word. You may be struggling to maintain bargaining power, as some of the platforms demand you do business on their terms. You’re not alone in this struggle. It pervades the entire global economy.” 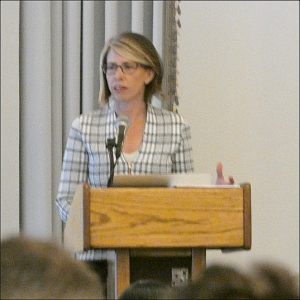 The good news, Hubbard said, “is that we have the solutions. We’ve been here before.” Despite monopolies, she said, “We can make our democracy and our economy work for everyone again. But if we don’t act now to change the structure of our markets, titans will continue to rule the economy, dictate the terms of dealing, control speech, and pick the winners and losers.

“Even worse,” Hubbard said–perfectly setting up Nadler’s appearance–monopolies’ “economic power will by ever-increasing political power. We must fight monopoly to save democracy.

And in introducing Nadler’s comments, AAP president and CEO Maria Pallante with the association’s board chair, Tim Bozik of Pearson, gave the congressman from New York the association’s 2019 Award for Distinguished Public Service. In her remarks, Pallante praised, “Jerry’s support for a robust and modern copyright system with meaningful protections, reasonable limitations and effective enforcement,” all of which she said “has been thoughtful and unwavering.”

“Like our industry,” she said, “Jerry is intimately familiar with creativity and intellectual curiosity … a passionate and articulate steward of the US Constitution and American democracy.”

Pallante thanked him “for your friendship to the publishing community and for your tireless leadership.”

Nadler, 71—who is better known at the moment as one of the House committee chairs pressing that chamber’s new Democratic-led oversight of the Donald Trump administration—was applauded loudly and at length by the AAP’s membership gathering of several hundred people in the Yale Club’s ballroom. 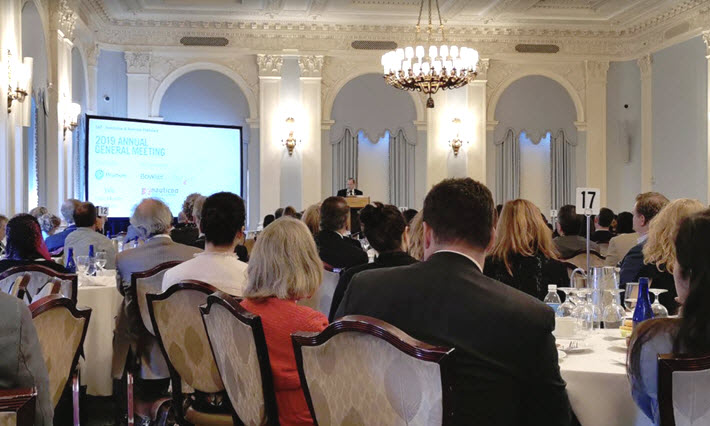 In making his comments, Nadler got right to the point of his legislative and committee interests, thanking the AAP “for all you to do protect creative expression.

“I especially want to thank Maria Pallante,” he said, who prior to taking up her post with the AAP in January 2017 served for more than five years as the 12th register of copyrights in Washington’s US Copyright Office. During her tenure there, he said, “I was fortunate to work with her when she led the Copyright Office, and she provided valuable advice and expertise for congressional efforts to modernize copyright.

“An effective copyright system enables a broad range of independent and diverse voices to emerge, secure in the knowledge that they will be rewarded for their efforts.”Rep. Jerry Nadler, D-New York, District 10

“As chairman of the Judiciary Committee, I’m committed to assuring you,” he told the publishers, that there will be a strong and vibrant system” in the United States, one “that creates jobs and [supports] a diverse range of views. Today, core copyright industries contribute nearly US$1.2 trillion to the US economy each year and employ more than 5.5 million workers.

“An effective copyright system enables a broad range of independent and diverse voices to emerge, secure in the knowledge that they will be rewarded for their efforts.”

It’s indispensable, he said, that “strong copyright law and a strong Copyright Office” be in place to defend the essential values of intellectual property. “And I will continue to work with my colleagues in Congress to ensure that strong copyright protections are in place for all creators.”

Alluding, then, to the announcement of the new House Judiciary probe of tech giants’ impact, he commended Hubbard’s comments from the Open Markets Institute and Nadler referenced the 1912 presidential election, which saw Woodrow Wilson of New Jersey unseat William Howard Taft and defeat Theodore Roosevelt, in that election cycle’s three-way race. He recalled Roosevelt’s position at the time that “bigness was inherent in the modern economy. Government should not oppose bigness” in corporate entities, “but that government must regulate it.”

Wilson’s position, by contrast, was that “economic dominance could not be tolerated,” Nadler said, “and monopolistic corporations that dominated industries had to be broken up, as well as regulated. That’s theoretically the view we have.

“But since 1976” and Robert Bork’s Antitrust Paradox assertion that keeping prices down was what counted, “that view has dominated our courts,” Nadler said, “and has led to where we are today.”

In the Times report, Nadler’s identification of the price problem is echoed this way: “This interpretation of antitrust helps big tech companies. It is difficult to argue that consumers are being robbed—the argument made by the Senate for passing the original antitrust laws more than a century ago—when companies like Google and Facebook do not charge users. Amazon prides itself on charging low prices,” as publishers know all too well.

In these brief comments, then, Nadler had signaled to the US trade publishing industry that the House Judiciary is now moving to look at the issues.

More on the Program 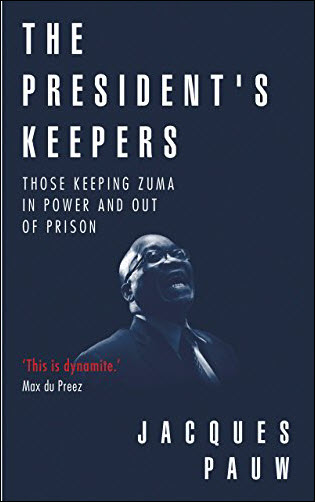 And the organization’s International Freedom to Publish Award was presented to NB Publishers, which produced The President’s Keepers: Those Keeping Zuma in Power and Out of Prison (October 2017) by Jacques Pauw, from its Tafelberg imprint.

That exposé of the Jacob Zuma government describes a “shadow mafia state” operating against political foes of the fourth president of the democratic era in the country and alleges deep levels of corruption.

And as Publishing Perspectives readers will recall, NB Publishers was shortlisted by the International Publishers Association’s Freedom to Publish Committee for its Prix Voltaire.

From South Africa, NB’s Eloise Wessel addressed the annual meeting in a videotaped message, praising the booksellers and journalists who joined the publisher in braving Pretoria’s displeasure with the book.

And those who’ll be attending the International Publishers Association’s “Africa Rising” seminar in Nairobi on June 14 andf 15 will be interested to learn that NB Publishers will be speaking during the course of the agenda. You can learn more about the seminar in our series of articles here.

More from Publishing Perspectives on the Association of American Publishers is here and more from us on copyright issues is here.