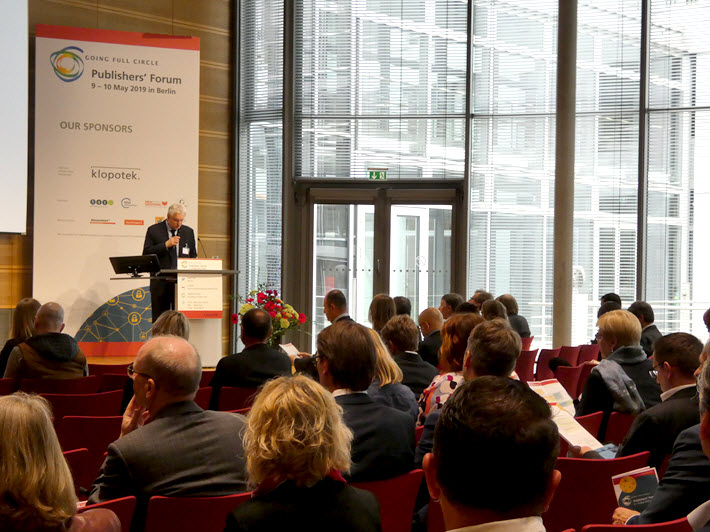 At the 16th Publishers Forum, one of Europe’s well-known book industry conferences, organizers say the event won’t continue, in part due to lack of participation from German publishers. 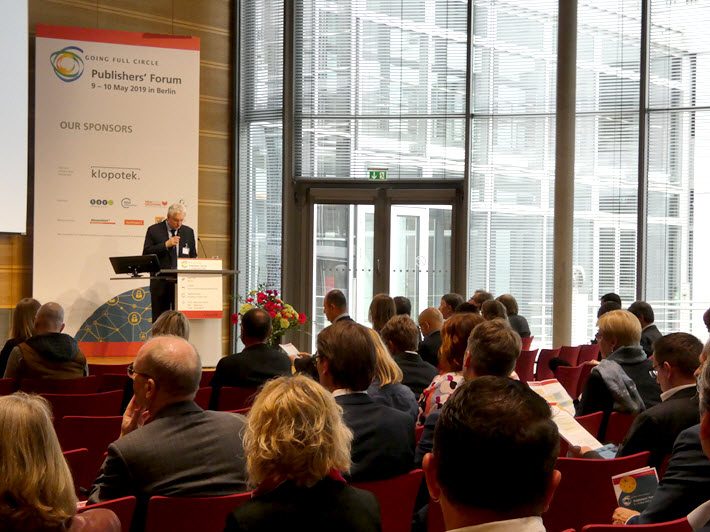 Klopotek managing director and CEO Ulrich Klopotek von Glowczewski opens Publishers’ Forum 2019 with the news that the company does not expect to stage a 2020 iteration of the long-running international conference. Image: Porter Anderson

A Major Conference Reconsiders Its Approach

The 16th international publishing industry conference in Berlin known as Publishers’ Forum has opened today (May 9) with the surprise announcement from Ulrich Klopotek that “There will be no Publishers’ Forum in 2020.”

Klopotek, the founding chief of the eponymous publishing software giant, told the audience that in the past three years, participation among members of the German publishing industry has fallen some 50 percent—even as interest and engagement has remained robust among international specialists and speakers who have readily flown to Berlin to engage.

In comments to Publishing Perspectives, Uli Klopotek says that he’s concerned to find that the executive decision-makers in some of the German publishing houses aren’t as keen as they once were to expose middle-management and younger executives to the international commercial thought and discussions taking place at the Publishers’ Forum.

The book industry in Germany has met with recent challenges, many of them covered by Publishing Perspectives, among them an alarming survey report of falling numbers in the book-buying base and the struggles of the wholesale and distribution corporation, KNV.

But some at the conference this week say they’re concerned that world publishing may be facing a greater challenge from the new power of digital and/or visual storytelling competition than some industry players may realize.

As conference director Rüdiger Wischenbart noted from the podium, the most forward-looking players in the business today see the coming rise of “the screens” and digital/streaming narrative entertainment as the next competitive challenge for book publishing in an era losing its taste for reading.

Indeed, the conference, in what we now know may be its last iteration, is built this year on the axis of what might be termed safety vs. outreach, normal practice vs. developmental efforts, or—as Wischenbart prefers to say it—core content vs. content diversity.

The programming is aggressive and informative, and those in attendance say they see this as a time to engage and exchange insights—a moment to understand the scenario ahead, not a time to retreat. 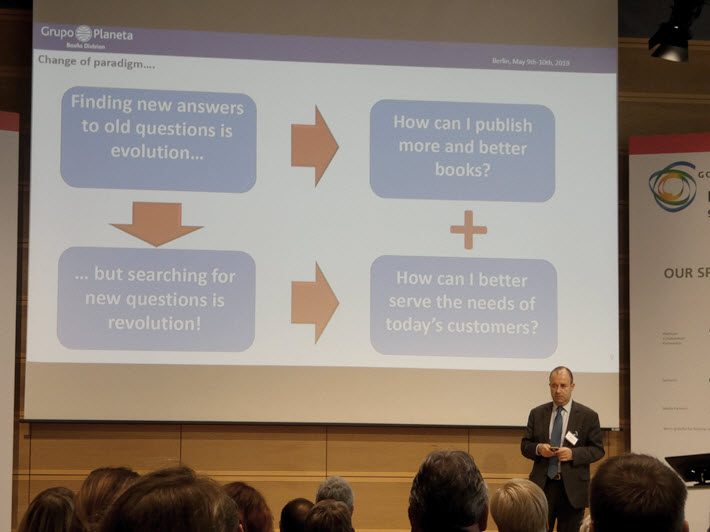 What’s interesting today in the opening keynotes, from two quite disparate world industry leaders, is that content diversity is probably holding an edge. From Planeta CEO Jesús Badenes del Río, we heard that navigating the fierce economic crisis that hit the nation in 2010 has, for publishers, meant learning to play the consumer where he or she lives, if you will.

Spain, he said, has come through the worst of the financial crisis with some 82 percent of sales still made in the bookstore setting, something of a victory considering the pressure. But the key has been becoming better at learning what the consumer actually wanted and delivering. 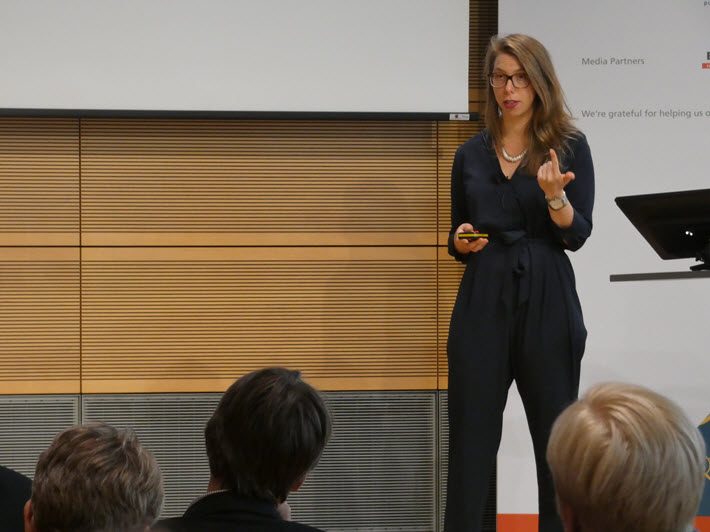 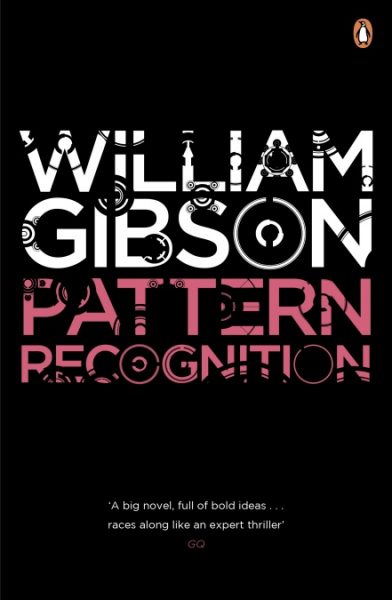 And a distinct parallel quickly developed as Random House for Young Readers’ Sara Sargent told the audience in her own keynote that her rarified position is that of a trend spotter (or “trend detector,” as Jesús Badenes later suggested), working not unlike the character Cayce Pollard in William Gibson’s Pattern Recognition, a commercial consultant who can read trends and social evolution for commercial clients.

One of the first of the major houses’ executives to understand how to utilize the actionable content Wattpad is surfacing on its platform, Sargent explained the approach she uses to develop on-trend content for a socially agile demographic. Some of her key points included that a publisher must learn to vet influencers carefully and to get to market with a book much faster than the norm—even to explain to a film star or YouTuber involved that book publishing is going to seem much slower he or she may be used to.

The sell to publishing house may be tricky, Sargent said, because trend-spotting and rapid content development isn’t the normal path to publication, but the success comes from “being really plugged in” and making sure that you stay closely engaged with the social and cultural movements of consumer.

One channel to explore: younger staffers. “If you have an intern or an assistant and you’re looking for books that speak to them,” Sargent said, “talk to them because they’re going to have an idea” and can be cultivated as your allies in-house in scanning for trend-clues. 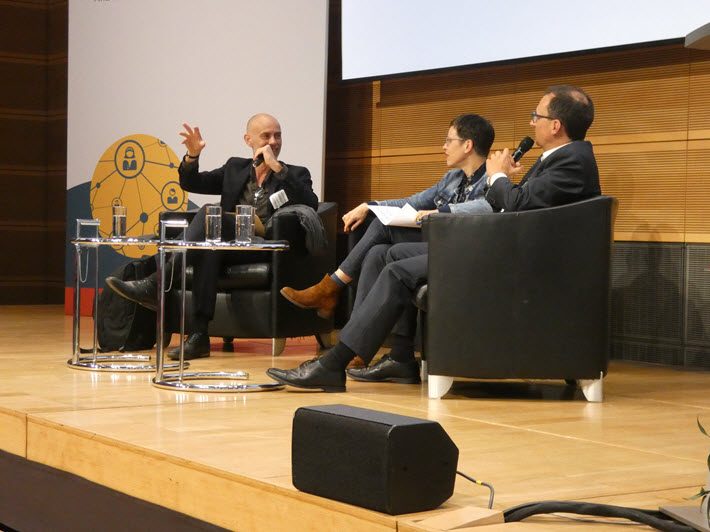 From left, Europa Editions’ Michael Reynolds, Frankfurter Buchmesse’s Katja Böhne, and Gyldendal’s Morten Hesseldahl on May 9 at Publishers’ Forum in Berlin talk about the commercial and storytelling tension between books, television, and film. Image: Porter Anderson

As Gyldendal’s Morten Hesseldahl (formerly with the Danish Broadcasting Network), said to Frankfurter Buchmesse marketing and communications chief Katja Böhne, “Sometimes people in the book business think that nothing needs to change. So many people hire only from inside the business,” so the outside influences don’t have a chance to guide and impact the industry as they should.

“We need to speak about what kind of culture we want to preserve, you need to address the culture, come up with a direction, make a new structure for decision making, being able to call in new ideas, to clarify who is deciding things in the house, even traffic managing. Everybody thinks they can do it without having skills—like a cook.”

A central message for Europa Editions’ Michael Reynolds, he said, is how the industry handles its authors in an era when so much opportunity in so many media and formats collide with so many powerful distribution forces.

He referenced the deeply acrimonious labor strife in the United States between artists of the Writers Guild of America and their agents who frequently engage in packaging for production studios.

“Writers can just be gobbled up” in a business being affected by such a formidable array of visual storytelling on screens and from the streamers amid “peak TV” and the questions now developing around just how good, or not, this all may be for writers.

“I try to remember every day,” Reynolds said, “that I’m here as a publisher for the writer. We need to keep this in the fronts of our minds.”

The programming continues today and Friday (May 10) at Berlin’s DBB Forum.