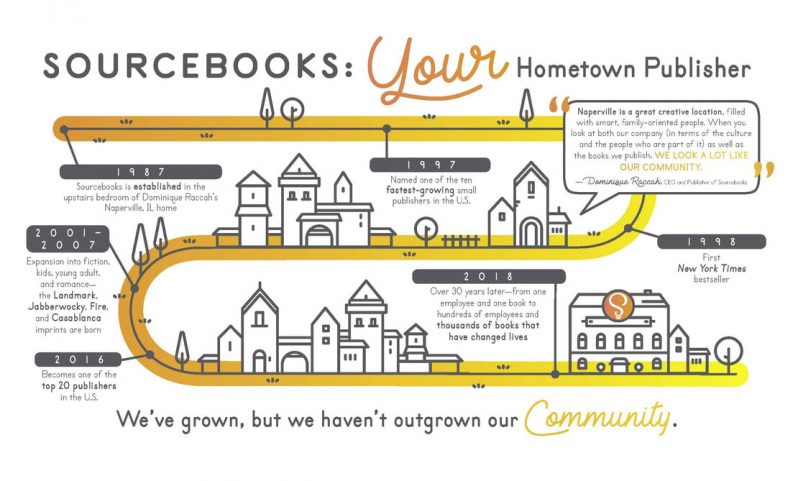 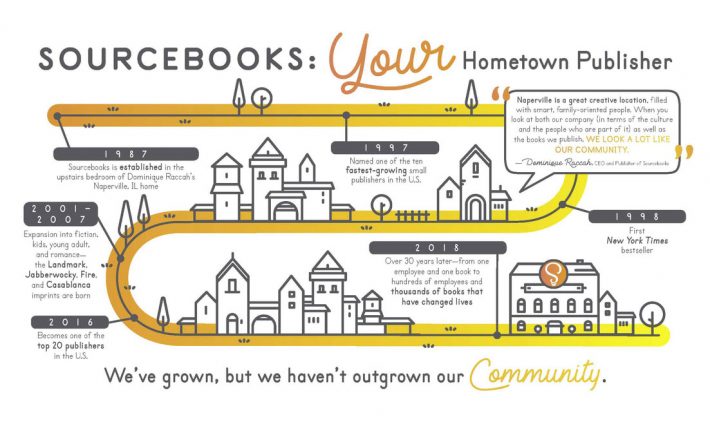 A Sourcebooks timeline graphic from its site stresses the publisher’s independence and hometown ethos. Image: Sourcebooks.com

The news is being described in press material as leaving Sourcebooks with “no changes in its leadership, management, publishing autonomy, or entrepreneurial culture.”

Sourcebooks retains 55 percent of its ownership, with Penguin Random House (PRH) taking a 45-percent stake, and—typical of the innovative ways Raccah has been known for developing her company—media messaging is referring to the deal as a “collaborative partnership.”

“Through its shareholding with Penguin Random House,” the initial statement from the companies reads, “Sourcebooks will be able to tap into resources and capabilities that will allow an even broader and deeper approach to domestic and global markets.  And the companies expect to work together on any number of new, shared programs aimed at reaching readers and supporting authors.”

A five-seat governing board handling the new arrangement is to include, according to reporting from Michael Cader at Publishers Lunch, Raccah, McIntosh, Raccah’s husband Ray Bennett, Sourcebooks’ senior vice-president Barbara Briel, and Nina von Moltke at PRH.

In a comment to Publishers Weekly‘s Jim Milliot, McIntosh has said that Penguin Random House has no plan to take a majority stake in Sourcebooks. “Sourcebooks does fantastic stuff,” she’s quoted saying. “We want to help them get bigger, and we think we can learn from each other.”

McIntosh is using “Let Sourcebooks be Sourcebooks” as the approach she says she expects to have in the partnership, and Raccah is reflecting that in saying that her company will keep its office locations intact, in Naperville, Illnois, New York City, Connecticut, and Arizona.

The result of the news of the partnership creates an interesting inflection point for Sourcebooks, which has emphasized its independence as a driving dynamic of its success. What it becomes now is something different, an independent almost half-owned by the very biggest force in corporate publishing—albeit with insistent statements from both sides that nothing in the Sourcebooks DNA is changing, perhaps most particularly what the company calls its “independent vision.” 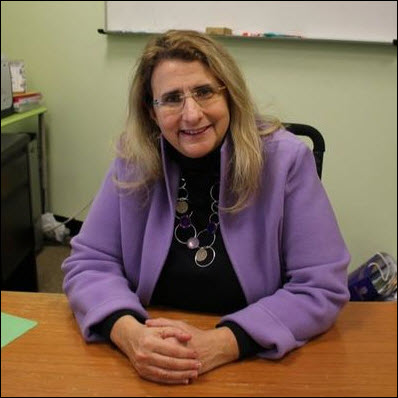 In a discussion on its site of its background, the publisher writes that Sourcebooks’ “independent vision” is primary. “For us, it means a passion for books and a dedication to the belief that books change lives. It means innovative publishing, where every book is personal and every author’s voice has a place. And it means not being afraid to say ‘I don’t know’ and forging a new path when we have to. We are a group of passionate, energetic and enthusiastic book lovers, and we are committed to helping readers experience each book.”

Founded in Naperville in 1987, the house now produces some 400 titles annually, and children’s books have continued to dominate its output.

If there was a definable turning point for many in the media who cover the company, it might have been the surprising traction that Raccah was able to achieve with her line of personalized kids’ books, the imprint called Put Me in the Story. Now operating as a major division with its own site and presence, the development of the line has been fueled by the company’s ability to attract major-brand licensing deals including Marvel’s The Avengers and Spider-Man, Disney and its Mickey Mouse brand, Sesame Street and more.

For several years, a call from Raccah was usually led by a triumphant, “We just got National Geographic!” or “We just got Curious George!” or “The newest one is Pete the Cat!” 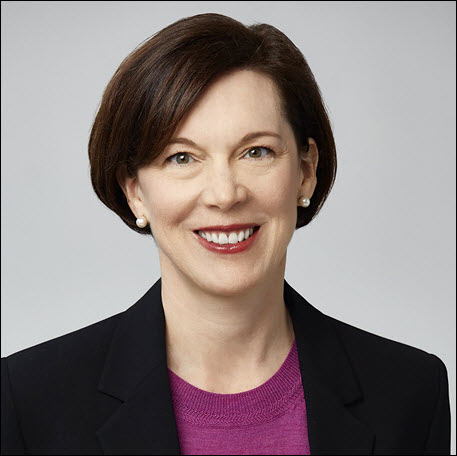 Of interest to Publishing Perspectives readers will be the messaging this week of how Raccah wants to do more international work with the company, and that that’s part of what the Penguin Random House partnership will enable. Cader quotes McIntosh saying that the Sourcebooks investment “means that we will participate financially in their performance and, over time, will be able to provide support for continued growth into new channels, markets, and ventures.”

This is being echoed in Milliot’s write, which says, “One area where the companies will have conversations is awareness of Sourcebooks’ brand on a global level, and how PRH can best help to expand it. McIntosh added that over time, PRH will support Sourcebooks’ continued growth into new channels, markets, and ventures.”

While Frankfurter Buchmesse trade visitors long have been familiar with Raccah and Sourcebooks, certainly, the company has remained—in international trade eyes—a remarkably resilient and impressive independent publisher but one very much rooted in American soil and industry and not, at least as a defining characteristic, a company with a strong international priority.

Many would welcome a more aggressive offshore stance from this company, particularly as it moves in children’s work for more than half its operation. Perhaps the time is right, in Raccah’s estimation, for that to change, and certainly, PRH is unmatched as the Big Five leader with international channels waiting for her to leverage.

Sourcebooks’ array of imprints may surprise some who haven’t followed the company’s developments into various readership communities and interests. Some of them are:

And in its self-descriptive literature, Sourcebooks, after 32 years, characterizes itself as “still publishing innovative mixed-media titles, now in thrilling new digital formats, as well as bestselling titles in historical fiction, college guides, study aids, baby names, parenting, romance, business, and children’s books.” Clearly, diversification has been a hallmark of Raccah’s progress, and in comments overnight, she has referred to Penguin Random House as being guided by a similar impetus.

Deloitte advised Sourcebooks on the finances of the partnership, the numbers of which aren’t being made public.

In the day’s media messaging, McIntosh is quoted, saying, “Sourcebooks is an amazing success story with an extraordinarily strong track record of building sustainable growth, and Dominique is a great publisher and entrepreneur whom I have long admired.  We now have a singular opportunity to forge a partnership of shared vision and values, and together grow our businesses, as we shape readers’ lives through the books we publish.”

For her part, Raccah—ever a fan of exclamation points—says, “Penguin Random House has a long history of fostering publishing entrepreneurs, and we’re excited to be joining that tradition. Our new colleagues are brilliant publishers, doing extraordinary work.  We are very excited to be working with them.

“Sourcebooks has developed a new model in the book space that is agile, data-centric, and customer-centric, and we do it all from America’s heartland.  This partnership is a continuation of our new model and another example of PRH’s remarkable, diversified approach to the market.

“We’re very excited to develop this new approach to creating the future together!”

It can be expected that McIntosh and Raccah’s news will dominate the BookExpo session next week on May 30 titled “The Power of Retail: Making Books, Authors, and Building Community,” at noon (1E16) with ReaderLink’s Dennis Abboud, Barnes & Noble’s Tim Mantel, and the American Booksellers Association’s Oren Teicher. NPR’s Lynn Neary moderates.

More from Publishing Perspectives on Penguin Random House is here, and more from us on Sourcebooks is here.