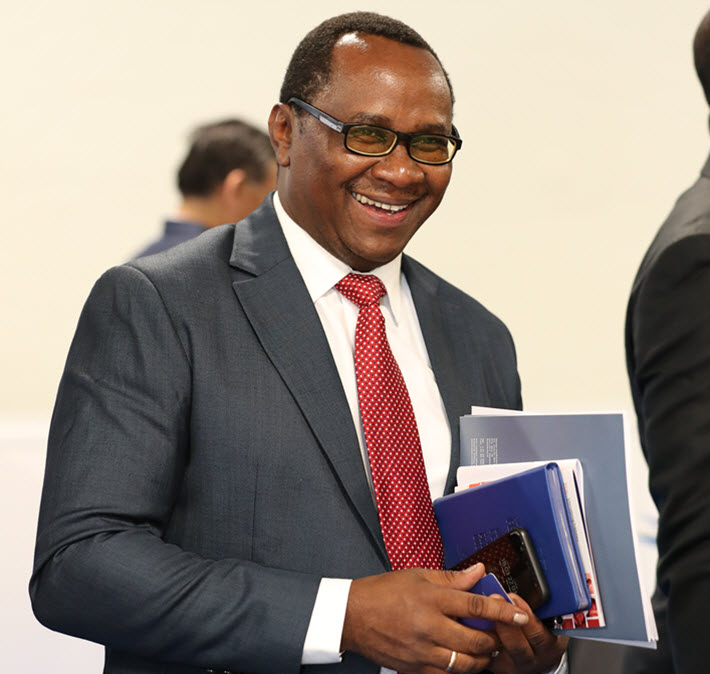 Njagi will join International Publishers Association (IPA) president Hugo Setzer onstage on June 14 to open the conference. And while this second event in the IPA Africa Seminar program will be attended by as many as 600 publishing professionals from all over the continent, the Nairobi venue this year means that many issues and perspectives will be guided by the expertise and purview of Njagi’s association.

An experienced lobbyist for Kenyan publishing, Njagi’s work has contributed to the growth of the Nairobi International Book Fair, now a self-sustaining event in East and Central Africa. He sits on educational boards both in government and private-sectors programs, and is leading the formation of the Publishers Association of East Africa, which is being designed to coordinate the various national associations of the region for a united front on book publishing issues.

He is the treasurer of the African Publishers Network; director of the Kenyan reproduction rights organization (RRO) Kopiken; and directs the National Book Development Council of Kenya.

In looking to Njagi for his executive viewpoint on concerns in African publishing, we begin by asking him to name several top-line challenges for him and his colleagues. He names four: inconsistent government policies, VAT on books, competition from non-governmental organizations, and copyright infringement and piracy.

Lawrence Njagi: First, a lack of consistent book policies that govern how books and instructional materials are developed and procured.

In a lot of African countries, textbooks form about 90 percent of all books procured by government. Governments also form about 80 percent of the market. This makes it very critical to have book policies that successive governments use in administration of books and learning materials. Every new government shouldn’t come with its own policy which could or may be politically motivated, but rather should use a documented and signed policy that has been agreed upon by key stakeholders.

“Taxing information is like shooting yourself in the foot: it limits the spread of knowledge and ensures that the poor get only poorer.”Lawrence Njagi

The second problem is with government taxation of books. Taxing information is like shooting yourself in the foot: it limits the spread of knowledge and ensures that the poor get only poorer. A lot of African countries are now levying Value Added Tax (VAT) on books.

Third, there are quite a number of non-governmental organizations (NGOs) that are now taking on the role of publisher, and offering various governments books at highly subsidized prices. These NGOs don’t take into account the initial production costs of book production, and also don’t offer solutions when they abandon a program, moving on to other fields. This brings into question the issue of sustainability, and most governments are exposed—not least because they frequently will have killed the local publishing industry.

And fourth is piracy and copyright theft. With digital advancements, it has become quite easy to pirate books, especially popular textbooks, and get them onto a market at very reduced prices. This of course denies revenue to both the author and the publisher.

Publishing Perspectives:How far do you feel the African industry has come so far in starting to address some of these issues?

LN: Some countries like Kenya now have a fully developed comprehensive “instructional materials policy,” and I believe this will very much help sanitize the issue of book development and provision. I’m aware that APNET has prioritized this, and I believe a lot of other African countries will follow suit.

On taxation, we’ve engaged our governments to try to get VAT removed from books. This is work in progress.

As for the NGOs, we’ve insisted that they look at the long-term effects of their activities. We think it’s possible to achieve these NGOs’ goals while promoting local publishing industries. It can be a win-win situation.

And as for piracy, we’re working closely with government anti-counterfeit boards and copyright boards to detect and prosecute offenders. Marketing campaigns have also been created in a few countries.

“A lot of Africans, unfortunately, read only to pass examinations. This can only be reversed if we make available and promote more trade and general books.”Lawrence Njagi

PP: Is it possible to say that educational publishing at this point needs more help and support than trade-book publishing, or do both major sectors face serious challenges of their own?

LN: Both need serious support. Educational publishing, being the mainstay of most African publishers, requires support with relevant legislation to ensure that it thrives.

Trade publishing require urgent promotion to ensure that Africans read for genuine acquisition of knowledge, for entertainment, and for keeping abreast of world happenings. A lot of Africans, unfortunately, read only to pass examinations. This can only be reversed if we make available and promote more trade and general books.

PP: Can you give us an impression of how you see the action plan started in the first IPA Africa Seminar in Lagos last year? Are you pleased with where that work is going?

LN: The Lagos Action plan is a major departure from the kind of workshops and seminars that have been held on African soil in the past. A lot of times, those workshops yield very little in terms of tangible pro-active actions that remedy problems. A lot of times, such events end up as “talk shops” with very little workable solutions.

The Lagos Action Plan, which was as a result of the IPA Lagos seminar, is a clear departure from this. Follow-up meetings have been held and I’m happy that concrete actions taken will be presented at the Nairobi seminar, so stay tuned.

“If we can provide an environment conducive to the promotion of publishing and the protection of the industry from adverse policies, we’ll all have a bright future.”Lawrence Njagi

PP: In terms of readership—especially among young people—what are the most daunting challenges the industry faces today?

LN: I’ll give you four hurdles we face in this regard:

PP: Lastly, if one major thing comes out of the seminar in June—one big change or development or agreement or new plan–what would you like it to be?

LN: If we can provide an environment conducive to the promotion of publishing and the protection of the industry from adverse policies, we’ll all have a bright future, one that we can confidently bequeath to our children and therefore ensure the security of publishing, literature, and reading for generations to come.

More from Publishing Perspectives on the International Publishers Association is here and on African publishing markets and issues is here. Our articles that relate specifically to this IPA Africa Seminar are here.

And ‘Beyond the Book,’ Christopher Kenneally’s podcast from one of the seminar’s sponsors, Copyright Clearance Center, spoke with Lawrence Njagi. You can hear their conversation here.