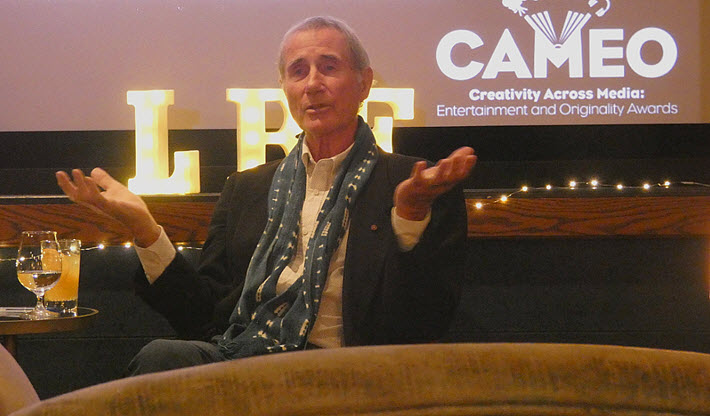 The first outing in the States of London Book Fair’s CAMEO Awards for book adaptation brought some essential internationalism to the shrinking BookExpo 2019. 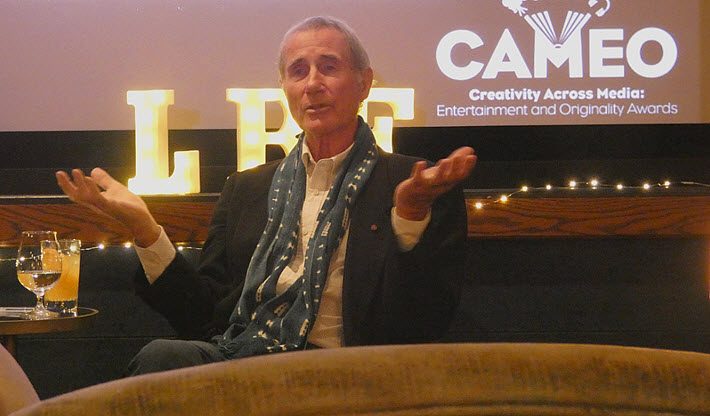 Creativity Across Media: Entertainment and Originality

What stood out as a rich moment in the stripped down reality of BookExpo 2019 came courtesy of another Reed Exhibitions program at the first presentation of the UK’s CAMEO Awards in New York.

The London Book Fair, which produces the awards in the UK in association with the Publishers Association, is staged by Reed, as is BookExpo in the States under the ReedPop division.

And yet there’s almost no comparison between the broad-based, author-honoring, issue-driven show directed by Jacks Thomas in London and the sadly shrinking trade show at the Javits Center in New York City this week, helmed by a kind of rotating executive suite since Steve Rosato left the directorial post for OverDrive.

BookExpo, Michael Cader has reported at Publishers Lunch, reportedly has resorted this year to “flat out paying 200 booksellers to attend, providing US$1,000 for travel expenses under the Booksellers Grant program”—after wooing booksellers to last year’s “reimagined” show, only to draw fewer booksellers than before.

And yet, while the 2019 show certainly looks smarter with a logo/branding makeover and its associated sleek colors, the aisles at the Javits are again airport-concourse width, rarely busied up with heavy foot traffic as the number of exhibitors seems to continue to dwindle. This seems to be a trade show adrift.

‘Audiobooks Are Our Hottest Format’ 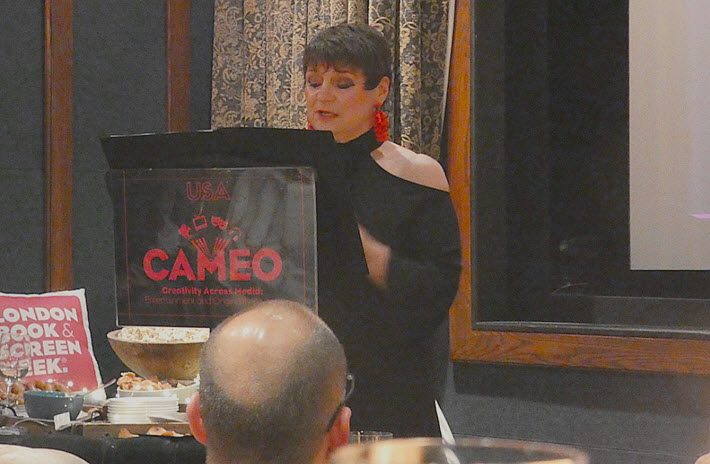 Much of this came home last evening (March 30), when Thomas was joined by London Book Fair’s Orna O’Brien and Helen Clifford and their faithful support team from Midas PR in installing the first US edition of their CAMEO Awards.

At once, the comparative energy these Brits brought with them was stable, upbeat, and right on mission: they were there to honor American producers of audiobooks based on properties established by UK publishers.

In the international arena, the globalization of the world’s publishing industry and its keenly diverse markets is the animating force. You parlay your best work into a far-reaching dialogue of literature and intelligence.

And just as the industry is working to translate its output across borders, it’s doing the same across entertainment media.

Publishing Perspectives readers know that the UK’s Publishers Association has been hard at work producing just this sort of industry-supportive data, as part of its effort in the creative industries and their common-cause efforts in the face of Brexit’s uncertainties.

The CAMEO Awards—for “Creativity Across Media: Entertainment and Originality:—are a program unmatched by the US show. They’re part of the London Book Fair’s public-facing London Book and Screen Week, which celebrates adaptations of books to film, to television, to games, and to audio, and they engage the book-friendly population in the British capital in a week of film showings and other events around London during its book fair. The concept helps the book buyer, the filmgoer, the TV viewer, and the gamer understand more about the connections that can exist between the creative industries.

At Thursday’s event, held in the fourth-floor screening room at Soho House, treated its invited audience to an entertaining round of commentary by the acclaimed Oscar-nominated actor and major audiobook narrator Jim Dale—whom New Yorkers still recall as Scapino from the 1974 Circle in the Square evocation of Moliere , which would go on to trigger nationwide regional theater productions of the show for many years and put Dale on the map for American theatergoers.

Dale told his audience that despite having voiced more than 40 audiobooks, including his multi-character work in the Harry Potter recordings, he doesn’t listen to his narrations. Early on in his voicing career, he was called back to a studio to make corrections and heard himself on tape, didn’t like the sound of it, and has never listened again. 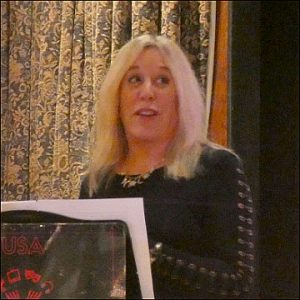 Lisa Sharkey, as the evening’s emcee, interviewed Dale. She directs HarperCollins’ creative development and has a background not only with Penguin Random House but also with ABC News’ Good Morning America and Al Roker Productions. As she went into her interview, she told the CAMEOs audience, “Audiobooks are our hottest format, and I’d never sign a book if I didn’t get the audio rights.”

Actor and author James Murray was also on-hand. He has participated in the narration of The Brink, his novel with Darren Wearmouth, scheduled for a release (with the book) on June 18 from Harper Audio. Murray told us he’s shopping the book now for a screen adaptation.

As you may remember from our preview, this first year of the CAMEO Awards USA has focused only on audiobooks and saw three in contention:

And the winner is the audiobook of Burns’ Milkman in its alto-nuanced narration by Brid Brennan and published by LLC Dreamscape Media. Publisher Tammy Faxel and audio acquirer Mike Olah were there to accept the honor. 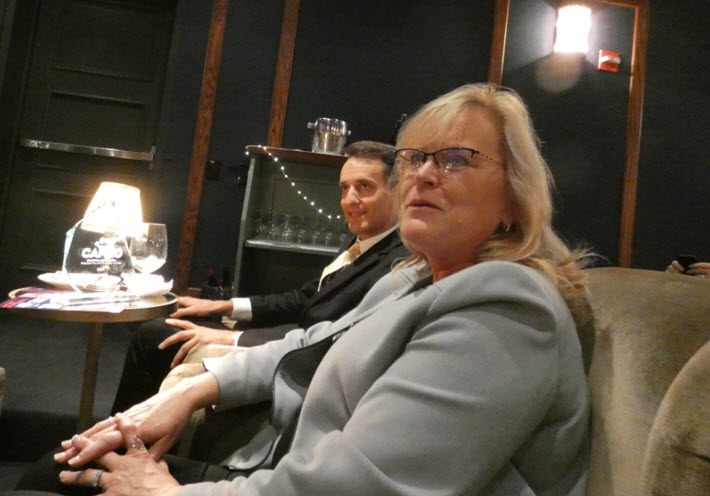 As London Book Fair makes this interesting move—it will expand its CAMEOs USA next year to more of its book-adaptation formats than audiobooks—we see more clearly than before how much internationalism has faded as an element of BookExpo. 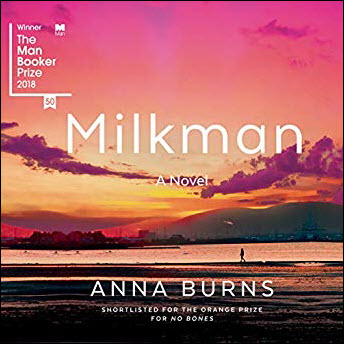 London has a major international guest of honor program, as does the Frankfurter Buchmesse.

At London, it’s called Market Focus, and the designated nation this year was Indonesia. In 2020, the powerhouse of the Arab world’s publishing industry, the emirate Sharjah, has been announced the London Market Focus. (See our story today about Sharjah Book Authority’s new agreement with Ingram’s Lightning Source for a print-on-demand facility at Publishing City.)

At Frankfurt, this year, October 16 to 20, the designated world market highlighted will be Guest of Honor Norway.

And at BookExpo? There is no guest of honor, no market focus, precious little international play at all.

This wasn’t always the case. Not so many years ago, in 2015, a large pavilion from China was the first thing trade visitors to BookExpo encountered on the show floor at the Javits, tall saplings swaying in the breezes of a white-on-white structure. That Global Market Focus event was managed for the show by Vienna-based consultant Rudiger Wischenbart, who most recently, of course, directed this year’s Publishers’ Forum in Berlin for Klopotek.

Today as the show closes (May 31), have a look at those rights-center tables where the international rights are supposed to be being bought and sold all day. So far this week, they’ve never looked even modestly busy when we’ve had a chance to look in on them.

This, at the worst of all moments in American politics to stage an event without the strong international character that’s fundamental to the publishing industry and its importance in the world’s business and cultural development. Ironically, our biggest houses and some small ones, too, are working up their offshore presence, with Judith Curr’s translation-wise HarperVia pouring Prosecco at its stand and Dominique Raccah and Madeline McIntosh introducing their new “collaborative partnership” for Sourcebooks and Penguin Random House, one key element of which is international potential.

There have been instances this week when translation came to the fore in BookExpo programming, yes. But as Bilbao/Madrid-based consultant Javier Celaya noted on Thursday in the “Covering Publishing” panel put together by Copyright Clearance Center’s Christopher Kenneally, there isn’t even a sizable Spanish-language presence on the BookExpo show floor, with Spanish-speaking America second only to the English-language population.

The healthy trade show we saw again this year in London hasn’t lost sight of this and is here this week doing its job: signaling to the Newer World with a first, jewel-like staging of its CAMEO Awards USA that even in the shadows of Brexitian bigotry, this is an industry reaching out with its best work to trade with other worthy markets.

No wonder that 60 percent or more of the UK’s publishing revenues lie in export, a cultivation of the outreach that BookExpo seems no longer to reflect.

At BookExpo on Thursday, as on Wednesday, the rights-trading floor, which should be the commerce-busy heart of a healthy trade show, was almost empty. It was good to have it back at the Javits. But once again, the New York Rights Fair, as the trading area has been rebranded by Publishers Weekly and BolognaFiere, had what appeared to be very few discussions going on at its agents’ tables.

We can only hope that in future iterations of BookExpo, Reed’s good folks on the American side of the company might meet and talk with their British colleagues about “what works,” as the London fair calls one of its many conferences—what works not only on a contemporary publishing exhibition floor in general but what also works on the international scene that’s the real frontier(s) of publishing’s future. 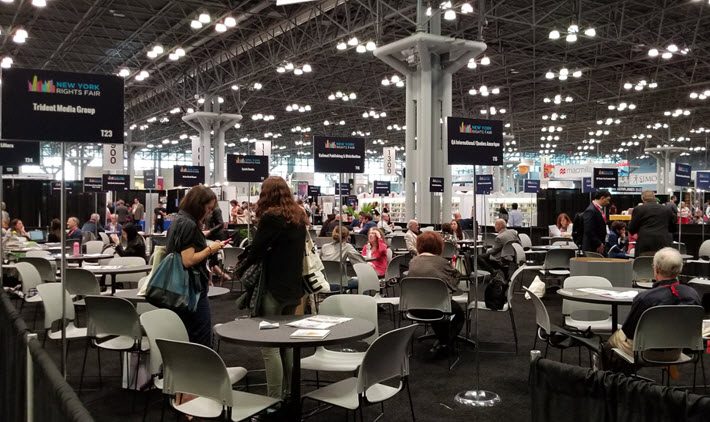 On Thursday afternoon (May 30) at BookExpo 2019, the rights-trading center, branded New York Rights Fair, again had most of its chairs and tables empty. Image: Porter Anderson