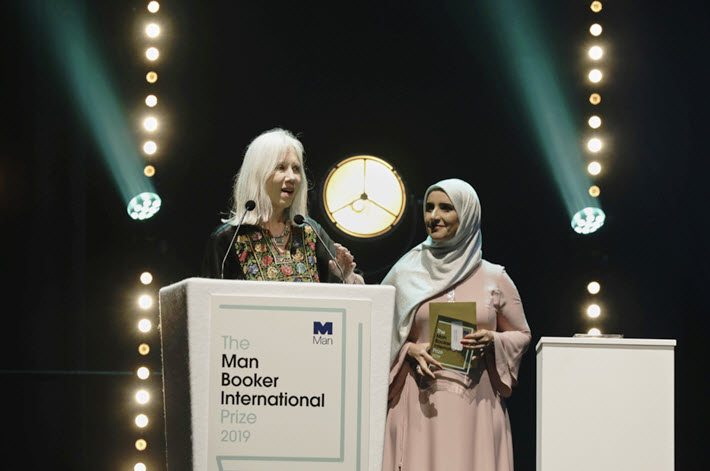 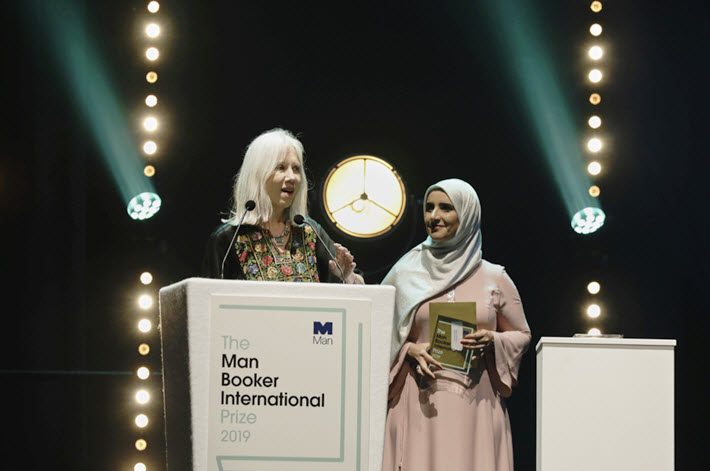 Booth: ‘An Allegory of Oman’s Coming-of-Age’

Becoming the first Arabic author to win the Man Booker International Prize—and the first Omani woman to have a novel translated into English—Jokha Alharthi has become, with translator Marilyn Booth, the winner of the 2019 honor at the program’s ceremony tonight (May 21) at London’s Roundhouse.

Keep in mind that this is not the Booker Prize for Fiction. The Man Booker International Prize is a younger award established in 2005 to honor an author and translator equally for a work of fiction translated into English. This is its last edition with the Man Group’s 18-year sponsorship of the Booker Foundation’s work, an extension of which made the original development of this prize possible. 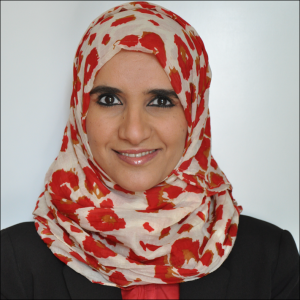 Jokha Alharthi is a native and resident of Oman and is the author of two collections of short fiction, a children’s book, and three novels in Arabic.

Fluent in English, she holds a PhD in classical Arabic poetry from Edinburgh, and teaches at Sultan Qaboos University in Muscat. She has been shortlisted for the Sheikh Zayed Book Award in the young writers’ category, and her short stories have been published in English, German, Italian, Korean, and Serbian. She lives in Oman. 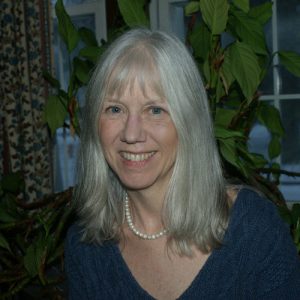 Marilyn Booth is an American, a native of Boston. She holds the Khalid bin Abdallah Al Saud Chair for the Study of the Contemporary Arab World, at the Oriental Institute and Magdalen College in Oxford.

In addition to her academic publications, she has translated many works of fiction from Arabic, most recently, The Penguin’s Song and No Road to Paradise, both of which are by Lebanese novelist Hassan Daoud. She is based today in Oxford.

In her very helpful introduction to the Sandstone edition, Booth writes that this novel, Alharthi’s second, traces three generations of an Omani family during the “rapid social changes and consequent shifts in outlook that Oman’s populace has experienced across the 20th century and in particular since Oman’s emergence as an oil-rich nation in the 1960s.”

Booth points out that there is a “wave of historical novels” forming “a major subgenre of fiction in the Arab world” today, and that Alharthi’s work—in its original translated to Ladies of the Moon—is very much a part of that wave. She calls Celestial Bodies “an allegory of Oman’s coming-of-age” and points out that it has been praised “by critics across the Arab  world for its fineness of portraiture, its historical depth and subtlety, and its innovative literary structure.” 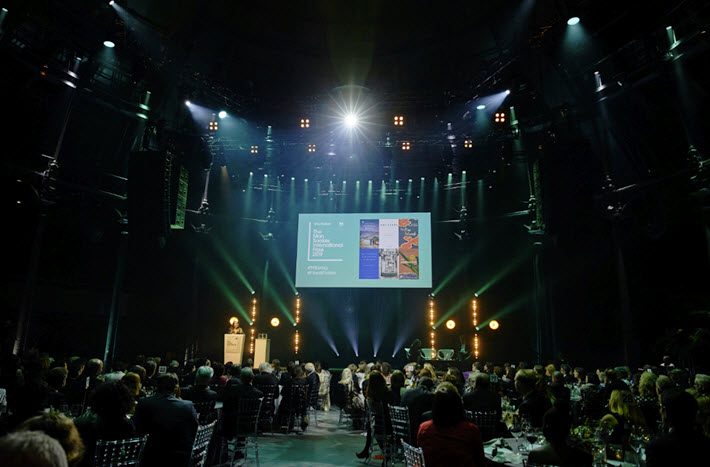 At the Roundhouse in London. Image: Man Booker International Prize

In an interview with Publishing Perspectives from London immediately after the award ceremony tonight, Alharthi has told us that all three of her novels “do have to do with historical interpretations, if you will, of the Omani experience, as this one does. But they’re mostly through different perspectives, and this one has more social aspects in it.”

“One of many rich things about Jokha’s work–which also made it very hard at times to translate–is that she brings a pre-modern poetic heritage into the novel.”Marilyn Booth

At the university in Muscat, Alharthi says, she finds that while some young Omanis are interested in her field of classical literature, a great many are being drawn to science and medicine, “and the humanities in general aren’t so popular for study in modern Oman.

For her part, Booth, who has been based at Oxford since 2015, says, “One of many rich things about Jokha’s work—which also made it very hard at times to translate—is that there’s quite a lot of poetry in the novel. She brings a pre-modern poetic heritage into the novel.

“But I have to say that as a translator, every time I got to another poem, I’d think, ‘Oh, Jokha, don’t do this to me again.'”

The laughter between these two women is contagious as they speak about their respective experiences of the work, both of them with high praise for the translation’s publisher, the independent house Sandstone Press in Dingwall, Scotland, northwest of Inverness. This has been an interesting shortlist, as a matter of fact, with Fitzcarraldo Editions having two titles, Profile’s Serpent’s Tail one, Quercus’ MacLehose Press another, and the last title produced by And Other Stories.

Noting the important work that independent presses are doing to promote translated work in the industry today, Booth speaks of how bringing Alharthi’s work into English gives non-Arabic readers a chance to appreciate how much of her prose is infused with poetry. “The women’s talk,” she says, “is filled with proverbs—it’s not in anything like the high tradition, but is very poetic in its own way.”

“I grew up in a literary environment. Many of my family members were poets. So I started writing from a very young age.”Jokha Alharthi

And Alharthi compliments Booth on her provision of her introduction for Sandstone’s edition. Following a graphical rendering of the characters’ family tree, the introduction explains how the book is narrated by an omniscient voice as well as by one character who is one of the women’s husbands. Wealth tied to traditions of slavery and a society’s “notion of ideal womanhood” in an era of upheaval, she writes, have a lot to do with how Alharthi reflects in her story “the difficult transitions of societies faced with new opportunities and pressures” as many cultures of the Arab world are encountering today.

“But I have to say,” Booth points out, “that not all publishers want introductions,” despite the fact that in translated work these perspective pieces can give the reader exactly the context necessary to fully appreciate a work.

Alharthi says that she’s now working on the early stages of a fourth novel, and Booth tells us that she hopes to have the chance to translate Alharthi’s third novel.

The author tells us that her authorial voice comes naturally to her now, thanks to a background that prepared her well for her career.

“I grew up in a literary environment,” she says. “Many of my family members were poets. So I started writing from a very young age. And I’ve been publishing now since just before I turned 19.”

Jurors’ Praise: Style as ‘a Metaphor for the Subject’ 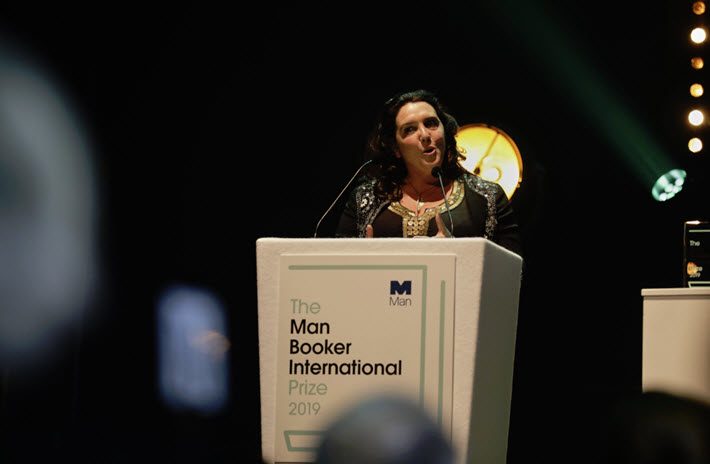 The historian, author, and broadcaster Bettany Hughes has chaired the jury this year and announced the award this evening, calling Celestial Bodies “a book to win over the head and the heart in equal measure, worth lingering over.

“Interweaving voices and timelines are beautifully served by the pacing of the novel,” Hughes said. “Its delicate artistry draws us into a richly imagined community—opening out to tackle profound questions of time and mortality and disturbing aspects of our shared history. The style is a metaphor for the subject, subtly resisting clichés of race, slavery and gender.

“The translation is precise and lyrical, weaving in the cadences of both poetry and everyday speech. Celestial Bodies evokes the forces that constrain us and those that set us free.”

Speaking for the Man Group, its CEO, Luke Ellis, said, “‘On behalf of Man Group, I would like to congratulate Jokha Alharthi and Marilyn Booth, as well as each of the shortlisted authors and translators.

“As one of the first literary awards to celebrate the work of international authors and, in recent years, to celebrate fiction in translation, the Man Booker International Prize plays an invaluable role in encouraging a diversity of voice in fiction worldwide.

“Diversity will remain an important area of focus for Man Group as we concentrate more of our resources on our ‘Paving the Way’ campaign, which aims to enhance diversity and inclusion at the firm and across the investment industry, as well as continuing to support charitable initiatives that promote literacy and numeracy.”

As Publishing Perspectives readers will recall, the program’s sponsorship next moves as of June 1 to the United States and California’s Crankstart charitable fund from benefactors Michael Moritz and Harriet Heyman.

‘The Crossroads of a Complex Present’ 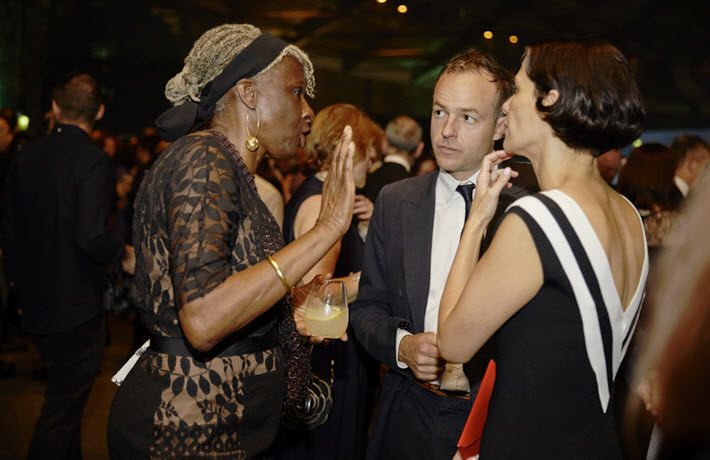 Alharthi’s Celestial Bodies is set in the fictional village of al-Awafi in Oman, and features three sisters: Mayya, who marries Abdallah after a heartbreak; Asma, who marries from a sense of duty; and Khawla, who rejects all offers while waiting for her beloved, who has emigrated to Canada.

As the publisher’s description of the content has it, “These three women and their families witness Oman evolve from a traditional, slave-owning society slowly redefining itself after the colonial era, to the crossroads of its complex present.”

If you’re in London, you can meet both Alharthi and Booth at an event at 7 p.m. on Thursday evening (May 23) at the flagship Waterstones in Piccadilly Circus. Ticketing for that event is here.

Additionally, the author and translator will be interviewed by Hughes at the Hay Festival in Wales on Saturday (May 25) at 11:30 a.m. Ticketing for that event is here.

As our readers know, the shortlist for the Man Booker International this year comprised five women authors and six women translators, the output of five publishers. 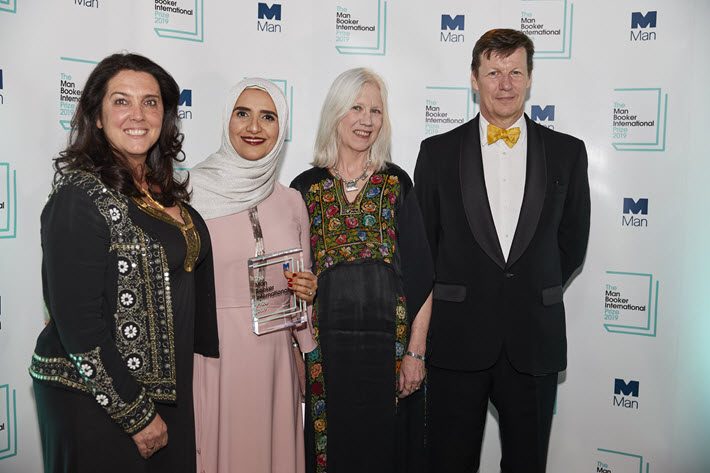 Here are the five titles shortlisted in contention with the winning Celestial Bodies:

Books under consideration for this prize cycle were published in English in translation by UK publishers between May 1, 2018, and April 30.