Building on a decade of experience in international ebook distribution, Bookwire expands into publishing software solutions with its new ‘Bookwire OS’ offering.

For a ‘Diverse Landscape of Business Models’

Known primarily for its ebook distribution work with a particularly long reach into the Latin American markets, the 10-year-old Bookwire is currently is introducing its “Bookwire OS” offering, a publishing software offering including operational, marketing, and production capabilities.

Jens Klingelhöfer, the founding CEO of the Frankfurt-based company, was in Berlin last week for Klopotek’s Publishers’ Forum and spoke there about how the company’s publishing clients—now numbering more than 1,500—are able to use the system as something akin to the operating system referred to by the new name.

Klingelhöfer stresses that Bookwire’s user interface has been completely overhauled with the help of specialists in cognitive load design and web development, to increase the program’s intuitive level of control.

And of key importance in rolling out the new suite of capabilities, he says, is the fact that the company now is doing so much more than the distribution tasks it’s known for.

“During the coming months,” he says, “we’ll be rolling out new intelligent functions for our publishing clients in all four areas—production, distribution, marketing, and analysis.”

The program now is intended to support and implement not only ebooks but also audiobooks and print-on-demand (POD) products. 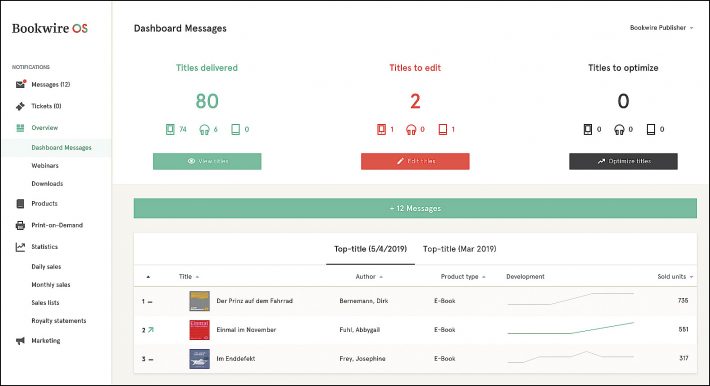 The new Bookwire OS dashboard tracks and implements a variety of new capabilities for the company’s clients, supporting the creation and distribution of audio products as well as distribution, ebooks, and print-on-demand. Image: Bookwire

In a series of remarks, he points out what the newly reconfigured Bookwire environment can do.

“The audiobook market,” Klingelhöfer says to Publishing Perspectives, “now is developing beyond the Audible-and-iTunes monopoly and into diverse and complex market with many new players,” one of which, of course, is Bookwire.

Audiobook target groups can be examined and accessed with what Klingelhöfer calls an “audiobook dashboard that shows,” he says, “audience data provided by Spotify, Apple Music and others.

“We consult with publishers,” he says, “regarding music streaming services, to help them to set up their playlist marketing strategies.” 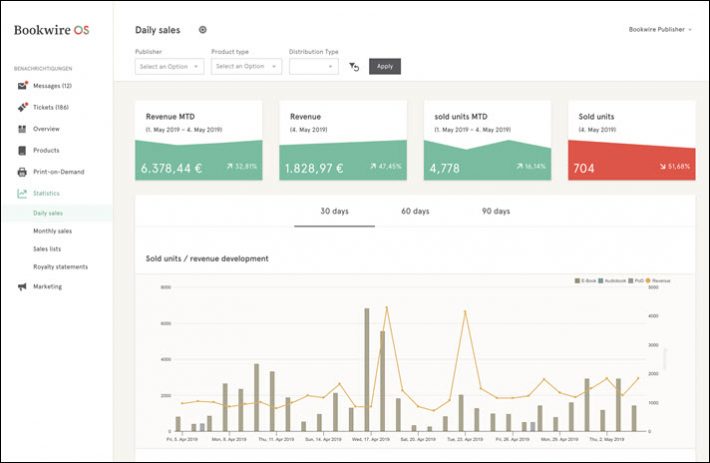 Publishing Perspectives readers may recall our story last month about Bookwire’s win of a Digital Publishing Award during the Leipzig Book Fair for its “WAY” program, the name standing for “We Audiobook You.”

As it turns out, this is part of the new offering, Klingelhöfer says, folding in production capabilities for clients that include producing audiobooks through a managed complete audio production process.

And, of course, the real selling point is likely to be what the Bookwire team says is full integration of these services. “All steps,” the company’s media messaging says, “from a request for a quotation for ebook or POD production to product delivery, are fully integrated into Bookwire OS for publishing clients.”

More on the new development is here, and Klingelhöfer will be at BookExpo later this month and can meet with trade visitors interested in knowing more about the new offering. 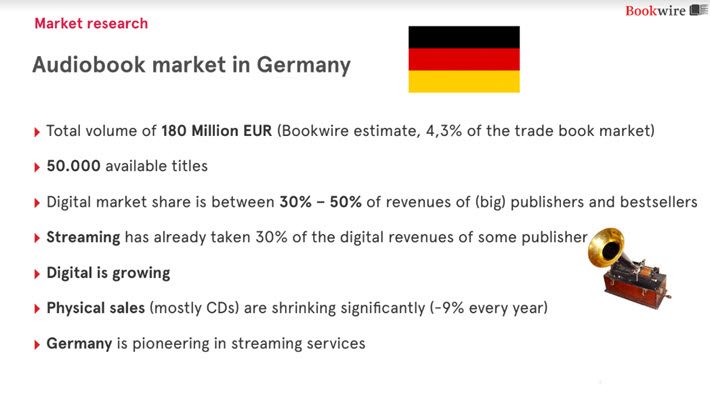 In this slide from his Publishers Forum presentation in Berlin, Jens Klingelhöfer shows the developmental presence of audio in the German market. Image: Bookwire

More from Publishing Perspectives on Bookwire is here.