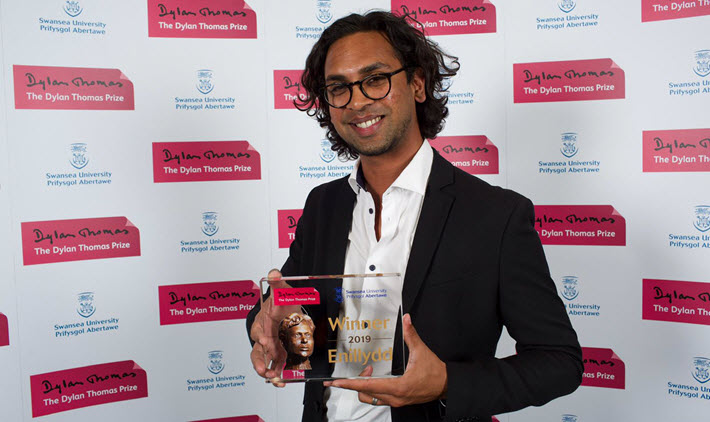 The acclaimed debut novelist Guy Gunaratne talks of his fellow-feeling for ‘aspiring writers, who are writing from a place similar to where I began.’ 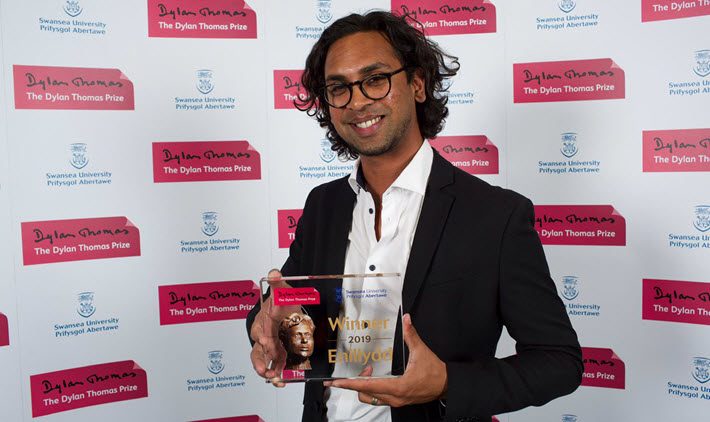 ‘To Make Art Out of the World’

The prize honors writers under 39 years of age—the age at which the program’s eponymous poet died—and awards a £30,000 purse to its winner (US$38,347). The prize can go to poetry, novels, short stories, and drama.

Tonight (May 16) in Swansea University’s Great Hall, the program has named Gunaratne its winner for his debut novel In Our Mad and Furious City (Headline’s Tinder Press, 2018). The book is a fictional tale set in 48 hours in a northwest London housing development after the murder of a British soldier, as told by three narrators. Not unlike Nikesh Shukla’s Run, Riot (Hodder, 2018)—which has won a CrimeFest 2019 honor, as we’ve reported, this week—Gunaratne is writing about young minority characters in an urban setting in crime-challenged situations.

On the news of his win, Gunaratne said, “Dylan Thomas has always meant a lot to me, he’s a writer I’ve always turned to for inspiration.

“And after winning this prize, my mind really just goes to all the other writers, or aspiring writers, who are writing from a place similar to where I began. A place like Neasden [in northwest London], somewhere I always thought was a nowhere place.

“But to make art out of the world, the language, the voices I grew up around I always felt was important. That’s all I tried to do with this book.” 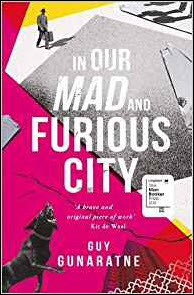 In a prepared statement, Swansea’s Dai Smith, who annually leads the Swansea jury, is quoted, saying, “Once in a while, a work of fiction appears which uses voice, style and story, as only works of the imagination can, to let us enter, to make us see, to demand we understand lives and circumstances seldom given that center stage position in our contemporary culture and society.

“This is what Guy Gunaratne’s stunning multi-voice debut novel In Our Mad and Furious City sets out to do and bravely achieves for marginal lives, young and old, in the unforgiving whirlpool of London today.”

In addition to Gunaratne’s book, the Dylan Thomas shortlist included:

Gunaratne’s book has had a strong reception, being longlisted for the 2018 Man Booker Prize for Fiction. It also was shortlisted for the Goldsmiths Prize and the Gordon Burn Prize.