Not yet three years in operation, the independent publisher éditions Goutte d’Or may have its biggest success yet in the offing, in its forthcoming release of Journal de L. on August 22, just in time for France’s literary season, rentrée littéraire.

The book is author Christophe Tison’s imagining of the diary of Nabokov’s Lolita—an apt example of the type work this still-young indendent publisher produces, and a reflection of a trend among several such houses.

Far from the upscale Parisian neighborhood of Saint-Germain-des-Prés in which French publishers traditionally have been located, Goutte d’Or (the name means “drop of gold”) takes its name from one of northern Paris’ most diverse districts, known for its waves of immigration from North and sub-Saharan Africa. The publisher’s logo pictures a steel bridge, the elevated No. 2 Métro line nearby.

Journalists Clara Tellier Savary and Geoffrey Le Guilcher, and novelist Johann Zarca, all in their 30s, launched the firm with “books about today,” says Savary. With narrative nonfiction as one of their interests and a fondness for thorough editing, they also share a clear concept about how to market their books.

“We want to be able to champion our books,” says Savary. “So many are published and quickly disappear. Writing and publishing a book is such a big investment, and we had plenty of ideas about promotion.”

Savary oversees the company, while Le Guilcher handles nonfiction and Zarca fiction. With an investment of €12,000 (US$13,419) and their own previous experience in writing, editing, and several media, they hired a graphic designer and found a printer. 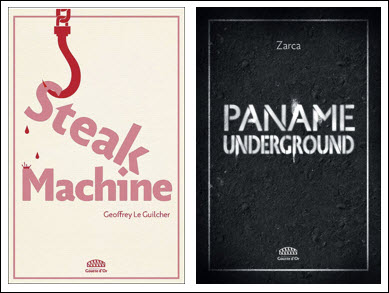 Le Guilcher and Zarca provided the company with its first two books. Le Guilcher, an investigative reporter for a variety of independent media sites, wrote Steak Machine, for which he went undercover in a slaughterhouse to investigate the French meat industry. The first print run sold out in a month. Zarca’s contribution, Paname Underground, a fictionalized account of underground Paris, won the 2017 Prix de Flore award, which is judged by journalists and recognizes younger writers.

One of the trio’s intentions is to work on only a few books a year, promising authors they’ll give their books maximum attention and exposure. Because of the company’s tiny size, “We don’t have much to lose, so we can experiment,” Savary says. “With my two partners, we have meetings in a [phone] text group. We can make quick decisions.”

They work closely on manuscripts with their authors. Depending on a book, they may build a marketing campaign around it which includes YouTube videos, posters and collages in the street, and working social media networks, which has attracted attention across the Channel. 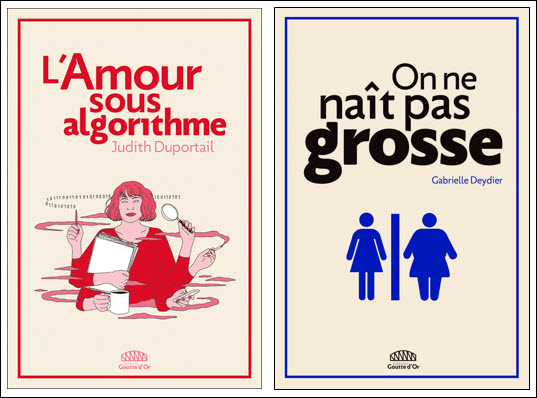 For Judith Duportail’s L’Amour sous algorithme (Love Under the Influence of an Algorithm) in which the author explores the dating app Tinder, they crafted a video trailer (below). This led to Adam Sage’s cover story with the author in The Times 2 despite the fact that there’s no English edition yet. Contra in Barcelona will publish it in June in a Spanish translation by Carolina Smith de la Fuente.

Goutte d’Or’s author Gabrielle Deydier, whose book On ne naît pas grosse (One Is Not Born Fat) was published in 2017, was videotaped being made up for the cover of The Observer magazine.

From the start, their books have sold well, perhaps not least because in keeping with the important role France’s network of independent booksellers play in sales, the team takes the time to visit booksellers, and not just in Paris.

According to Savary, their print runs vary between 4,00o and 8,000 copies, although Paname Underground sold 14,000 copies. Because Goutte d’Or’s stories are on contemporary subjects including pornography, drugs, and animal rights, producers tend to be watching.

“We often sell rights for series, documentaries, and films,” says Savary, adding that Judith Duportail’s book will become a documentary and they’ve had offers for a television series. A television film based on Deydier’s book aired recently.

Such interest from producers led the trio to create a production company with some associates. Savary says Les Productions de la Goutte d’Or lets the team supplement each book’s marketing with promotional content.

For Journal de L., the production group traveled to California with their author, Christophe Tison, to tape a promotional road trip which retraces some of the steps Nabokov’s characters Humbert Humbert and Dolores Haze (Lolita) take in the novel. 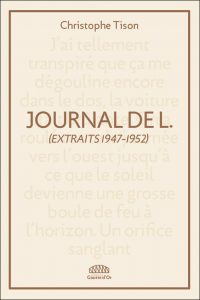 Tison has said he was inspired to write Journal de L. because he felt close to the character of Lolita, having been sexually abused as a child. He wrote about this in Il m’aimait (He Loved Me), published by Grasset. Tison is also published by Gallimard, but because Gallimard publishes Nabokov, they passed on Journal de L.

According to Savary Grasset’s editorial board decided by one vote not to publish the book in an acquisition meeting. Goutte d’Or wanted the book and met with Tison.

“We arrived with lots of energy,” she says, ‘and we convinced him. We showed him that we had really read his book very closely,” says Savary, adding that a bookshop owner also put in a good word for them with Tison. But they first had to get a green light from the Wylie Agency, which holds the rights to all of Nabokov’s work. After some negotiating, Wylie gave them the go-ahead, including for film and television rights.

In this kind of dogged approach, the Goutte d’Or founders are part of a new generation of French publishers such as Éditions du sous-sol, founded by Adrien Bosc. today the director of Points who has bought the paperback rights to Journal de L.  Their house is similar in its approach to Premier Parallèle and Anamosa.

And their readership mirrors the publishers: younger, urban, and eager to read books set in the here and now.

“Each book has a real identity and a specific audience,” Savary says. “We take inspiration from many fields in order to drive a book.”

Goutte d’Or’s biggest challenge now is to sell foreign rights to Journal de L. Several offers are on the table, the team says, and the first has come came from Serbia’s Vulkan.

Still, Clara Savary says they don’t like to rush into things. “We try to understand and research an environment before navigating our little boat into it.”

More from Publishing Perspectives on the French market is here and on independent publishing is here.