The Monte-Cristo Literary Prize, a new award program, becomes part of a prison class in France—and this week has named its first winning author. 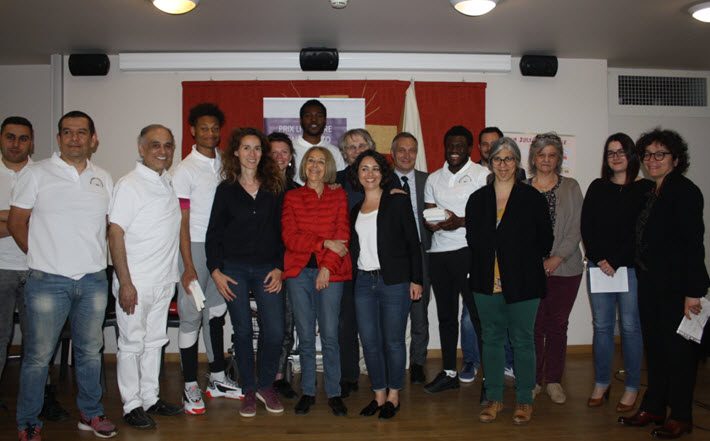 On Monday (March 13) just after midday, prize-winning authors Émilie de Turckheim and Daniel Pennac boarded a train leaving Paris. They were on their way to the inaugural Prix littéraire Monte-Cristo event—Turckheim as the winner for her book L’Enlèvement des Sabines (The Abduction of the Sabines), and Pennac as the prize’s patron.

“There was violence in all these books. … Life is rough. You’re living proof of that. “Daniel Pennac

In a country with more than 2,000 literary prizes each year, this one is unusual. The Prix Monte-Cristo jury is made up of detainees from Europe’s largest prison, Fleury-Mérogis, just south of the French capital. The jury is a practical class, one that on Monday conferred its first award.

Three women are behind the prize, which was established in March 2018:

In 1999, Gazier was awarded a now-defunct prize dubbed the Prisoner’s Goncourt for one of her novels, and she said the hours she spent discussing literature with detainees in a prison in Rennes left a deep impression. Guillaud has lectured about one of her books in a prison and Defer has given workshops in detention centers.

The trio received a quick response when they pitched their idea for a prize to the penitentiary administration. Fleury-Mérogis’ director, Nadine Picquet, the only female prison director in France, was willing to take on the project.

As it happens, Fleury-Mérogis is the only prison in France that has a school principal for the seven schools that are part of the facility, which houses a total 4,320 prisoners.

Of the six to nine male jury members for the Prix Monte-Cristo—attendance wasn’t always regular—all are in their last year of high school and were chosen from the D1 block, in which prisoners have already stood trial. Most of the jury members have been in prison for at least two years.

The guidelines for the prize are straightforward. A longlist of eight books must be by a French or Francophone author published the preceding year on the theme of confinement, and not necessarily pertaining to incarceration.

The jurors must write a report on each book. The prizewinner receives the award at the prison and autographs a copy of the winning book for each juror.

The following books were chosen: 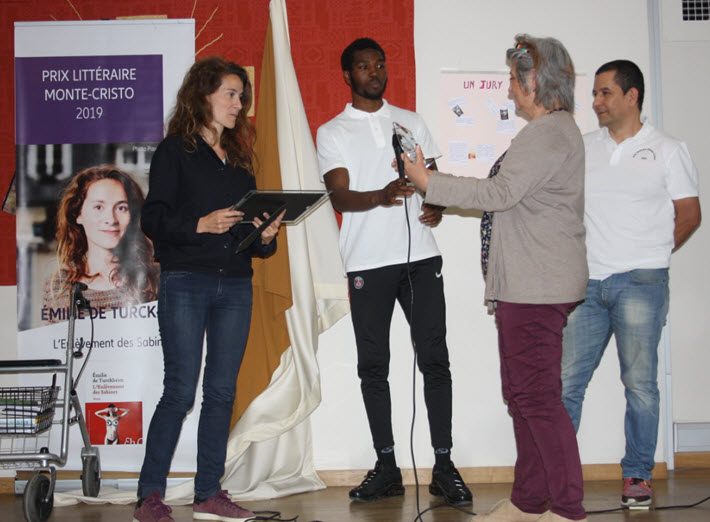 Author Émilie de Turckheim is given the Prix Monte-Cristo as inmate-jurors look on. Image: DISP Paris

At Monday’s award program, the jurors were the ones onstage. They ranged in age from a 19-year-old  in high-top sneakers to a 72-year-old great-grandfather with a walker.

All were dressed in white T-shirts with the prize’s name on them, paid for by jury president Luís Marin, who has one more year to serve.

“Since I was small child, I’ve thought about imprisonment. What does the spirit and the body do to continue to exist? Which part of our freedom cannot be taken, no matter what?”Émilie de Turckheim

Fellow inmates who also attend classes were on-hand as prison administrator Isabelle Brizard addressed the jury and thanked them, telling them, “When you’re all out of here one day, don’t forget this rich experience. Remember how important culture and books are.”

The class’ French teacher, Céline Declerck, had the inmates working on the books each week for a good part of the school year and said that some titles proposed for the award were defended with fervor, while others left the readers indifferent. But the group persevered and, in the end, one of the jury members had finished reading a book for the first time in his life.

The prize’s sponsor, Daniel Pennac is known for an interest in education and social affairs and has given writing workshops, himself, in a prison in Toulouse. He told the jury, “There was violence in all these books. … Life is rough. You’re living proof of that. When you read, it’s an escape, but we also learn to understand ourselves better.”

As jury president Luís Marin awarded the prize to author Émilie de Turckheim, he joked to his fellow inmates, making a reference to Alexandre Dumas’ The Count of Monte Cristo, “I encourage all my colleagues to escape via literature, because apparently it’s harder to escape this place than from the Chateau d’If.”

Émilie de Turckheim told the jury that winning this prize meant a great deal to her, because she’d spent more than 10 years as a prison visitor.

“Since I was small child,” she said, “I’ve thought about imprisonment. What does the spirit and the body do to continue to exist? Which part of our freedom cannot be taken, no matter what?”

Two detainees in the audience—Eddy, who said he likes to read science-fiction, and Christian, who reads biographies—said they’d like to be on the jury next year. Another prisoner added that he wants to get involved next year, but there’s just one problem—he’ll be released in six months. The afternoon seemed to be a moment of grace for all.

Michèle Gazier announced next year’s patron of the Prix Monte-Cristo: The Morocco-born Prix Goncourt-winning author Tahar Ben Jelloun, who has been shortlisted for the Nobel Prize in Literature.