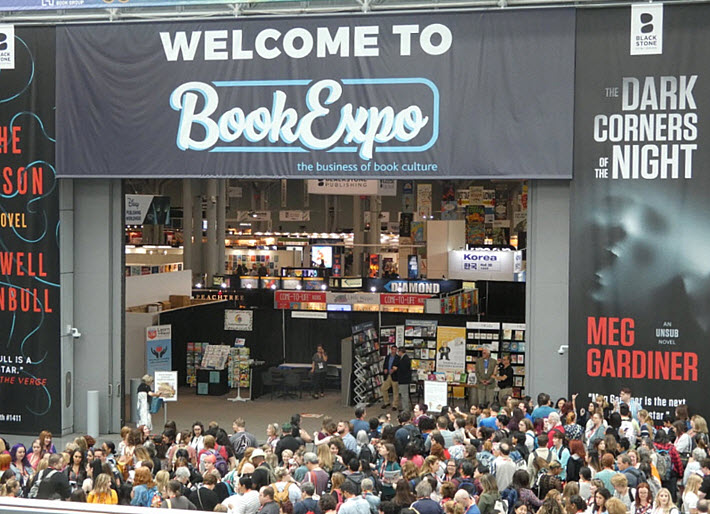 The trade show features tables and chairs for tired industry visitors, while more of the space once used by exhibitors now is a ‘non-book’ merchandise show.

With its new logo flying, Reed Exhibitions’ BookExpo 2019 has opened today (May 29) with a schedule of events that looked busier than the show’s corridors.

It’s always difficult to gauge attendance until preliminary figures are released after the show. But this year it seems that the wider aisles of the past couple of years are coupled with more free seating areas, especially around the western wall’s autograph areas, and this is hardly unwelcome: a generous supply of large, round conference tables are a big help to tired trade-show visitors who once struggled at the Javits to find a seat that didn’t belong to a publisher’s sales staff.

In fact, for the most part, the show looks better this year. Navy (from that logo) and black curtaining calls less attention to itself than honking yellow fabrics of the past, and the patchwork of carpeting seems less garish.

Unfortunately, the 12 to 5 p.m. opening hours on Wednesday appeared to have brisk but not bustling traffic.

The newly relocated New York Rights Fair—the rights-trading component rebranded last year by Publishers Weekly and BolognaFiere—looks very smart in that new color scheme but was all but empty during the afternoon on Wednesday. Perhaps the half-day opener was a deterrent to the level of rights trade chats everyone would like to see. 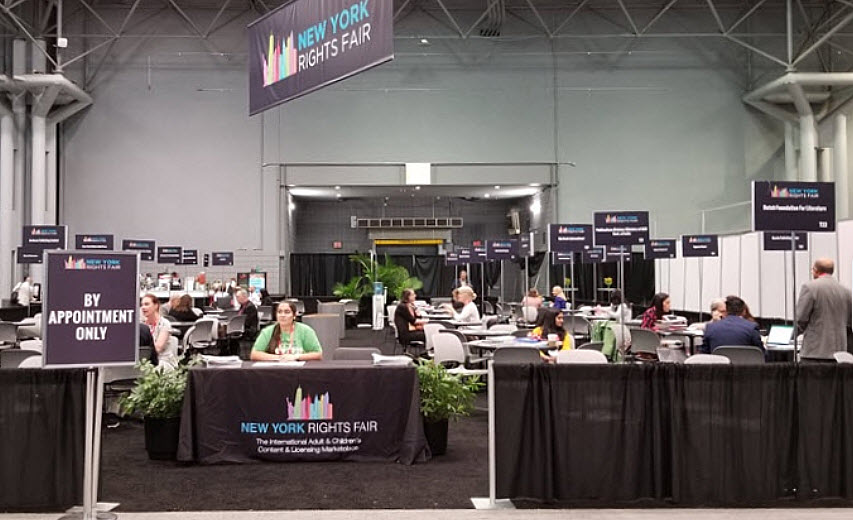 The trading tables area of the New York Rights Fair, in the second year of its new branding relocated at the Javits’ BookExpo. Image: Porter Anderson

The New York Rights Fair’s stage and its strong rights-oriented programming, however, is a welcome arrival at the Javits—find it in the northwest corner of the exhibition floor. It has a fine plexiglass enclosure that helps deflect noise from other performance areas. It also has a good, high stage and relatively uniform lighting on speakers.

“We received an edited Italian manuscript and a short English synopsis one week before the Frankfurt Book Fair of 2018,” Seegers told the audience, and the book simply took off. In “mostly pre-empts and auctions,” she said, furious meetings in the sold-out Frankfurter LitAg (Literary Agents and Scouts Center) were resulting in rights sales into multiple territories, and Seegers’ 30-minute meetings were being interrupted by people saying, “I hear you have a good manuscript, can you give it to me right now?”

The book has sold into 24 languages and/or territories so far, she said, “And that’s why you know Frankfurt is really where the action happens.” The Frankfurter Buchmesse LitAg center sold out of its more than 525 tables this year during the winter, and will feature more than 358 agencies during the fair (October 16 to 20). 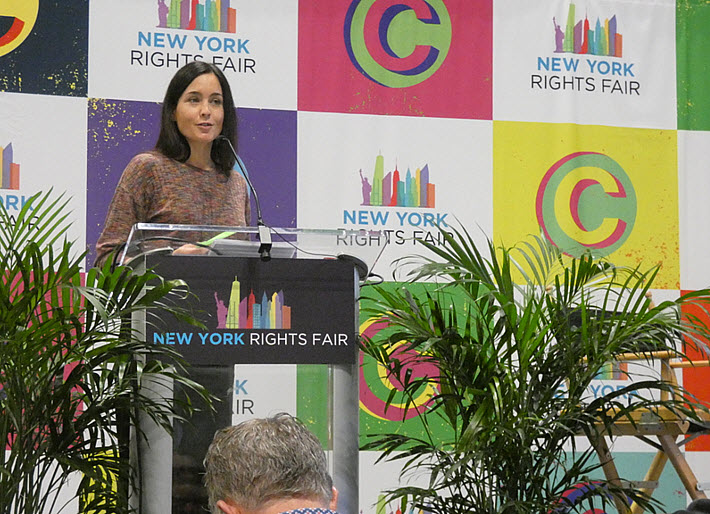 By contrast the Choice Stage, while having very good sound, has fallen prey to the problem we see at so many trade shows and conferences: no presentation lighting.

Mila talked a bit about HarperVia, the new translation imprint, saying, “We’re not looking for a specific kind of book or author. We’re reading, thinking of what we feel are stories that have the potential to become ‘part of the conversation,’ something we find interesting, maybe the plot, the voice, the specificity of where they come from. Many things make a story worth reading and enjoyable.” 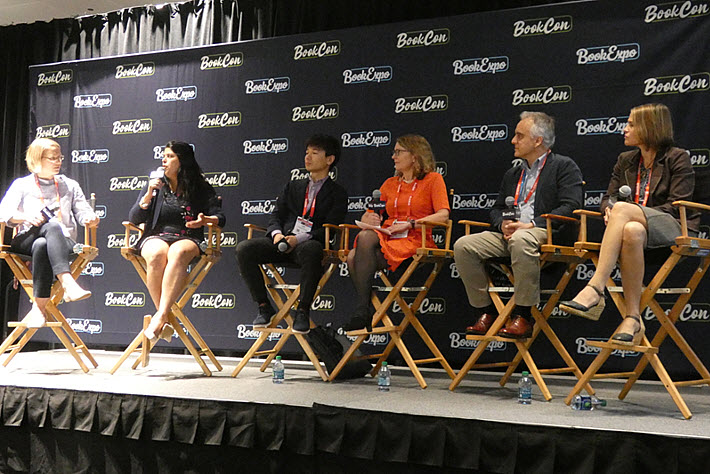 Shortly after the “New Wave” panel, HarperVia would have its New York launch moment at the HarperCollins pavilion. Publishing Perspectives readers will remember that a similar moment was celebrated at the London Book Fair in March.

HarperVia is led by Mila with Judith Curr, president and publisher of Harper One, Rayo, HarperCollins Espanol, and Amistad.

Curr, who spoke earlier this month at the newly reformatted Jerusalem International Book Forum, was welcoming well-wishers including FSB Associates’ Fauzia Burke, Giunte Editore’s LeeAnn Bortolussi, and many others with an afternoon toast to HarperVia at the HarperCollins stand.

As Curr told Publishing Perspectives, “I want HarperVia to be known as the place you have your English-language translation of a book published, then you use your English edition from us to sell into all your other languages.”

She was busy introducing Heddi Goodrich to visitors. Goodrich is the author of HarperVia’s forthcoming Lost in the Spanish Quarter (September 10), and Goodrich was busily signing copies of the advanced reading copy for a line of BookExpo attendees. 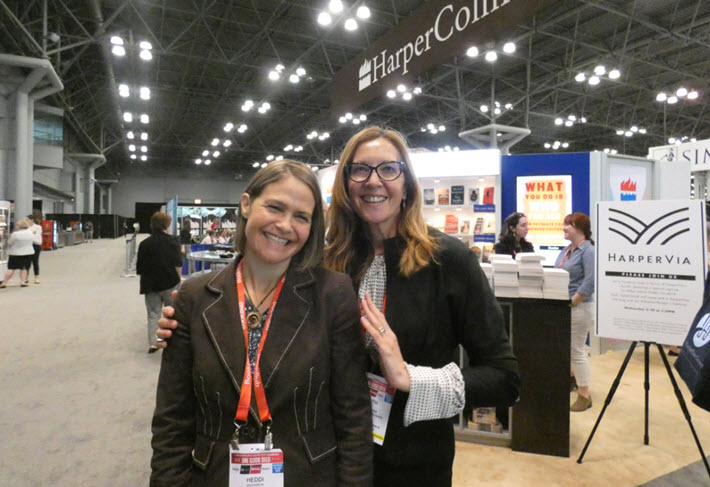 The area south of the bridge to the River Pavilion—which last year lay as empty and vast as an airplane hangar—this year holds a prairie-sized American Booksellers Association lounge. It, in turn, is adjacent to the “non-book items” exhibition show added this year, a knick-knack bazaar that reminds you of the duty-free maze at the airport, just without the effluvium of perfumes. 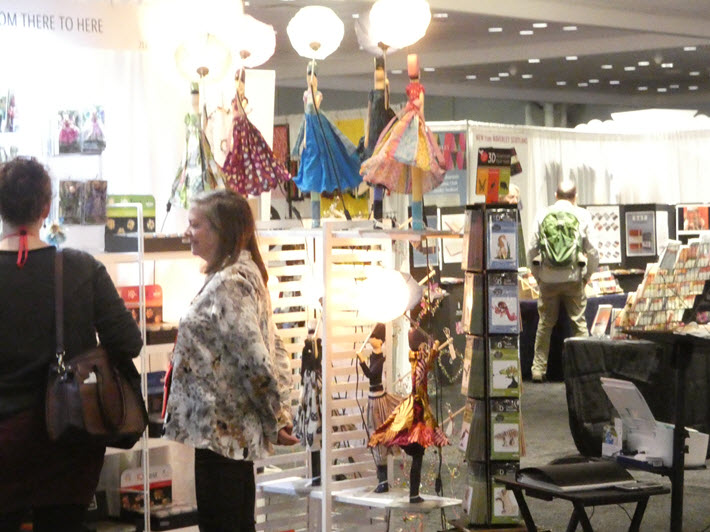 In the ‘Unbound’ non-book show area of BookExpo at the Javits Center in New York: knick-knacks for booksellers. Image: Porter Anderson

Downstairs at the Javits—once occupied by BookExpo America in its heyday—this week has a large franchisers’ expo. #CannibisWeek, signs keep reminding us, starts as BookExpo ends, just when we’ll all be ready for it.

Most of the E corridor of underground conference rooms is still held this year by BookExpo, and in 1E10, the Authors Guild’s executive director Mary Rasenberger moderated a panel attended by far too few trade show goers on “Novel Approaches to Combatting Piracy.”

With her were USA Today bestselling author Sarina Bowen (who hires an assistant to deal with illicit copies of her works turning up online), Macmillan’s anti-piracy manager Catherine Bogin, and Authors Guild staff attorney Umair Kazi.

Bowen made the point, “If an author or a small publisher is willing to wade in and actually learn what piracy looks like, you can actively combat [it] like a cop walking the beat. … If you’re in there and you now what you’re looking at, its simpler” to work against it. 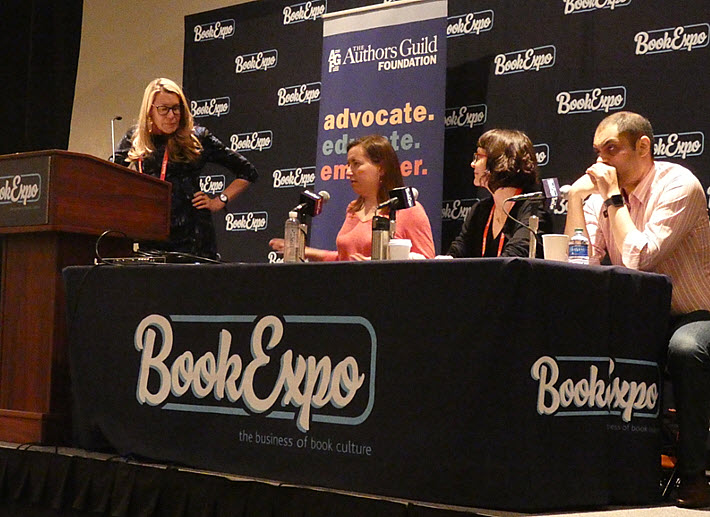 Booksellers in the House

Of course, the real question this year is how strong the attendance by booksellers might be, particularly after Reed so determinedly “reimagined” (their branding phrase) BookExpo last year for the express purpose of wooing those stores’ reps to keep publishers—who are there to entice booksellers, after all—to stay with the flagging trade show.

As the Associated Press’ Hilel Italie is reporting, the American Booksellers Association’s (ABA) outgoing CEO Orin Teicher has said that “non-book items” can account for 20 percent or more of a store’s overall sales, the rationale for the new UnBound village of novelties at BookExpo.

Italie reports that the ABA’s statistical news this year shows “The booksellers association again gained membership, rising from 1,835 individual companies (all but a handful independently owned stores) a year ago to 1,887, an increase of more than 20 percent since 2009. 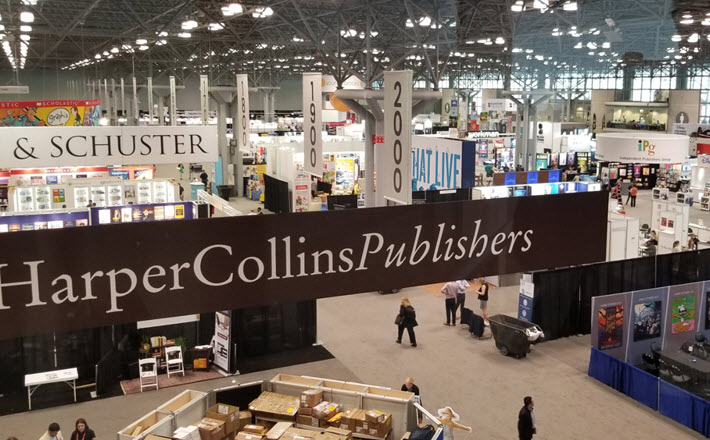 And, as anticipated, the Audio Publishers Association’s conference (APAC) in the River Pavilion and a couple of other sites in the building, ruled Wednesday at BookExpo, its 600-strong registration making it easily the heaviest draw of the new trade show.

We previewed this event here, and will have further coverage from the conference ahead. For those interested in audio—and who isn’t at the moment?—we also have today an interview with Ama Dadson of the Accra-based AkooBooks, breaking the ground for audio in the African markets. This, ahead of the International Publishers Association’s “Africa Rising” seminar in June at Nairobi. 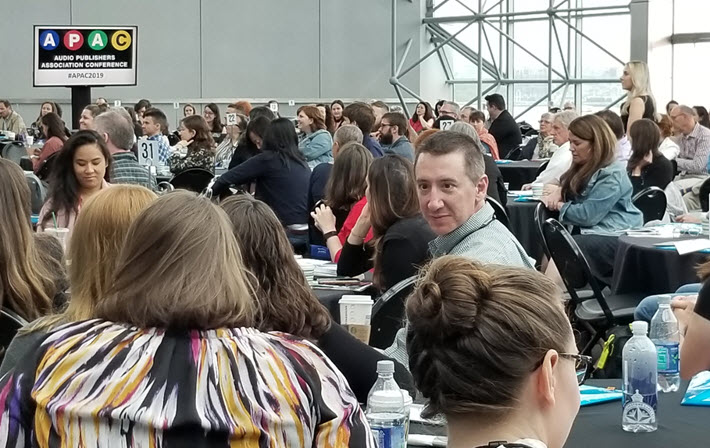 A Keynote Panel in a Large Room

At 11 a.m., the “keynote” event for the fair—something started last year with Len Riggio’s address—was held in the cavernous mainstage room downstairs and, alas, drew a crowd that looked quite sparse in a setting that can hold many hundreds of people.

Raccah talked about how important social media can be in raising public awareness, recalling a moment when her husband pointed out that P is for Pterodactyl was trending on Twitter. She explained that this was hardly an accident, the Sourcebooks team having worked many channels to generate that kind of groundswell of interest. 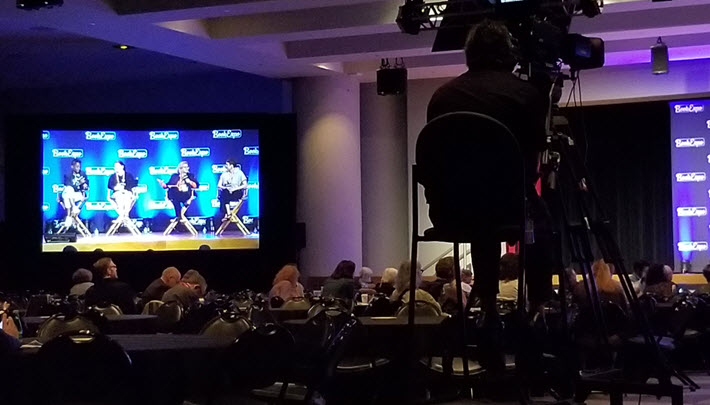 More from Publishing Perspectives on BookExpo is here, on the Audio Publishers Association is here, on audiobooks is here.