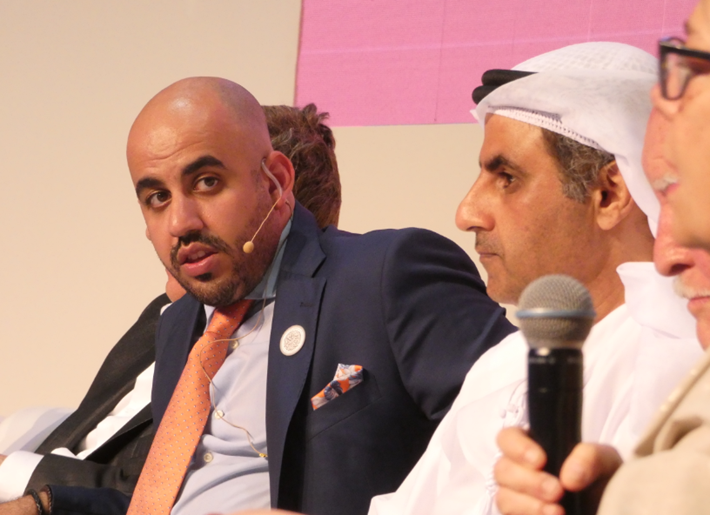 Hussain Al Mutawaa, left, winner of the 2019 Sheikh Zayed Book Award in children’s literature, listens to a fellow prizewinner on April 25 at the Abu Dhabi International Book Fair. Next to him is Ali Bin Tamim, the award program’s secretary general. Image: Porter Anderson

Toward ‘Gentle Resistance’ in Children’s Literature

In the closing event of this year’s Sheikh Zayed Book Award program, the 2019 winners gathered on Thursday evening (April 25 on the main stage of the Abu Dhabi International Book Fair).

Moderated by critic, researcher, and translator Khalil Al Sheikh and the prize’s secretary general, Ali Bin Tamim, the session followed the formal prize ceremony at Louvre Abu Dhabi on Thursday (April 24) and introduced the evening’s audience to this year’s group of winning writers, researchers, and language specialists in this program that awards a total of some US$1.9 million annually in prize money.

The program, created in 2006 and administered by Abu Dhabi Department of Culture and Tourism, commemorates “the late Sheikh Zayed bin Sultan Al Nahyan, founding president of the UAE and ruler of Abu Dhabi, and his pioneering role in promoting national unity and development.” 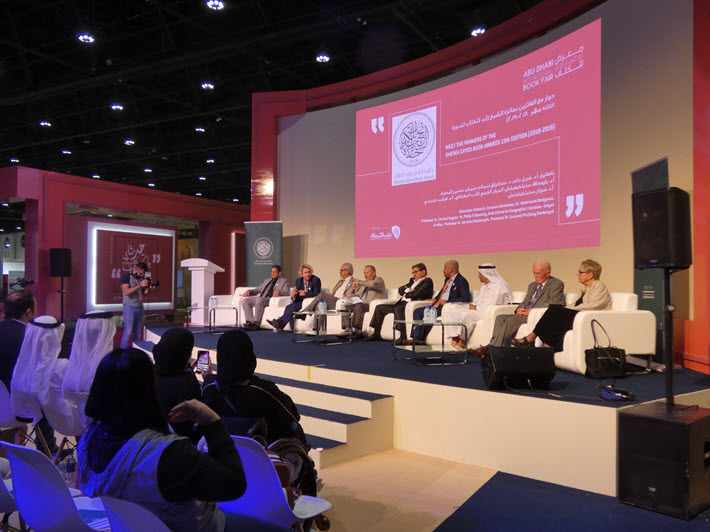 As Publishing Perspectives readers know, the children’s literature category is one for which the Zayed program offers translation funding to publishers, to help promote the program’s goal of widening Arabic literature’s reach.

And the winner this year of the Sheikh Zayed Book Award’s prize in children’s literature is the Kuwaiti writer and photographer Husain Al Mutawaa.

Mutawaa’s bachelor’s degree in literature and criticism is from the College of Arabic Language at the University of Kuwait. And while he began work in literature as a poet in 2009, he turned to stories in 2015 and then to novels.

His first book, Turab, was published in late 2017.

And the children’s book for which he’s been honored with the Zayed Award is Ahlam An Akoun Khalat Asmant (I Dream of Being a Concrete Mixer), published in 2018 by Al Hadaek Group.

In the book, Al Mutawaa carefully explores parent-child relationships, the issue of family expectations, and factors that go into making a young person into a self-directed responsible personality. This, as readers learn, may involve the dichotomy of what in life is destructive, what is constructive, and when one may be preferable to the other.

In Praise of ‘100 Different Monsters’ 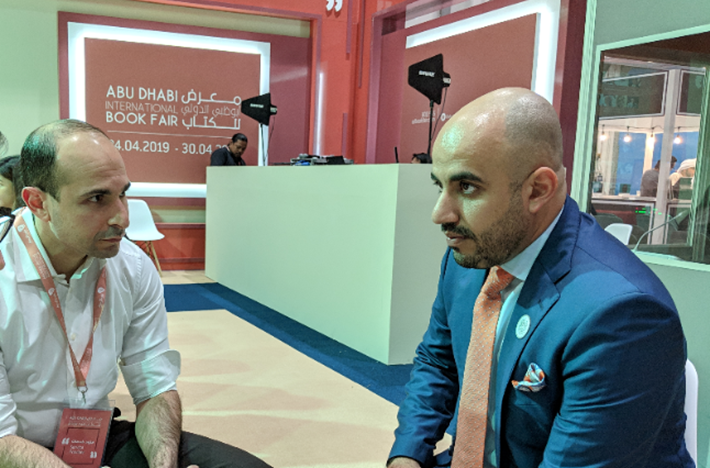 Publishing Perspectives had a chance to speak with Al Mutawaa after the session in Abu Dhabi and—with the expert assistance of one of the book fair’s simultaneous interpreters, Tariq Chelmeran—we were able to ask him how he sees the generally accepted problem of a waning interest in reading among children.

First of all, Mutawaa says, the problem of a weakening “habit of reading” in many parts of the world, the Middle East included, “‘is an extension of a problem with many of our adult readers.”

In too much work for adults, he says, “They enjoy reading, but we remove the knowledge aspect of reading,” in favor of entertainment. “And this transfers to the children.” 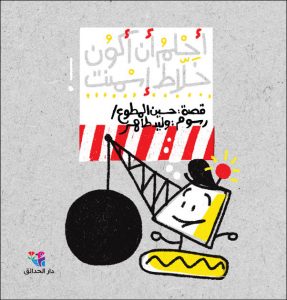 It’s one reason, he says, that the approach of gamey, playful fun experiences at public-facing book-fair events may not, actually lead children to want to read, but instead to look for other diversions.

A child’s choice, he says, in exercising what she or he wants to read, becomes all the more important when marketing approaches are seen to be “introducing toys into this sector by force”—by the populist peer-pressure of much of modern advertising, for example—can remove the elements of exploration and discovery, let alone imagination.

Al Mutawaa, in looking at children’s books themselves, he says, sees that “The more you add pictures, the more you lessen the impact of text.

“If 100 people are asked to read the word beast or monster,” he says, “the result should be 100 different monsters.” A literature that truly lives in its words should trigger in each imagination something different and personal.

But today, he says, there’s such a major overhang of visual content that each child sees the same monster, “the ‘typical’ monster,” so the imaginations of young minds are never set free to devise beasts of their own making, with personally impactful elements of meaning.

“Our ability to imagine weakens,” he says.

And the key—while it’s hard so far to see the best mechanism for us to use amid so much new and expertly made visual entertainment—is to “Think of a wave. And now think of standing up on it,” surfing. “This is what we’re doing. We’re riding the waves” of popular culture at this period in publishing’s development.

The remedy is? “To face the wave,” he says to take a stand, to resist the impulse to join in on visual and lightweight fun and to write content “that’s very close to the world children know, something that speaks to their reality” rather than simply offering “fun” and light-hearted distraction as so many entertainments do.

“We have to find a way around this problem. Children read my material because they find details of their own lives here.”

There’s a difference here, Mutawaa says, from his writerly point of view, between communication and entertainment. And the far more important thing to do is to communicate values. He talks of how he’s being told by young readers that they’re inspired when reading his work, prompted by it to read others.

“This isn’t me thanking myself,” he says, “but it’s about a kind of realism, our daily issues, from real lif

And one of his favorite responses from his readership so far, Al Mutawaa says, came from a 6-year-old girl who read I Dream of Being a Concrete Mixer and asked her mother, ‘Why are you trying to force me to be a doctor.'” The girl had found a sense of independence in considering what she might like to do.

And Hussain Al Mutawaa is ready with a phrase to help his colleagues in publishing think of new ways to approach literature, particularly for youngsters in an era of powerful, distracting, imagination-weakening imagery and bombardment: “gentle resistance.”

Resist the temptation to ride the waves of entertainment, he says. Think of resisting, with gentle, supportive treatment of real-world issues and information.

“Start with literature,” he says. “And create ‘gentle resistance’ to what’s all around the popular industry today.” 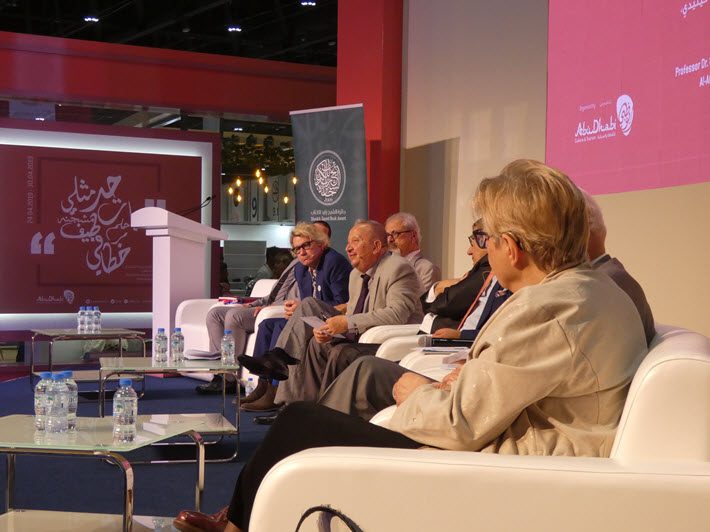