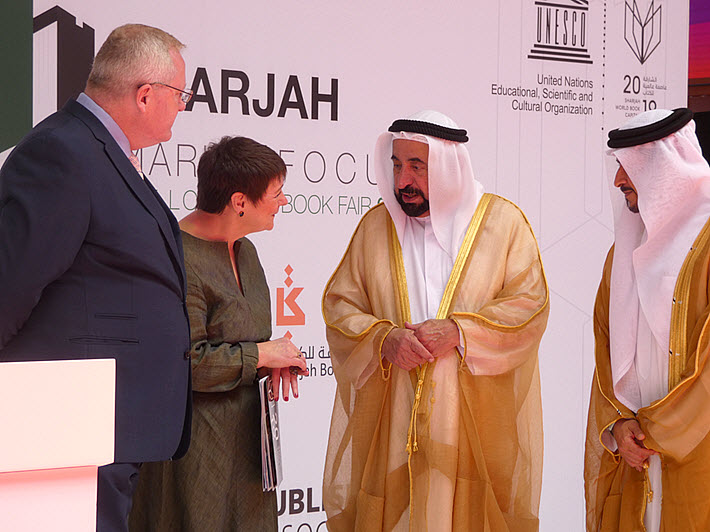 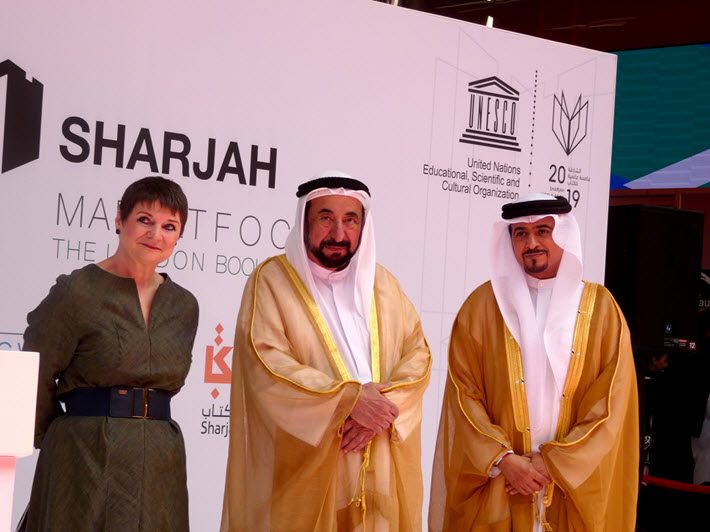 ‘We Believe in the Power of Books’

At the United Arab Emirates’ Sharjah Children’s Reading Festival this morning (April 25), it has been announced that Sharjah will be the London Book Fair’s Market Focus nation in the 2020 edition of the fair, which runs March 10 to 12.

The announcement caps an extraordinary week for Sharjah as it opens its year as UNESCO’s World Book Capital, stages its 11th iteration of the Sharjah Children’s Reading Festival, and now is named market focus for the London Book Fair (LBF) ahead.

What’s more, Sharjah is in a remarkable year for international book fair and trade show appearances. Al Ameri and Sharjah Publishing City’s Mohamed Noor Hersi tell Publishing Perspectives that these appearances in 2019 will include:

And in 2020, announced appearances include:

The UK trade show’s market focus—a similar program to that called “guest of honor” at some trade shows—is in its 16th year at this point and has seen more than 40 countries and regions highlighted, among them Mexico, South Africa, China, Australia, Korea, the Baltic nations, Poland, and this year’s Market Focus Indonesia.

And needless to say, one of the most prominent elements of the Sharjah Market Focus at London Book Fair in March will be a chance for more in the world publishing industry to become more familiar with the emirate’s free trade zone for publishing, unique in the world, Sharjah Publishing City.

In welcoming the chance to announce the market focus news, Sharjah Book Authority’s (SBA) Al Ameri said, “We’re delighted to be LBF Market Focus in 2020, to reinforce the vision of His Highness Sheikh Dr. Sultan bin Muhammad Al Qasimi, member of the Supreme Council and ruler of Sharjah, to strengthen bridges of cultural communication around the world.

“We believe in the power of books to foster knowledge, broaden horizons and open dialogue.

“London is the publishing capital of the world and at LBF 2020 we’ll present Sharjah’s unique cultural journey, which has flourished and expanded beyond the Gulf to establish itself as a global hub.

“We’ll showcase the growth in our local and regional publishing sector, and SBA’s specific efforts to boost the number of new translations into and out of Arabic, which are the bedrock of cross-cultural exchange between cultures.”

Speaking for London Book Fair, Thomas said that the announcement of the coming London Book Fair Market Focus honor came “in a week when Sharjah has catapulted itself even more onto the world stage” with its achievement of the UNESCO 2019 World Book Capital designation and the lavish theatrical performance created to open it.

The connection between Sharjah and the London Book Fair, she said, actually goes back 14 years. “During those years,” she said, “we’ve all watched with joy” as the emirate’s place on the world stage has advanced according to the course charted “more than 30 years ago by His Highness,” the Sheikh Sultan, to evolve into “the international powerhouse that it is today.

“Sharjah is the gateway to the Arabic publishing world,” Thomas said, “and we look forward tremendously to a multi-focused program” with strategic partnerships in place with the British Council, the UK’s Publishers Association, and, of course, the Sharjah Book Authority.” 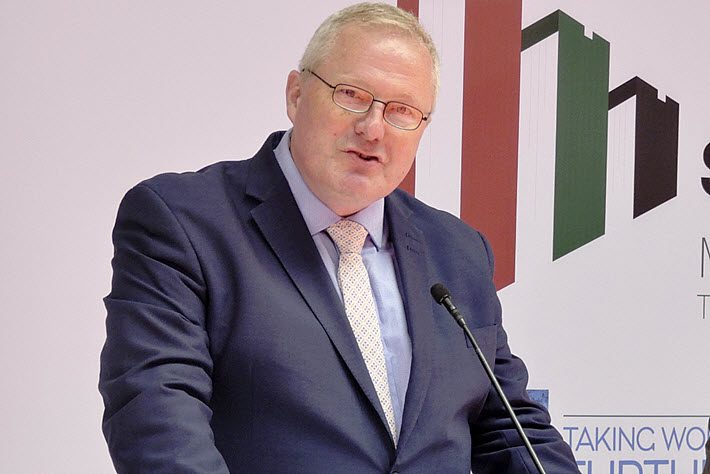 For the British Council, the country director, Gavin Anderson, spoke during the ceremony, saying, “It is entirely appropriate that two of the most significant book fairs globally are deepening their collaboration and exchange in this way, and of course this follows on from the United Kingdom being the Guest of Honor here at Sharjah International Book Fair in 2017.

‘In this year of Sharjah as World Book Capital, the Market Focus at London Book Fair will be an important part of a whole series of activities planned around the world to rightfully strengthen Sharjah’s role as a city and emirate of culture, and as the home of reading.

“This is such a fitting tribute to His Highness Sheikh Sultan and to Her Highness Sheikha Bodour for their long-standing commitment to literacy and literature, to culture, and to the development and support of home-grown audiences.

“At the British Council, we look forward to working closely with our friends and partners the Sharjah Book Authority and the London Book Fair to showcase Emirati writers and those from the wider Arabic world; to focus on Arabic/English translation; and to organize writer exchanges and residencies in both our countries.

“This will be yet another exciting year for culture in Sharjah, and yet another year of deepening the cultural ties between our two countries” 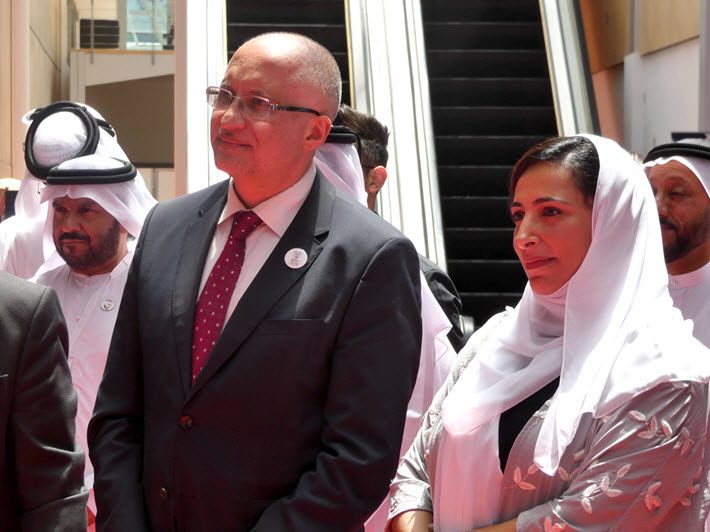 A Writer in Residence Exchange

This will culminate with both authors visiting the fair to discuss the program and further enhance cross-cultural dialogue.

Sharjah’s Market Focus pavilion will be coordinated by SBA and is being designed to showcase many cultural initiatives from across Sharjah including projects by Al Qasimi Publications, the emirate’s department of culture, the UAE’s Board on Books for Young People (UAEBBY), Kalimat Group, and the Dr. Sultan Al-Qasimi Centre of Gulf Studies.

It also is expected to highlight SBA’s flagship initiative, Sharjah Publishing City (SPC), which is the world’s first publishing and printing free trade zone, offering premium services and commercial advantages its offers to publishers, authors, and other literary professionals from around the world. 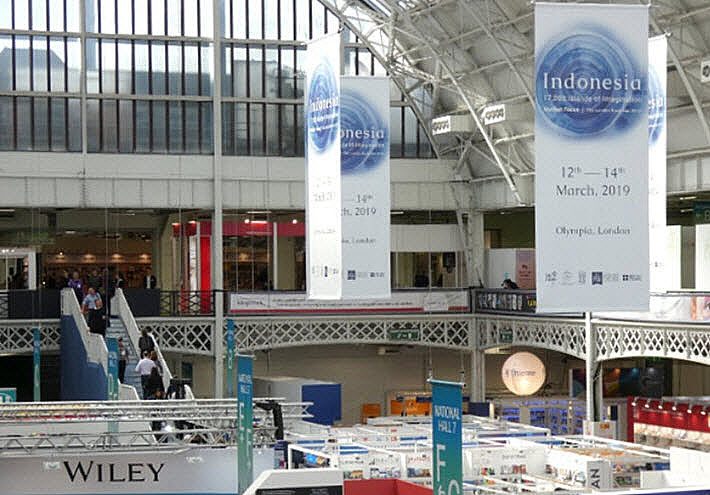 At the 2019 London Book Fair, banners hang over the exhibition floor at Olympia London for Indonesia’s presence as LBF Market Focus, predecessor to the coming 2020 Sharjah Market Focus next spring. Image: Porter Anderson

More from Publishing Perspectives on Sharjah and its publishing programs is here. And more from us on London Book Fair is here.