A new partnership with Penguin Random House allows Kinokuniya consumers to compare English and Japanese ebook editions. And a building in which Hemingway once was printed has been bought in New York. 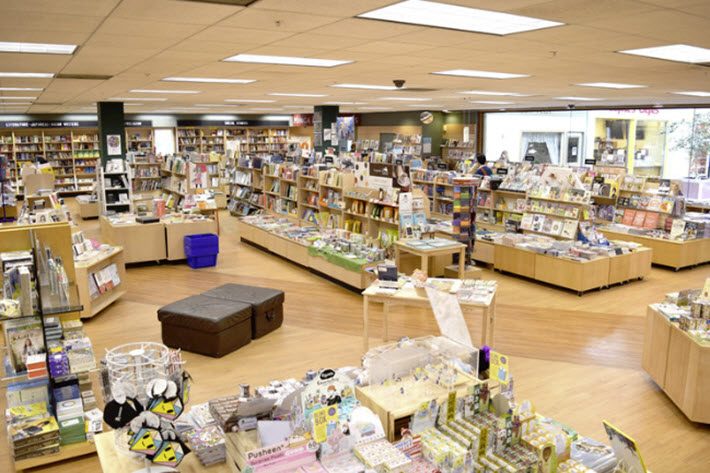 The San Francisco location of Kinokuniya’s physical bookstore chain at Japan Center mall was the first to open in the States, in 1969. The new partnership with Penguin Random House takes the publishers’ English ebook list into the company’s home market online in Japan. Image: Kinokuniya

‘For Customers Who are Studying English’

In other instances, the partnerships have provided academic ebook offerings from overseas publishers.

In this case, ebook editions of PRH’s trade front- and backlist titles are made available to customers through the Kinokuniya’s Kinoppy Ebooks service.

In media messaging from its London offices in New Broad Street, Konikuniya’s announcement says that it s apps, for iOS and Windows, “allow readers to open multiple ebooks simultaneously, making it easy for customers who are studying English to compare texts in multiple languages.

“Kinoppy’s convenient functions, such as full-text search, highlighting, note-making, and the ability to read on up to five devices, are available for English-language ebooks, as they are for Japanese books.”

Press materials stress that PRH is a major publisher of Japanese work in translation, with Haruki Murakami’s work, as an example, “found on the Knopf, Ballantine, and Vintage imprints.”

The West 43rd Street Press Building, at one time called The Scribner Building, has been acquired in New York City by DivcoWest. Image: Rasky Partners

It’s a site on which typesetting, platemaking, printing, and binding was done for novels by Ernest Hemingway, F. Scott Fitzgerald, Stephen King, Tom Wolfe, and others.

This is not the spot some of us know as the Charles Scribner’s Sons Building—the former bookstore site at 597 Fifth Avenue—nor is it the Old Scribner Building at Fifth and 21st Street. This property is in Hell’s Kitchen, at 311 West 43rd Street in Manhattan, and comprises 192,000 square feet in 15 stories.

Citizens Commercial Banking is leading a US$91 million loan for DivcoWest’s acquisition.

Media messaging on the project doesn’t indicate what name the building will have under new ownership, nor whether something of its publishing-heyday past will be represented at the property.

More from Publishing Perspectives on bookselling and Kinokuniya is here, and more of our Industry Notes series is here.