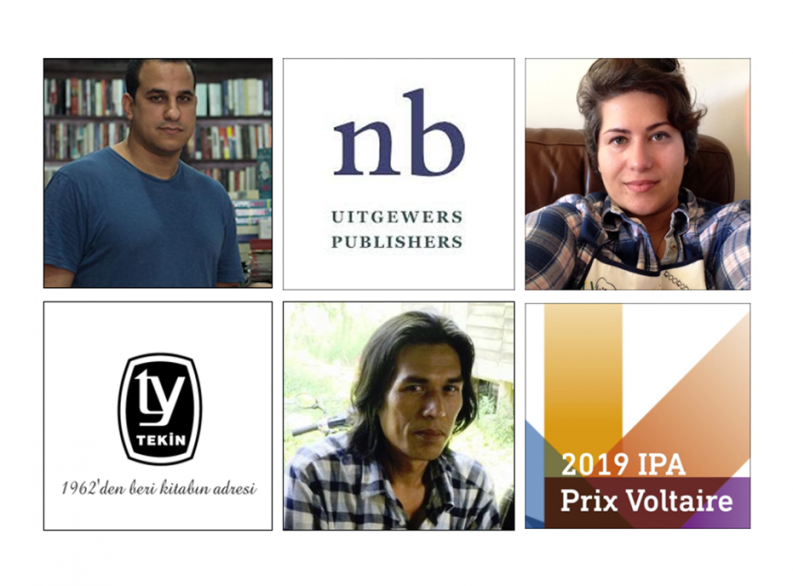 Book publishers on the 2019 IPA Prix Voltaire shortlist come from Egypt, Iran, Myanmar, South Africa, and Turkey. The winner of the award will be named in June. 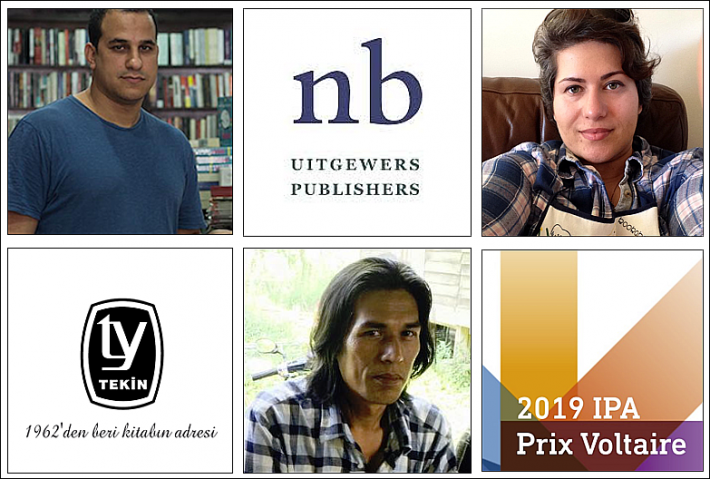 In Geneva, the International Publishers Association’s Freedom to Publish Committee has released its 2019 shortlist today (April 16) for the Prix Voltaire, which is conferred in recognition of “exemplary courage in upholding the freedom to publish and enabling others to exercise their freedom of expression.”

Led by committee chair Kristenn Einarsson—who is also CEO of the Norwegian Publishers Association and chair of RiksTV and Norges Television—the announcement brings back into focus a program familiar to Publishing Perspectives readers who have seen its profile rise in recent years with the prominence of the prize’s honorees—most recently the Swedish national bookseller Gui Minhai, long detained in China, and given last year’s Prix Voltaire in February 2018 at the IPA’s 32nd World Congress in New Delhi.

In announcing the new list of contenders for the recognition, Einarsson is quoted, saying, “The work of these publishers is remarkable, working in extremely difficult circumstances to bring authors’ words and thoughts to readers.

“They have all demonstrated phenomenal courage and we are proud to recognize them in the 2019 IPA Prix Voltaire shortlist.”

The Freedom to Publish Committee will select the 2019 IPA Prix Voltaire recipient from this list, and the award presentation is to take place at the Korean Publishers Association’s Seoul International Book Fair on June 21.

The members of the IPA Freedom to Publish committee are, in addition to Einarsson:

A familiar face on this year’s list is that of now three-time nominee Azadeh Parsapour, who last September received the Association of American Publishers’ freedom-to-publish award and who spoke with Publishing Perspectives in Sharjah about her work in publishing censored content from Iran.

Including Parsapour, this year sees five shortlisted candidates from as many nations. In three cases, the nominee is a person. In two cases, publishing houses are nominated.

The IPA Prix Voltaire comes with a purse of 10,000 Swiss francs (US$9,947), which is made possible by contributions from publishing houses and organizations that share the values recognized by the award program.

In brief notes about the nominees, we have the following information. 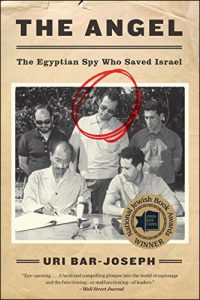 The founder of the Cairo-based Tanmia bookshop and publishing house Lofty reportedly was sentenced in February to five years on charges of divulging military secrets. Allegations in the case involve an Arabic translation of The Angel: The Egyptian Spy Who Saved Israel by Uri Bar-Joseph, a book published in the United States by HarperCollins in a translation by David Hazony.

The Netflix film, The Angel (2018) in director Ariel Vromen’s production written by David Arata, is based on the Bar-Joseph book.

PEN America refers to an ArabLit report that says, in part, “The case started when Tanmia’s founder signed an agreement with Arab Scientific Publishers to publish an Egyptian edition of the controversial book about Ashraf Marwan (1944-2007), alleged to have spied on Egypt for Israel. Egyptian officials deny that Marwan was a spy.”

ArabLit says that Lofty is said to have undergone a military trial and that charges inolved spreading false rumors and disclosing military secrets. An Erem News report dates Lofty’s arrest to April 2018.

Tanmia Bookshop opened in 2011 and was written up in a listing of Cairo bookstores in 2014 as being a family store run by Lofty and his brothers. 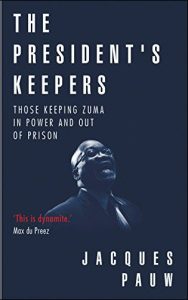 South Africa’s NB Publishers produced The President’s Keepers: Those Keeping Zuma in Power and Out of Prison (October 2017) by Jacques Pauw, from its Tafelberg imprint.

The exposé of the Jacob Zuma government describes a “shadow mafia state” operating against political foes of the fourth president of the democratic era in the country and alleges deep levels of corruption.

The South African state security agency is reported to have issued a cease-and-desist order to halt the sale of the book. That official condemnation reportedly raised the book’s visibility and popularity, Jennifer Malec at the Johannesburg Review of Books reporting on August 29 that the book had won the Nielsen Booksellers Choice Award, which is selected by a vote of South African booksellers.

“In his acceptance speech,” Malec’s story reads, “Pauw said he believes it was the state security agency’s attempt to ban the book that made it the bestseller it is. ‘They never learnt from apartheid, did they?’ he said. ‘As soon as you tell people not to do something or not to look at something, or not to read something, that’s exactly what they want to do. So when … they tried to ban the book—this book exploded.’”

She spoke with Publishing Perspectives during an apperance in the professional program at the Sharjah International Book Fair, where she appeared onstage with Einarsson, the IPA’s current vice-president, the Sheikha Bodour Al Qasimi, and  Razia Rahman Jolly, the widow of Bangladeshi publisher Faisal Arefin Dipan, who was murdered at his office, allegedly by religious extremists, in October 2015.

Parsapour is based in London and, while safe there, herself, told us that she has to worry about writers inside Iran with whom she works.

“For me,” she said, “the damage is that my emotional connection with Iran is stopped” by her inability to go home. “But I’m living in a free country, I can have protection, and so forth.

“But there’s always a risk. When we established Nogaam” six years ago, “we did risk assessments” and, as a result of that examination of the project, “we offer each writer we work with a chance to use a pen name if they prefer, to keep them safe. But of the 41 titles we’ve published until today, only two or three people have chosen to do that. …Always I worry about my writers. 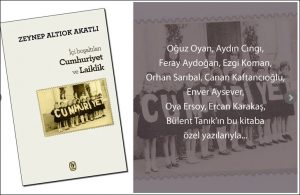 Currently highlighted at the Tekin site, ‘The Republic and Secularism’ by Zeynep Altiok Akatli (May 2018)

Cavit Nacitarhan of Evrensel Publishing House–which won the Prix Voltaire in 2017–is among a group of more than 50 parties from Turkey’s publishing community nominating Tekin Publishing House, according to IPA Freedom to Publish committee.

Founded in 1962 and having published more than 600 titles, Tekin, according to the IPA’s media messaging, “has a history of publishing books that hold the country’s leaders to account” as well as for standing behind its authors.

Tekin is said to have faced numerous financial penalties and has found its books removed from various retail outlets. The company is reportedly not welcome at some book fairs. Last year, Tekin was given the Turkish Publishers Association’s Award for Freedom of Thought and Expression.

In its self-descriptive text, the publishing house writes that the company was established “by Kemal Karatekin on Bâb-ı Âli avenue, at the heart of the press and broadcasting [hub] in Cağaloğlu. From the day it was founded, it aimed to publish books aimed at the cultural enlightenment of the society. In addition, its books [are intended to] contribute to the people who are asking, questioning, being sensitive to the society and the environment.

“With this line of publication, [the company’s content is meant for] “people who are bright, republican, socialist and democracy-conscious.

“In essence, Tekin has adopted the principle of not sacrificing ethical and aesthetic values.”

Moe Way and The Eras 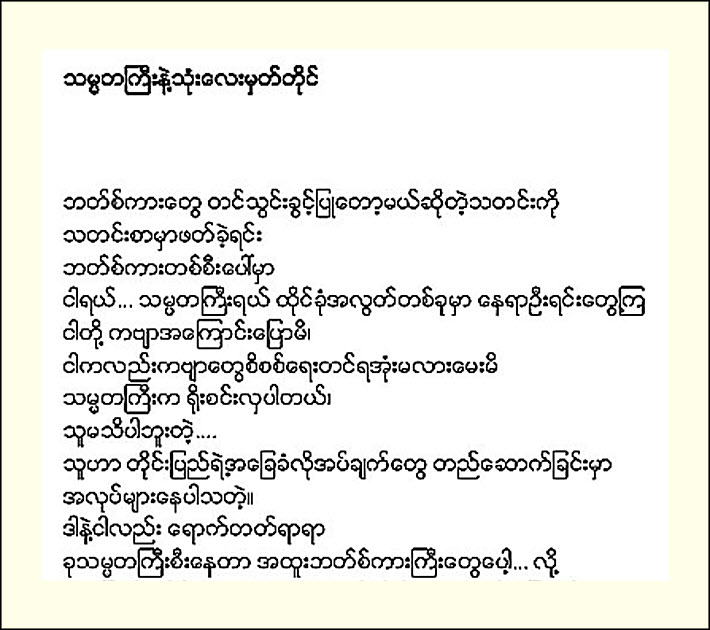 A excerpt of poetry by Moe Way in its original text. Image: Poetry International Web

Yangon’s The Eras (Hnit-Kar-Lah-Myarr) is a publishing house established in 2001 by Moe Way, the pen name of author and poet Sein Win. Like Azadeh Parsapour, Moe Way is a former nominee for Prix Voltaire recognition.

Persevering against financial odds and many instances of Myanmar’s state restraints, Moe Way was credited in a mention from PEN International in 2013 with “maintaining the existence of dedicated poetry publishing in the country over the last two decades.”

In an article from 2016 from the IPA, it’s described how “Myanmar’s Press Scrutiny Board imposed severe restrictions on poetry publications, and most poems receiving the board’s permission [to be published] were redacted beyond all recognition, often with lines or stanzas missing, or even whole poems blacked out.”

“Until 2004,” the article reports, “Moe Way ran The Eras single-handedly… The Eras gradually became a leading poetry publisher, publishing collections by the pioneers of modern (‘Khit Por’) Myanmar poetry, such as Maung Chaw New, Aung Cheimt, Thukhamein Hlaing, and Phor Way, and playing a central role in changing the course of mainstream poetry in 2006 with the publication of Zeyar Lynn’s ground-breaking collection, Htin-shar-di-a-hmat-a-tar (Distinguishing Features) and works by emerging young poets.”

At the time of its 2016 look at the work, the IPA was reporting that Moe Way’s company had published 176 titles, 80 of them poetry collections.

At Poetry International Web, you can see a posting of Ko Ko Thett’s English translation of Moe Way’s 2013 poem “Three/Four Stops With Mr. President” in which he imagines bumping into the president on a bus in Rangoon as it transitions to Yangon.

Quoting an excerpt from that poem:

“Import license for new buses will be issued again”, the headlines roared.
Now on a packed bus, as we elbowed each other for an empty seat,
I noticed Mr. President.
Mr. President Sir, would our poems still have to be
juiced through the board of the press scrutiny?
I have no idea. I’ve been busy with infrastructure projects.