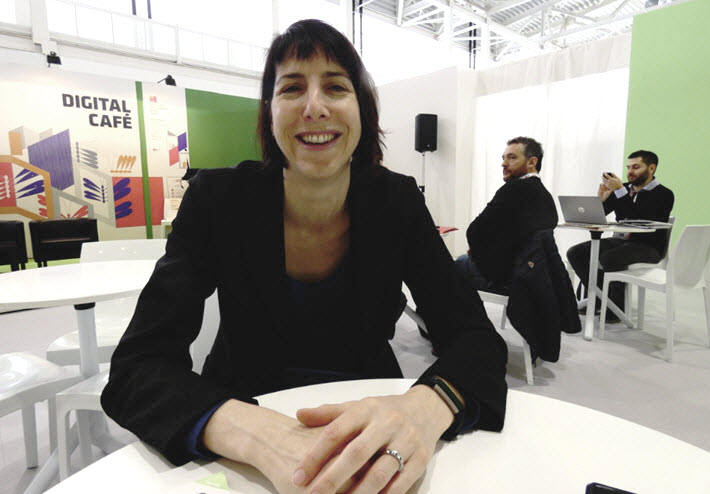 The Audio Publishers Association, Bookrepublic, and Bologna Children’s Book Fair have begun surveying various audiobook markets to give us a global overview of this growing format.

Availability of Audio is the ‘Game-Changer’

Amid so many programs and events last week at the 56th Bologna Children’s Book Fair in Italy, a new first-time effort at sizing up the international audiobook marketplace was introduced during a session called “Listen Up.”

The report is titled with appropriate caution “Global Audiobooks Data: Steps Toward Understanding the Size of the Market.” It’s the collaborative effort of the Audio Publishers Association (APA) and Bookrepublic with Bologna Book Fair. It was introduced during the fair by APA’s executive director Michele Cobb and by Marco Ferrario of Bookrepublic. Ferrario works with Storytel’s Italian operation as well as running Bookrepublic.

The new work that Cobb has begun on understanding the international audiobook market will be of interest in Frankfurter Buchmesse’s (October 16 to 20) new Frankfurt Audio marketplace for the format and content and its centerpiece Frankfurt Audio Summit.

As Cobb was careful to point out during an interview with Publishing Perspectives, there are obvious pitfalls in trying to assess audio in world publishing markets today. There’s no consistency or standard in data collection from nation to nation. And in some cases, online retailers withhold sales data as proprietary information, which means the industry can’t see and count everything.

Early Looks at a World of Audiobooks 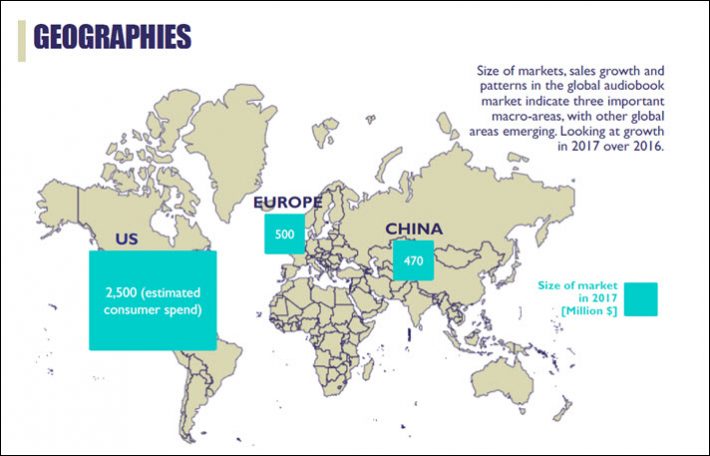 Needless to say, if a reliable set of statistics can be developed on a general higher-level view of audiobooks on the world scale, many publishers, authors, and markets can benefit with the predictive and comparative analysis likely to result.

But of course, in the early stages of trying to develop an international view of the format, there are unavoidable apples-and-oranges comparisons.

For example, the new report cites 54 percent of American audiobook users being under the age of 45, and 74 percent of listeners preferring their smartphones as a leading device. In China, by comparison, available data indicates that an online audiobook platform like Ximalaya had as many as 40 million users daily at the end of 2018.

In putting together a first attempt at an overall picture, Cobb and her colleagues have identified several categories of geographical consideration.

Three “macro-areas” of key importance, for example, are: 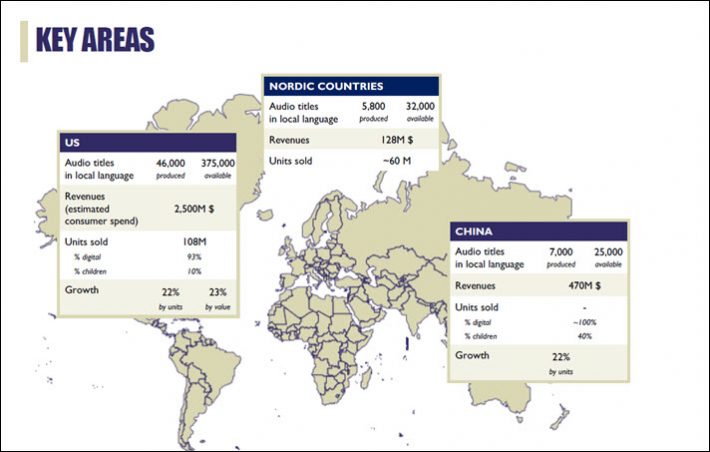 “Key areas” of growth are identified as:

“Audio strongholds” are a classification comprising: 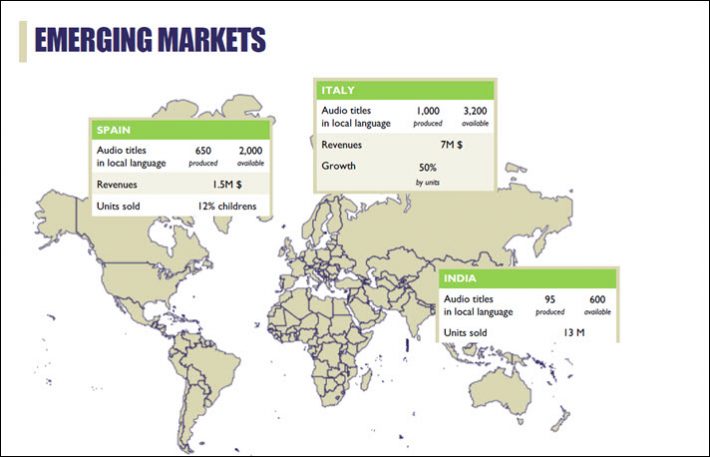 And “emerging markets” at this point are seen in Cobb’s estimation as including:

And among the broader observations the report is able to offer: 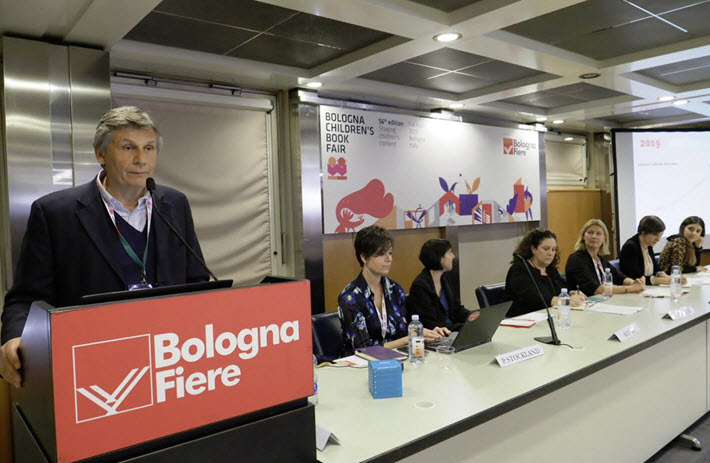 As Publishing Perspectives readers know, Cobb’s APA has become the leader in describing and analyzing the fast-growing audiobook sector in the biggest market for the format, the United States. The organization’s annual reports are a key gauge in understanding the new popularity of this “reborn” format. Once hobbled by the inconvenience and expense of tapes and CDs, audiobooks are the big beneficiary of downloads and streaming distribution in many parts of the world. The plethora of devices—smart phones, smart watches, smart speakers, tablets, and others—has facilitated rapid adoption even among “reading-reluctant” audience segments such as men and boys.

In her presentation, Cobb mentioned several trends to keep in mind, most tantalizing among them the idea of listeners as “story directors” who with developing technologies may be introduced to more interactive audio experiences. She also tells us that sheer availability of material may be the biggest driver of audiobook development in a market. (This is a trend discussed with us by Sebastian Bond of Kitab Sawti at last year’s Abu Dhabi International Book Fair.)

“That’s really the game-changer,” Cobb says. “More availability. There are so many titles being produced that a reader will try an audiobook,” seeing that something he or she was interested in reading, “and then they stick with it. It doesn’t mean that is all of their reading, but a healthy portion.”

With APA survey support, Cobb has been explaining for years now the attractions many audio fans cite of being able to listen while doing other things, or—among some Americans studied—stopping other activities and focusing on listening to a book as a means of relaxation. What’s more, the digital disruption of how many books re released—with “windowing” various formats all but a thing of the past—has meant, as Cobb points out, that “If someone is going to take a book for the weekend to the beach, now they have options” of being able to pick up a new release’s hardback or ebook edition, or the audiobook.

“And audio really has been simultaneously released” in many instances “for more than a decade,” Cobb points out.

And one of her more interesting observations is that audiobooks for children may move much more quickly if retailers learn to create “safe” spaces for them to shop and select what they want to hear without parents having to worry that they’ll wander into adult content.

“When it comes to my daughter, something like Epic is perfect,” Cobb says, referring to the online curated retail site for children 12 and younger. “It’s a site that’s primarily for ebooks,” she says, though it does have a relatively small audiobook section.

“But more places like that, all children’s content, well-curated,” she says, will change the reach of publishing’s audio for younger readers in a way that parents can approve.

At the Bologna Audiobook Event

Part of BolognaFiere’s series of “flagship conferences,” Listen Up! was an extended session featuring a large panel of specialists who included, in addition to the APA’s Cobb and Bookrepublic’s Ferrario: 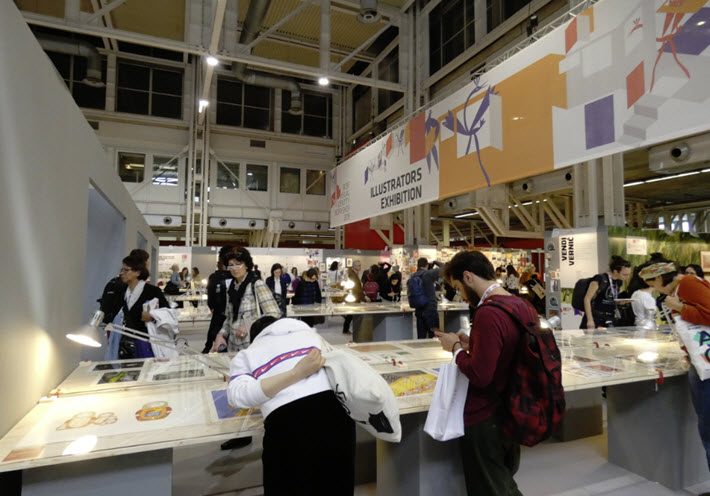 More from Publishing Perspectives on audiobooks is here. And more from us on Bologna Children’s Book Fair is here.