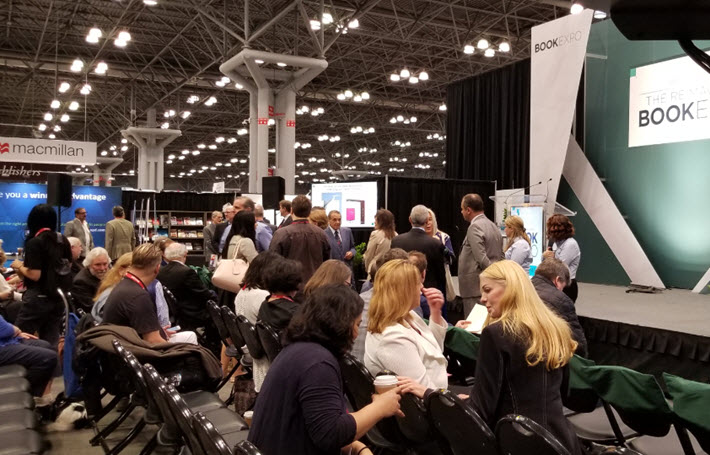 As its attendance and exhibition levels declined in recent years, BookExpo this year is emphasizing face-to-face contact to draw book-business players. 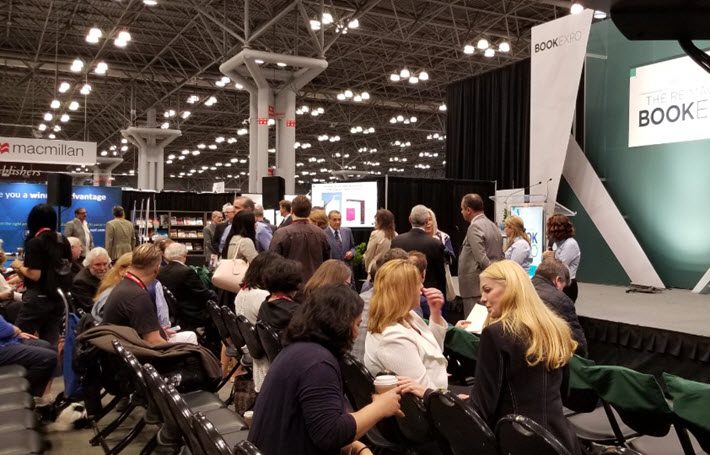 The 2019 BookExpo pitch to the industry revolves around the spontaneous personal contact the trade show provides participants, something often seen in the various show-floor stages’ audience areas before and after events. Image from BookExpo 2018: Porter Anderson

As we begin to clear some of the first major European trade-show and book-fair events for the year, mailings from New York City’s BookExpo (May 29 to 31) are coming at a faster rate, with appeals for exhibitors and bits of programming on tap.

This show has seen some challenges, particularly having had something of a misfire last year, when a heavy emphasis booksellers and their importance to the business attracted fewer booksellers than in the past.

The resulting complaints and confusions have led organizers of BookExpo and New York Rights Fair to work together and return the rights-trading center to the Jacob Javits Center this year, eliminating slow bus shuttles between the venues.

Perhaps in a sign of the times for American bookselling and the inventory diversification many stores have had to deploy, BookExpo is putting in a dedicated exhibition space for vendors of non-book retail items, that area to be called Unbound, like the name of the reader-funded publishing house in the UK.

With Ingram likely to be the dominating exhibitor again this year, the programming is stressing “the buzz, excitement and passionate discussions” of IRL (in real life) trade show over Internet interactions. To that end, BookExpo is renewing its “speed dating” session for booksellers and publicists and adding a new iteration with editors.

What may be an interesting new focus will be the designation of a stage on the show floor for presentations from independent publishers’ authors and editors, something that sounds like a smart move. Coverage indicates that the show is working to help independent publishers with travel costs in some cases to help ground this part of the programming.

In terms of some of the major set pieces of the annual event, the lineups of trade authors speaking at the breakfast event series have been announced.

Actors and comedians Megan Mullally and Nick Offerman, authors of The Greatest Love Story Ever Told (Penguin Random House), will co-host the event.

How We Fight for Our Lives
Saeed Jones
Simon & Schuster, October 8

The Secrets We Kept
Lara Prescott
Alfred A. Knopf, September 17

More from Publishing Perspectives on the New York Rights Fair is here and on BookExpo is here.