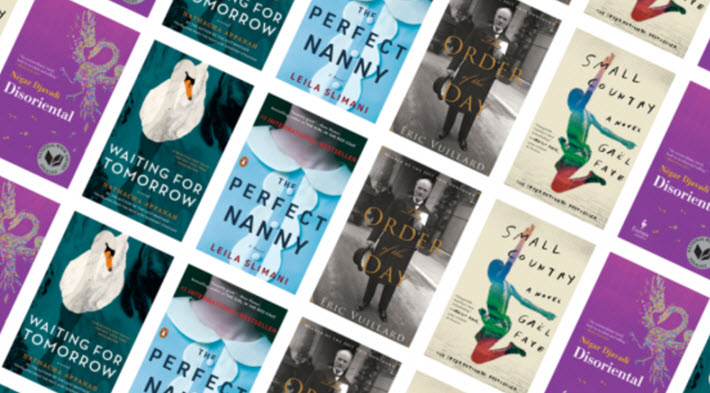 This year’s Albertine Prize shortlist of five works translated from French into English are by authors from France, Rwanda, Morocco, Mauritius, and Iran. 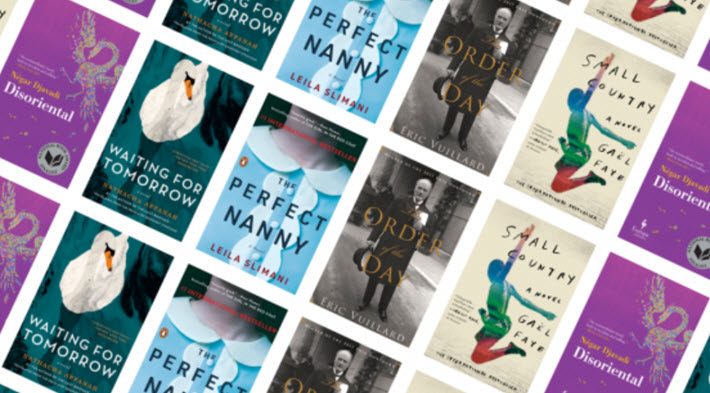 Voting on the Winner Continues to April 30

We reported that last year’s winner of the Albertine Prize was Anne Garréta’s Not One Day in its English translation by Emma Ramadan (Deep Vellum, 2017).

The Albertine Prize is co-sponsored by Van Cleef & Arpels and the Cultural Services of the French embassy, and recognizes a work of contemporary Francophone fiction translated into English and published in the United States within the preceding calendar year. Additional sponsorship comes from Air France, Pommery, Lit Hub, and The Mark.

On the way to a winner, the program highlights a shortlist of five new works by authors from countries in which French is spoken. This year’s shortlisted authors are from France, Rwanda, Morocco, Mauritius, and Iran.

The selection committee includes the Albertine Prize honorary chairs, author and translator Lydia Davis and French literary critic and broadcast host François Busnel. In addition, the committee is aided by staffers from the Albertine bookstore and the French embassy’s book department.

As you make a selection for your vote, you’ll find an excerpt from each title to read in PDF.

The company has put several questions to each of the shortlisted authors about their work, and we’ll bring you some of their comments as we list them.

A finalist for the United States’ National Book Award, Disoriental by Négar Djavadi and translated by Tina Kover (Europa Editions, May 2018). She is from Iran, and is a screenplay writer living in Paris.

In her exchange with Albertine for the award program, Djavadi is asked when in the day she likes to write, and (as is the case with many writers), she says she prefers early morning.

“I begin to write very early in the morning, around 5:30 am. I’m not a heavy sleeper, so it doesn’t hurt me to wake up early and get immediately to work.

“Early in the day, I get the impression—given that around me all seems frozen in time—that nobody and nothing can disturb or interrupt me. I feel withdrawn into myself, serene, calm; absolutely free to write. Some mornings, when I don’t begin at this early hour, I find myself feeling as though my day has ceased even to be my own; as though, failing to begin the day properly, it has eluded me.”

Gaël Faye, the author, songwriter, and performer, was born in Burundi to a French father and Rwandan mother, spoke in October at Albertine during a trip to New York. His Small Country s translated to English by Sarah Ardizzone (Penguin Random House, June 2018)

Last fall, Publishing Perspectives wrote about Faye’s journey to becoming an author and his appearance at Paris’ Shakespeare and Company, with comments from his editor, Catherine Nabokov.

In his exchange with Albertine, Faye said that the best book he’s read this year is James Baldwin’s Giovanni’s Room, and that the book he returns to again and again is Notebook of a Return to the Native Land by Aimé Césaire, adding “I am trying to to learn it by heart, as its prose totally overwhelms me.”

The Order of the Day

Éric Vuillard is a writer and filmmaker. He has made two films and written seven books. He won the Prix Goncourt in 2017 for L’Ordre du jour. The Order of the Day in Mark Polizzotti’s translation is published by Penguin Random House (September 2018).

When asked for his exchange with Albertine what the best writing advice he’s had is, Vuillard replied, “That, sometimes, when in the course of writing, a narrative will sink, and a book’s words will begin to ring untrue. Rather than distress myself when this happens, I pick up another book to work on.

“One writes leaning in the direction of an ever-elusive truth; this is why a new book will sometimes help me to understand what I failed to grasp in another.

“Another result is that, as time goes on, I have numerous books to work on at any given time.”

In her Albertine exchange, Slimani is asked which non-literary element of cultural life does she count most important. She answers, “Films. I go to the movie theater nearly every day.

“As a child, I watched a lot of movies. My grandmother was a cinephile as was my father, who adored films from the golden age of Hollywood.

“Film has played an immense role in my passion for fiction, for characters.”

Nathacha Appanah is a native of Mauristius and . Her award-winning novel The Last Brother, has been translated into 16 languages, according to media messaging from Albertine. 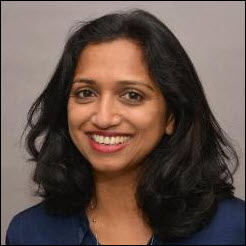 She lives and works in France as a journalist and translator, and Waiting for Tomorrow is translated by Geoffrey Strachen in its edition from Graywolf Press (April 2018).

In preparation for the Albertine Prize voting, Appanah was asked about her experience in working with translators. She answers, “I have been working with Geoffrey Strachan for some years now and feel very lucky. We have an old school way of working, if I may say so. Geoffrey will read my novel and write to me about his general impression and/or feeling, the difficulties he senses, the words or expressions he feels we should discuss.

“I write back (and by this I mean literally writing and posting the letter through this service called the Post Office—maybe with beautiful and strange stamps, because these things do still exist).

“He writes back and we agree on a phone meeting where we talk about the translation. Sometimes we have one or two letters again and some phone calls, if there are still some issues. He is very precise and thoughtful, and I am grateful to have him.”

More from Publishing Perspectives on Albertine and its programming is here. And more from us on translation is here.