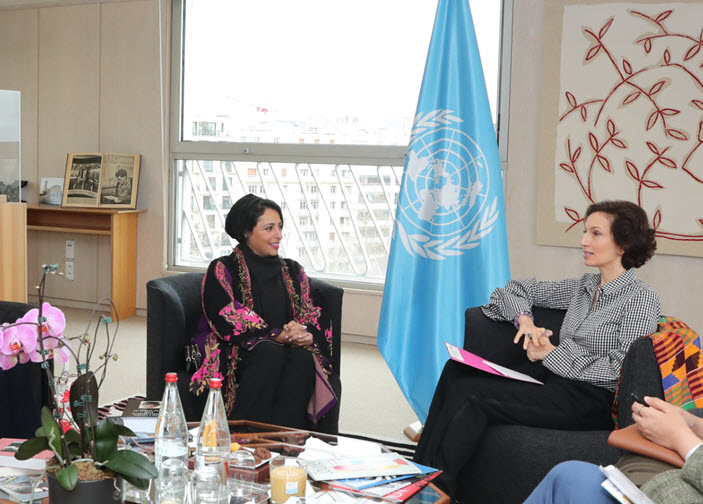 In a working session in Paris, final programming plans have been introduced for the coming UNESCO World Book Capital events, after Sharjah’s Sheikh Al Qasimi launches English translations in London.

In talks with UNESCO’s director-general Audrey Azoulay, Bodour outlined the extensive catalogue of events and activities being put together for the year-long designation by the world agency, including programming during the run-up to the World Book Capital‘s opening ceremonies, such as:

An over-arching slogan for the World Book Capital year in the United Arab Emirates is “Open Books, Open Minds,” and this parallels the connections that Sharjah’s leadership is making between its growing knowledge-based economy and international relations.

“To boost the Emirati and Arab publishing landscape and drive literary creation in our part of the world.”Bodour Al Qasimi

The World Book Capital program itself was originally the suggestion of Pere Vicens, in 1996 the president of the IPA. In 2001, Madrid became the first city to call itself a World Book Capital, and the city now winding down its leadership in the role is Athens. Greece will be handing off to the UAE in April as the Sharjah program opens. To this day, the IPA works in close cooperation with UNESCO on the annual selection of the World Book Capital designation.

“Our aim” this year in Sharjah, Bodour said, “is to ease access to books and education. In doing so, we believe that we can promote cross-cultural dialogue and harmony, as well as build a future generation that is capable of furthering our nation’s vision. The program also aims to boost the Emirati and Arab publishing landscape and drive literary creation in our part of the world.”

Azoulay reportedly is pleased with the Sharjah plan’s creation of new initiatives designed to continue developing long after the World Book Capital year is over and impacting literary and publishing development in the wider Arab world.

Kuala Lumpur has been named to follow Sharjah as World Book Capital. UNESCO has issued its call for applications for the 2021 designee in the program. 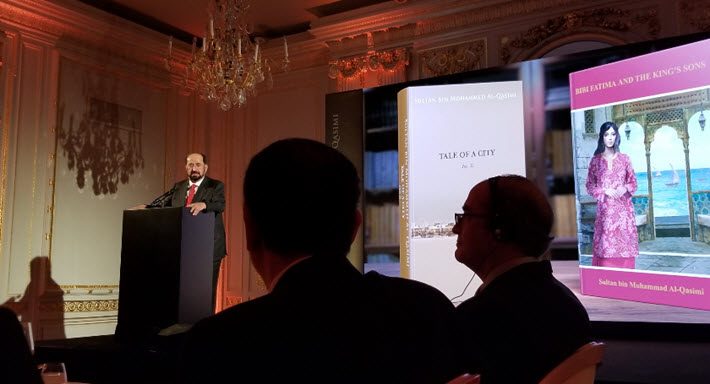 His Highness Sheikh Sultan Bin Al Qasimi speaks (March 11) in London on the release in English translations by Ahmed Ali of two of his books, ‘Tale of a City’ Part II and ‘Bibi Fatima and the King’s Sons.’ Image: Porter Anderson

Bodour pointed out that Sharjah has had “a long history of fruitful cooperation” with UNESCO in the past, and she made the connection between the coming year of intense reading focus to the leadership of Sheikh Sultan Bin Mohammed Al Qasimi. 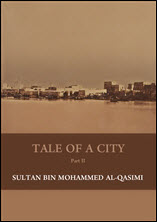 Al Qasimi is the author-ruler whose plan to see Sharjah become a reading culture was recognized in 2017 when he was given the Simon Master Chairman’s Award by the London Book Fair in association with the UK’s Publishers Association. Sheikh Al Qasimi has in the past worked with UNESCO on other initiatives, including conferences on the status of the Arabic language and its use in literature.

During this year’s London Book Fair, Sheikh Al Qasimi hosted a dinner at which his latest books published in English were presented to an international gathering of publishing professionals. Those titles are Bibi Fatima and the King’s Sons and Tale of A City, Part II, both in translation from the Arabic by Ahmed Ali.

Al Qasimi’s prolific writing is published by his own publishing house, Al Qasimi Publications, and the imprint’s list carries more than 40 titles by the emir, in historical, literary, and theatrical writings. In a March 14 announcement about the establishment of the new publishing venture and the Emiri Decree issued to establish it, we read that the house will publish and distribute “various new scientific, literary, cultural publications, promoting the paper-based publications and the electronic publications. It also aims to support humanitarian and charitable institutions.”

Sheikh Al Qasimi met with UNESCO’s Azoulay in December for a briefing on activities around World Arabic Language Day. Arabic was made the sixth official language of the organization in 1973. The event was coupled with a series of UNESCO-hosted round tables on the Arabic language. 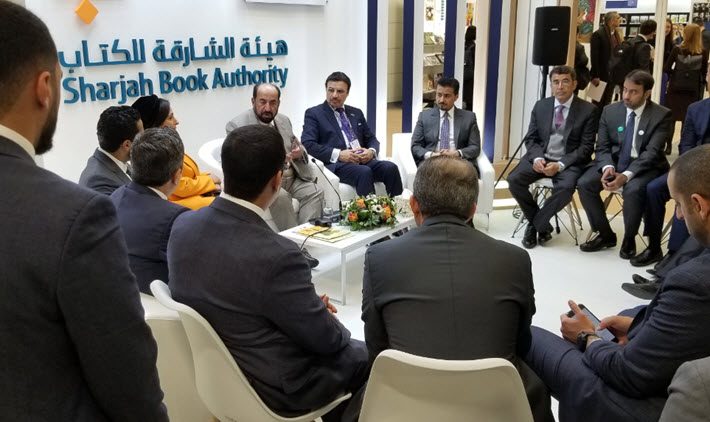 More from Publishing Perspectives on Sharjah is here, more on the UNESCO World Book Capital program is here, and more about London Book Fair is here.