Since the destruction of the University of Mosul’s library, momentum is building for Book Aid International’s efforts to coordinate and enable publishers’ contributions to rebuilding.

Thousands of books on philosophy, law, science, and poetry are said to have been lost in the destruction of the library at the University of Mosul. Image: Book Aid International

Update: Following the publication of our story, Olivia Snaije has spoken with Christopher Kenneally of Copyright Clearance Center’s Beyond the Book podcast about the University of Mosul library. You can hear that program here.

Most news accounts date the main destruction of the University of Mosul library to 2015, following the start of the Islamic State group’s occupation in June 2014. As Robin Wright wrote in her 2017 article in The New Yorker, the library’s collection had included a ninth-century copy of the Qur’an, as many as 600,000 books in Arabic, and more than a million “books, historic maps, and old manuscripts.

As such, the library had been one of the most important in Iraq and the Middle East, a repository of information on the cultures, religions, and ethnicities that make up the region. The destruction of thousands of books, many of them precious, was a tragic addition to the country’s list of tremendous cultural losses in recent years.

Used by up to 40,000 students, the library was, in the words of Alaa Hamdon at the London Book Fair, “an icon for the university, a lighthouse for students and the community, a shining light at the heart of the university.” 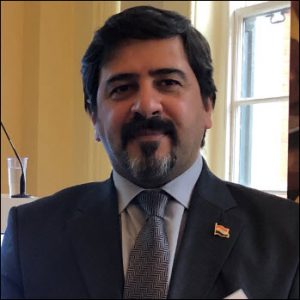 Hamdon is the founder of the Mosul Book Bridge campaign to rebuild the library. He spoke Tuesday (March 12) in “How Publishers Are Bringing Books Back to Mosul” a discussion that featured Alison Tweed, chief executive of Book Aid International; Dr. Mehiyar Kathem, coordinator for the Nahrein Network at University College London; and Rachel Goode, group communications director with Oxford University Press.

The session was moderated by the group development director at Hodder Education, Robert Sulley.

When Mosul was liberated from ISIS in 2017, Dr. Hamdon decided to establish the Mosul Book Bridge effort to rebuild the university’s library, and contacted Book Aid International. The British charity works with more than 100 publishers in the UK and reports sending up to 300,000 books to countries worldwide.

Traditionally, Book Aid’s service area has been mostly in Africa. But Tweed said in the discussion that reports of the deliberate cultural and intellectual destruction in Iraq were so moving that she offered to partner with Hamdon’s Mosul Book Bridge campaign.

“We have infrastructure and logistics,” she said, “and it seemed like a wonderful partnership.” 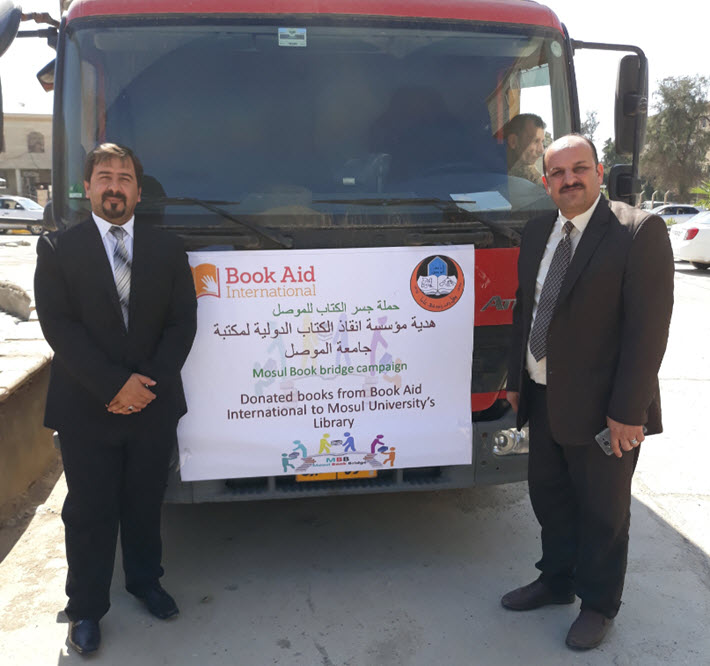 As Publishing Perspectives has reported, Book Aid International has become more involved recently in sending books to transit and refugee camps. They recently sent books to Syria, for example, to support an organization in Idlib.

“Mosul was special,” Tweed said at London Book Fair, “and we like a challenge. We made a selection of books and put them onto trucks. They sat in Bulgaria for a few weeks and then limped across the border. The situation is volatile and ever-changing, but the books got there.”

‘A No-Brainer To Get Involved’ 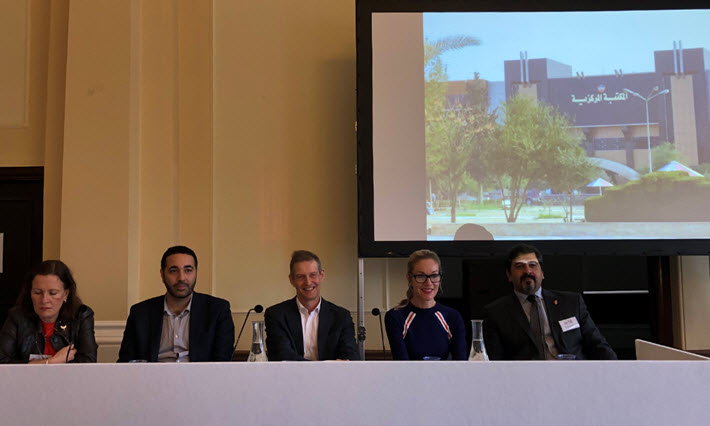 Publishers to which Book Aid appealed for help included Oxford University Press where, Rachel Goode said, “It was a no-brainer to get involved.

“I felt we needed to support these wonderful places of learning that have been destroyed,” she said, adding that she sees the partnership with the University of Mosul through Book Aid as long-term. “Our own colleagues get so excited” about the project. “The benefits have been huge for many of my colleagues around the world.”

What made Book Aid’s coordination and contribution especially valuable was that they delivered new books that the University of Mosul had specifically requested, said Mehiyar Kathem, whose Nahrein Network helps people across the Middle East to “reclaim their ancient heritage as local history, putting it to constructive use for their communities.”

The Nahrein program offers grants and is partnered with the Mosul Book Bridge.

“I visited Mosul in January,” Kathem said. “I’d like to stress how important it is to have the physical books there because the Internet doesn’t work well. These are brand-new important books, because you also have out-of-date books donated, like a book on electronics from the 1980s.”

Logistically, the effort has been complicated and costly, Tweed said.

Her organization started by sending six pallets of books to Iraq. Their usual shipment to African countries is 20 pallets, which costs them £1,500. The Mosul shipment cost Book Aid twice that amount.

Their first donation was significant for the University of Mosul because they were starting from zero. “For us it was a small donation,” however, Tweed said. “It was difficult because there was lots of paperwork. We were sending the books overland and had to figure out how that worked. And there was unrest in Kurdistan that flared up,”

Tweed said, “We are small players and it’s a big project.” The library was destroyed quickly and yet will be rebuilt only slowly. “What we’re hoping is to create a long-term partnership,” she said. “We’ve just signed a five-year partnership. We want to send 50,000 books to Mosul over several years.”

A second shipment of 5,000 books for the university library will be departing imminently, Tweed said, and she encouraged the publishing community, especially higher-education presses, to get in touch with Book Aid to assist.

Hamdon said that rebuilding the library can help “give hope to everyone living there, that culture is back. People will feel reassured about their education and their future.”

The lost library at Mosul was “an icon for the university, a lighthouse for students and the community, a shining light at the heart of the university.”Alaa Hamdon, Mosul Book Bridge

He spoke of moving forward and creating more partnerships with libraries and institutions, and said he’d like to get donations from Arabic-language publishers.

Hamdon told Publishing Perspectives that before it was destroyed, the large majority of the books in the library were in Arabic, with “sections of books in English, French, Italian, Portuguese, Kurdish, and Turkmen.”

The majority of the books in the library are now in English, according to Hamdon. In hopes of donations of Arabic-language books, he said he has contacted organizations in the United Arab Emirates and in Egypt, and has written to Omar Mohammed, the historian who blogged anonymously about the city’s occupation at the Mosul Eye site, starting a campaign for book donations.

Hamdon said he’s had donations from other university libraries in Iraq. “Personally, I welcome any idea, any partnership. As long as it leads to something.”

More from Publishing Perspectives on the work of Book Aid International is here, and more on this week’s London Book Fair is here.

Our Spring Magazine is ready for your free download here at the site, and at the London Book Fair you’ll find the print edition available, also free of charge.