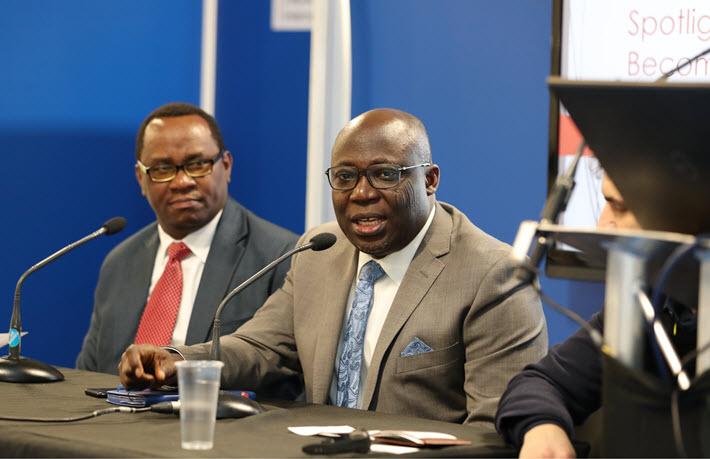 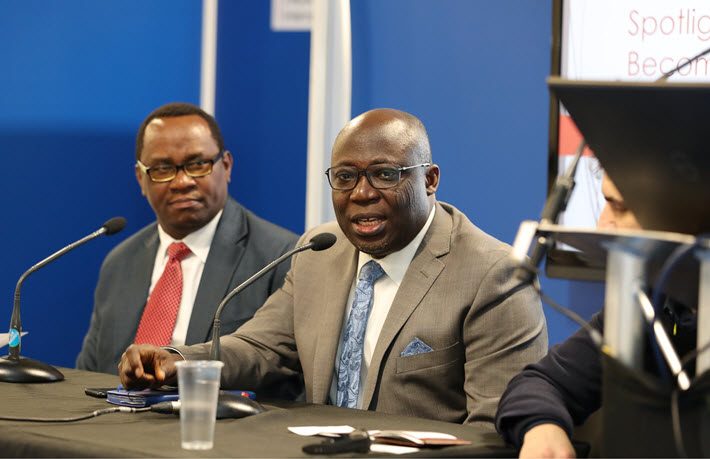 The International Publishers Association‘s (IPA) June seminar in Nairobi is being devised as a two-day examination of challenges and opportunities in African publishing and its accelerating presence on the world stage.

Readers of Publishing Perspectives will recall that last year’s first IPA Africa seminar was staged in Lagos in cooperation with the Nigerian Publishers Association.

Adepapo, CEO of Rasmed Publications, is also an executive committee member of the IPA, and has been an outspoken champion for eradicating formidable levels of piracy in parts of Africa’s publishing markets. In fact, the second of the first day’s panel debates on the first day of the conference in June will look at “Copyright Protection and the Threat of Piracy,” getting quickly to the stubborn and sometimes ruinous means of near-institutionalized book and textbook piracy in some markets.

The program, however, as Njagi’s and Adepapo’s comments indicated in London, is a broad one, exploring current conditions and potentials in educational and commercial publishing, readership and data development, industry disruption and even the alarming rate at which some of the African continent’s roughly 3,000 languages are disappearing.

The event is titled “Africa Rising: Realizing Africa’s Potential as a Global Publishing Leader in the 21st Century.” Once opened on the 14th of June by IPA president Hugo Setzer and Kenya’s Njagi, a welcome to the assembly will be made by Ngũgĩ wa Thiong’o, the award-winning author who now is a professor in English and comparative literature at the University of California Irvine.

As in the case of last year’s seminar in Lagos, leadership in designing the program has been taken by the United Arab Emirates’ Bodour Al Qasimi of Sharjah, the vice-president of the IPA. She will be joined in speaking by IPA’s Freedom to Publish committee chief Kristenn Einarsson of Norway and by the UK’s Gersy Ifeanyi Ejimofo, who is the founder of DigitalBack Books, an online library platform for literature from Africa and its diaspora.

Programming Elements: ‘To Transform the Future’

The prospectus for the 2019 Africa Seminar program of the International Publishers Association, distributed at the London Book Fair

A part of the programming on the second day of the event is to include an update on the “Lagos Action Plan” that was established at last year’s event by an eight-member working group.

A fireside chat will feature the World Intellectual Property Organization’s (WIPO) Sylvie Forbin and Marisella Ouma, formerly the executive director of the Kenya Copyright Board. That session is followed by an extensive copyright workshop.

The IPA is also concretizing its commitment to its still relatively new African outreach. Begun with the 2018 Lagos event, the program is being positioned as a series devoted to “transforming the future of Africa publishing.” The mission is big, and ambitious.

“In just one year,” according to the IPA’s media messaging, “the Africa seminar series has evolved into a continent-wide, multi-sectoral platform for creative thinking, collaboration, and action to shape the future of African publishing.

“What differentiates the seminar series is its focus on near-term impact. This focus on moving from words to action is captured in seminar-specific action plans which gain consensus on key industry challenges and identify scalable pilot projects as possible solutions.”

And those just starting to look at the program’s development may be surprised at some of the elements of the attributes of the vast construct of African markets and what they offer.

“Africa’s youth bulge” in the demographic charts “can be catalyst for the future of African publishing and accelerated social and economic development,” the IPA’s outlook has it.

While as many as 600 attendees from some 50 countries are anticipated to participate, the IPA currently is helping to lead the drive for registration particularly by members of the publishing communities and creative industries of Africa.

In its prospectus on the event, the IPA’s outline of the agenda for the program includes these sessions: