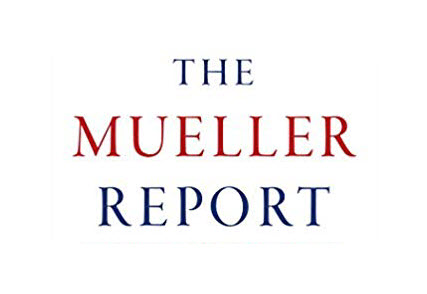 A  book that, as yet, has nothing between its covers is already a market leader in nonfiction: Amazon cites the Skyhorse edition of the Special Counsel’s report a bestseller in three categories. 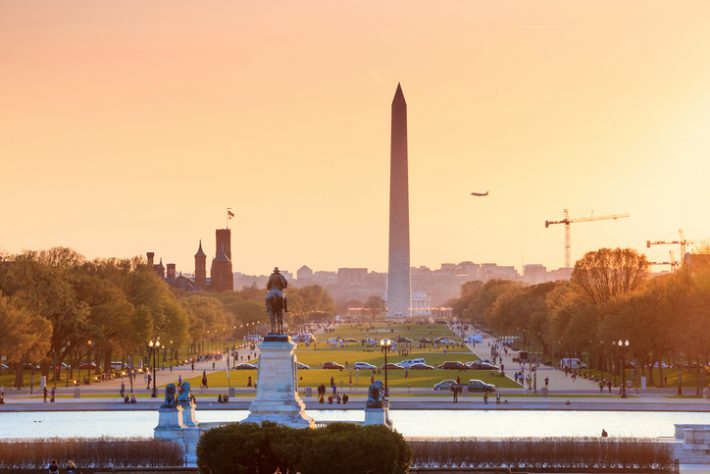 The Placeholders Are Ready

American politicians on the left are demanding a quick release of the full report from Special Counsel Robert Mueller on his probe into allegations of potential conspiracy and obstruction of justice related to the 2016 election of Donald Trump. Their counterparts on the right seem comparatively satisfied with Attorney General William Barr’s four-page memo on the report.

Simon & Schuster appears poised to respond to what may be sharp consumer interest, if and when the report is released, with placeholder book listings on Amazon.

We don’t even know as yet how many pages are in the Mueller report. Congressional leaders say they’re prepared to fire off subpoenas, if necessary, to get the actual report—not a political appointee’s memo about it—by Tuesday (April 2).

As The New Yorker’s Susan Glasser has summed up the fray, “No one except Barr and a small handful of his aides has read the Mueller report. Trump has overreached in his victory statement. Democrats are demanding the release of the report before accepting its conclusions. Serious allegations about the president’s alleged obstruction of justice remain. An epic fight over what Congress can see of Mueller’s work is all but inevitable. The country is divided. And we still have no idea why Donald Trump seems to like Vladimir Putin so much.” 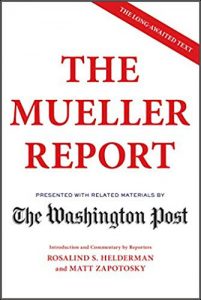 This Simon & Schuster/Scribner listing runs to an anticipated 720 pages and promises to include “exclusive analysis by the Pulitzer Prize-winning staff of The Washington Post.” The preliminary cover for this edition lists “introduction and commentary” by reporters Rosalind S. Helderman and Matt Zapotosky—who, of course, haven’t yet see the report, either, unless they’re moonlighting as aides to Bill Barr.

For Washington-weary citizens, a possibly commiserative banner on the cover of that one reads, “The Long-Awaited Text.”

This Simon & Schuster/Skyhorse listing, by contrast, announces that the book has 640 pages and will be released April 30. Amazon’s Kindle placeholder edition lists its release date as May 14. 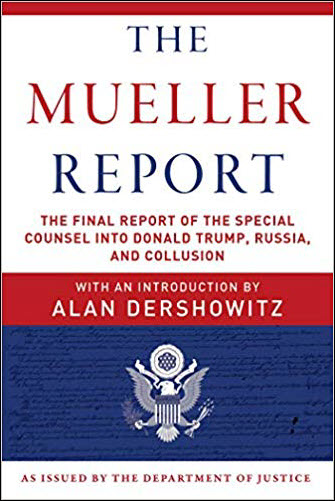 It’s to have an introduction by Harvard’s Alan Dershowitz.

With pre-orders available (as on all these listings) at Amazon, this edition is listed by the retailer as a No. 1 bestseller already in the categories of Federal Jurisdiction Law, Communication and Media Studies, and Civics and Citizenship.

If you need a quick understanding of why such placeholders need to be filled expeditiously with the actual Mueller report, you’ll find that author and attorney Scott Turow, a former Authors Guild president, needs only seven paragraphs at Vanity Fair to issue his opinion that the attorney general’s reasoning in his memo “represents a troubling effort to paper over the acknowledged evidence that Mr. Trump committed a crime in public view.” 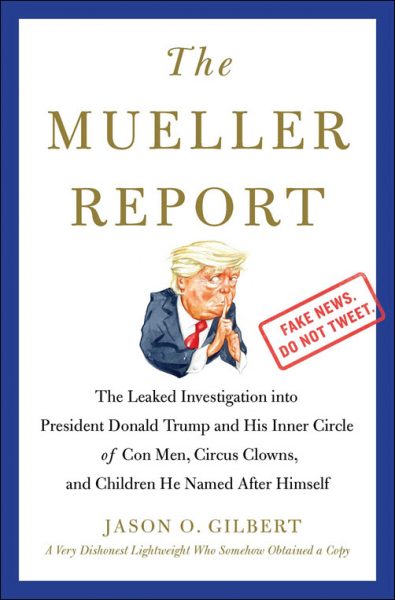 If, instead, you need a good laugh, there’s yet another evocation from Simon & Schuster, Jason O. Gilbert’s parody, The Mueller Report: The Leaked Investigation Into President Donald Trump and His Inner Circle of Con Men, Circus Clowns, and Children He Named After Himself.

This one has been out since September and includes in its blurb material, “Unlike the Trump presidency, The Mueller Report is so much fun you won’t want it to end. Read it right away, while books are still legal in America!”

Audible, meanwhile, appears to stand ready to shove a long-winded narrator, or several, into a tracking booth to record the audiobook edition—perhaps more than one edition, from the cover designs, plural—again with that theoretical April 30 release date. 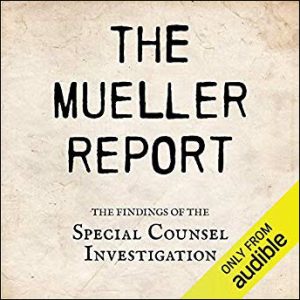 Here’s one that will be “released shortly after the document is made available by an official or sanctioned entity.”

Another, the Scribner audiobook edition, has a regular price of $28.34 and is to run 29 hours—another time factor unknowable at this point.

It’s on that one that we see the danger of having the same advertising copy on every product: “Your audiobook is waiting,” says Audible’s marketing copy on the page, pictured below.

Actually, no, your audiobook of the Mueller report is not waiting. Not yet. That’s the problem. Just ask the House Judiciary Committee. 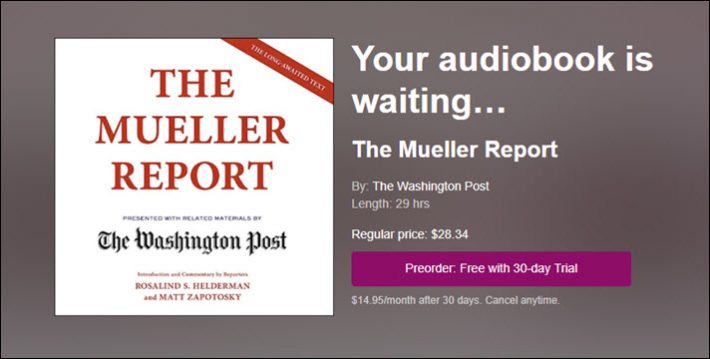 We’re reminded by the offices of the British Academy’s nonfiction Nayef Al-Rodhan Prize that the program’s deadline for submissions is Monday (April 1).

Details of this £25,000 (US$32,887) award are in our announcement of the prize’s opening this year at the Jaipur Festival in India. That coverage is here.

Authors may be of any nationality, based anywhere in the world, and working in any language provided that the nominated work is available in the English language.

This is the prize founded and sponsored by Nayef Al-Rodhan, the international relations specialist and neuroscientist. It was first awarded in 2013, and it recognizes “an outstanding contribution to global cultural understanding that illuminates the interconnections and divisions that shape cultural identity worldwide”–of particular pertinence, it would seem, in today’s politically charged international book markets.

More from Publishing Perspectives on political books is here, more on nonfiction is here, and more on publishing awards is here.  More from our Industry notes series is here.