Never in the 40-year history of NORLA, the Norwegian Literature Abroad program, have so many titles been granted translation support, according to Margit Walsø, the organization’s director.

And figures from the Norwegian literature agencies show that the total number of foreign rights sold abroad in 2018 is close to 1,000 titles.

“We wanted to use the guest of honor position at the Frankfurter Buchmesse to promote Norwegian voices globally, and the English-speaking market is very important, not least as a door-opener.”

After English, Walsø says, the largest concentrations of translation grants from her agency in the last year have gone to render Norwegian books into:

All told, in 2018, NORLA granted support for the translation of 639 books by Norwegian authors into 45 languages–the biggest such year yet for Norwegian literature.

And the timing couldn’t be better as Norway’s publishing and books community prepares for its guest of honor year at the Frankfurter Buchmesse (October 16 to 20). You can find a list of programmed events in the guest of honor plan here.

And if you think the key draw has to do with crime in snowy places, think again: “The international interest in stories from Norway seems to go far beyond Nordic Noir,” Walsø says.

“As many as 270 different authors are among the translations, and the biggest increase is seen in nonfiction and children’s books, although adult fiction titles make up the highest number of translations.

“The quality of all genres—narrative nonfiction, fiction, and children’s books from Norway—provides us with books characterized by diversity.”

In terms of going into its guest of honor year with such a strong wind at its back, Walsø says, “We’re very pleased to see the Norwegian literary agents and book industry making the most of their international opportunities.

“We’re happy about our fruitful cooperation with agents and publishers, in addition to the outstanding work carried out by the translators of Norwegian literature.”

A total of 80 German-language publications of Norwegian titles received support in 2018. That was a record for the number of translations supported in a single language. 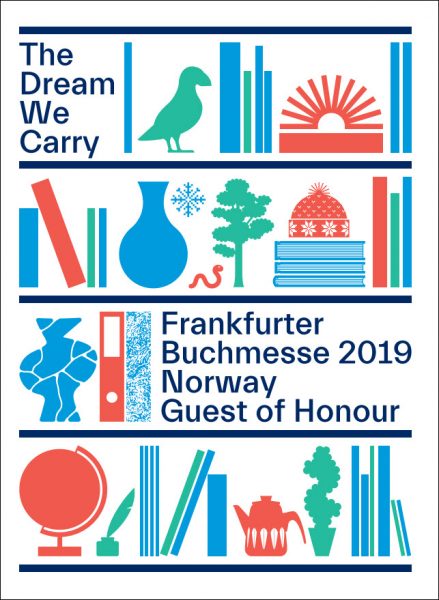 “We look forward to going to the London Book Fair this year,” Walsø says,  “to present more Norwegian titles with international potential.

“Our program will also include a presentation at the Free Word Centre on Monday (March 11) before the book fair starts, with the five authors taking part in our New Voices program this spring,”

That program, she says, is a cooperation between Talent Norway, The Norwegian Publishers Association, and NORLA.

Walsø’s team  say they’re seeing a high rate of German translation, which reflects the coming guest of honor programming at the Frankfurter Buchmesse, amplified by a specific effort on the part of literary agents and the Norwegian industry to raise their level of outreach.

While some 70 German and Austrian publishers have visited Norway and become acquainted with the Norwegian book industry, NORLA has developed the Web portal Books from Norway, to increase the support for German and English translations and make Norwegian authors and books visible internationally.

A united Norwegian book industry has invested heavily in network-building and rights sales in the build-up to the guest of honor year, and some sample rights lists include:

The Three Most Translated Norwegian Authors in 2018

The Most Translated Norwegian Authors in 2018 in Specific Genres

And with this week’s events in London in mind, Walsø adds, “Through BooksFromNorway.com, we’re pleased to offer information in English on a wide range of Norwegian titles in all genres.

“At the moment, the portal has more than 1,400 titles and the number is growing day by day.

“Also, we’re cooperating with IPR License on making the titles in Books from Norway available on the IPR platform,” for international online rights transactions, “and this enables us to reach an even bigger professional audience worldwide.

“We’re looking forward to intensifying this cooperation in the months to come.”

More from Publishing Perspectives on Norway is here, on translation is here, and on IPR License is here.