Ask Juergen Boos what he and his fellow international trade-show and book-fair directors have in common and he’ll tell you it’s what they don’t have in common that counts: ‘It’s always moving.’

‘Get One Market To Look Into Another’

As world book publishing’s 2019 conference and trade show season moves into high gear, the international industry’s players are traveling to and from the key events in a pattern that becomes familiar. With the London Book Fair as the first major anchor of the year and the Frankfurter Buchmesse as the culminating event, many this week are preparing for the Bologna Children’s Book Fair (April 1 to 4), and others have just returned from the Leipzig Book Fair.

Trade visitors at these international and regional events can number in the tens of thousands. In cases of public-facing events, hundreds of thousands may be in attendance.

And yet a far smaller group of directors are behind the most stable of the world’s great book industry events. You see them at each other’s venues regularly. For example, India’s Jaipur Festival featured a first visit from the Frankfurter Buchmesse’s Juergen Boos. And the London Book Fair’s Jacks Thomas is a regular guest at the United Arab Emirates’ Sharjah International Book Fair.

When Publishing Perspectives spoke with Thomas earlier this month ahead of this year’s trade show at Olympia London, one of the key points she made about the position of a major fair director had to do with the strain of Brexit and its deep uncertainties for the UK and European publishing industries. A trade show’s director, she said, of course cannot take a political position. “What you can do,” however, Thomas said, “is be very cognizant of the context in which we’re operating.” And to that end, the fair this year had plenty of cross-cultural programming, reflecting, as she put it, “what books do.”

During the London Book Fair, Boos—a former publisher at Herder, Doremer Knaur, and Carl Hanser Verlag and Frankfurt’s CEO since 2005—was a constant presence, meeting with industry players at the “German Stories” collective stand, participating in programming as a member of the Sheikh Zayed Book Award‘s scientific committee, and observing how Great Britain’s big book fair was operating, months before his own event.

Frankfurt is annually the world’s largest such trade event for the business, this year set for October 16 to 20.

The Frankfurter Buchmesse’s points of emphasis this year include:

‘Everybody Has His Own Focus’ 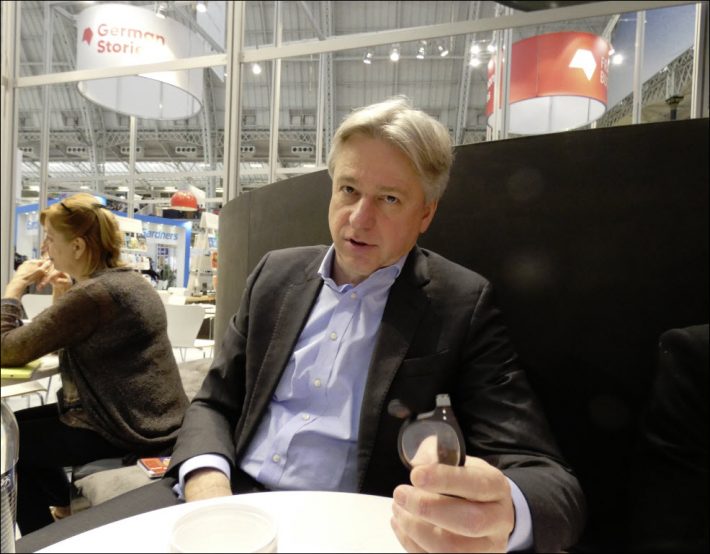 In a conversation with Publishing Perspectives during the London Book Fair about the view from his vantage point as one of the handful of major show directors in the world, Boos says that he and his colleagues who direct the international industry’s major fairs and festivals “do meet every second year, maybe 20 of us,” and of course they see each other in transit on planes, trains, and on the exhibition floors of the world.

“In the world’s book fairs, everybody has his own crisis.”Juergen Boos

“The last time we met,” he says, “was in Göteborg,” which has its annual fair near the end of September. “The first thing we usually do is talk about our markets and our perceptions,” Boos says. It was at Göteborg Book Fair two years ago that one of Boos’ fair-director colleagues became a career casualty of a protest over the presence of a hard-right exhibitor. Maria Kaällsson would resign after the fair, and some of the controversy has persisted.

But while the layperson’s expectation might be that the world’s book fair directors have much in common to share about their respective regions and businesses, “Really everybody has his own focus,” Boos says. “Each fair has its own USP, unique selling proposition, its own markets, its own challenges,” which may not, in fact, have as much overlap as might be expected with these events in other parts of the world.

“If you look at Buenos Aires, for example,” Boos says, “there are hundreds of thousands of people coming” to the Feria del Libro. “It’s such an unstable country economically but the fair is so successful. We all have our different challenges.

“Frankfurt might be a bit different, in that we have so many tasks at the same time,” he says. “We run the show, we promote German culture abroad. Like the French, who have the book fair but have to reach out to the world at the same time.” This year, that meant back-to-back fairs in England, Livre Paris opening the day after the London Book Fair closed: the ambassadorial element of the fairs’ activities can be among the most intensive parts of a director’s work.

“At Frankfurt, we also do a lot of consulting and we do a lot of conferences worldwide, which I think nobody else does,” in events from CONTEC Mexico to StoryDrive China in Beijing and Singapore’s StoryDrive Asia. “So everybody has his or her own perspective.”

The Buchmesse focus, for example, he says, is very much on his fair’s unusually broad range of constituencies served in the space of a week, let alone during the year-long outreach events the company produces.

Listening for a moment to the conversations passing the stand, Boos delivers one of his best lines in characteristic deadpan: “In the world’s book fairs, everybody has his own crisis.”

As Böhne chuckles at this, he says, “Look, London has Brexit”—which to the moment of this writing almost two weeks later is even deeper in political paralysis. Theresa May now is bargaining with her own resignation, as Megan Specia reports for The New York Times, in a last-ditch bid to leverage the British Parliament. “And you’re talking about Trump” in the United States, Boos says.

“So we’re a group of people,” he says, a small cadre of professionals who travel heavily for work, and on the surface might appear similar “but we’re multi-nationals.” This means there’s a higher perspective on distinctive issues and challenges than might be as easily perceived at ground level in any one market.

“A literary publisher in the UK,” for example, Boos says, will see something quite different from what a fair director based in Germany is tracking. There, “We want to export our Germany titles, and yet we do see a lot of reading English in Germany.

“And our LitAg,” the international rights center at the Frankfurter Buchmesse, the heart of the world’s transactional licensing business, “is already booked out for this year,” Boos says, with Böhne’s confirmation—a complete sellout almost eight months before the fair, and with a move this year to the Festhalle from Hall 6.3 as part of the renovation program “to give our agents and scouts the best possible infrastructure and experience.”

Böhne, gauging the drive behind the LitAg’s fast sale of its more than 500 tables, says, “What’s beautiful from this perspective” of a world-traveling show director like Boos, “is that you can see that the industry is alive and kicking in various places.”

‘Tell Them All There Is Hope’

Boos’ message is that while each of the world’s major book fair directors is based in a specific local construct, the aggregate outlook they get in seeing so many points of the industry’s operation is positive.

“Our task is to get one market to look into another market and see what it is that has been done to make one successful while another isn’t.”Katja Böhne

“Look at Spain,” he says, “which lost like 5o percent, 60 percent of its revenues” during the depths of the European financial crisis, “and now they have recovered not all of it but quite a lot. And look at the Russian book market, a huge country but only now they’re starting to read more because there’s more income” to buy books.

“In Brazil, there’s the bankruptcy protection filings by two [bookselling] chains, but you see the independent bookstores doing  well. And look at Indonesia,” the London Book Fair’s Market Focus, “and at Vietnam. And at growth in the Middle East, just talk to Bodour” Al Qasimi, the Emirates Publishers Association president who has become vice-president of the International Publishers Association.

“It’s always shifting, it’s always moving,” he says. And over an expanse of time, the trade shows play a kind of historical and reflective documentation role, as with last year’s “On the Same Page” support campaign at the Frankfurter Buchmesse for the 70th anniversary of the United Nations’ Declaration of Human Rights, timely in a world wracked by threatening political upheavals.

“This is why our task,” Böhne says, “is to get one market to look into another market and see what it is that has been done to make one successful while another isn’t. At Frankfurt, the most international [of the trade shows], we can encourage people to talk to each other, not only during the day but also during the evenings” and exchange understandings about what responses are working to various pressures.

She points out that at the end of each year’s Buchmesse in October, the talking points and issues she knew would play key roles in the fair have been coupled with new challenges, topics, and issues that arose during the fair itself. “These are unexpected topics you discuss at book fairs, ones you’ve never talked about, new topics to take to the next year.

“Our task,” Katja Böhne says, “is to combine these inputs from these markets to tell them all …”

Juergen Boos picks up her thought, “To tell them all there is hope.”

More from Publishing Perspectives on the Frankfurter Buchmesse is here, and more on the London Book Fair is here.