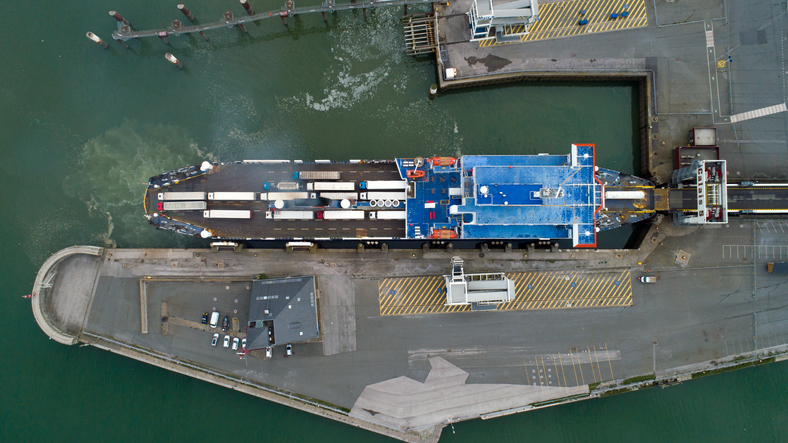 As France’s publishing export organization struggled to get its collective stand and books to London in time, the UK’s French Institute planned more shows of solidarité in the British capital. 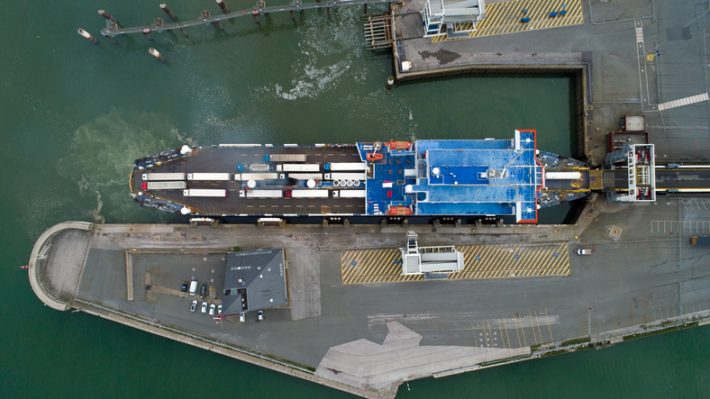 An aerial view of trucks on a freight ferry at France’s port of Calais. Image – iStockphoto: Altitude Drone

Atangible effect of the looming March 29 Brexit deadline has been experienced this weekend by the Bureau international de l’édition française (BIEF), which manages the transport of France’s collective stand to and from the London Book Fair, which opens Tuesday (March 12).

The BIEF has a 400-square-meter stand—the biggest of the international collective stands, according to BIEF managing director Nicolas Roche—and 2,500 books to set up.

But the stand and the books were stuck in Calais until Friday (March 8). “The trucks with the stand finally got through more than 24 hours late,” Roche told Publishing Perspectives on Friday afternoon.

Roche said he was praying that the books would make it to London by Friday night, adding that so large a stand “doesn’t set itself up on its own.”

Update: On Sunday evening, Roche notified Publishing Perspectives that the books for the stand had arrived. “Fortunately we have a super team,” he said, “and we are about to catch up.”

So it is that while much of Brexit’s toll on the book publishing industry to date has been a matter of supposition and deep uncertainty about what to expect, the BIEF staff found itself trying to manage the real and present logistical impact caused by rising alarm around shipping and transit. 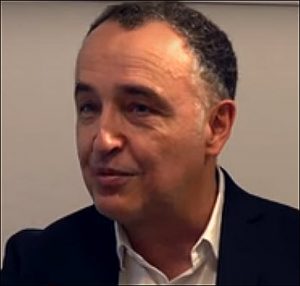 As Richard Lough and Simon Carraud of Reuters have reported (carried here by The New York Times), “French customs workers began their protest on Monday at the northern ports of Calais and Dunkirk, where long lines of trucks built up as customs workers ran extensive checks.”

What’s more, train service between Paris and London has also been disrupted, with customs officials slowing security checks to highlight, as Reuters describes it, “the pressure Britain’s departure from the European Union could place on their workforce.”

This may have affected the ability of publishing professionals from the Continent to attend the London Book Fair if they’d planned to travel by rail.

The Eurostar rail service, which operates between St. Pancras in London and Paris’ Gare du Nord, sent an alert to ticketholders Saturday (March 9), warning them of problems anticipated for Sunday (March 10):

“Hello. All Eurostar trains are experiencing delays of up to two hours from Paris Gare du Nord and Lille Europe tomorrow (Sunday, March 10) due to industrial action by French customs.

“We recommend not to travel unless absolutely necessary.

“You can change your ticket free of charge to a future date, or claim a full refund here http://bit.ly/eurostardisruption_hub. We’re sorry for any impact this may have on your plans. —The Eurostar Team”

As Publishing Perspectives reported in July, the UK’s Publishers Association’s “yearbook” analysis showed that exports accounted in 2017 for 60 percent of the British book industry’s revenues.

And Europe accounted for 36 percent of 2017’s exports’ value. 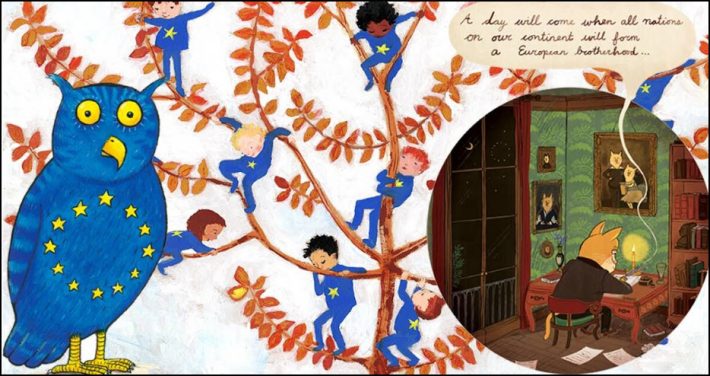 European Union-related artwork for the French Institute by, from left, illustrators Axel Scheffler, Bridget Marzo, and Tor Freeman. The text you see in Freeman’s work on the right reads, “A day will come when all nations on our continent will form a European brotherhood.”

So Brexit is expected to be a prime subject of conversation at the French Institute’s traditional and well-attended “French party” on Tuesday evening, the first night of the London Book Fair. 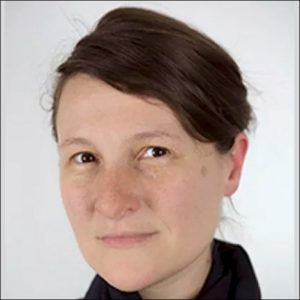 “We usually make sure plenty of networking goes on between British and French publishers,” says Lucie Campos, the director of the institute’s book office who announces upcoming events during the party—such as the organization’s program for European writers and translators’ events in the UK.

This is, Campos says, “a very unusual year. We’re not going ahead in our normal manner, we’re in a holding pattern. There’s no commitment to long-term projects … We have to reinvent how we work together.

“But we’ve all been reminded that the sorts of things we work on make our cross-cultural events and our partnerships seem very meaningful … Where we will go on March 29th,” if that holds as the date for the UK’s departure from the European Union? “We’ll be holding drinks again, this time at the French Institute.”

Campos is referring to an event that dates back to the start of the UK’s political ordeal. When the results of the Brexit referendum were announced in June 2016, the French Institute’s book office in London sent out a message to the people it works with on a regular basis suggesting a drink at Waterstones Piccadilly. “Four hundred people showed up to show solidarity,” says Campos, now in her fourth year after five years on the job.

“It will be very interesting to see how things play out at the book fair this year,” says Campos,  adding that visas for international writers attending UK festivals are becoming more complicated, a topic which will also be discussed at the London Book Fair.

The French Institute in London

Located in London’s South Kensington, the nucleus of the city’s French community, the institute and its book office hold year-round cultural events, and in 2019, led by her institute, “Twenty cultural institutes have organized bringing over writers to the UK with the Brexit context in mind,” says Campos.

“We’ve all been reminded that the sorts of things we work on make our cross-cultural events and our partnerships seem very meaningful.”Lucie Campos

A series of events will be held from May through November at The British Library, next at the National Centre for Writing in Norwich, and then at regional festivals, with the program returning to London during the autumn.

“The events will involve translated writers with lots of committed partners,” said Campos. “Either they’re seeking to develop international audiences or to send a message that whatever happens in the political field it’s important to go on working with international writers. The French institute is very involved. We work in the field of translation in general.”

At the French party, Campos will also be announcing details of the 2019 Beyond Words festival, which she launched in 2017. Held in May, “It’s an exciting festival,” she says, “because it follows the publishing calendar.” Beyond Words brings together French-language authors who have recently been translated in the UK to meet with English-language authors who have a bond with France. 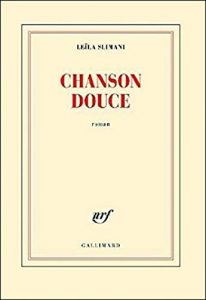 “In addition to the connections between British and French publishers,” Campos says, “we help promote the books that have been translated. We work closely with the translators who know their British audience.”

Campos says the book office used to be primarily geared toward promoting French writers, but during her tenure she has oriented events toward “highlighting the two worlds at their strongest points.”

Topics of discussion about a translated book can vary, depending on which country they take place in. For example, says Campos, when Leila Slimani’s award-winning Chanson Douce appeared in English as Lullaby, translated by Sam Taylor, “There was a whole new discussion about her work in the UK that was different from the one in France.” 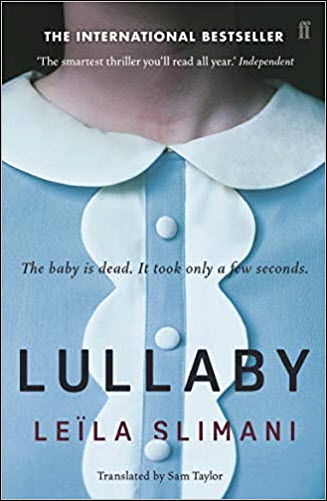 In June, the book office and the BIEF will organize two days of meetings in London with French and British rights managers and publishers involved in children’s books and comics and/or graphic novels “to strengthen ties and to get to know the newer faces,” says Roche.

These meetings will come on the heels of a trip to the Bologna Children’s Book Fair organized by author and translator Daniel Hahn who will lead a group of 10 young British publishers who wish to produce works in translation but haven’t yet done so. Campos says she hopes the June meetings will bolster ties forged at the Bologna fair.

Campos says she’d like to organize another round of Triangular Talks such as the encounter held just before the 2017 London Book Fair. That event brought together French, British, and German publishers and editors who exchanged information on their work and the sorts of books they were looking to publish.

“British publishers need to know who the dynamic young editors in the French and German publishing companies are, and our added value is bringing them together.”

Nearby on the Calendar: London’s and Paris’ Fairs

Adding to the drama of a looming Brexit is a timing crunch for French publishing professionals and guests invited to  Livre Paris, the book fair in the French capital, which begins March 15, with its pre-fair events on the 14th, the day the London Book Fair ends this year.

Amusingly, the guest of honor at Livre Paris this year is the European continent, rather than a single country. The fact that the two book fairs, both managed by Reed Exhibitions, are back-to-back has meant that the BIEF and other organizations have had to scramble to rearrange the two days of professional meetings organized for the Livre Paris’ guests of honor. These meetings are usually held before the fair.

When asked about the proximity between the London and Paris fairs, a spokesperson for the London Book Fair said that flexibility for the dates in London were limited, making March 12 to 14 the only viable option.

More from Publishing Perspectives on Brexit  and the book busines is here, and more from us on the London Book Fair is here.

Our new Spring Magazine is ready for your free download ahead of the London Book Fair—where you’ll find the print edition available, also free of charge.