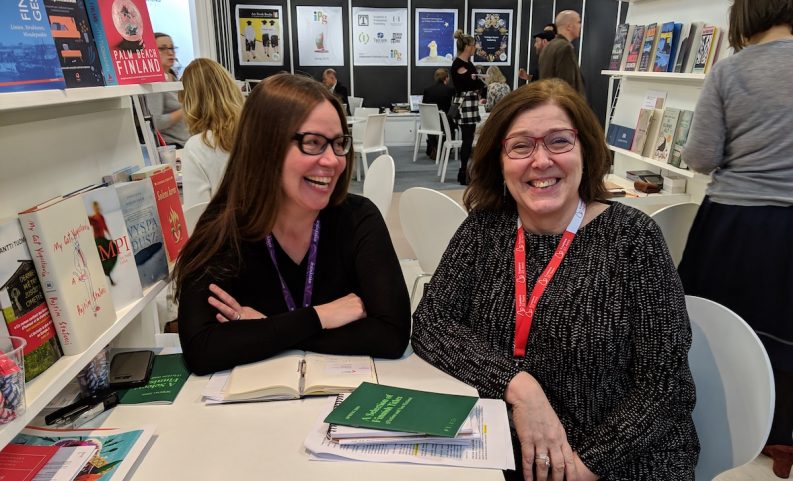 Five years after Finland was Guest of Honor in Frankfurt, FILI has a series of events planned this year to keep up the momentum and ‘build a structure for the future.’ 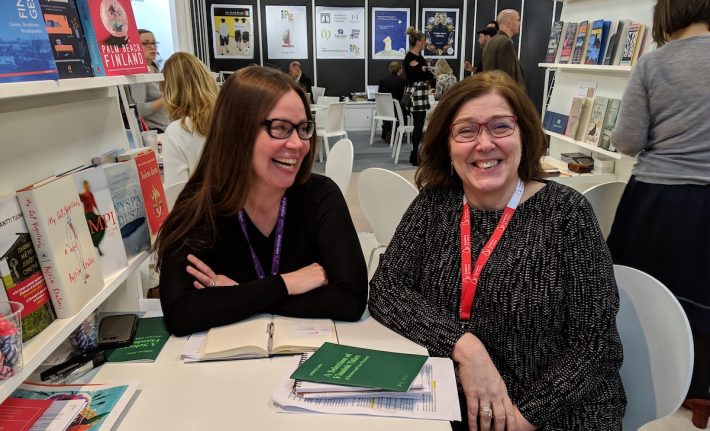 ‘What Happens When We Work Together’

It’s been five years since Finland was in the spotlight as the Frankfurter Buchmesse’s Guest of Honor in 2014 under the slogan “Finnland. Cool.” This year, the organization behind this enormous project—FILI, Finnish Literature Exchange—is launching a series of events and outreach efforts under a new slogan to celebrate this five-year anniversary.

“You put a lot of effort into it,” FILI director Tiia Strandén told Publishing Perspectives during last week’s London Book Fair, referring to the multi-year process of organizing the program for Frankfurt. Now, five years later, she said, “We want to remind people to keep it going.”

One of the most concrete outcomes of being a guest of honor in Frankfurt, Strandén said, has been an increase in the number of Finnish titles translated into other languages. According to FILI’s data, revenue from the export of Finnish literature has doubled since 2011, which is “proof that the effort was worth it,” said Strandén.

Another, less tangible but no less valuable outcome was that the guest of honor project “brought the Finnish publishing industry together,” said Strandén. “We were united in this effort.” It showed publishers and agents “what happens when we work together.”

In that spirit of cooperation, Strandén said that she consulted with Margit Walsø of NORLA—the organizers of Guest of Honor Norway program this year for Frankfurt—to make sure that FILI’s plans are complementary with Norway’s turn in the spotlight.

Strandén said they agreed they’d “together think of a structure” in terms of “what will be the follow-up” to their respective guest of honor years. “The more you share, the more you get back,” she said.

A New Slogan for a ‘Happy’ Year 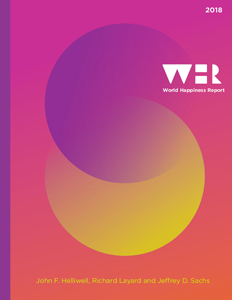 Inspired by by the United Nations’ 2018 World Happiness Report—which named Finland as the happiest country in the world—FILI has come up with the slogan “Finnland. Cool and Happy.” to celebrate the fifth anniversary of the Finland’s Guest of Honor program. (Update: the 2019 World Happiness Report, released on March 20, again put Finland in the top spot as the happiest country.)

FILI is working on a logo to go along with the slogan, said Strandén, and it will be revealed this spring.

Strandén and her colleague, Päivi Haarala—international projects manager at FILI—said they attribute at least part of this happiness factor to the quality of Finland’s education system, income equality, high literacy rate, and, of course, the quality of Finnish books and literature.

By uniting the anniversary events under this campaign, said Strandén, FILI intends to explore “how much of this [happiness] you can see in the literature,” and how Finland’s book industry can rekindle some of the momentum from 2014.

Strandén and Haarala said that FILI’s goals for the new campaign include boosting the number of Finnish publishers coming to the Frankfurter Buchmesse—which are still above the pre-guest of honor level but not as high as in 2014. They also want to examine the medium- and long-term impact of being guest of honor and work with other countries like Norway to “build a good structure for the future,” said Strandén.

Anniversary Events in the Works

As part of the anniversary initiative, Strandén and Haarala said they’ve already planned and confirmed several events to take place in 2019. These will include international events meant to broaden the discussion of Finnish literature, as well as domestic and regional discussions about how to better capitalize on the guest of honor opportunity.

“The goal is to engage in dialogue, not just promote our books.”Tiia Strandén

“The goal is to engage in dialogue,” said Strandén, “not just promote our books.”

The first of these events will take place at the Leipzig Book Fair on Thursday to Sunday (March 21 to 24), in cooperation with NORLA. They’ll hold a joint panel discussion about children’s books, the importance of literacy, and the near-universal challenge of competing with online media for kids’ attention. The event takes place Thursday at 11:30 a.m. at the Nordic collective stand (Hall 4 C400).

Next will be an event on translation at Helsinki Lit, a literary festival in the capital city running May 17 and 18. Haarala said that apart from the big commercial books, sales of translations are struggling in Finland. FILI wants to remind readers why translations are important. Speakers include Philip Gwyn Jones, Juergen Boos, and a Swedish translator.

And, of course, FILI also has plans for events at the Frankfurter Buchmesse this year. They’ve reserved a two-hour slot in the Frankfurt Pavilion in the Agora to talk about “what kind of difference it has made for us” to have been a guest of honor, said Strandén. The event is to be moderated by Roman Schatz, a German-born journalist and author now living in Finland.

Toward the end of the year, FILI will co-host a conference with organizers from Sweden and Noway to talk about strategies for exporting literature abroad and how guest of honor countries can work together to “build a good structure for the future,” said Strandén.

Between and around these special events, Strandén and Haarala said they’ll also continue with their ongoing work of attending international events on behalf of Finnish publishers to promote titles to foreign publishers. Additionally, FILI organizes editors’ trips and administers translation funding.

This work is increasingly important in Finland because, as Haarala told us, the number of literary agents is declining, in part because of consolidation—like the merger of Bonnier’s Swedish and Finnish rights departments.

Strandén added that the only Finnish publisher with an in-house rights director is Siltala—and they’ve had their hands full with the recent right success of their Kimi Raikkonen book.

In recent years, Strandén said that FILI has made extra efforts to work with Finnish publishers to identify titles from their lists with the most foreign rights potential and promote those titles at book fairs.

Often, Strandén said, foreign publishers will consult with FILI about a title they heard about from an agent, as a kind of second opinion on the title’s suitability for translation. Some rights sales are, she said, “directly because of our enthusiasm” for a particular book.

Overall, looking at FILI’s lineup of plans for 2019 and some of the recent rights deals they’ve helped achieve, Haarala said, “I’m happy!”