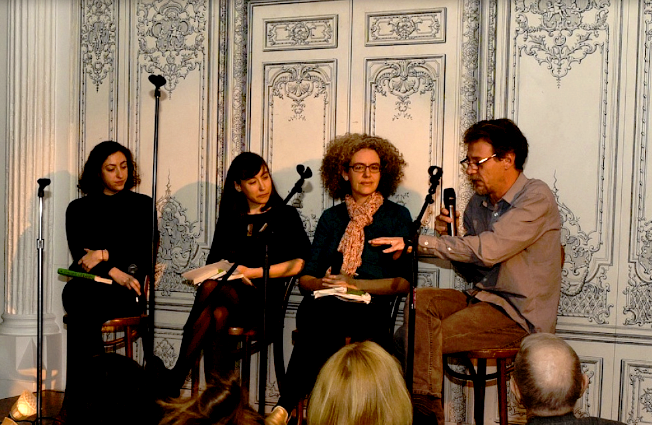 This year’s Festival Neue Literatur, with its focus on memory, has asked participating writers to look at what memories mean in their work and in the world of their careers.

With this weekend’s 10th anniversary Festival Neue Literature (March 29 through 31) in New York, Publishing Perspectives is glad to have the commentary of three of the event’s chairman and three of the writers taking part–in a year when the theme is, pertinent to a decade’s festivals, “In Memory We Trust.” 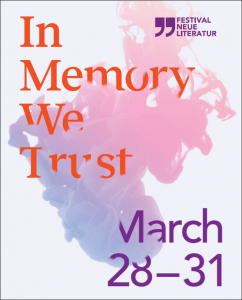 The American writers chosen to work with the German speakers are Min Jin Lee and Jenny Zhang. You can learn more in our coverage here about all eight of these writers, who are appearing in programming that this year is curated by the literary critic, writer and translator Liesl Schillinger and Tim Mohr, the German-language translator and author of Burning Down the Haus.

Later in this article you can find a listing of the five public events of the Festival Neue Literature. Each event is free of charge but requires an RSVP because of limited seating, so it’s recommended that you choose the parts of the program that interest you and use the site’s Events tab listings for the event(s) of your choice to make your registration.

Needless to say, the concept of the festival’s theme, “In Memory We Trust,” has special gravity for many in the States and in Europe who see the contemporary political landscape as ground now badly softened–ethically, politically, and morally–by some of the most challenging elements of nationalism and isolationism seen in contemporary times.

We hear now from three of the program’s German-language writers–Emminger, Jarawan, and de Velasco–and the show’s chairman, John Wray.

‘What You Remember Is What You Think’

Publishing Perspectives: What does the theme ‘In Memory We Trust’ mean to you? 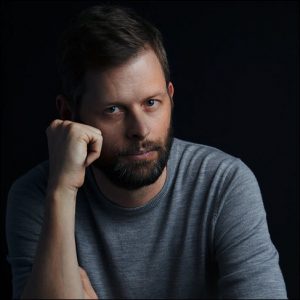 John Wray: Every day, in the news and in our very individual, very fallible personal lives, we’re reminded of the vital importance of memory, and of the disastrous consequences of refusing to learn the lessons it reaches. In the German-speaking world, especially, the dangers of forgetting are widely acknowledged, and very much a danger. But memory itself, both individually and culturally, is far from infallible. Is there any more fundamental human conundrum?

Daniela Emminger: Memories in general are a very important thing. They’re valuable, something of worth and strength. Memories affect all of us. They’re part of ourselves, they make us the person we are, they’re our identity. It´s important to reflect on them. As, for example, my protagonist Samat does in Kafka With Wings.

He’s half-Kyrgyz, half-Austrian and at the age of 18 decides to travel to Kyrgyzstan in order to find out more about his past, to dive into the Kyrgyz heritage. He wants to find his father, the Kyrgyz part of his family, because he feels incomplete, like a half-person. In a way, he’s striving for memories. And I share his point of view: What you remember is what you think. What you think defines what you do. And what you do is who you are. “In Memory We Trust” is a very strong and present theme.

Pierre Jarawan: Scientists tell us that memory is something we cannot trust. But with memory playing such an important role in creating an identity, this leads to the question of how we can be sure of who we are, if who we are is built on false or unreliable memories? This becomes even more important when it comes to something like a “collective memory.”

For example, in Lebanon, where my novel is set, 18 religious communities took part in the Civil War (1975-1990). Today, there’s no history book that includes these years, because there’s no official version of the war. They simply cannot agree on one version because they all remember it differently.

So I consider myself very lucky to be part of a festival with such an interesting theme.

Stefanie de Valasco: Memory is also a very tricky thing. We always remember what we want to remember, this is how humans work psychologically. It was a constant challenge for my last novel. When I started, I realized how many black spots I have in my mind about the time I wanted to write about, I thought, okay I won’t do it, this is too scary. But I couldn’t, so: try to remember, try to remember, was a constant mantra during the first year. Memories can be painful, but it’s our duty as writers to talk about the uncomfortable and disturbing things in a “beautiful manner”–to make literature out of it.

‘The Themes That Bother Me’

Publishing Perspectives: Where do you get the inspiration and/or ideas for your writing? 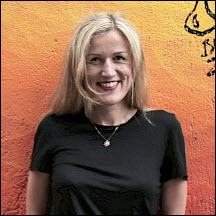 Daniela Emminger: In general, I carry the  themes that bother me inside–sometimes it even takes them years until they come to fruition. My work often deals with “the essentials of life”–love, evanescence, transformation, courage, grief, or the search for meaning. The main source of my ideas is my own experience, my own emotion and understanding of the world. Also external sources and influences–a poem I read, a conversation I hear, a person I meet–intentionally play a certain role.

I’m also fond of mixing genres. In my mind, sometimes a fairy tale perfectly matches with facts and figures, with real things going on in the contemporary world.

Pierre Jarawan: There are many ideas that appear spontaneously while writing and that can completely change the idea I’ve started with. I’d say,

I get my inspiration from looking at things with open eyes and an open mind. And of course, being half-Lebanese, my personal background plays a role as well. Stories are everywhere, but sometimes it can be hard to recognize them as stories.

Stefanie de Valasco: I have no formula for inspiring writing ideas and/or inspirations. I constantly have ideas, but just a few have enough weight that it’s worth to write a novel out of it. First I need to believe in an idea to be interesting, not just for me but for many readers, but then also it has to be something I’m very interested in, since it takes a while to write a novel.

I’ve been working six years on my last novel, and I never got bored. Hopefully the readers won’t either.

‘The Way You Look at Things’

Publishing Perspectives: What do you hope US readers get from your work? 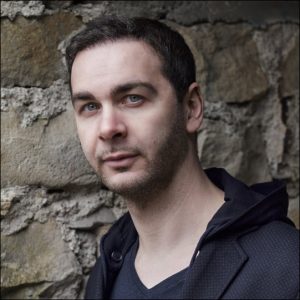 Pierre Jarawan: I see it this way: If readers consider my book only entertaining and suspenseful, and they have a nice time reading it, I’ll be perfectly happy. But of course, I think that there is much more to it and that you can learn a lot about Lebanon and the Middle East through the novel, but also about the difficulties, refugees might experience in the countries they migrate to. I think, that stories like these have a secret super power: while numbers and statistics go to the head, stories can go to the heart and there they might change the way you look at things.

Stefanie de Valasco: I wanted to write a book about religious fundamentalism in a white middle class culture/society. Europe is very proud of its secular societies as a product of enlightenment and there’s a lot of control against everything that questions so called European values, which is a part of European identity.

I wanted to give the readers a glimpse of how it is to grow up in a Christian fundamentalist group, and I wanted to let everybody know that these groups and the tragic consequences for a lot of members exist in a so-called “secular” society. I also wanted to show the ambivalence of resistance and martyrdom of the Jehovah’s Witnesses, and how strongly it’s intertwined with Nazi Germany and the further communist regime.

Daniela Emminger: I’d prefer not to just talk about US readers but about readers, period. Of course I want people to read my book. It offers a unique insight into the strange and adventurous Kyrgyz culture. I want them to be open-minded when it comes to different cultures and ways of living that are beyond their own. I want them to learn something about the past and how it influences our present. I want them to become curious about different people and places that they may not understand.

In fact there are a few characters in my book that might resemble real and well-known American persons–world leaders, reality stars, Hollywood stars. But of course they could also be from other parts of the world. So this is open to interpretation.

‘This Novel Was Such a Struggle’

Publishing Perspectives: What are you working on next? 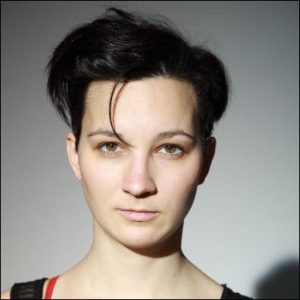 Stefanie de Valasco: I have no idea. Something easy and fun, since this novel was such a struggle.

Daniela Emminger: I’m working on a play about Braunau, Hitler´s birthplace, and the latest right-wing populistic tendencies in Austria and Europe. It’s  a political play.

This sounds very serious but in fact it will be quite entertaining. Let’s name it a dark comedy, a mixture of comedy and tragedy if you want. I didn’t want to write another piece about Adolf Hitler. I think the world is done with him and his cruelty. So the focus of the play is a more contemporary one that deals with the monsters and cruelties of the present.

This might sound a little bit weird now, but I bought myself a gorilla costume. And every time I work on the play I jump into it. … I use it as a uniform, like a doctor his scrubs or a waitress her apron. On one hand, the costume helps me to keep a distance from the crazy Nazi stuff. On the other hand, there’s plenty of space in it to lock up the right-wing populistic thoughts and tendencies. It’s like they’re in prison, so  I can reflect on them in a safe and concentrated way.

Gorillas, like apes in general, are very intelligent animals. So I hope the aura of the gorilla costume will help me find a humane solution to the present and ever-increasing Nazi problem.

Pierre Jarawan: I am working on Novel No. 2, which will be published in Germany next year. It will also be about Lebanon, but it’s not a sequel.

Events in the 2019 Festival Neue Literatur

Saturday, March 30, 6 p.m., The Powerhouse Arena (28 Adams Street, Brooklyn)
Another Country: Distant Lands Up Close and Personal. How does the interplay of geography and time alter the identity of a person, a character, a city, a nation? With Daniela Emminger, Pierre Jarawan, Dana Grigorcea, and Min Jin Lee, moderated by Liesl Schillinger.

Sunday, March 31, 2 p,m., Deutsches Haus at NYU (42 Washington Mews, Manhattan)
The Author’s Voice. The six German-language authors pair with NYC actors to give a sampling of their work. Moderated by Tim Mohr, with English excerpts read by actors Adelind Horan and Robert Lyons.

Each year, the festival publishes the FNL Reader, a booklet featuring English-language excerpts of the featured German-language works, often marking the first appearance of these texts in English. The 2019 FNL Reader will be available for download in March in an electronic version on the festival site.