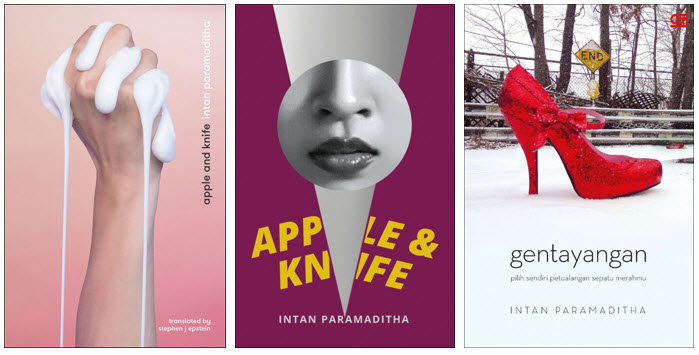 An interest in ‘how women reframe stories in a feminist framework’ and more was part of the discussion in a Market Focus Indonesia panel at the London Book Fair earlier this month. 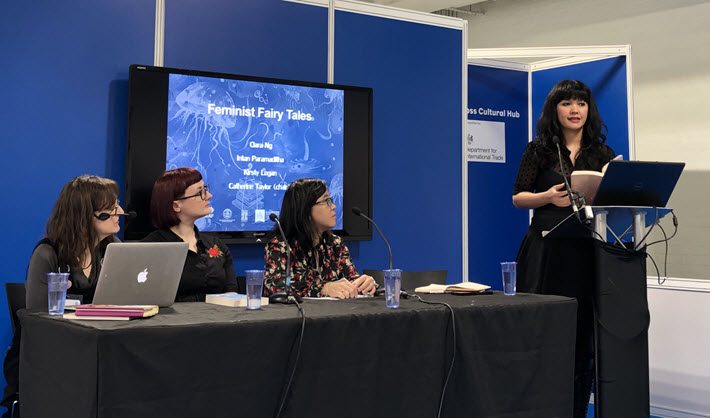 ‘They Tried To Ban My Work’

During the London Book Fair, an Insight Seminars panel titled Feminist Fairy Tales was packed, but with only a few men in sight.

The program was part of the fair’s Market Focus Indonesia programming and was moderated by writer and editor Catherine Taylor. Appearing with Taylor were Sydney-based Indonesian author Intan Paramaditha; Indonesian writer Clara Ng, who lives in Jakarta; and Glasgow-based novelist Kirsty Logan.

The session opened with a reading by Paramaditha of “Blood”—about menstruation and shame—from her short story collection, Apple and Knife, published in English by Brow Books and Harvill Secker in a translation by Stephen J. Epstein. Paramaditha is known for giving a capricious, feminist twist to gothic ghost and horror stories, and fairy tales.

Two covers for Intan Paramaditha’s ‘Apple and Knife’ in Stephen J. Epstein’s translation. On the left, Brow Books’ edition, in the center, Harvill Secker’s cover; and her ‘Gentayangan’

“I always loved fairy tales,” she told the audience, “and was influenced by women’s writing. I’m interested in how women reframe stories in a feminist framework.” She said that when she was studying at the University of Indonesia, all her professors were feminists. Her thesis was on Mary Shelley’s Frankenstein.

Clara Ng, who writes novels, short stories, and children’s books that include a retelling of Alice in Wonderland, said that when she was studying in the United States, she encountered a book that would change her outlook forever because it got her thinking about gender pronouns—the Indonesian language doesn’t differentiate between male and female for personal pronouns. The book was the late American author Shel Silverstein’s The Giving Tree, in which the tree is female.

From left, Clara Ng’s ‘Dru and the Tale of Five Kingdoms’ with illustrations by Renata Owen; ‘All Women Have Affairs & Other Stories’; and Shel Silverstein’s ‘The Giving Tree,’ which Ng says influenced her

“My feminist consciousness emerged slowly,” said Ng, describing how, as she increasingly began to write books for children, she realized that feminist literature in Indonesia was nonexistent.

“There are lots of children’s books that give instructions on how to behave. Most are for girls, on how to behave well and be good to their parents and teachers. … I get pressure from the marketing people at my publisher to write these kinds of books. I refuse. I write other [kinds of] books.”

Ng rewrote a traditional tale for children about a deer, for example, in which in the original version the deer is male. She made it genderless. Ng said that in her writing she tries to counter “male domination in children’s books in Indonesia,” and that she wants to educate teachers as well as children. One of her collections of short stories published in English by the Lontar Foundation and translated by Pamela Allen and Jörn-Holger Spröde is called All Women Have Affairs & Other Stories. 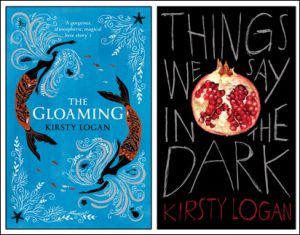 Kirsty Logan’s ‘The Gloaming,’ left, and her forthcoming ‘Things We Say in the Dark’

Kirsty Logan, who writes in a fantastical way about women and her experiences as a woman, recounted how as a child the stories she read were wide-ranging—from fairy tales to Egyptian myths and biblical stories.

“Nothing was ever off-limits,” she said. “Things are usually sanitized for children. But the Bible stories were gory, Egyptian myths were full of incest and violence, and most fairy tales are quite dark.”

If you think about it, said Logan, the “happily ever after” ending is “okay for one character, but it doesn’t necessarily end well for others. Traditionally, women in stories must be beautiful, perfect, but it must be effortless.” Logan said she’s interested, however, in female violence and physicality.

‘A Growing Understanding Among Men’

Catherine Taylor asked participants how their work has been received by the public.

Ng said there’s “tension” coming from her audience and that she’s seen as an activist. “I’m branded in Indonesia as a writer who doesn’t believe in morality for children, [even if] it’s not true. Some accuse me of talking about LGBT [themes]. They tried to ban my work.”

Logan said she was surprised at how many of her readers are men. “There’s a growing understanding among men that patriarchy is damaging for them as well. It would be nice if it grew faster but it is growing.”

Her forthcoming book is a collection of horror stories called Things we Say in the Dark. “It’s about female feminist fears and it’s quite horrible.”

More from Publishing Perspectives on women and women in publishing is here, and more on Indonesia is here.