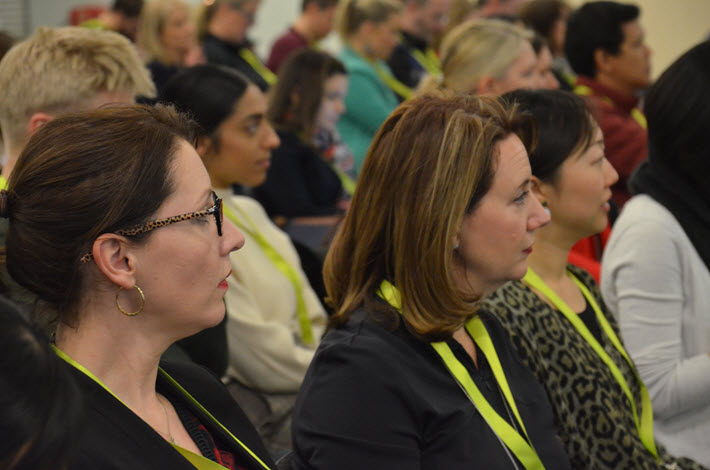 Core values, the essential relationship of author and publisher, and the importance of reading anchored the morning and afternoon of London Book Fair’s 2019 Quantum. 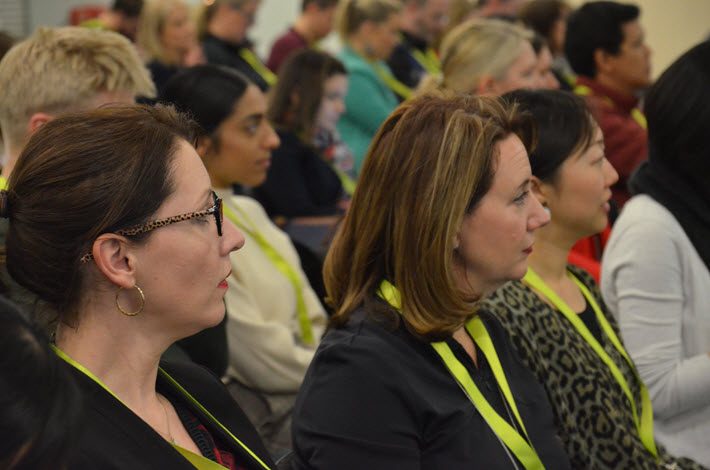 When ‘Publishing Is Political’

With its knees-up tag line “Aligned Creativity: Informed by Insight,” the program was able to accommodate a stage-roaming chat from futurist Alexandra Levit, an audiobook data update from Nielsen’s Oliver Beldham, commentary on books-to-film and even a conversation with The Beano’s Emma Scott.

And yet, a day before another potentially fateful vote in the British Parliament on Brexit, both Stephen Page, publisher and CEO of the 90-year-old Faber & Faber, and Morten Hesseldahl, CEO of Denmark’s oldest publishing house, Gyldendal, hit tellingly potent and thoughtful notes in their respective morning and afternoon keynotes.

The effect might be summed up in Page’s tautly delivered line, “Publishing is political. It mustn’t be party political, in my view, but it has to acknowledge that the act of making public ideas and stories is often a political act.”

Page: ‘What Are Our Responsibilities?’ 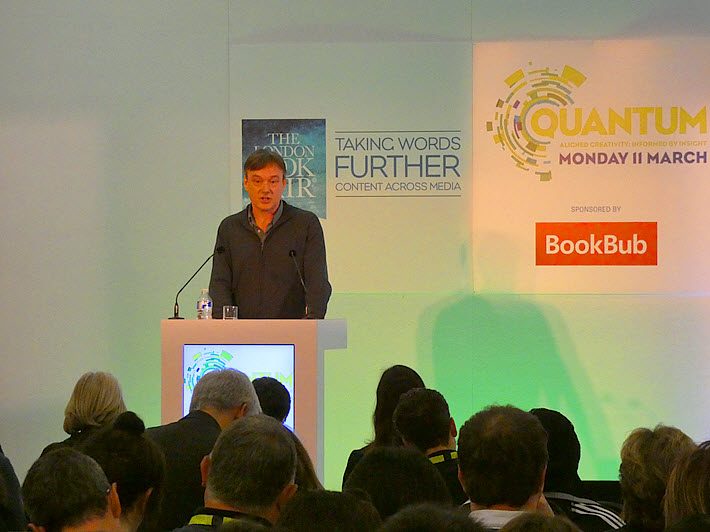 Basing his comments in the 1934 publication of Geoffrey Faber’s essay “Are Publishers Any Use?” (A Publisher Speaking, Faber & Faber), Page made it abundantly clear that the observations and musings of Faber so long ago were perfectly apt to today’s idiom and what he positioned as the fundamental directive to publishers: “to make good books pay.”

By that, Page (and Faber) meant that commercial drives sales interests can be antithetical to the actual mission of publishing—and that the undeniable need to prosper can too easily distract publishing’s players with the survivalist instinct and “the suppression of editorial points of view.”

“I believe,” Page said, “that to succeed now and in the near future, publishers need to master new expertise but must also renew older skills.

“We also need to be clear that we are not the whole story, the story is the writing and the writers, and role is to create commercial and cultural value for them. So we need to assess the places where we offer unique value today, and concentrate our efforts in these places.

“We need to renew our balance, and assert our convictions and understanding of our place in the world of reading and writing.”

Less frequently discussed in publishing these days, “art” came back into the debate in Page’s remarks. He cited Faber as having said, “A publisher must produce something that is, in its way, a work of art,” and turned this to his own emphasis on design.

“There’s been a resurgence of freedom for designers over the last decade,” Page said, “with publishers rediscovering their artisanal instincts with the full encouragement of the book trade. Think of Polpo, of Fitzcaraldo’s austere aesthetic, of the beauty of The Essex Serpent, and of the rise of limited editions and multiple formats at different prices.

“This new approach to physical books is in part a response to digital. To make ownership of books seductive publishers have had to think hard about how to make use of print technologies to excite booksellers and readers.”

While hardly ignoring the commercial imperative—”Over the coming years, where who knows what will happen to our high street post-Brexit, publishers must remain committed to sustaining a bookselling presence on the high street”—Page repeatedly returned to his mission, to the work and how its authors are treated and how their concepts are presented.

“I believe that all publishers have responsibilities beyond their own bottom line,” he said, “and all individuals in publishing must acknowledge their responsibilities towards culture and society. That means publishers large and small standing firmly together in the UK to build a market that is fair and both good for business and also responsible toward our culture.

“To do that may take some courageous individual leadership,” Stephen Page said, by way of demonstrating exactly that. London Book Fair is, after all, a trade show, with its heart in  its rights center and its commerce at the fore.

“We must be courageous in many ways,” he exhorted his colleagues.

“We need to be open to this new generation, to give them their head, to undo hierarchies that might thwart them. We need to have the courage to fight for the values we believe in—freedom of speech, respect for ideas and intellectual life, for copyright and the right for an artist to make a living, and for our local market.

“We need to put writers first and partner with them beyond the commercial.

“And we must remember that what we do matters, and because of that we have to act responsibly. To achieve this we need to be clear about the things we can do uniquely in the worlds of reading and writing.” 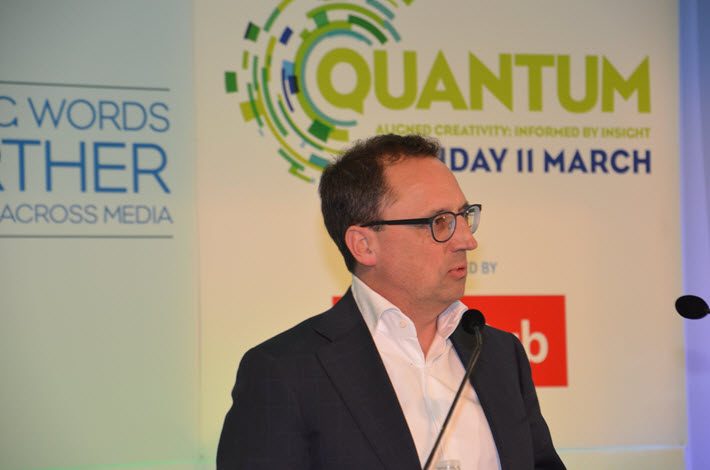 Hold fast to the nobility of what you are doing, might summarize the first of Danish publisher Morten Hesseldahl’s guidelines for the future.

“I want to reinforce the most fundamental point of all: reading is fundamental,” he said during his afternoon keynote.

“The book industry is about more than a set of products designed to turn a profit. We have a higher mission, and a number of powerful allies willing to help us achieve it: parents, teachers, politicians, and anybody else who believes that the spread of knowledge and education is vital to future success.”

Hesseldahl added that it is the content of books that’s important, not the format. Digital or print is not the point.

“This means that author contracts,” he said, ,”should deal with the transfer of distribution rights in their entirety, not just in part. They should also steer clear of the term ‘printing,’ since print-on-demand and digital distribution have made the concept of a print run meaningless.”

Hesseldahl said he believes the use of large-scale distributors has distanced publishers from their end-users, and thus he thinks it’s essential that publishers “maintain direct contact with end-users. We must own—either wholly or in part—physical shops, digital sales platforms and/or book clubs.”

“This is exactly what has happened with television and film distribution as well as in the retail sector more broadly,” he said, speaking with the experience of a man who has returned to publishing after a stint as a television executive.

“Here I’ll mention Netflix again,” he said, “which currently has a budget of US$13 billion to spend on content.”

He stressed the importance of growth, adding that without it, “Our margins will increasingly come under pressure, and we will continue to witness a phenomenon that has been all too common in the publishing industry over the past 25 years: instead of expanding the market, the bigger companies buy out the smaller ones, to the ultimate benefit of—nobody.”

For this reason, Hesseldahl said he believes it’s vital to seek growth elsewhere, but without falling into the trap of entering markets that are too distant from publishing. “We want to create new businesses, not come across as dilettantes.”

His fifth of six guidelines was that it’s crucial for publishers to form alliances across their own industry and others.  Publishers need to realize that they have more in common with their closest competitors than with, for example, the new multinational giants.  “We need to realize that alliances with top professionals in other industries will stop us behaving like amateurs.”

His final guideline was the importance of working strategically.

“To put it bluntly,” he concluded, “there’s a pervasive sense that we don’t need to change, even though the rest of the world is changing; equally, it’s often taken for granted that such things as professional management are best avoided.

“This is a mistake. Professional management and strategic thinking have never been more important to the book industry than they are right now.

“It may be that we don’t need to change at all, even though everybody else is. But this will make it almost impossible to make informed choices when we are inevitably affected by these broader developments.

“We will find ourselves irresolute,” Morten Hesseldahl said, “like Alice in Alice in Wonderland: “One day Alice came to a fork in the road and saw a Cheshire cat in a tree.

“‘Where do you want to go?’ was his response.