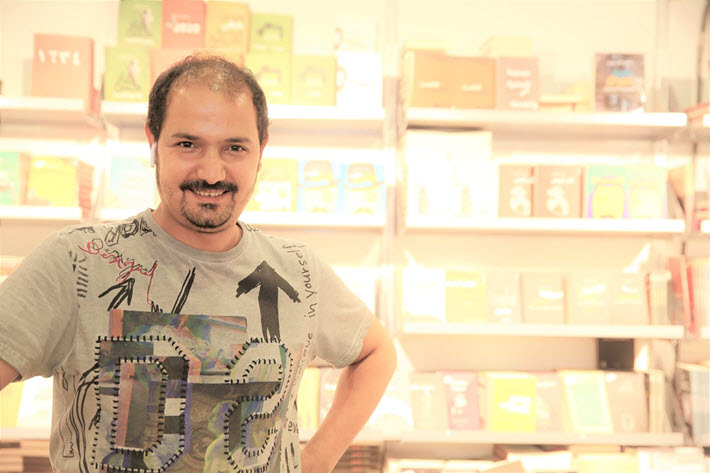 ‘Maybe war literature these days; something serious and universal’ is his key focus, says the busy publisher of Al-Mutawassit’s highly regarded Arabic books. A typical print run is 1,000 copies. 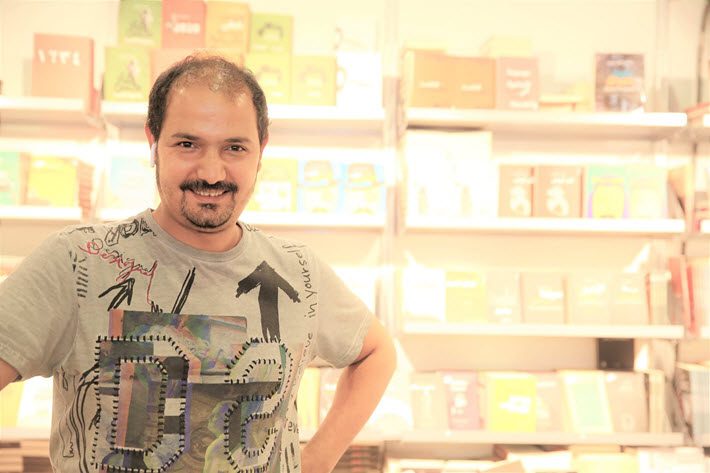 ‘The Sea in Between’

In any conversation about contemporary Arabic literature and publishing the name Al-Mutawassit seems to come up, particularly in the spring as the Abu Dhabi International Book Fair approaches—this year set for April 24 to 30.

Established in 2015 in Milan, Al-Mutawassit publishes contemporary Arabic literature and poetry as well as international literature in Arabic translation.

Khaled Soliman Al Nassiry, the man behind Al-Mutawassit, says that he has multiple interests, from his professional roots in graphic arts and journalism to film and poetry. The Damascus-born Palestinian-Syrian studied graphic design and worked as a typographer and graphic designer for a publisher, and then as a journalist focusing on culture. He organized poetry and literature festivals in Syria with a Swedish cultural association and then moved to Italy in 2009 to be with his girlfriend, now his wife. 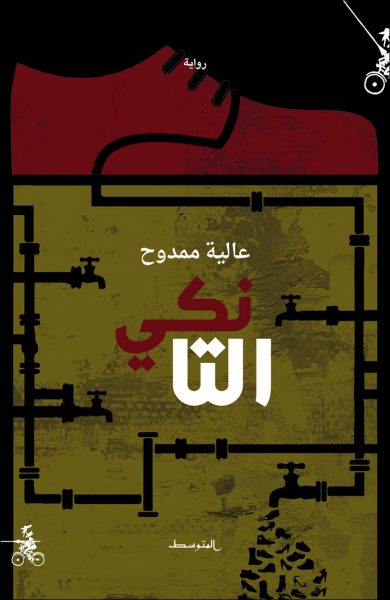 He studied Italian and began to work with the now-defunct bilingual Arabic-Italian magazine, Al Jarida, as editor-in-chief for the Arabic articles. The magazine focused on immigration, and Al Nassiry says it was the first time he had explored the issue. What he learned served him well as he went on to co-write, direct, and take part in the 2014 prize-winning documentary Io Sto con la Sposa (On the Bride’s Side) which addresses the issue of migrants in Europe fleeing the war in Syria.

He then honed his skills working as the editorial director and graphic designer for Noon Publishing in the United Arab Emirates. When it closed, Al Nassiry used the proceeds from his film to launch Al-Mutawassit. The name comes from Al Bahar Al Mutawassit, which means “the sea in between,” the term in Arabic for the Mediterranean Sea.

“I can’t really call it a publishing house,” says Al Nassiry. “It’s more like books that you love and want to publish. We translate many books from other languages, but mostly we publish fiction and poetry in Arabic. A person who publishes poetry by Arab authors and translated fiction is not involved in a commercial business. But this is the kind of project I love.”

Al Nassiry publishes authors including Dunya Mikhail, whose book In the Sabaya Market is known in English as The Beekeeper: Rescuing the Stolen Women of Iraq. Translated by Max Weiss and the author, it tells stories of women kidnapped by ISIS. 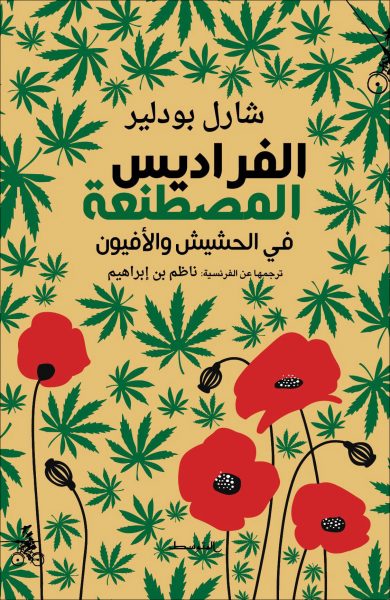 He also has published Mazen Maarouf and his collection of short stories The Rats That Lick a Karate Champion’s Ears. The English edition of a different collection of Maarouf short stories, Jokes for the Gunmen, is just out in a translation by Jonathan Wright.

Al Nassiry published Hassan Blasim’s award-winning The Iraqi Christ, which was released in English by the UK’s Comma Press, translated by Jonathan Wright. Ra Page, Comma Press’ founder and editorial manager who was recently on a panel with Al Nassiry for publishers and translators organized by the Palestinian Translation Forum, says about Al Nassiry, “There are few people in publishing taking quite as many risks and working at such speed and with such dexterity as Khaled. He builds links, brings people together, constructs impossible projects and then delivers on them. He’s like an Arabic Philip Henslowe,” the 17th-century British theatrical entrepreneur, “always investing in the right projects at the right time.”

It’s hard to imagine how Al Nassiry manages, given that until very recently he ran his business on his own, publishing up to 100 books a year, he says.

“Until four months ago it was just me reading the books, deciding, correcting them, designing the covers, following the printing, and going to the book fairs.” Admitting that he works an average 20 hours a day, he says, “I am lucky, I don’t need to sleep a lot.”

“A person who publishes poetry by Arab authors and translated fiction is not involved in a commercial business. But this is the kind of project I love.”Khaled Soliman Al Nassiry

Al-Mutawassit books are published in Beirut and are sold on major Lebanese sites such as Jamalon or Neelwafurat. But the rest of the time, like most Arab publishers who are also their own distributors, Al Nassiry travels to all the major book fairs in the Arab world. “To survive you have to go to all the book fairs and sell yourself.”

He says he gets some grants from Denmark and Sweden but has still not figured out how to go about getting Italian grants, even though he publishes Italian authors such as Alessandro Baricco in Arabic alongside more classical Italian titles—Carlo Collodi’s Pinocchio and Giuseppe Tomasi di Lampedusa’s Il Gattopardo (The Leopard).

Al Nassiry says that, like him, his translators have yet to access Italian funding. One Italian book he’s done well with is Giuseppe Catozzella’s Non Dirmi che hai Paura (Don’t Tell Me You’re Afraid), which tells the true and sobering story of the Somali Olympic runner Samia Yusuf Omar. Al Nassiry is on his second edition of the Arabic version and says that a typical print run is 1,000 copies.

‘We Come From Countries at War’

For his contemporary books in Arabic translation, Al Nassiry looks for new names from other countries that are unfamiliar to readers. “You think about how this book and the story could work for the Arabic reader. It’s an adventure, you have to believe in it, and you have to have a sixth sense.” 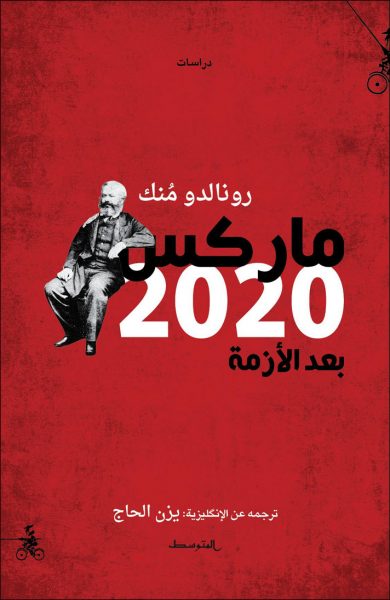 In Arabic fiction and poetry, he looks for “high quality literature. We come from countries at war,” he says, “So maybe war literature these days; something serious and universal.”

When Al Nassiry goes to book fairs, he enjoys meeting readers who praise not only the literature but also the quality of the publications and mostly the cover designs, which are often neglected in the Arab world, he says.

Marcia Lynx Qualey, of the site Arablit, commenting on Al Nassiry’s graphic design, tells Publishing Perspectives, “In addition to genre-breaking authors, Al-Mutawassit has some of the most consistently exciting cover designs in the business. The jacket of their translation of Symphony of the Dead, originally in Persian, was so striking that I remained frightened weeks after seeing it.”

Al Nassiry says he wants to slow down to leave more time to get involved in poetry and cinema, although slowing down seems out of character. Al-Mutawassit will be designing and distributing a new poetry magazine Bara’at (Innocence) which will launch Thursday (March 21), for World Poetry Day.

More from Publishing Perspectives on Arabic literature is here, and more on translation is here.

A version of this story appears in our Spring Magazine, which is ready for your free download following the London Book Fair—where trade visitors found the print edition available, also free of charge.

Read up on the issues and players important at the London Book Fair and at other major fairs of the season this year, plus an early look at key points interest about the coming Frankfurter Buchmesse (October 16 to 20).