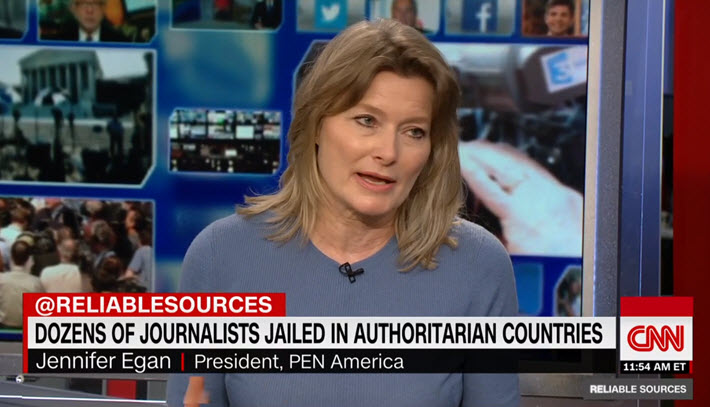 Ahead of PEN America’s literary awards night, the organization’s president Jennifer Egan tells CNN, ‘I feel like the next phase is going to be an engagement with the truth.’ 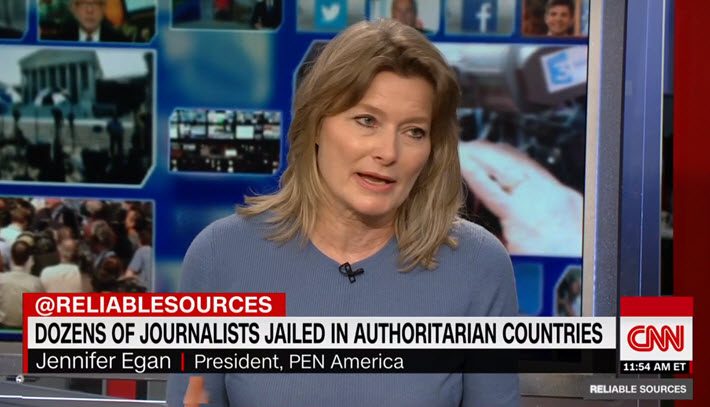 In many cases, literature can help draw attention to societal problems and political issues. But in recent appearances in mainstream news media, the PEN America leadership has been reversing that pattern, getting out ahead of its literary awards program with current affairs commentary on the air.

On Tuesday evening (February 26), PEN will hold its annual literary awards program at New York University’s Skirball Center. The list of honors is long and, in the aggregate, it will confer 22 awards, fellowships, grants, and prizes worth a total of more than US$370,000 in winnings. Categories among the literary awards range from debut short story collections to works by authors of color; from poetry in translation to essays; from biography and nonfiction to literary sports and science writing.

Additionally, there are “nomination awards,” and in those cases, we know already that they will be led this year by the Mexican-American author and poet Sandra Cisneros as recipient of the 2019 PEN/Nabokov Award for Achievement in International Literature, a prize that comes with $50,000. In 2018, the winner of the PEN/Nabokov was Margaret Atwood.

You can learn more here about the winners of this year’s “nomination awards” which will see not only Cisneros collect the Nabokov but also:

All of these recognitions and their importance will have been heralded by news.

We’ll follow with the many shortlists of finalists for the literature awards below.

Another prize that helped generate a media appearance over the weekend is the PEN/Barbey Freedom To Write Award, normally announced at the organization’s gala later in the spring.

“The point of imprisoning a journalist is, plain and simple, to try to silence that person.”Jennifer Egan

The honor was won last year by the imprisoned Myanmar reporters Wa Lone and Kyaw Soe Oo, accused of violating Nay Pyi Taw’s official secrets act. In the prior year, 2017, the imprisoned Ukrainian writer and filmmaker Oleg Sentsov was named to receive the PEN/Barbey.

On Sunday (February 24), PEN America’s current president, Jennifer Egan, was on CNN’s Reliable Sources (you can see the full segment here), telling John Avlon who hosted that “Because there’s this increase in the persecution of journalists, it feels ever more important to do what we can to try to shine a light on those cases. The truth is that it can work.

“The point of imprisoning a journalist is, plain and simple, to try to silence that person. So if we create enough of a ruckus it becomes more uncomfortable to leave that person in prison than to release him or her.”

Of the last 42 winners PEN has named to its Freedom To Write Award, 37 have been released from detention.

“I think we’re seeing the end of an old order,” Egan told Avlon on Sunday.

“Suppression of the truth just seems like an impossible and outdated approach. If you look at something like climate change, it’s happening. You can deny it all you want, [but] we can all see it around us.

“I have so much faith in human ingenuity and American ingenuity that I feel like the next phase is going to be an engagement with the truth and a responsiveness to it, rather than an effort to flatten it out and eliminate complex thought.”

On February 10, PEN CEO Suzanne Nossel appeared on CNN’s Reliable Sources with security analysts Juliette Kayyem and Sam Vinograd, and explained that the bipartisan demand for an explanation for Washington Post columnist Jamal Khashoggi’s murder from the White House falls under the Global Magnitsky Act.

That legally requires Donald Trump, in PEN’s media messaging, “to determine which individuals the US government has found to be responsible for any gross violation of Jamal Khashoggi’s internationally recognized human rights and state whether he [Trump] intends to impose sanctions on them.”

“There’s an outcry. And I don’t know how long the administration is going to continue to stonewall.”Suzanne Nossel

On Reliable Sources, Nossel pointed out to host Brian Stelter that the administration had been supposed to file its report on February 8, but instead, “They abdicated, they said, ‘We’re ignoring this,’ essentially violating the law. It’s a standoff.

“The world is demanding accountability. This case struck a nerve. I think it was the bone saw. I think it was [Saudi crown prince Mohamed bin Salman’s] involvement with people like Jared Kushner and Sergey Brin. For MBS to be personally implicated and yet no response, it’s just not sitting well on the Hill, and it’s not sitting well with the American public.

“There’s an outcry. And I don’t know how long the administration is going to continue to stonewall.”

In her comments (you can see the full segment here), Nossel also noted that Jeff Bezos’ allegations of attempted extortion by American Media, parent company of the National Enquirer, were of special concern because they referred to an alleged effort to stop publication of news material protected by the First Amendment.

PEN’s formal statement on the matter issued earlier this month, read, in part: “By failing to meet Congress’ deadline for a report on the Khashoggi case, the Trump administration has demonstrated once again its abdication of leadership in defending internationally recognized human rights.

“The president and his administration either do not understand the dangers of allowing Saudi Arabia to get away with such a heinous act in violation of international law, or they do not care.  Or, in the worst case, they are actively trying to shield the Saudi Crown Prince Mohamed bin Salman from accountability for an assassination the CIA has concluded the crown prince ordered,” as reported by the Washington Post’s Shane Harris, Greg Miller, and Josh Dawsey.

“PEN America continues to call for an independent, international investigation to lay the groundwork for accountability.” 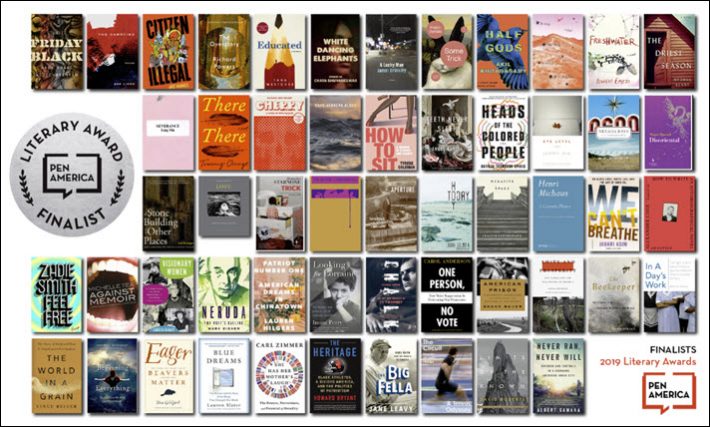 This honor is for a book-length work of any genre for its originality, merit, and impact.

This award is given to an author whose debut collection of short stories published in 2018 represents distinguished literary achievement and suggests great promise.

PEN/Hemingway Award for a Debut Novel

This prize is for a debut novel published in 2018.

This award is for a book-length work of any genre by an author of color, published in the United States in 2018.

This award honors a book-length translation of prose from any language into English published in 2018.

This prize recognizes a book-length translation of poetry from any language into English published in 2018.

This prize recognizes a book of essays published in 2018 that exemplifies the essay form.

This nod goes to a distinguished biography published in 2018.

This award goes to a book of general nonfiction published in 2017 or 2018.

This prize honors literary excellence in a book on the subject of the physical or biological sciences and communicates complex scientific concepts to a lay audience.

This recognition honors a nonfiction book on the subject of sports published in 2018.

The comedian Hari Kondabolu is to appear as the host of the awards ceremony on Tuesday.